By the morning of February 3, Riobamba is back to looking like it does the rest of the year… The Pases del Niño (Christ child parade) that fill the streets during with the color and dance for two months are, finally, over.

Hundreds of people flooded the streets to turn sidewalks into twisting, turning rivers of dance and flair, with psychedelic masks and unique characters, who seem bewildering at first sight. “Dogs” with woolly, spiky ears and long, red tongues hanging out from their papier mâché snouts; “Police Officers” with dog masks (the clothes are actually donated by policemen); the “Clowns”; the “Sacha Runas” (forest people) with their green heads and disguises made out of leaves; the “Curiquingues”, bird/angels bowing from side to side; and the “Devils”, who represent sin not through promiscuity or mischief, but with a mirror in one hand, for they are the Kings of Vanity. One and all hit the streets to surrender to the Christ Child.

Between December and February Riobamba celebrates around one thousand Child Parades throughout the city. Historian Ignacio Ramos considers it the most Riombambeño tradition of all: “There is not a Riobambeño who has not had some kind of experience with a Pase, either participating in the actual parade or witnessing it transfixed by the spectacle. As soon as we hear the music, something moves inside of us,” he bites his lower lip and leans forward in his chair. 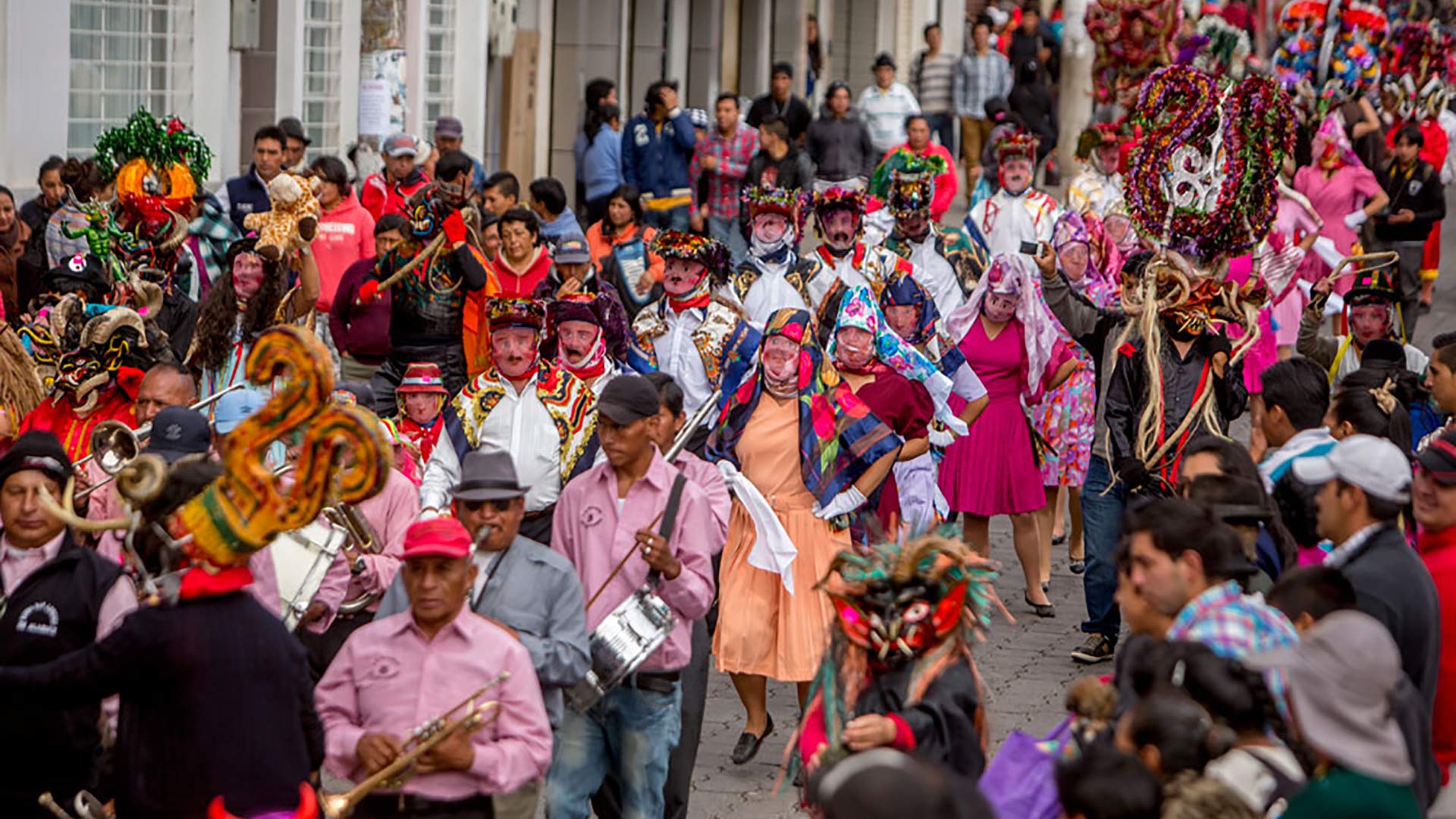 The arrival on horseback of the Three Wise Kings from the neighboring village of Tapi; the singular devils’ parade, with their rattles and their braids, which is perfected from year to year and handed down from one generation to the next in the form of an elaborate legacy; the lack of alcohol on the streets (perhaps the only fiesta in which this happens); the careful organization; or the sheer aesthetics of the costumes and masks… All these elements convince Ramos that this is one of Ecuador’s most exceptional cultural expressions… and the most elegant.

He suggested we visit the neighborhood of Santa Rosa, where the most emblematic of Christ Child Parades takes place in honor of the so-called “King of Kings”. He told us of the Mendoza family, “the custodians” of this religious icon. We shouldn’t leave the city without talking to them, he said. But first, we visited Eduardo Yumisaca, a young artist who is hired both to dress the dancers and, week after week starting early December, to dance with the comparsa (dancing troupe) he represents. His workshop, a 9-square-meter room that throbs to hardcore Andean thrash metal all day long, is filled to the brim with costume orders: hanging from the walls, lying across work tables and smothering the sofa. The masks, whose tinplate base is sealed with plaster, are decorated with colorful braids, devil horns and even LED lights. It’s a personal twist. Not all of Riobamba’s tin devils are this elaborate. The richest adornments are reserved, of course, for the Diablo Mayor… “He’s got to have it all,” says Yumisaca. On one of the walls, a poster depicts this character on a throne. “He leads our troupe and splits the crowd in two so that we can move along the street and strut our stuff.” According to his research, the Devils were originally characters from the Corpus Christi festivity, but such was the cult of the King of Kings in Santa Rosa that the organizers of the event wanted them to be part of their parade. Apparently, the devils then migrated from one celebration to the other and liked it enough there to stay.

Santa Rosa is a neighborhood known for its tinsmiths. Today, there are very few locales that sell the tin sprinklers and cans like in the old days. That’s not the case for the devil masks, though. Unlike Yumisaca’s work, in Santa Rosa, the tin is exposed, and the masks shine like mirrors. Some say that for each year a devil has danced, a new braid is added to the mask. It’s all part of the character: he who commits to truly paying tribute to the Christ Child as a devil must dance for seven years straight. “Seven years pays for your sins, you know!” 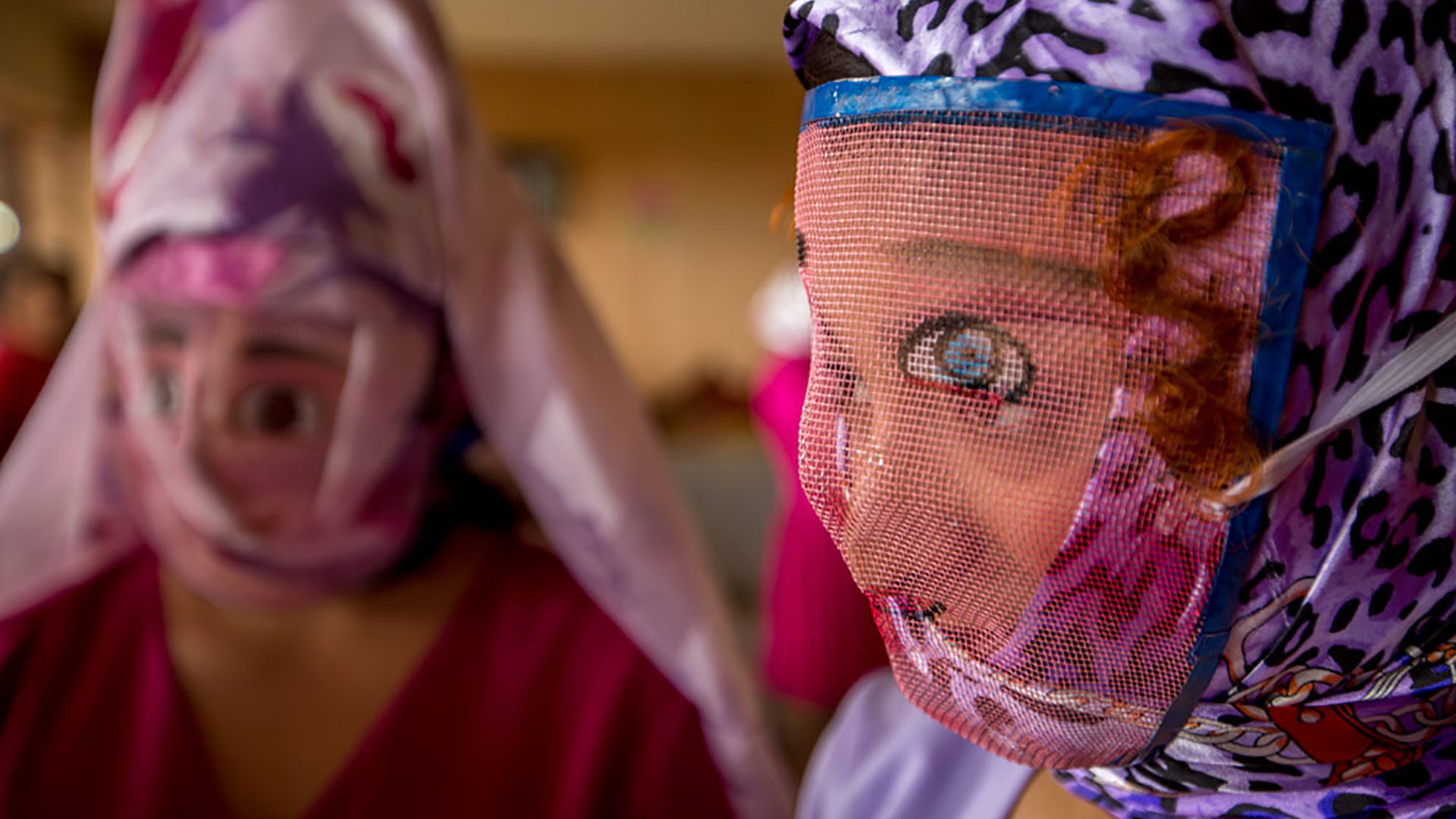 We can’t know for sure which came first: the designation of the new prioste (party organizer) for the following year’s celebration, or the celebration itself. On January 5, at 4:30 in the morning, the town band lashes out against the dawn’s silence with flaring trumpets and crashing cymbals, announcing to the Mendoza family that it is time to receive “las visperas” (the Eve of the Parade). The music and event itself share the same name: “albazo”, a veritable whack at dawn. At this criminal hour, Andean tunes hit the streets and the Mendozas walk sleepy-headed around the block carrying their Infant Jesus: a Colonial carving from the eighteenth century with penetrating blue eyes, delicate carmine cheeks and a face as smooth as porcelain. The Mendoza family are the icon’s sole custodians; and as such, they live with it and take it everywhere they go. Anybody is welcome to ask for a moment with the Child alone: you can call on their door or request in writing that the Mendozas place Him at the oratory, a small altarpiece in which the icon sits as an object of prayer and devotion. The King of Kings – the icon’s official name – moves the entire city. For the Mendozas, being the piece’s rightful owner is a deep responsibility, and a life-long experience that has transcended three generations.

It’s only 7 AM and the musicians have already woken everyone up. The Mendozas sit down for their hogroast breakfast, and probably sleep out a siesta in the afternoon. In the evening, they accompany the Priostes Vitalicios (Priostes For Life), with whom they will be zealous spectators of the evening organized by the elected Prioste de Vísperas (the Eve Party Prioste) —who is chosen every year on that day. The entire neighborhood is invited —the entire city, actually— to Riobamba’s Olympic Stadium, a stage worthy of an event such as this (Ecuador’s first ever Olympic stadium), and a night filled with fireworks and music. This year, local stars such as Dinamarca, Juanita Burbano and Trío Colonial were hired for the show, a difficult act to beat for future priostes. The four-hour event ended with the official presentation of the King of Kings at 11 pm. The Mendozas then swiftly took back their icon and walked from the stadium to the oratory, to close the ceremony and appoint the newly elected prioste. He receives his investiture on February 2nd, in another protocolary celebration organized by the Mendoza family. Ramos explains that Pases stretch to this date! Two months of Christ Child madness!

By January 6th, Día de Reyes (Wise Kings’ Day), over 3,000 people reach Santa Rosa, participating in one of over 140 comparsas. Down descend, as Ramos had foretold, the Three Wise Kings on their horses from the highland village of Tapi, and without fail, Yumisaca’s troupe, with other groups of dancers from other neighborhoods; even other cities. They dance with surprising grace — it’s their moment of glory, under the watchful eye of the wooden King of Kings himself— each character respecting his or her dance steps to a tee. It seems like reverence, but it certainly shows the devils’ and dogs’ uppity nature, as they pay their respects — in their uppity way — to the Child; a kinetic metaphor that marks the year’s end and beginning, an elegant salute of sinful souls who dance to clear their conscience while still showing the pride that moves them… From 8 AM till after 5 PM, the city seizes its opportunity to honor the Child, convinced that there isn’t a religious parade as colorful and distinctive as their own.