Few are the settings that compete with the sight of Chimborazo’s shining crown under clear skies, as the sun reflects against the snow flowing down the slopes like meringue. Traveling along the E30 highway, one thinks of the golden days of mountaineering, when only a handful of adventurers climbed to reach the unattainable for the first time. Today, however, there are those who want to slide downhill from up top. Not just any which way, but on a snowboard. Here, in tropical Ecuador! 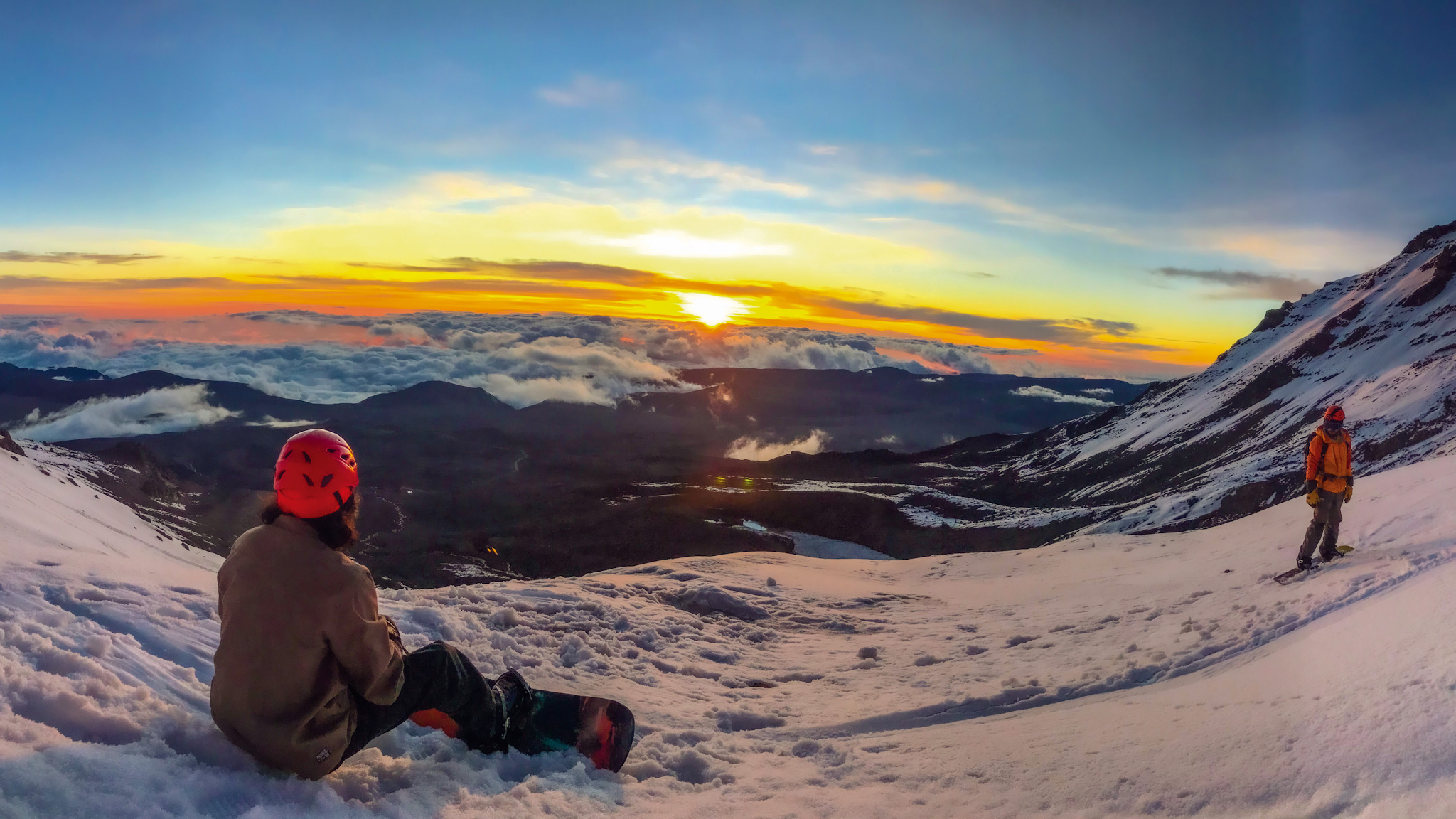 When it snows on Mount Carihuairazo, there’s a group of snowboarders that get psyched to hit the slopes. The look on Kone, our local guide’s face, betrays his emotions. For him, the mountain is therapy. ‘If the weather was always like this, I‘d be here every day’, he jokes, in such a way that he makes me doubt if, in fact, he would actually make the trip, every day. But as we get closer, the destination seems like it’s actually getting further.

We turn off the main road to find ourselves straight in front of the volcano; a short drive in our 4×4 that leads us to the community of Patococha (Duck Lake), who have made it their mission to implement snowboarding as one of their tourism activities. The rearview mirror announces a group of horsemen approaching at full speed. Kone rolls down the window to greet them. They’ll be in charge of taking us uphill, on their horses, with all the equipment on our backs, straight up to the summit. 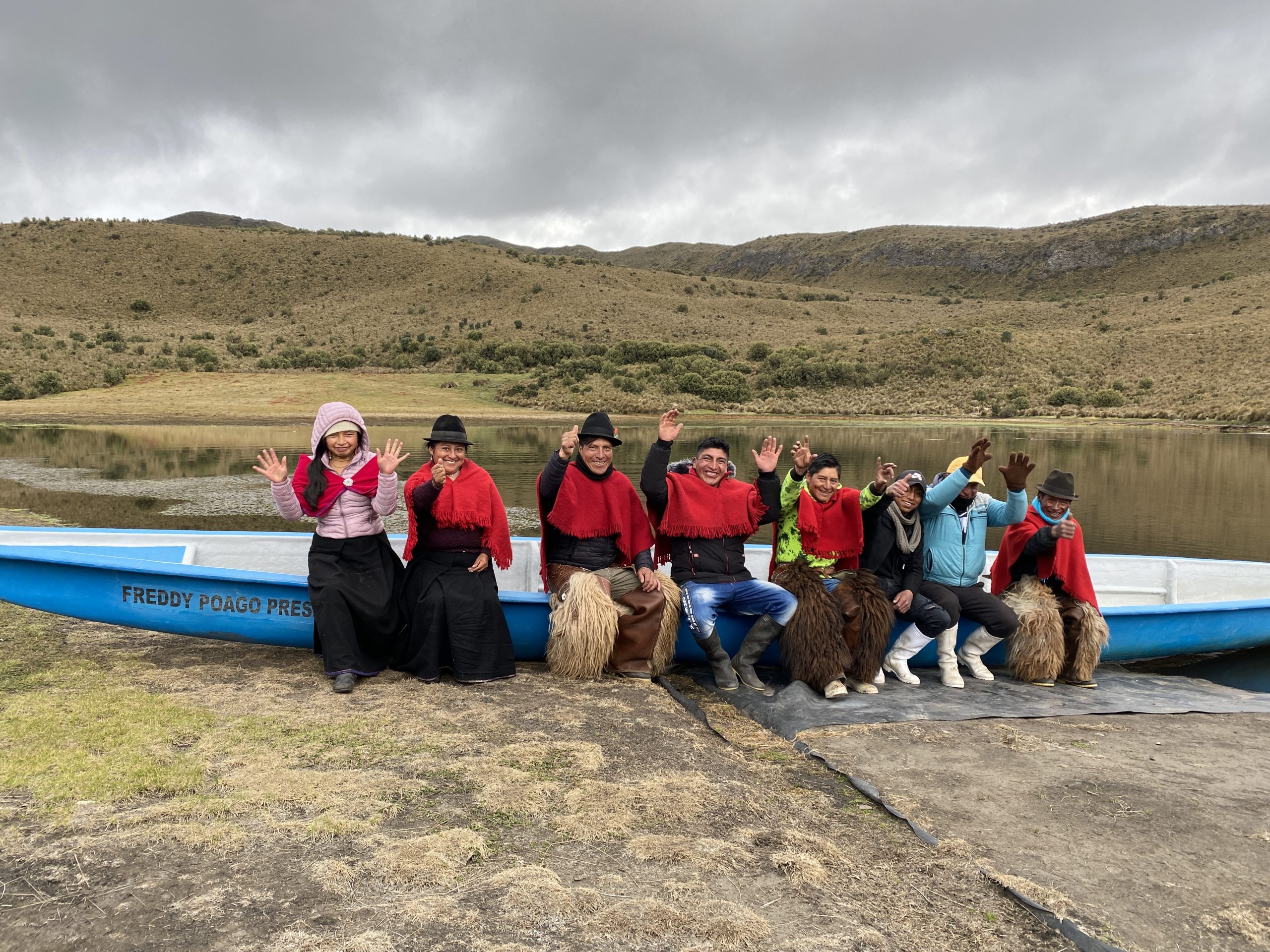 The sun begins to reveal the landscape. We unpack everything immediately so as not to waste any time. Hats, goggles, protective sweaters, the boards, everything is on the ground and is quickly distributed by Kone for the entire team. Well, except for the community guides, who, with their ponchos and rubber boots, are already prepared. But first, a cup of coffee. There’s a little time, enough to also chow down delicious freshly-baked empanadas prepared by our hosts.

With the heights of the great Carihuairazo as our goal, we saddle up. My horse is called Canela (Cinnamon) and it will be her first hike. After a (very) short riding lesson, we are ready to go, a climb of approximately two hours.

As we leave Patococha behind, the comfort of riding across the plains soon comes to an end. The road quickly gets rocky, steep and windy, worthy of the adventure we were expecting. There are sections where Canela has difficulty finding her footing. That’s when Kone explains that I must put all my weight (and that of my gear) forward to help her gain momentum. The same occurs on descents. I should confess, however, that in addition to that technique I was also trying to hold my own: holding on tight to the reins. 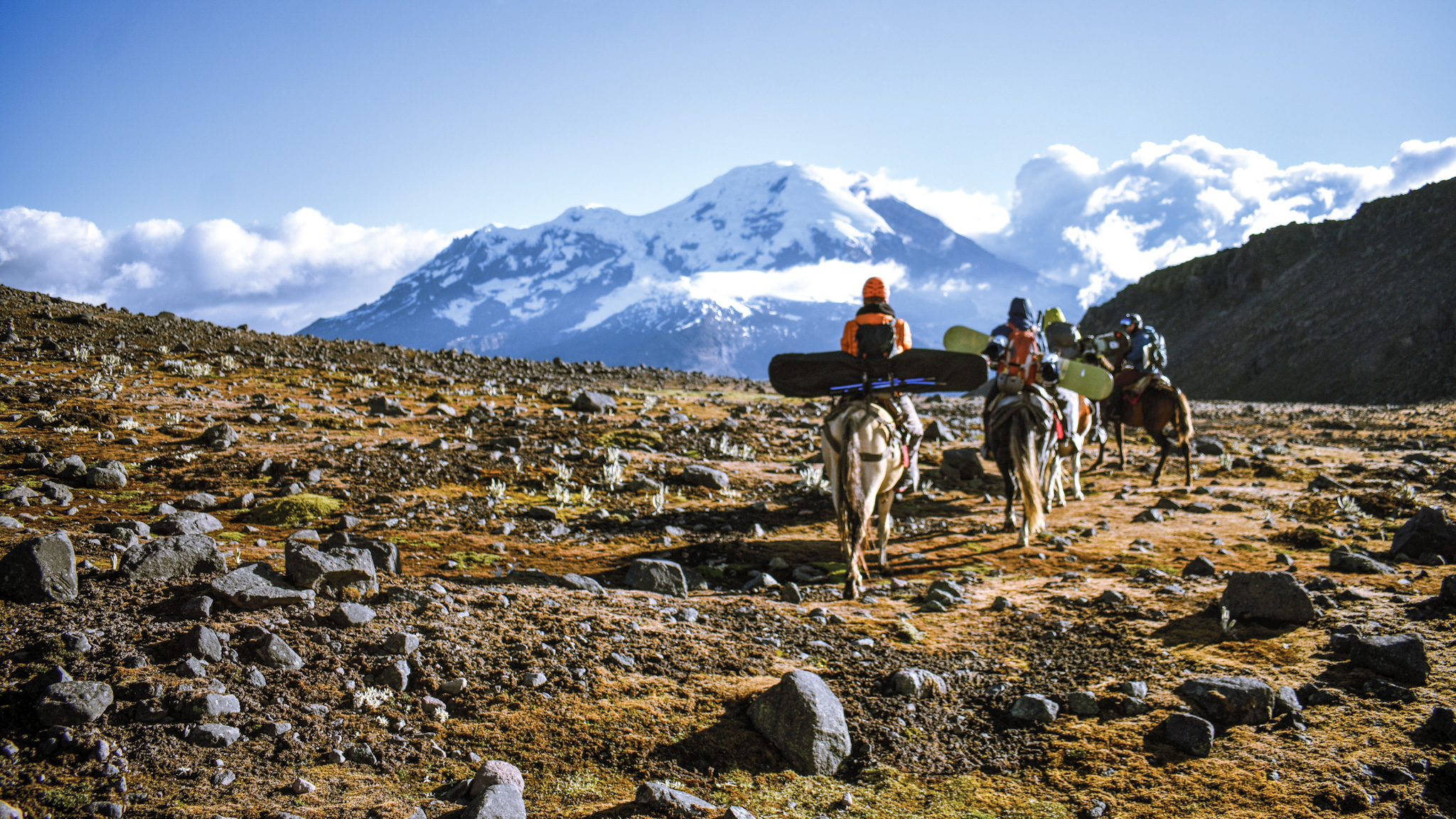 After crossing countless hills, the fluttering of clouds above announces that we are approaching our destination. With each movement, the paramo landscape changes and adapts to its geology. Almost as much as our guides, who don’t feel the least bit cold. It even seems that they possess special, natural protection against the snow.

When the transition from sun to clouds is complete, we know it’s time to dismount our horses. We’ll be hiking the rest of the way up. We pass snacks and drinks around. ‘It’s a great day!’ exclaims Kone. I think he means that there is no fog. Anyway, encouraged by the comment, we say goodbye to our steeds and tread forward. 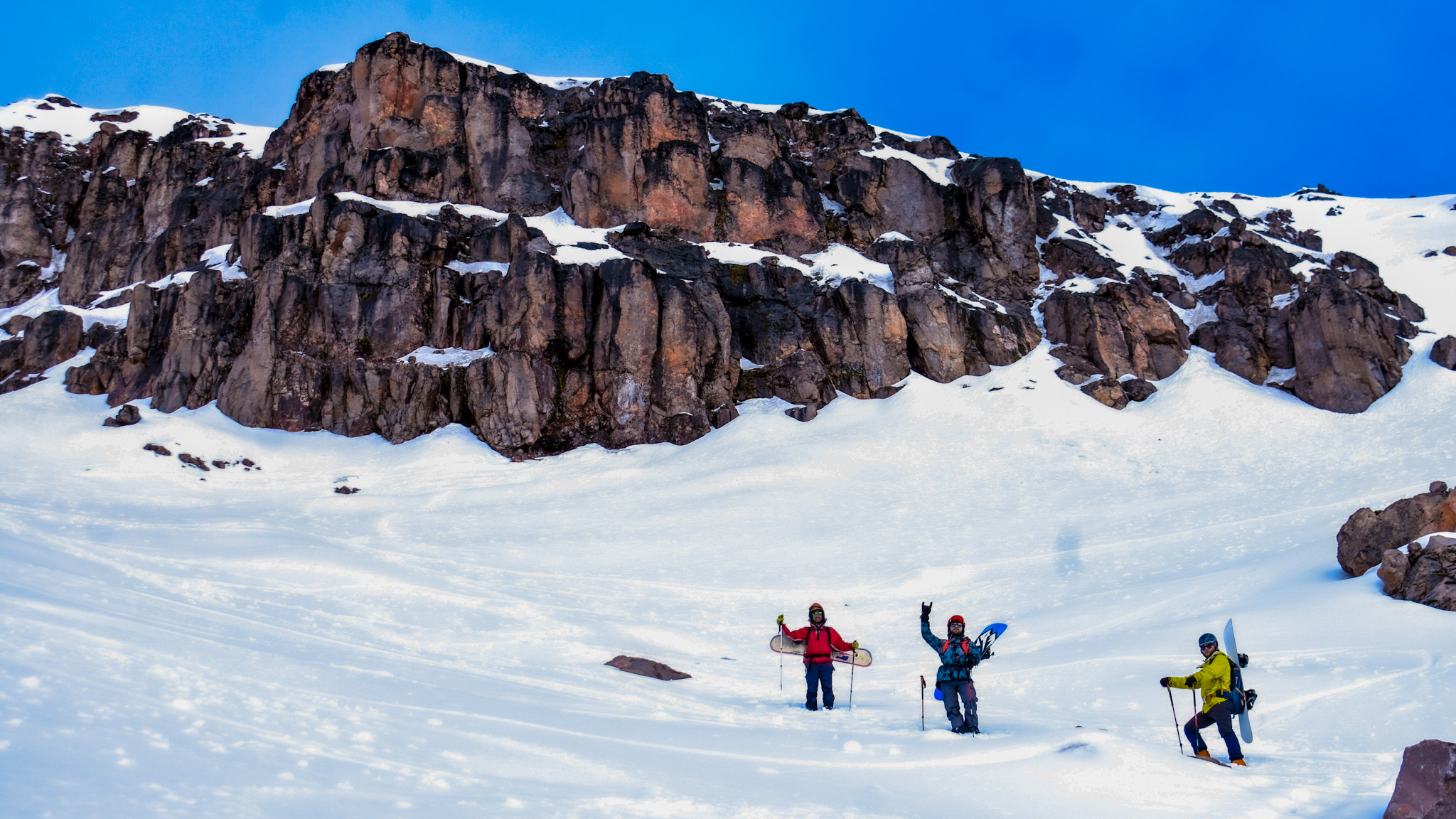 Snowboarding in the Tropics

Come to think of it, it must have been the excitement. As soon as we were in contact with the snow, we began to scramble about like children. Bad idea, we need that energy for what we’ve come to do. Anyway, we certainly felt that we were on top of the world, ready to face any challenge.

With every step, the depth of the snow increases. The same happens with the thrill of practicing a sport for the first time. “Your back should be straight; you have to bend your knees slightly and keep your feet firm to give direction to your board,” Kone explains in an express class as he adjusts his bindings (the base where the feet are attached). Excited, he begins his descent screaming with emotion, which virally spreads over all of us. 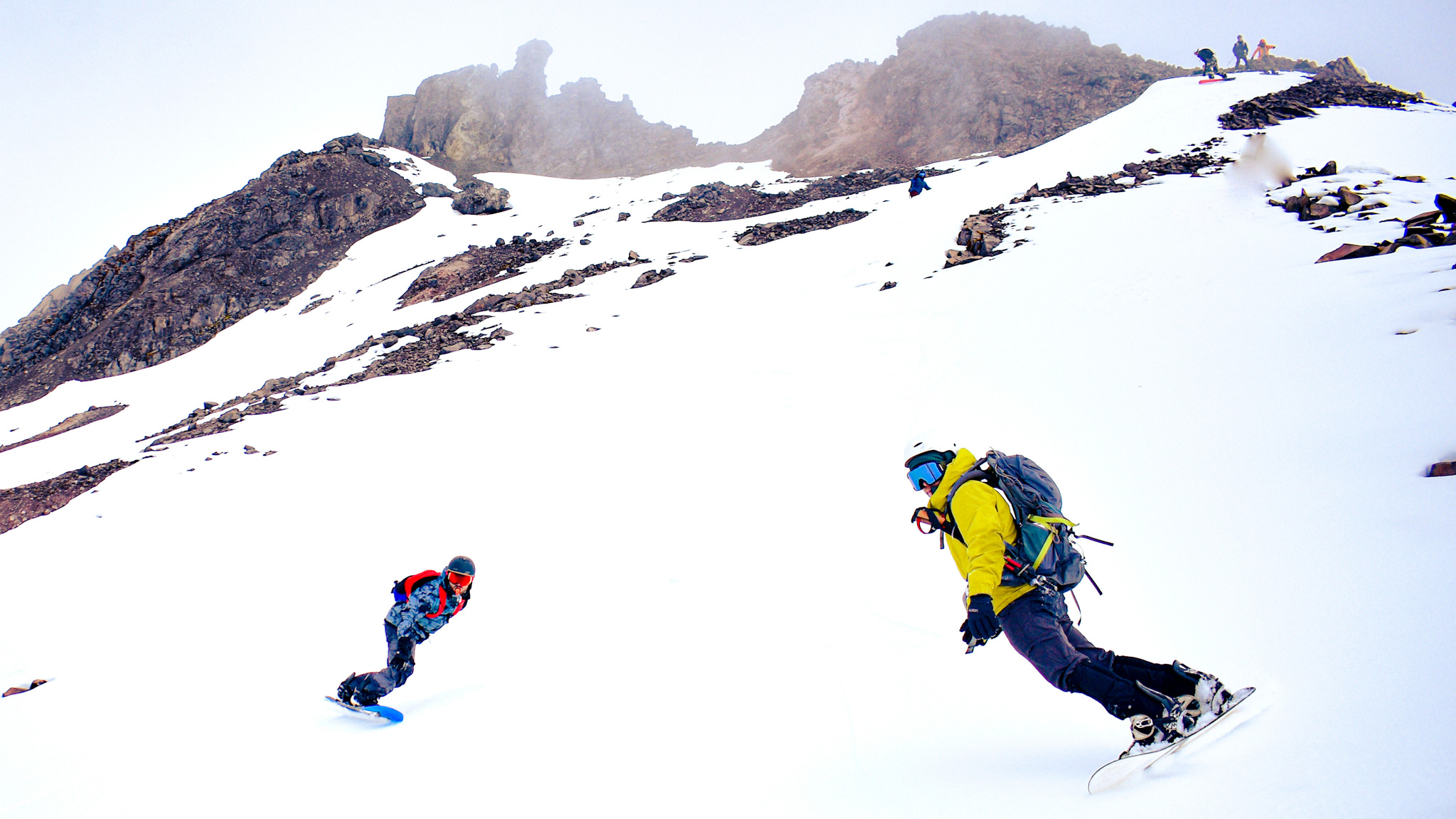 And so, the moment arrives. You have to follow the directions and voice of Kone as you plummet downhill for the first time. He helped me with light movements in order to hold the correct position. ‘Follow the tracks of my board!’ I hear just before I slide. To my surprise, the “direction” bit is not a difficult task. The cold mountain air takes my entire body over. It’s a unique feeling, a perfect mix between full adrenaline and a brain-freeze.

I can’t say my first fall was fun. When I tried to stand up, the snow came up to my elbows, making it difficult for me to use my arms. ‘You need to propel yourself with your legs,’ exclaimed Kone as he watched me struggle from a distance. After several failed attempts, I succeeded. Of course, with considerable discomfort. So I really tried not to fall again. But of course, I did. 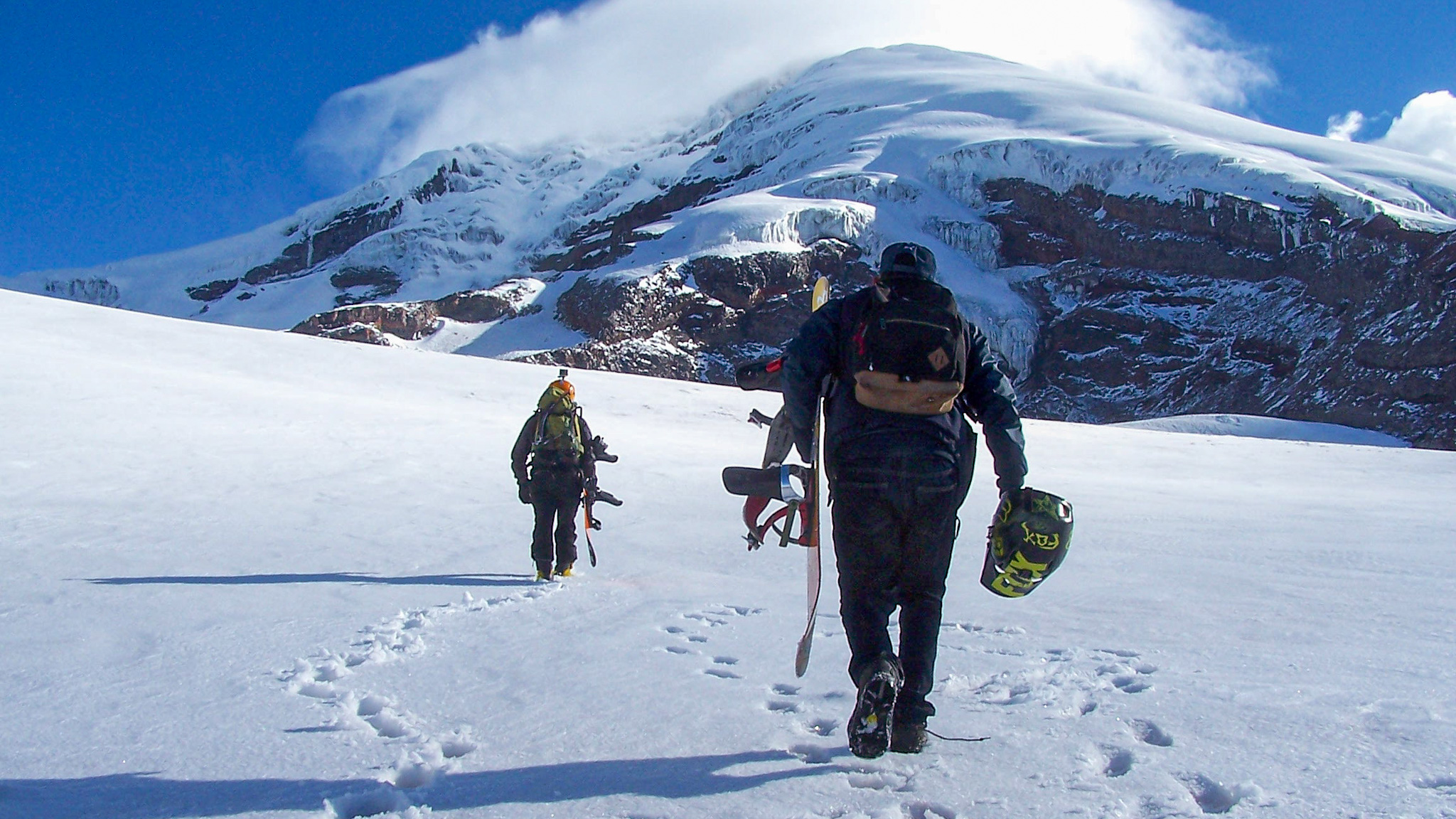 With our feet on the ground

It was hard to let go of the board. Despite the struggle and many hours wallowing in the snow, one had to accept that it was time to go. We were all tired, except for our guides, who seemed recharged with every step they took. But we cherished every last centimeter of snow until, in the distance, we observed our horses waiting for us patiently as we returned.

As we made it down, I felt like all I learned on that mountain was a part of me. The air felt lighter, with the satisfaction of having learned something new.

A group of community residents was waiting for us at the communal house. They took us for a ride in their canoe around the lake, singing local folk songs and enjoying their anecdotes. When asked if they had tried snowboarding they replied: ‘that’s only for the tough guys’. As we laughed, I thought: ‘today I was just a rookie’. 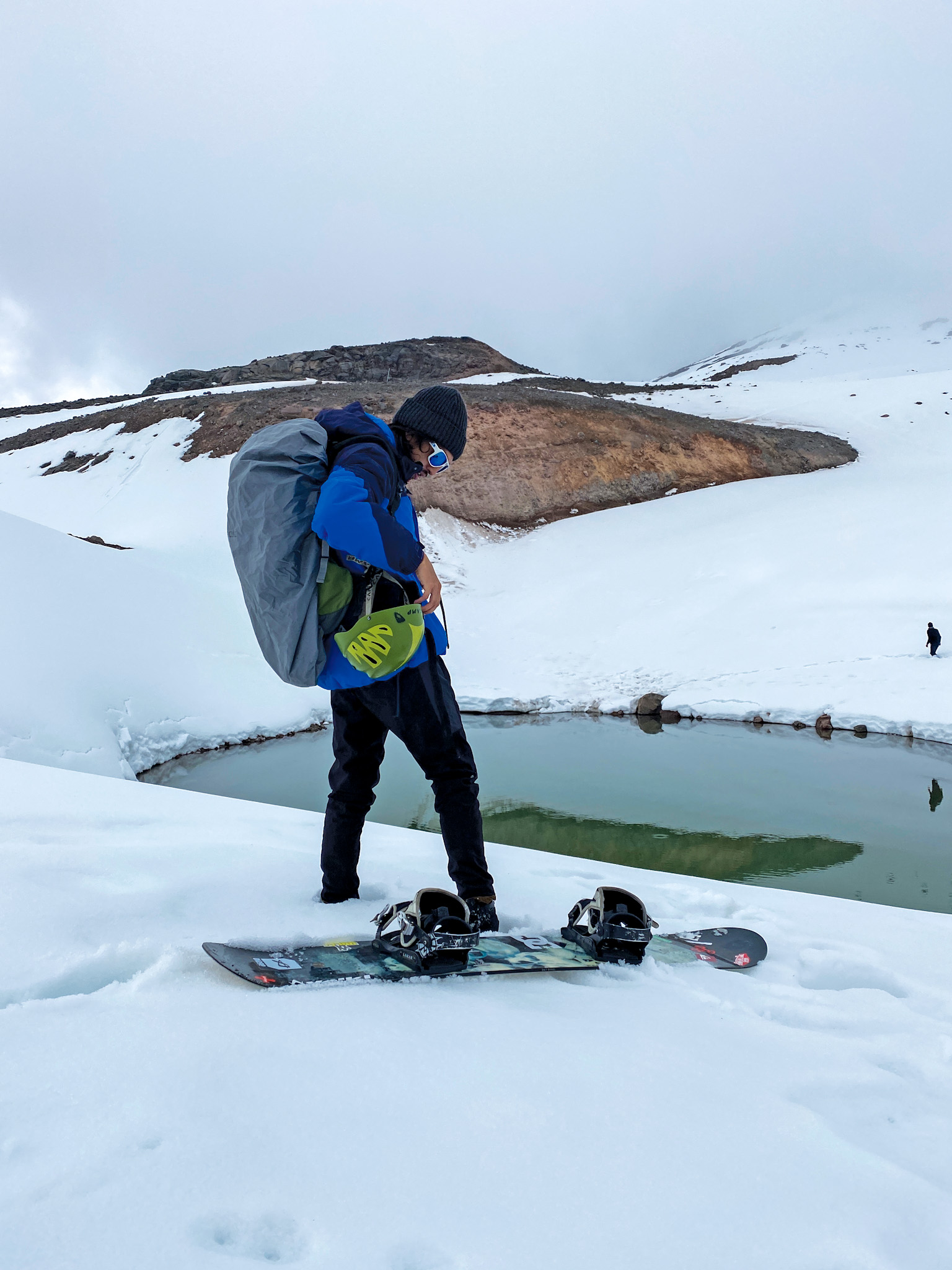