One of Ecuador’s most representative folkloric groups is Jacchigua, with its 400 dancers and music and dance performances rooted in Andean culture. Jacchigua, which takes its meaning from a Kichwa word referring to a colonial festival, is now seen as a folk ballet, grown from the need to “recover, value, maintain and share…” an Ecuadorian ancestral memory of a multilingual country of many nations and ethnicities.

In the last few years, the main aim for Jacchigua’s director, Rafael Camino, has been to recover expressions of heritage. Among these are the religious festivals that represent the synchronicity between Catholic tradition and indigenous ancestry. For Camino, it is about seeking out the cultural references, specific to Ecuador, in these traditions.

Festivals such as Santa Marianita in May; Corpus Christi and Saint Peter and Saint Paul in June; the Virgin Carmen in July; Saint Rose in August; the Cuirasses and the Standard-bearers in September; Saint Francisco in October; Day of the Dead in November; and the Pase del Niño (Procession of the Child) in December all take over city centers and demand that the public participate.

The grand inauguration of Easter Week is the Palm Sunday procession, which reminds people of Jesus’ arrival in Jerusalem. Also called the “Festival of Saint Salvador,” this event is brought to life in coordination with Jacchigua and the brothers of the San Francisco Convent. It is a great procession where at least 80 Jacchigua dancers mix with the faithful. The ritual is actually a colorful and joyous one, as Jesus is remembered triumphantly on his humble donkey, received by his followers. All participants hold bouquets of leaves and plants in their hands in what has become a colorful motif of the veneration. 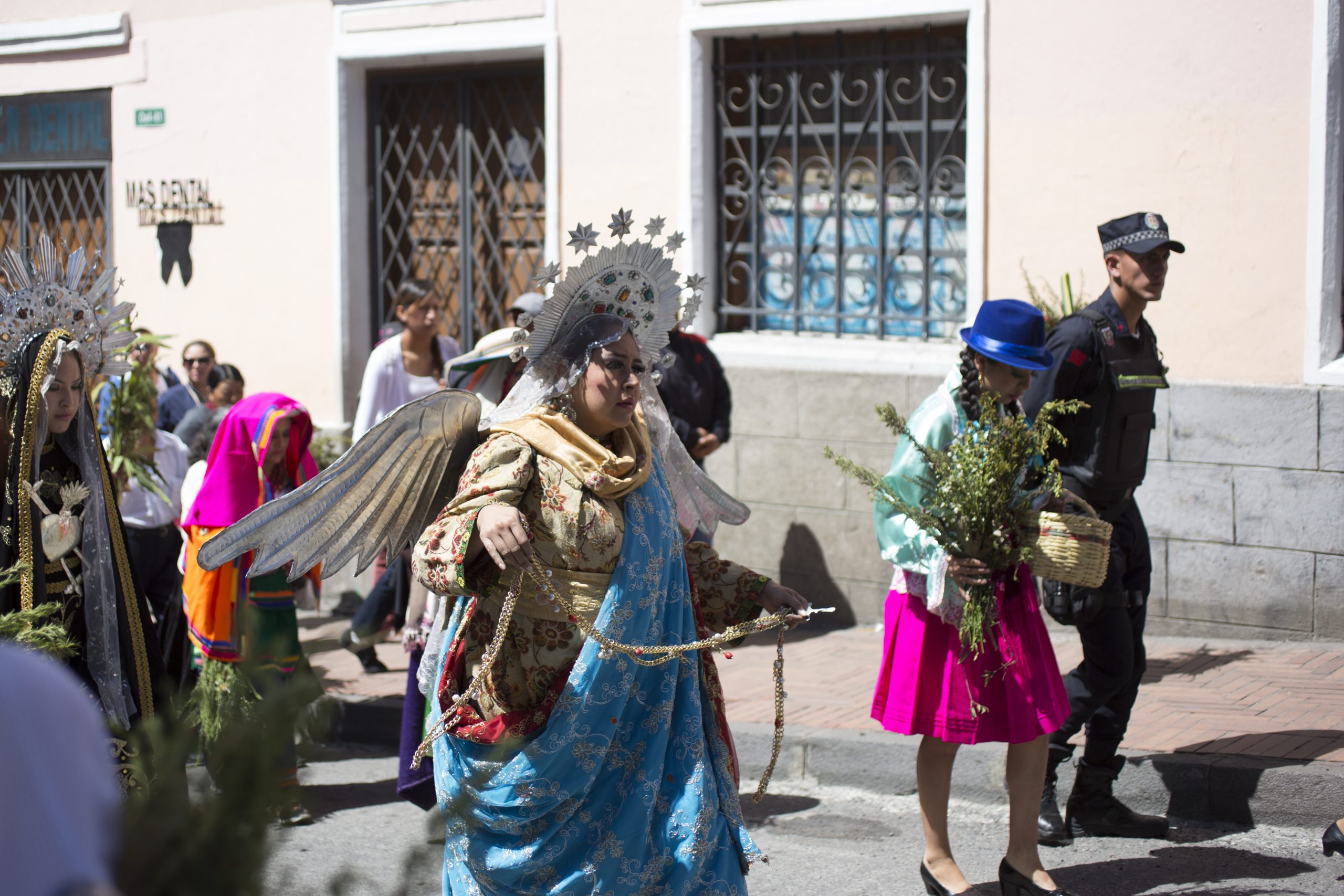 By adding to the dynamic of the city and the sensibilities of its population, Camino feels the ballet helps to keep Quito alive. It is not just about restoring monuments and architecture, but also movement, Camino stresses. What is important is to integrate, and share the culture of this city — the first to be declared a cultural World Heritage Site– so that doors and windows are opened, so that the residents of the historic center no longer shut themselves in, so that they can find, once again, the value of the place they live in, and so that the city’s identity is not lost.

Camino is enthusiastic about the mixture of beliefs that has come about in Ecuador. He gives himself up to this “syncretism,” in which religion is refreshed. “It is a beautiful blend,” he says about the culture clash that has given us saints, a virgin, a demon, a God, while the indigenous peoples continue to honor the water, the trees, the sun, the moon. It is this blend Jacchigua sets out to transmit.

The procession begins at the Basilica del Voto Nacional, the largest neo-Gothic basilica in the Americas, where plants of rosemary, corn, broad beans, puma maki, barley, eucalyptus, flowers and myrtle are blessed. Until some years ago, the faithful carried palms from the Ceroxylon wax palm. 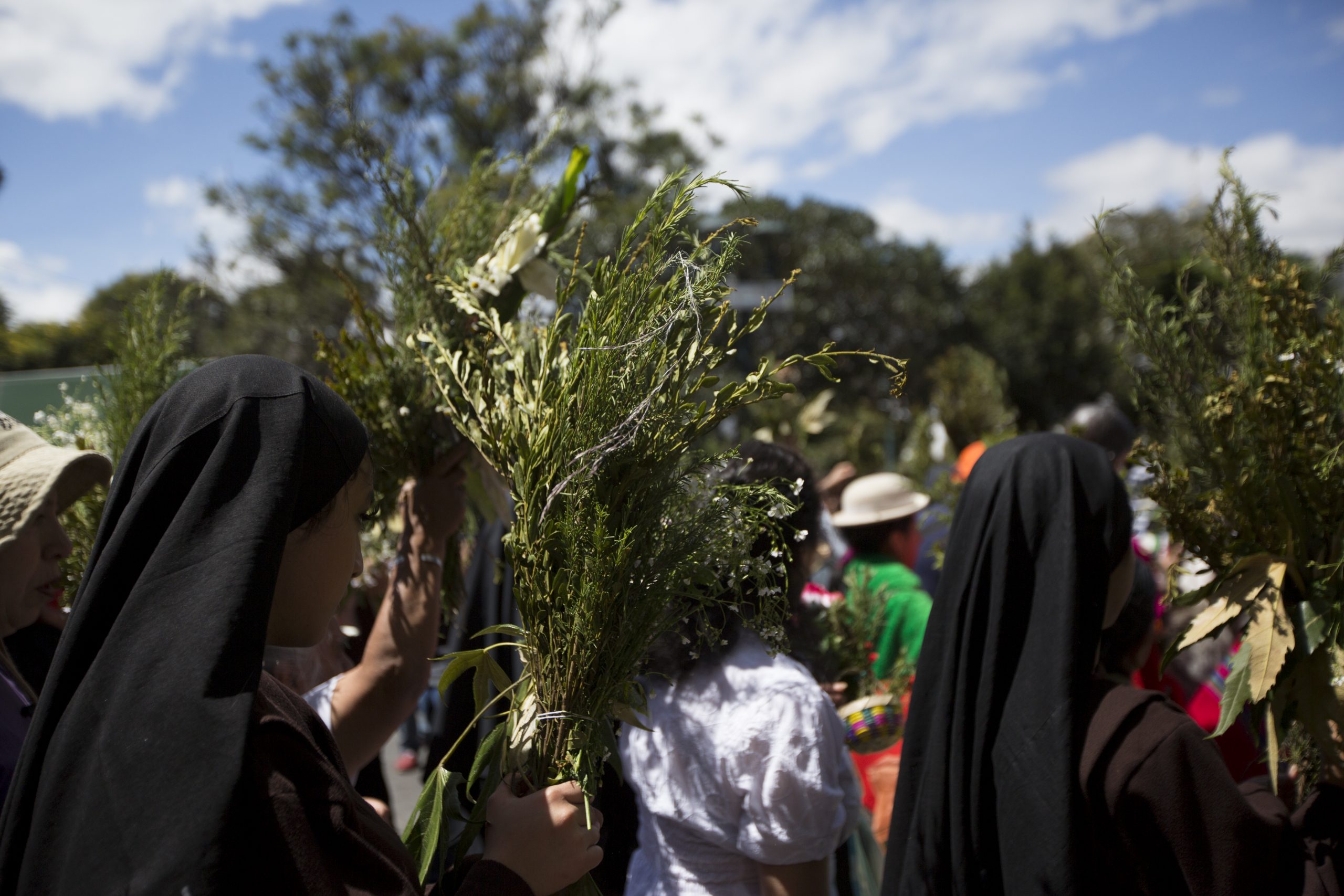 Accompanying the high cross in the procession and the ciriales (carriers of the large candlesticks), are characters from Jacchigua dressed as different cultural icons from all corners of the Andes. They dance among the saints, the Virgin of Sorrows, the Virgin of Quito, and a life size, colonial statue of Jesus, mounted on a donkey. Amid the aromas and incense smoke, the faithful and the holy sing with fervor in a bid to be pardoned for their sins.

The procession continues along Venezuela Street, up Manabí Street to García Moreno, and then along the cobblestones of Sucre and Benalcázar before arriving at the Plaza San Francisco, where the Royal Mass is celebrated with a 15,000-strong congregation.

Quito, under the protection of the imposing Pichincha volcano, rings out with the voices of thousands of participants. The trees that color the surrounding hills appear to be listening to the prayers of those carrying the “ramo,” or bouquet, seem to calm and envelop the city; only then doe s Quito “truly recover its faith, not only in religion, but in itself,” says Camino, ending the interview on a spiritual high.

Jacchigua is part of the International Council of Folkloric Festivals and Traditional Arts Organisations (CIOFF); the same body that encourages everyone to visit the convents, cloisters, temples and monuments; and to participate in these multitudinous processions, which are such a central part of Ecuador’s identity. 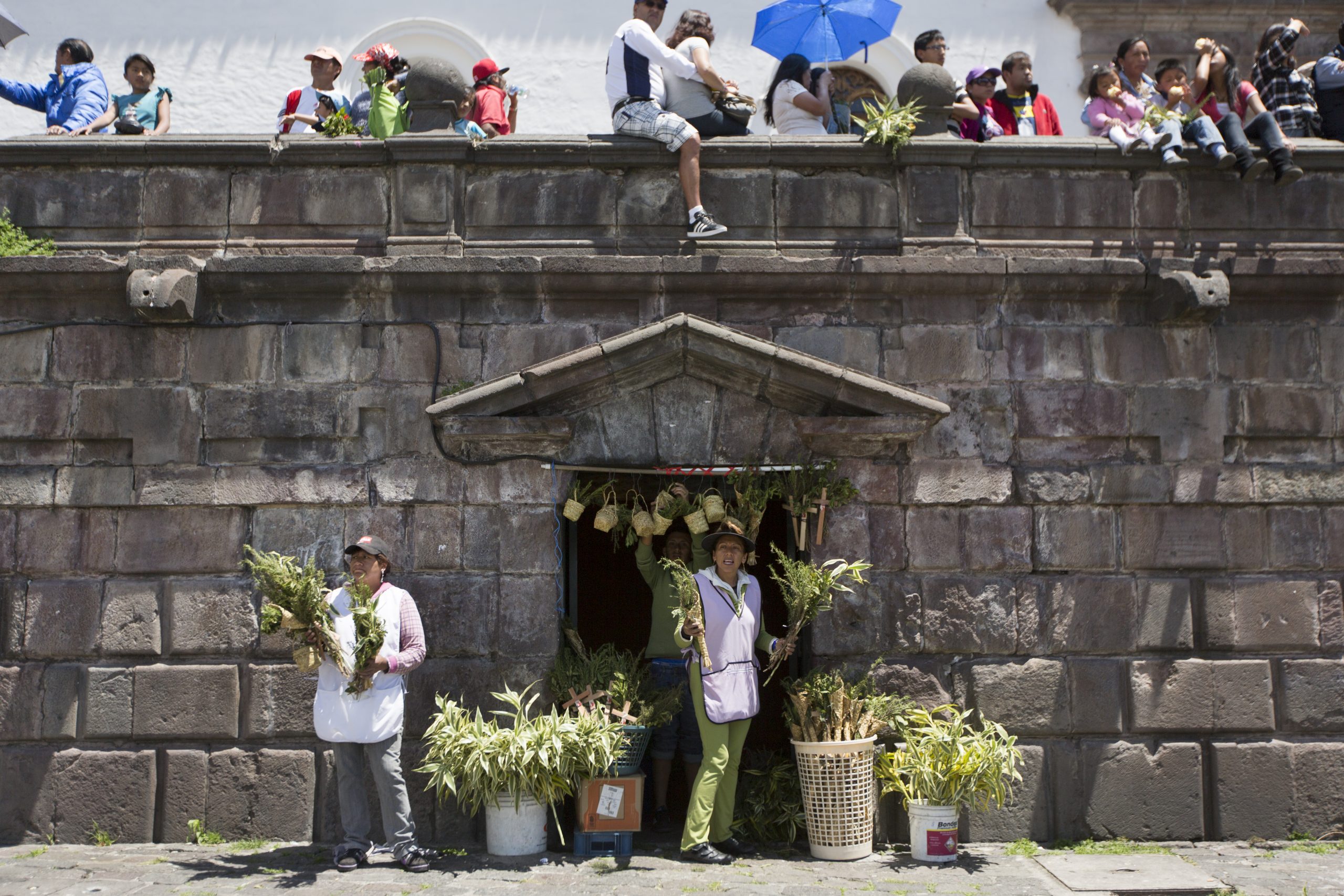