In San Cristóbal, you are warned about the “curse of the guava”. They say that if you pluck one of these fruits from the trees and eat it, you will be cursed to forever return to the island. I, of course, did not see this as a curse. I approached every tree I saw overflowing with guavas, promptly plucked a fruit and took a giant bite out of it. My intentions to the Galapagos gods were very clear: I intend to return many times over…

I arrived in San Cristóbal with the happiness of a child who dreams of going to Disneyland and finally makes it there. And like that child, I confess that the itching desire of finally stepping onto the “Enchanted Islands” for the first time meant I didn’t sleep a wink the night before. Worse still, when I landed on the island, my heart was beating so hard I felt it struggle against my chest. I’m quite certain it would have given in were it not for the yoga exercises I’ve been practicing. I was just a wee bit excited.

And San Cristóbal…? Oh, San Cristóbal… Now I immortalize you with these humble words… It was not even close to what I imagined. It was so much more dazzling and bewitching. 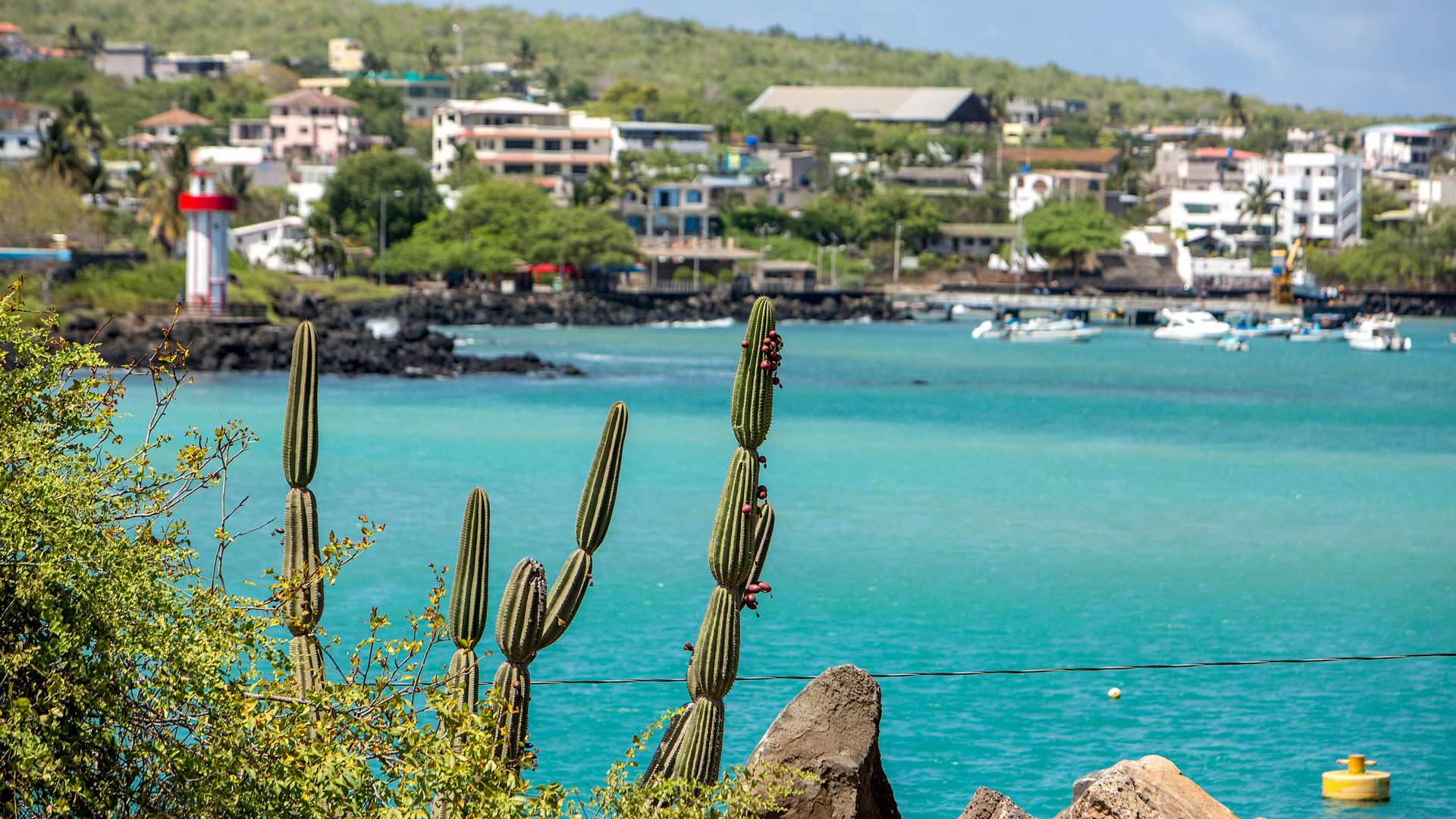 When you arrive in Puerto Baquerizo Moreno, the provincial capital of the Galápagos Islands, the warm sea breeze welcomes you with an earnest embrace. That first gulp of air in this volcanic place reveals how special it is: far, far away from pollution, from the smog of the city, closer and closer to Nature.

Despite being the second-most populated island in the archipelago (Santa Cruz is the most populated), San Cristóbal is a quiet and peaceful place. Tourists don’t flock here in such large numbers. Life is still that of a small town, where everyone greets each other and exchange knowing looks. The cab from the airport to the town is in fact one of the few cars you’ll find on the streets.

For getting around town or visiting the coast, walk or rent a bike. To explore the highlands, consider hiring a taxi or pickup truck for the day, especially if you want to combine several activities.

The sounds are different here. No car horns, no city bustle. In their place one listens to the recurring hum of the rocking sea, the waves rolling up from the depths of the ocean to caress the shore, wrap the sand with its blue mantle and white wake. An unexpected sound comes from the local sea lions, which bark occasionally between their bouts of resting peacefully along beaches, boardwalks, public benches, even on the street…

For a city girl like me, this symphony was music to my ears. Walking along the boardwalk, I was overcome by the elements: the sea, animals, waves, isolation… I’d soon forgotten that once upon a time (a couple of hours ago) I had been surrounded by cement and an entire city. 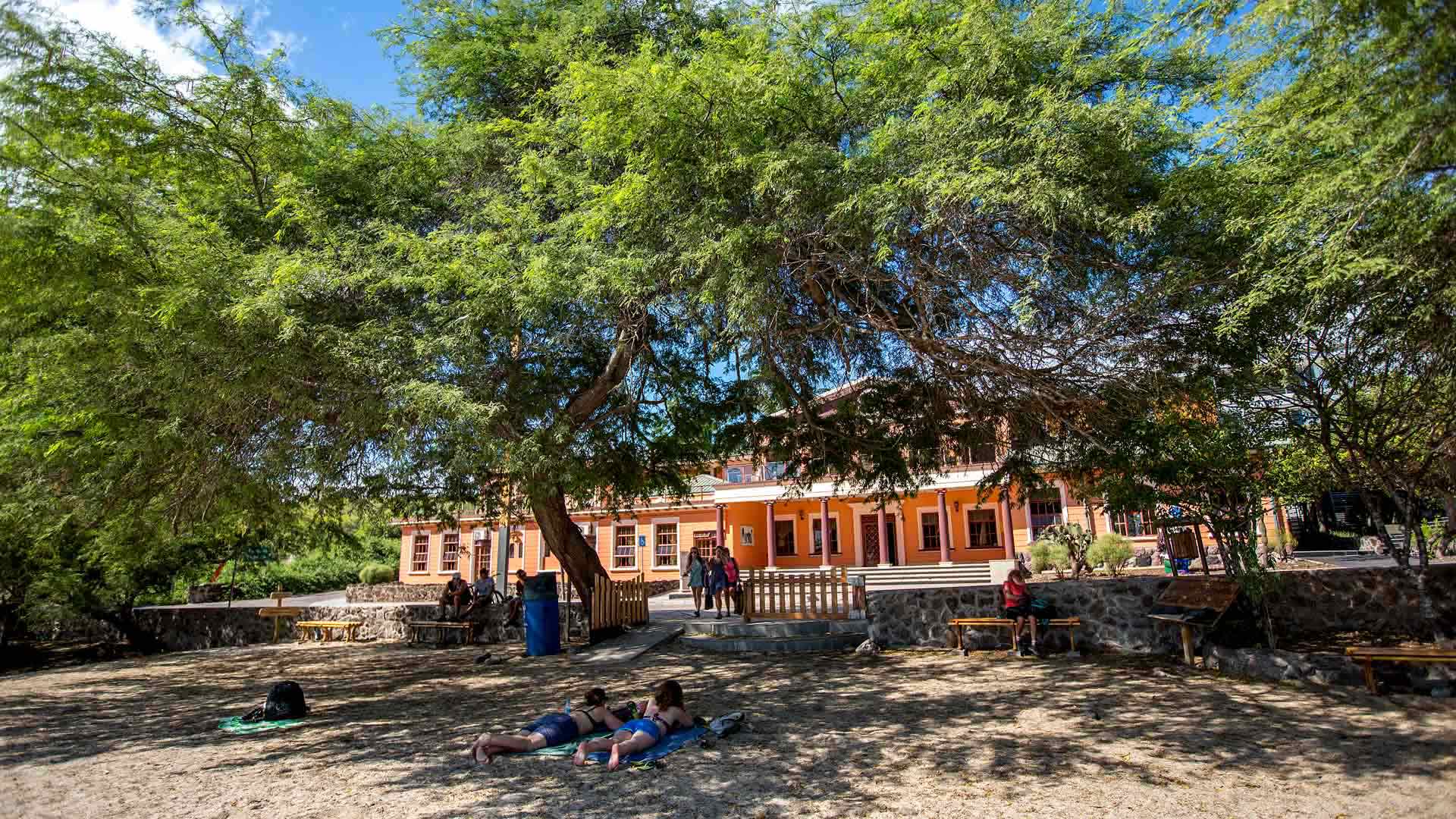 On my first day, I walked around town, calmly getting to know and understand this new world I’d arrived in. Walking along the boardwalk, I saw the sailboats and motor yachts moored in the bay. The fishermen unloaded their catch of the day. Tourist boats set sail for other islands, while others disembarked their passengers on the pier.

The boardwalk is lined with hotels that promise beautiful views of the ocean horizon, souvenir shops and restaurants. A couple passed by on their bicycle (a romantic vision that would repeat itself several times during my stay). A wooden house caught my attention. It seemed a hundred years old but it was well maintained and was different from the other modern structures around it. Days later, on other walks, I found other similar houses similar and finally, when I meet San Cristóbal native (and Galapagos guide) Whitman Cox, he explained that the same house that I had noticed was his mother’s and that it was built soon after Second World War: “When the Americans left their military base on Baltra Island behind at the end of the war, they abandoned these imported wooden planks. The colonizers at the time took advantage of them to build their homes,” he said. They are only a few such homes, built with “Baltra pine”, still standing today.

At the end of the pier, towards the west of the island, a statue of Charles Darwin extends his hand so that everyone who passes by can touch it. It’s not every day you can touch one of the most influential thinkers in history… If you are in selfie mode, it’s worth taking a picture… I, obviously, took several… so that the meeting between this humble journalist and the great scientist be forever fixed in the annals of Instagram. 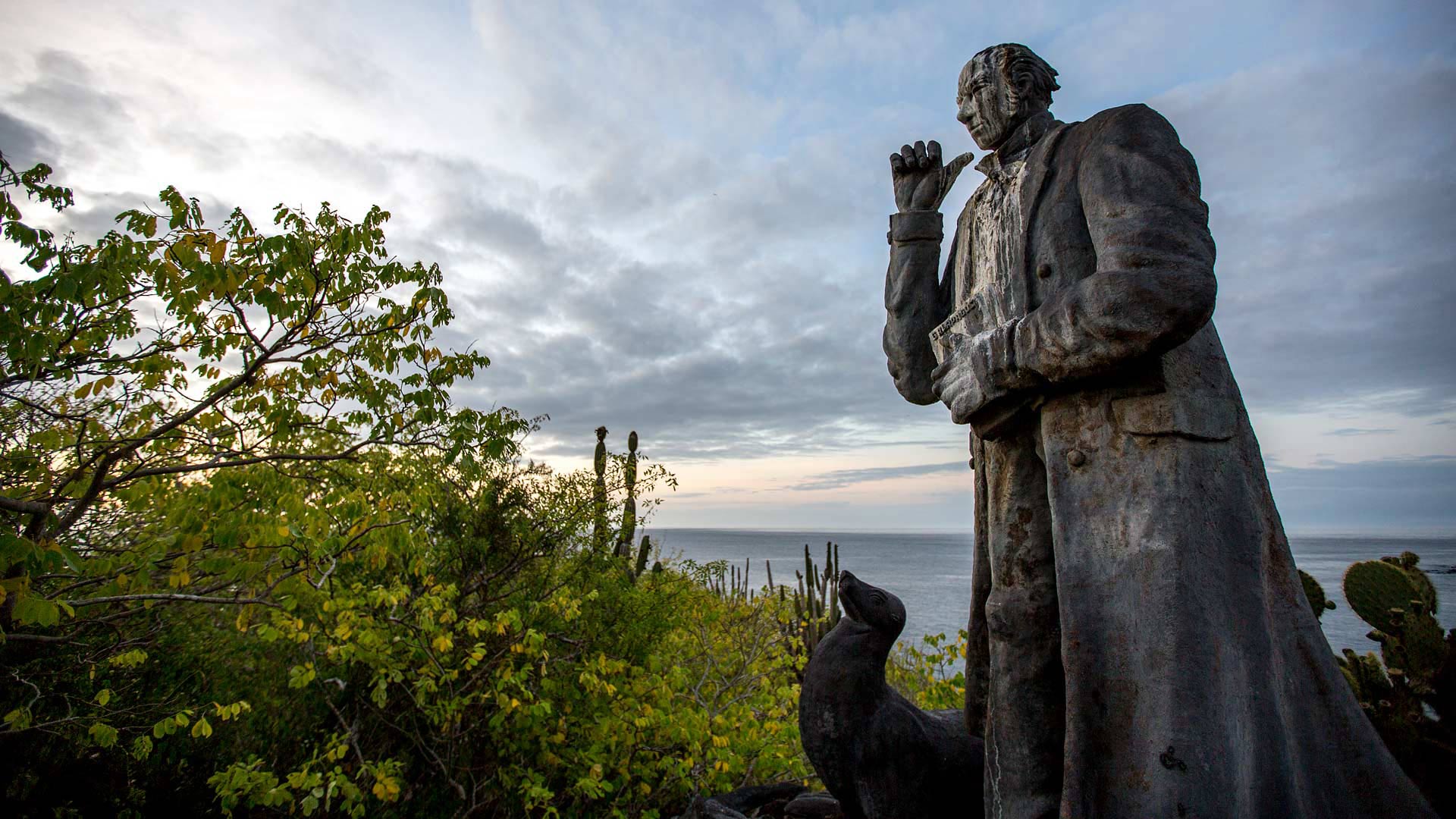 Playa de Oro extends just beyond Darwin. Perhaps it was a place to sunbathe and rest, but now sea lions have conquered it and it’s difficult to find a free plot of sand. Days later, tour guide Carlos Chauca told me that San Cristóbal is so full of sea lions because they have become accustomed to human presence. If they spent more time farther out at sea or in other more secluded areas, they would be easier prey for sharks. They therefore prefer to spend their time on the shore, where they are safe and can steal the hearts of tourists who wouldn’t dream of hurting them.

A 10-minute walk from downtown and past Playa de Oro, we arrive at Playa Mann. Located opposite the campus of Quito’s San Francisco University (USFQ), it is the most accessible and popular nearby beach. Here, you can swim in the clear blue waters, lie back on the white sand and of course, hope to play with sea lions pups, before continuing your walk towards the lighthouse.

The Lobería and the Barranco

That first day, I also met the young man who would become our naturalist guide, friend and “personal musician” during our stay: Federico Idrovo, or “Fede.” Fede has lived most of his life in San Cristóbal. When we met him, he was carrying a surfboard about double his height. He feels more at ease at sea, he told us. He is also the son of musician Hugo Idrovo and a member of the Galapagos band, Arkabus. He recently became a licensed Galapagos guide and shared his knowledge for his home with us with earnest passion.

Fede also recommended we get up early the next day to discover the southwestern corner of the island: La Lobería beach. “Many go at noon or in the afternoon, but in the morning… that route is spectacular,” he told us enthusiastically. So, we did just that: we rose early and headed south from the town.

By renting a bike in town, you can easily reach La Lobería. Or you can take a taxi or pick-up truck for around $4 to the entrance. From there, a narrow 600-metre trail leads to the beach. If you continue to the Barranco, the trail is 900 m.

The Lobería is named after a sea lion colony that once occupied the beach but has since left – some probably migrated to Playa de Oro. With a crescent of stunning white sand, the ocean colors change constantly here, from deep cobalts to turquoise depending on the rocks and lights. The water is crystal clear. It contrasts with the jet black volcanic rocks, upon which marine iguanas of the same color crawl and huddle in groups, their skins scaly and prehistoric. These creatures look like something from another planet. In fact, Galápagos feels like another planet. It’s an over-used term, to be sure, but it’s what strikes all first-time visitors to the archipelago: that feeling of seeing something for the first time, of having no reference points with which to compare what you’re observing. It’s truly other-wordly. 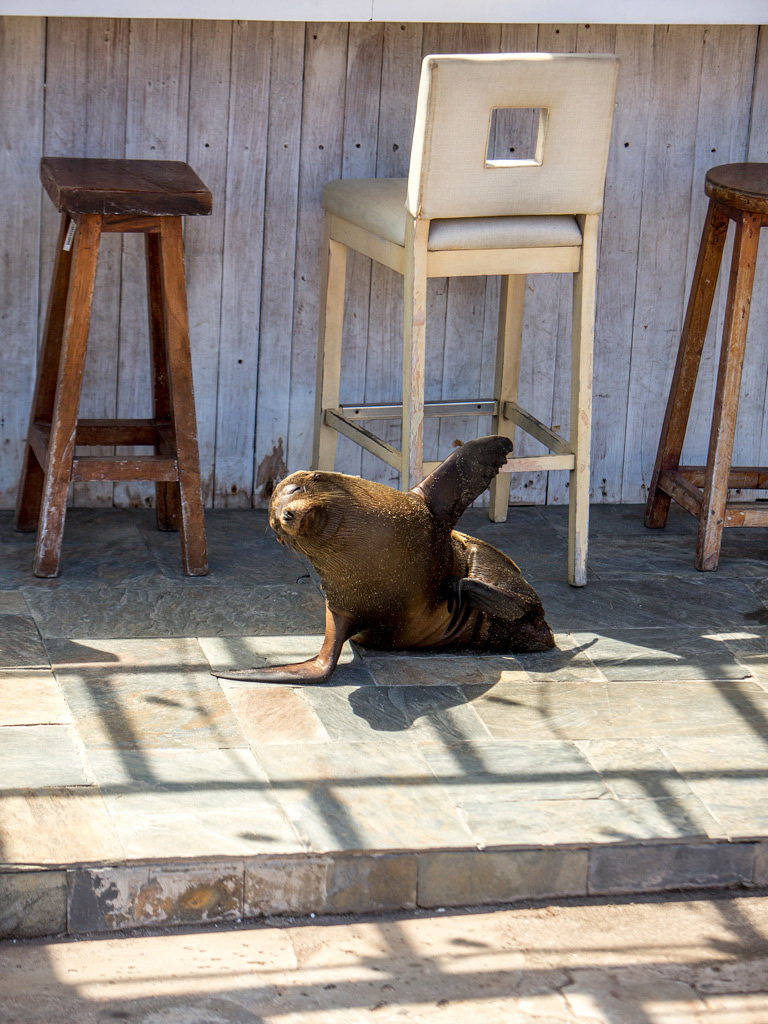 The clear and transparent waters of La Lobería make it ideal for snorkeling in the shallows, with plenty of fish species to spot and with luck a sea lion will zoom past. It is also a popular place to surf. Fede recommended we follow the path past the beaches towards El Barranco, The Cliff. For this 45-minute walk, take a bottle of water with you and wear comfortable walking shoes (don’t take sandals or go barefoot: walking on volcanic rocks can be very painful!).

Once at the viewpoint, the endless ocean roars at my feet. Tropicbirds and Blue-footed boobies soar and dive in the winds. I’m buffeted by the gusts on the edge of the cliff. A view to treasure now, and pocket for a rainy, cold day in Quito.

Cerro Tijeretas and the Interpretation Center

With its coastline facing west, it’s no surprise to hear that San Cristóbal is famous for its sunsets. Good places to head to enjoy the spectacle are Cerro Tijeretas or La Soledad. Guided by Fede, we passed the USFQ campus and Playa Mann, and then took the trail that climbs up to Tijeretas Hill.

We pass the Interpretation Center which is well worth a visit to find out more about the history of the island and the fascinating biological processes that take place across the archipelago. We continue along the path to the very top of the hill, half-an-hour’s walk through parched-looking matasarno and palo santo trees, Darwin’s finches flitting between them on every side. 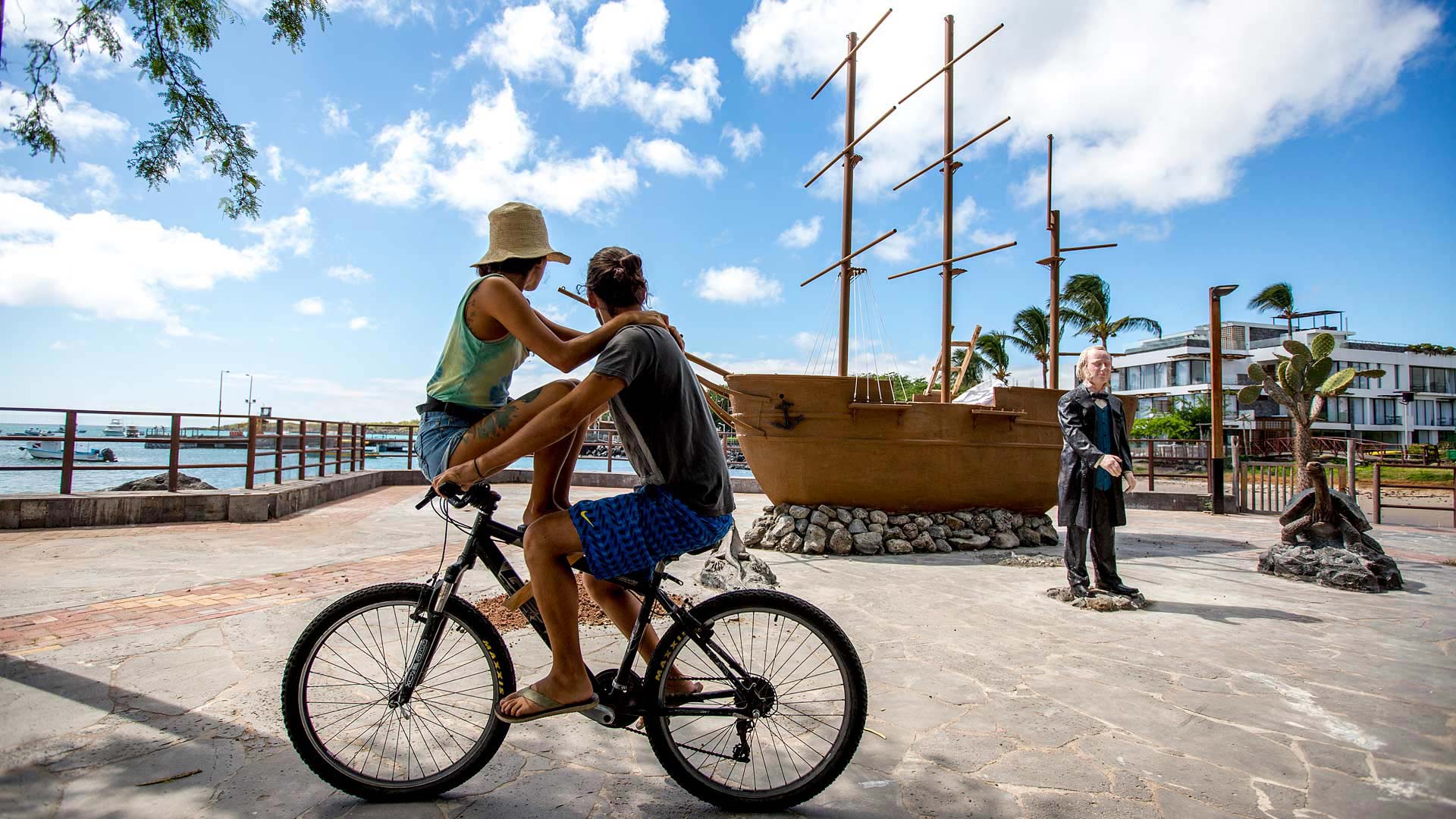 “The name Tijeretas comes from the two frigatebird species in the Galápagos,” explains Fede as he points to the birds gliding on the currents. “Their deeply forked tails look like a pair of scissors (tijeras in Spanish).”

The sun begins to set on the horizon, painting the skies in ochres and pinks. Moments like these on this island are magical. Below lies the cover known as Darwin Bay, where the HMS Beagle purportedly first arrived when reaching Galápagos. On the walk back to town, you can take an alternate path that takes you to three more fabulous lookout points.

In San Cristóbal, nights are always the same, yet this all seems so different. I listen to the occasional barks of the sea lions, always accompanied by the rumble of sea behind them. The joyful, carefree members of Arkabuz, Fede and Nico, sit before me, delight us with their songs and endless anecdotes, all epic, all fun, of their life here… I feel that tonight, as I do every night, I’ve opened my eyes more, tried not to blink, so as not to miss anything, hoping to capture it all. My hearing is more tuned, my skin feels more alert to the wind that caressed it. My senses, I realize, are buzzing, as if trying not to forget anything, to feel each detail again, to become etched into my memory, so that I’ll always remember the magic spell of San Cristóbal.

Christmas Count 2020: a tradition that makes a lot of sense in Ecuador

In years past, Chris...
Read more

The Club-winged Manakin: how a species is changing our views on natural selection

We traveled to the c...
Read more

Behind the mountain ...
Read more

FIVE ECUADORIAN BEACH TO EXPLORE IN 2021

Isla Salango: so close, yet so far

FIVE ECUADORIAN BEACH TO EXPLORE IN 2021

Isla Salango: so close, yet so far

Strolling along in Zuleta

Sea, surfing and adventure in Guayaquil