Your guide to Guayaquil Cuisine

In order to understand Guayaquil cuisine, you have to understand its role as a meeting point of rich ingredients, however contradictory. You wouldn’t expect anything less from a city that juxtaposes exclusive condos and underdeveloped invasions, that is riven by the colors of rival football teams Barcelona and Emelec. It was always going to have deep contrasts.

These contrasts are best illustrated by its citizens’ two loves: sustenance from the sea, but also all the goodness of the land. In Guayaquil, the two meet, congruent with its geographic location as a funnel for the ingredients farmed amid Ecuador’s tropical interior, but also as a port, a magnet for every delicious bounty its Gulf can produce – seafood by the bucketload, filling the waiting bowls of hungry patrons with the ultimate ceviches, chupes, encebollados…

A city that has graciously received migrants from every corner of the country reflects a cuisine as eclectic as the country itself. And believe it or not, even traditional Andean dishes like the fanesca, the humita, the fritada, the locro soup or the llapingacho (albeit with a delicious peanut sauce), are dishes that Guayaquileños consider very much their own.

Learn more about some of our favorite Guayaquil dives. 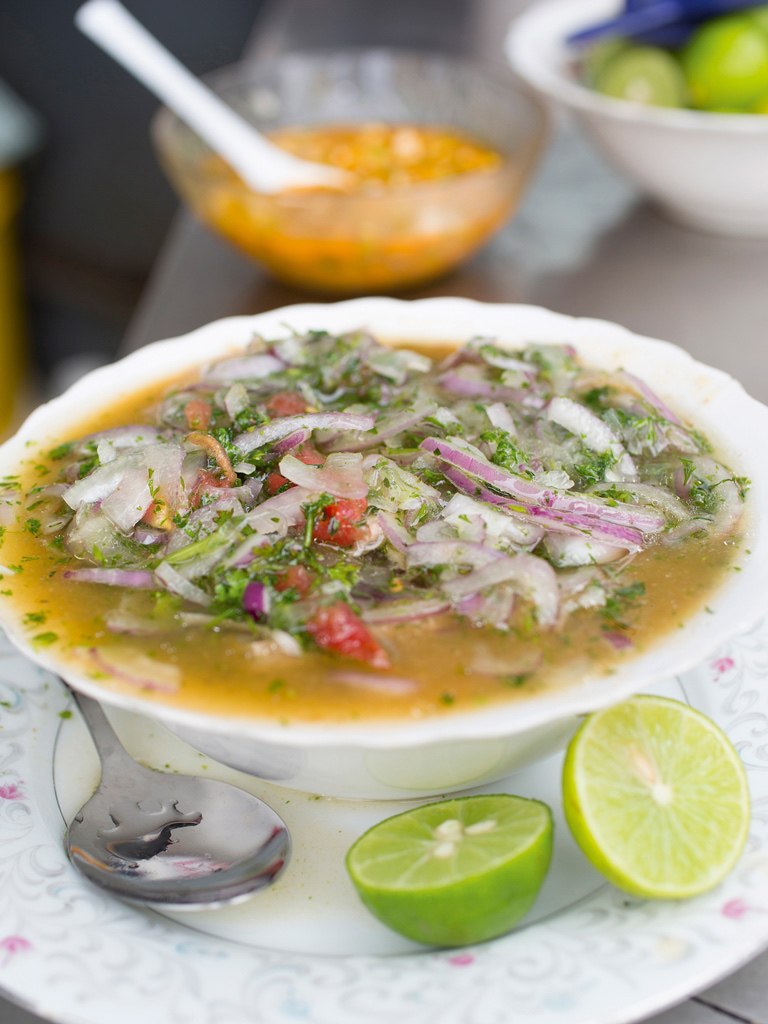 Lentils or beans? That is the question. This famous rice-beans-flattened-meat-and- plantain-chips is a staple in Guayaquil, and there are houses that do not eat anything else. Day in and day out.

The seco is a stew like reddish sauce that does not contain tomatoes; instead, the base is green peppers and a generic powdered hot pepper (although the dish isn’t spicy). The rice is smeared in achiote. The goat meat, which today is mostly lamb, was once popularized by the excess goats of the Galápagos Islands.

Guayaquil is a flavor tour. Some complaint about the city’s heat and humidity, or that the city is too crowded and busy (perhaps that’s because it is the largest city in Ecuador!), but its culinary delights are truly something to behold.

This invention brings together sea and land, with its fair share of tuna (albacore) in a cassava and red onion soup; many Guayaquileños curiously chow down on it for breakfast. 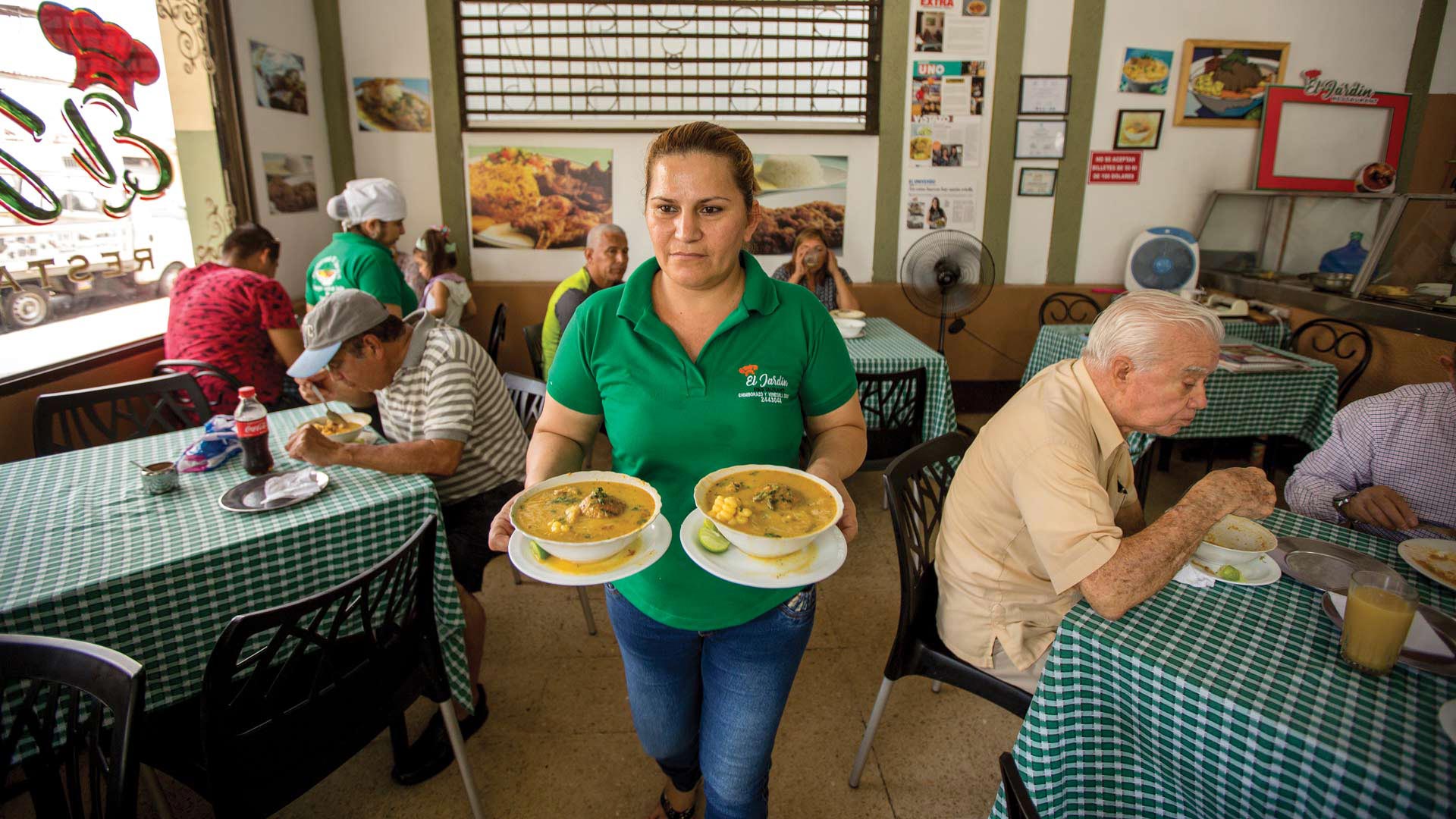 The guatita is beef stomach in a peanut stew; the Caldo de Manguera, or hose soup, features tripe stuffed with a mixture of rice and refried intestines; the bandera is a mix of local dishes, which include the two previous recipes.

A tasty street delicacy, a pork sandwich with a tasty onion sauce and pork rind.

A Guayaquil institution! A mashed green plantain is made into a ball, served dry with fried pork and a tasty onion sauce, or in a soup, with a filling of meat, hard-boiled egg and other ingredients.

Head to: For the soup, corner of Brazil and Chimborazo, for the dry bolón, Café de Tere (Hermano Miguel y Baquerizo Nazur, La Garzota), where you should also taste the delicious tigrillo.

A culinary staple of the city. The process not only of eating crab, but of buying them live at Caraguay Market, cooking them in the kitchen with the family and gathering everyone at the table, is part of Guayaquil’s DNA. It’s always better at home, but if you wish to to eat crab out, a favorite area in town is Miraflores.

Cocolón is burnt rice that has stuck to the bottom of the pot and is considered a delicacy amongst Guayaquileños. 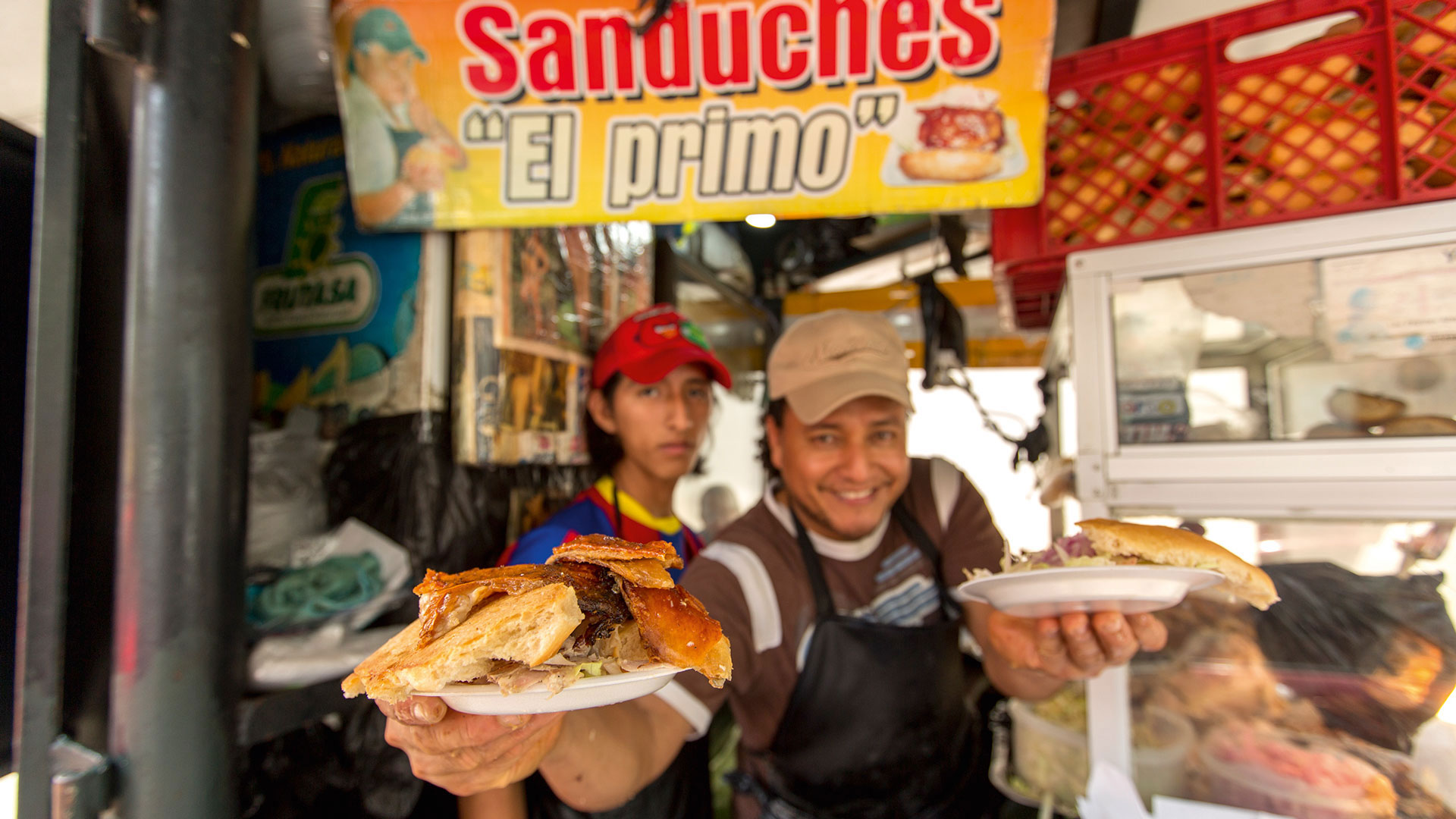 This is a very short review of the unique gastronomy of Guayaquil, varied and copious, both from the farm and from the sea… But there’s much more to explore, for sure!

The carreta (or food cart), and everything that revolves around it is an intrinsic part of Guayaquil, still very much in use, although it has probably changed radically from its original format. An important source of culinary creativity for Guayaquil’s varied and fascinating cuisine, the carreta is a fundamental piece of the Guayaquil cultural puzzle.

The dynamic of the food cart world works something like this: people push their restaurant on wheels around town until they find a specific corner, at first struggling for trade. If the aroma of their recipes and their operatic abilities at shouting out their virtues make the grade, someone will notice the ‘new’ place and try it out. If it’s good, they’ll bring friends. In time, long lines gather in front of their steaming containers. Their reputation may even reach “urban legend” status.

Here, strategies divide. Some take root and become fully-fledged, formal “dives” or picanterías, which, if things go according to plan, fan out across the city as different branches, or even franchises. Others remain true to their two-wheel roots, like Crucelina’s burger joint on 9 de Octubre, the carreta of cocolón and guatita on Ayacucho and Gallegos Lara, the “Sergeant’s” sausage soup on Calle Esmeraldas, or Encebollados ‘Don Pepe’ in the Bellavista neighborhood.

Once served by the carreta vendor, the clients ‘crouch’ on the sidewalk, or eat standing up, enjoying the taste of Guayaquil’s culinary essence (informal food kiosks and carts are also known as ‘agachaditos’, or crouchers). 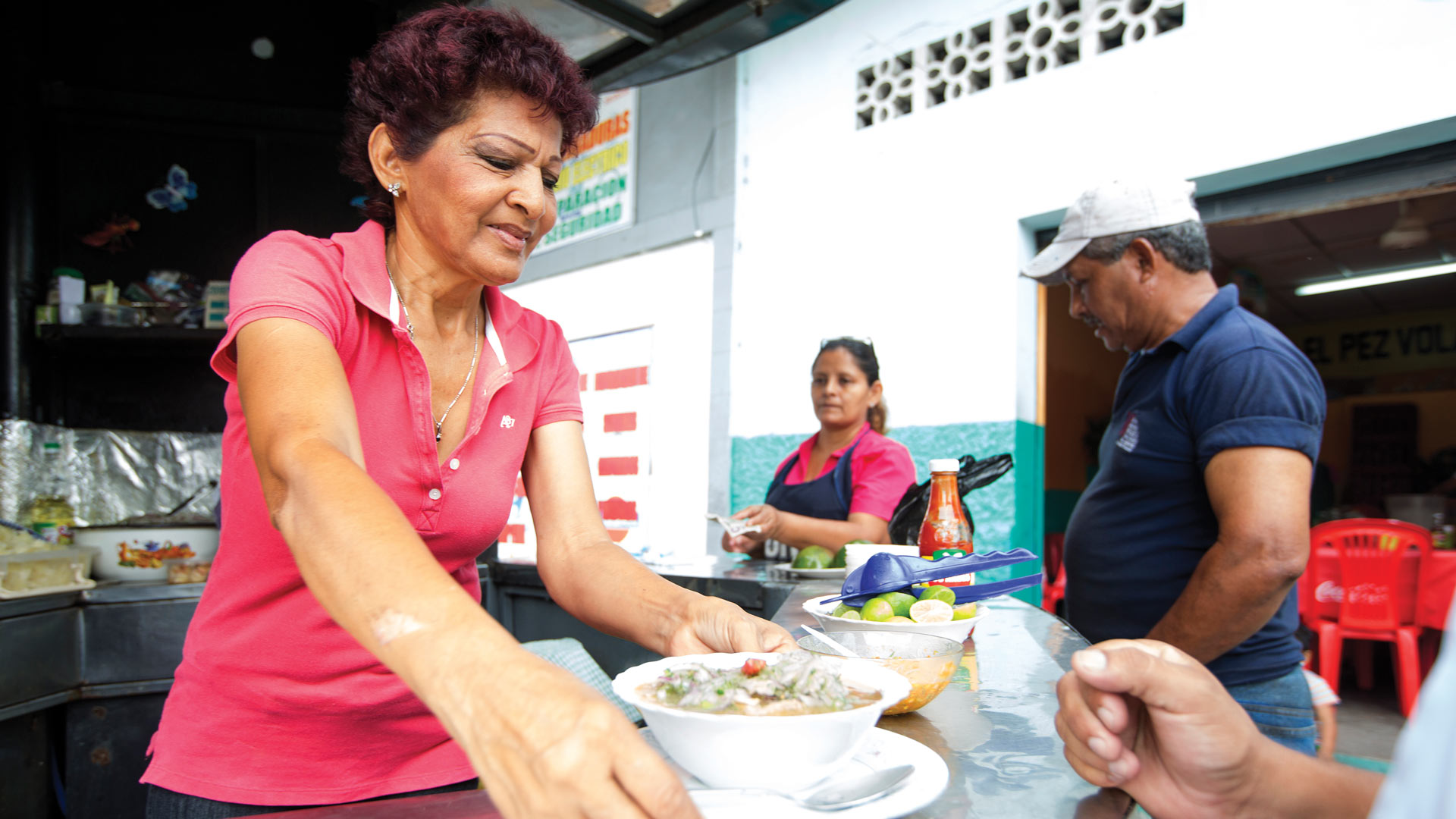 There are hundreds of small entrepreneurs who, week after week, request their permit to operate on Guayaquil streets, keeping the tradition of the old carreta alive. This ‘open restaurant’, popular on the Malecón over half a century ago, was originally a sophisticated wooden structure with wheels, that would transform into a food stand; one of the most popular was called La Fundadora (The Founder), serving the river’s denizens day and night.

“At the carretilla, everyone ate democratically,” explains historian Jenny Estrada, “from the high-hatted monsieur to the docker, from the banker to the shoe-shiner, from the nice girl to the prostitute, from river’s fishermen to peasant newcomers, the lonely and the lovers, the ‘gang of 9 de Octubre’ to the troublemakers down at the shipyard. Some had enough to order a full meal with rice, meat, and maduro (plantain), others could only afford the sauce from the seco’s stew.”