Where the giant things are: Urban art in Guayaquil’s ‘hoods

The story goes that during the Colonial period, the Inquisition didn’t reach the shores of the port of Guayaquil with quite the fervor or fury it did elsewhere. To counteract this, the town’s more Puritanical citizens made the most of the custom of burning clothes to eradicate the scourge of yellow fever by dressing them up with masks, thereby creating efigies with which to demonize their perceived “enemies of the people”.

Through the twists of fate and history, the Guayaquileño’s picked up this tradition and ran with it. Big time. It evolved from this ritual (and necessary) burning, to the tradition of children in the Astillero shipyard neighborhood collecting woodchips and sawdust with which to fill their puppet ‘Old Man Year’ models, on to today’s incarnations made of lurid papier maché, depicting characters from fiction, fantasy, politics, sports, filling up no less than eight solid blocks of the Avenida 6 de Marzo… and finally to giants towering nine meters high. The latter are material proof of the incredible urban artistic creativity that bubbles up in these working class barrios, far beyond a simple marking of the passage of time. 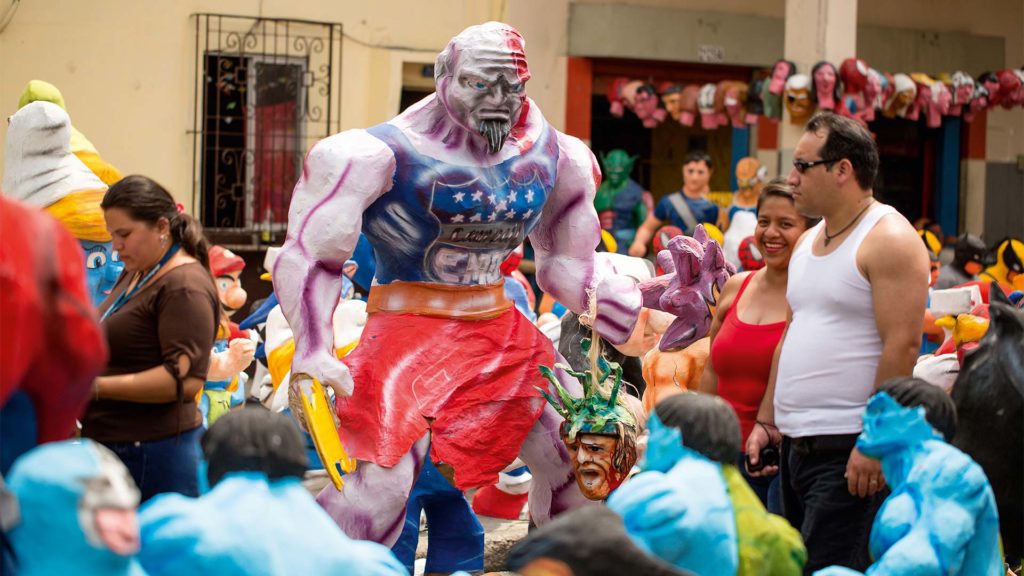 December 31 every year, in every house on every block, they live a collective catharsis of sorts, where elation and faith mix at the moment when a chapter ends and a new one begins. 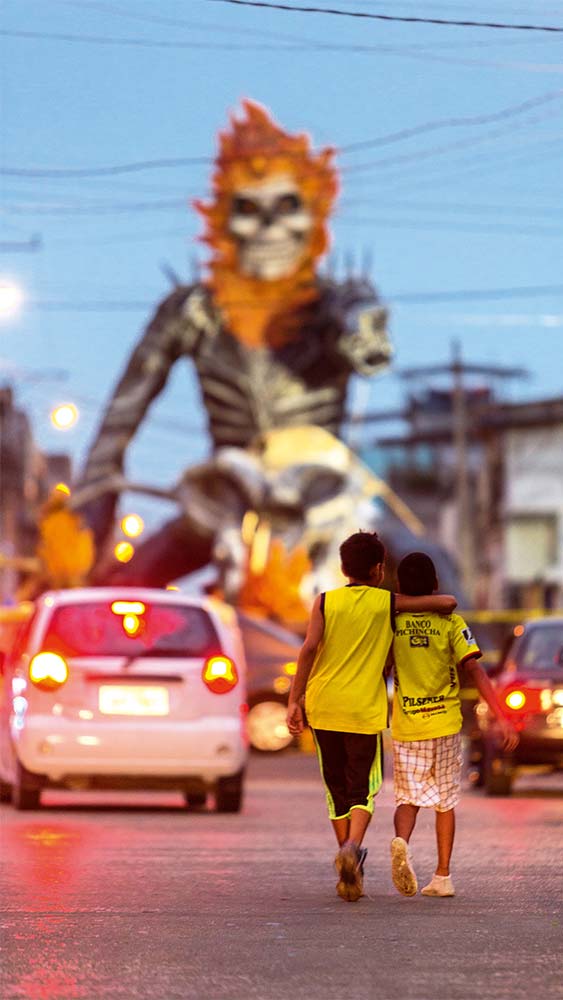 Six years ago now, in the neighborhood of Sur Oeste, at the junction of Argentina and 28 streets, urban Guayaquileño artists unleashed their imagination, building a huge replica of the Titanic. When it came to its burning, the ship had to be (ironically) doused with water as the flames threatened to overwhelm surrounding houses and overhead cables. The passion of the locals wasn’t extinguished, however. They’d tasted the glory of the impact of these vast creations and wanted more. The era of the giants had begun. Guayaquil’s Yuletide skyline has never been the same since.

A rat pack of urban artists has since joined in the fun: Boris Cajas, Gabriel Medina and Felipe Sosa, Carlos and Eduardo Vilema, Kevin Rondal , Carlos Célleri, and many more. Each has added their vision, their humor, their wit to the mix, creating a spontaneous Art of the Giants route for the curious from across the city – who’d never otherwise have bothered coming here – to wander. All sorts of peripheral activities and attractions have, inevitably, sprouted from this bed of artistic elephantitis: street performances, concerts, colorful rides on fluorescent carts, toffee apples, sea snail delicacies… The artists charge one-dollar-a-photo (50 cents if you take the photo with your own camera) which goes some way to offsetting the money and time (nearly two months) invested, and all the materials required to create these goliaths: about 50 pounds of newsprint, paint, wood, glue, and an idea in their heads that creativity and skill convert into these fantastical figures. 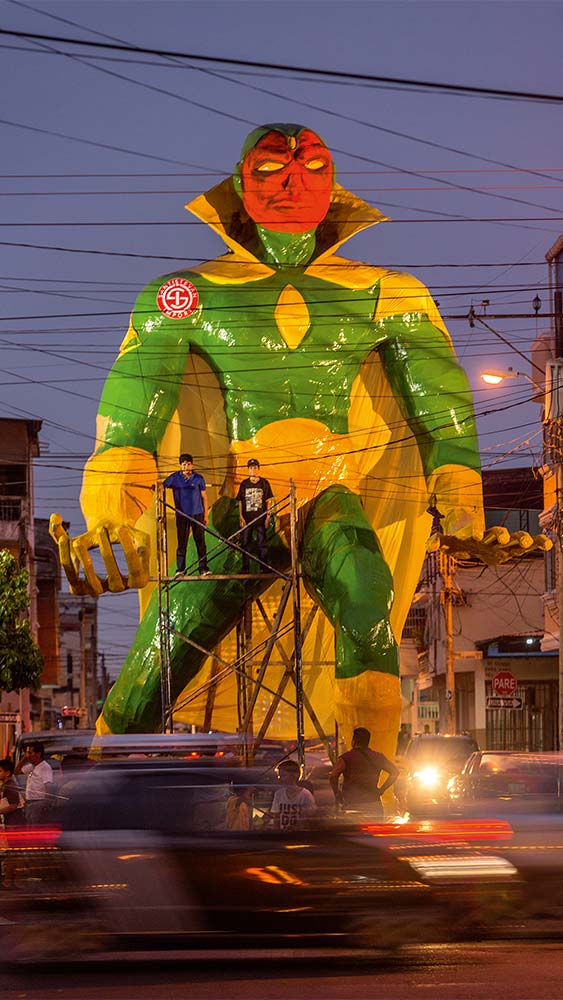 Although health-and-safety restrictions today limit the use of explosives, nothing can dampen the spirits of Guayaquileños wanting to celebrate the end of another year with a hug and some whizz-bang fireworks on every neighborhood corner. On

December 31 every year, in every house on every block, they live a collective catharsis of sorts, where elation and faith mix at the moment when a chapter ends and a new one begins, imbued with new promises and fresh challenges. Meanwhile the giants look on, awaiting their turn, when in two weeks’ time they’ll burn to a cinder (under the watchful eye of the local firefighters…). 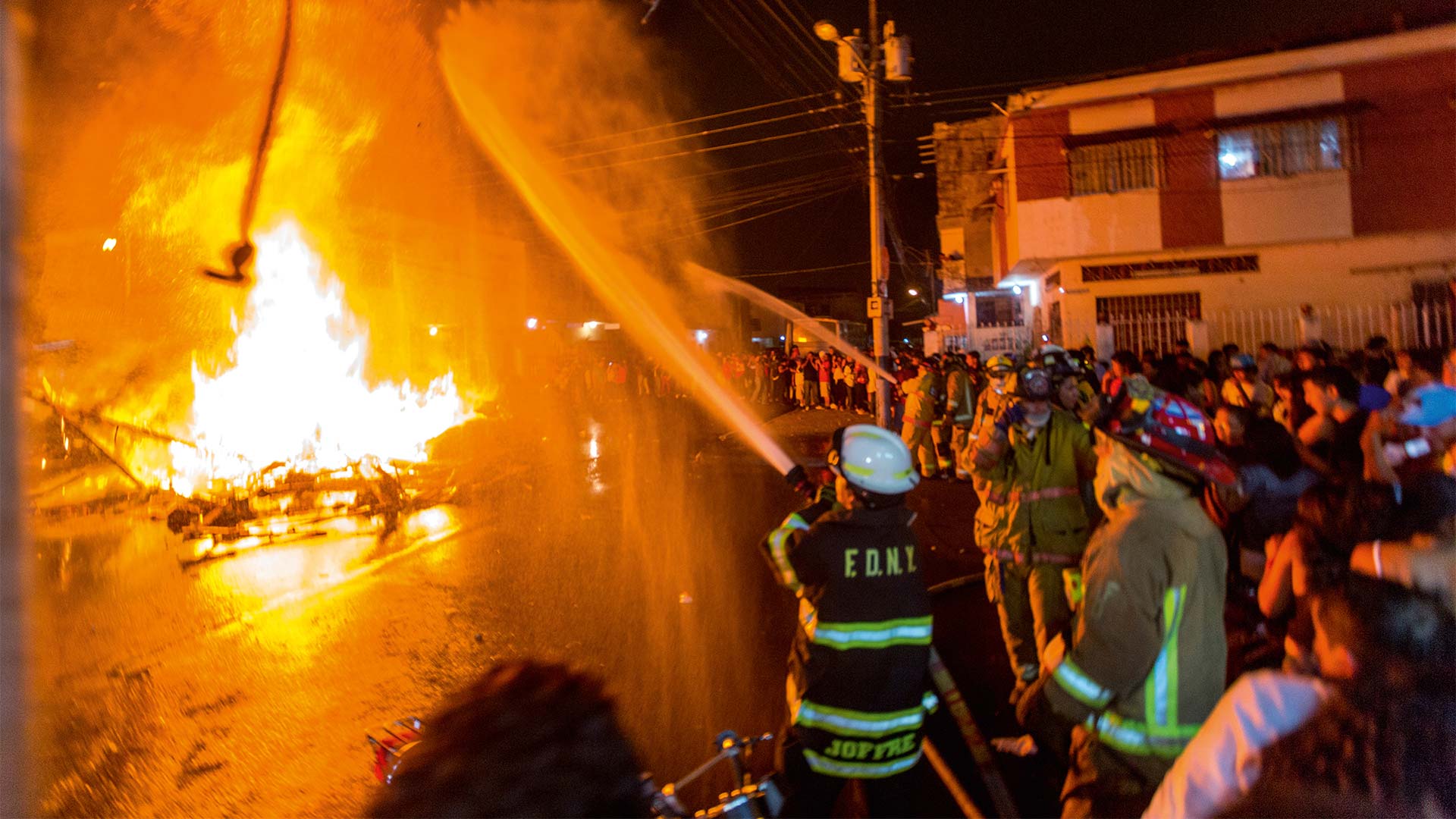