What to do during Holy Week in Ecuador

Holy Week unites the entire country in celebrations, in churches, streets and homes. It is a tradition honored in Ecuador for centuries, its main expression: the various processions that take place on Good Friday, in towns and big cities with a range of characters, from the “cucuruchos” (which, we promise, have nothing to do with the KKK… and are purple, for that matter) and “veronicas” to Devils, Christs and Virgin Marys.

If you have never witnessed the manifestations of faith in Quito and the outskirts, it is worthwhile to do so. Holy Week in Quito is the holiday of holidays, a spiritual celebration that lasts a week and involves hundreds of community leaders, volunteers and institutions (many of them religious, but others secular), thousands of outfits and millions of onlookers who come together and collaborate to fill the streets with color and devotion.

Not to be missed

The most impressive, colorful and striking multitudinous event in the country is undoubtedly the Friday procession Jesús del Gran Poder, which makes its way across a large segment of the Historic Center of Quito.

But other eye-catching events include the Arrastre de Caudas on Wednesday at the Cathedral, the Diablada (Devil’s Dance) in La Merced and Alangasí (on Friday and Saturday), and on Thursday, the Procession of Silence and the visit to the 7 Temples, among other liturgies.

Other celebrations in the outskirts of the city include Puéllaro’s “andas” (or float) procession and the secular Diablada and other liturgic processions of Alangasí (where one encounters towering cones that must kneel when crossing the streets in order to avoid the telephone wires!).

A parallel procession takes place a few miles South organized by 25 families from different South Quito neighborhoods. The route is lined by thousands of onlookers, who have come to see some of the many characters involved. Some of the most extraordinary include the Heavenly Souls (almas santas) and the “Chimbacalle Turbans,” both of which don very tall cone-shaped cucuruchos. These surreal and absurd headdresses, some decorated with ribbons, others black or purple vary in height, but those worn by the Chimbacalle Turbans reach the second floor of many of the buildings they pass by. 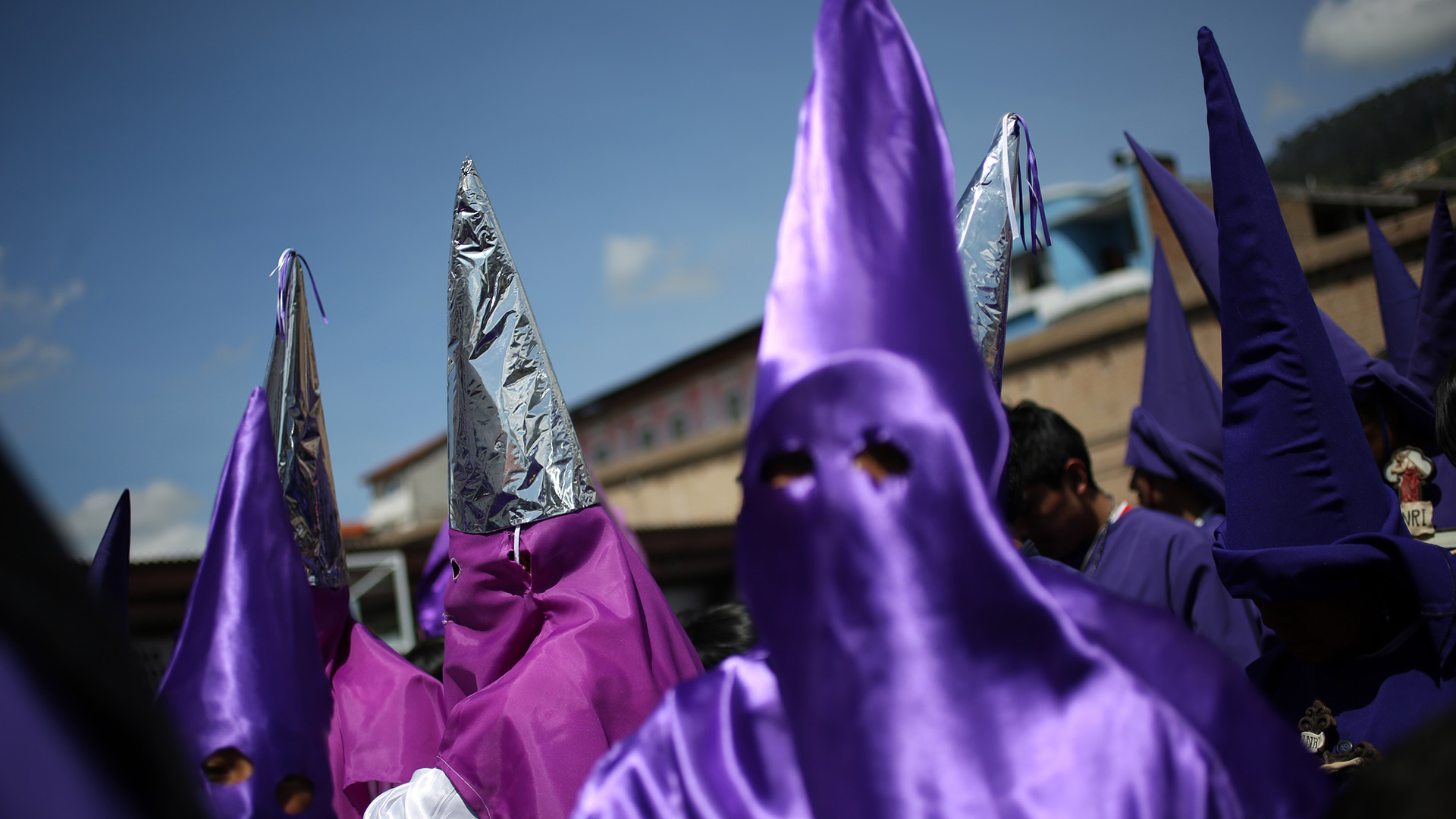 Dragging of the Robes in Guaytacama

Although we once thought the Dragging of the Robes celebration only took place in very few places in the world, The Cathedral in Quito being one of its most important venues. But on our journeys with Ñan we discovered, in the small town of Guaytacama, a popular and very intimate version of the same ritual that very few people know. If you are traveling south or in the Cotopaxi area, you may want to check it out! It takes place on Good Friday (it begins at about noon and continues through the evening), although it originally was observed every weekday of Holy Week.

On the evening of Maundy Thursday, the people of Tungurahua, a region in the heart of Ecuador, begin their over 40 km “Walk of Faith,” which will take them to Baños, a nearby town, where the congregation honors the Virgin of Holy Water.

Meanwhile, in Paccha, northeast of Cuenca in the south of the country, worshippers spill over 30 blocks attending the procession of Our Lady of Sorrows. Here, unlike other parts of the country, the central image is the Virgin Mary. Starting in the early hours, people flock to wipe the face of this image. The mass then commemorates the solitude of Mary, then at night a statue representing her is raised on a wooden base and carried, along with Saint John and the Via Crucis (a sculpture of Jesus carrying the cross), through town. There are also Holy Souls characters with tall conical headdresses. They are represented here by residents of the neighboring town of Guagualzhumi, and sing the Passion of Christ in Quechua.

Guachapala, just northwest of Cuenca, draws migrants (and their families) year round to seek protection from the Lord of Andacocha, popularly known as the “Lord of the Migrants.”. The Good Friday procession begins in the main square, and travels some four kilometers to reach the Lord of Andacocha Shrine. The shrine contains a tiny image, which despite being barely visible from the altar, attracts thousands of people from all across southern Ecuador.

Residents of Valdivia and Barcelona stage the Stations of the Cross along four kilometers of highway. Their pilgrimage includes a crucifix mounted on top of one of the hills in Valdivia. And in the coastal province of Manabí, where Good Friday is known as “Friday of Sorrows,” they serve 12 dishes; some made with fish, others with vegetables, while others are milk-based dishes, like rice pudding or sweet corn cake.

The other large procession, the Comfort of Christ (or Our Lord of Comfort), takes place in Guayaquil, where despite the tropical heat, thousands accompany images of the suffering of Jesus as he walked to Calvary and hundreds of curious onlookers line the streets. A float makes its way slowly along the route carting a floral display of Christ on the Cross. Trailing behind are dozens of people walking barefoot, some with large portraits or images of the Virgin Mary and others carrying candles in their bare hands; the hot melted wax burning into their skin. Along the 16-block route, worshippers recite prayers remembering the 14 Stations of the. In Guayaquil there is also a very popular procession that takes place in the Guasmos, favela-like invasions in the city outskirts. 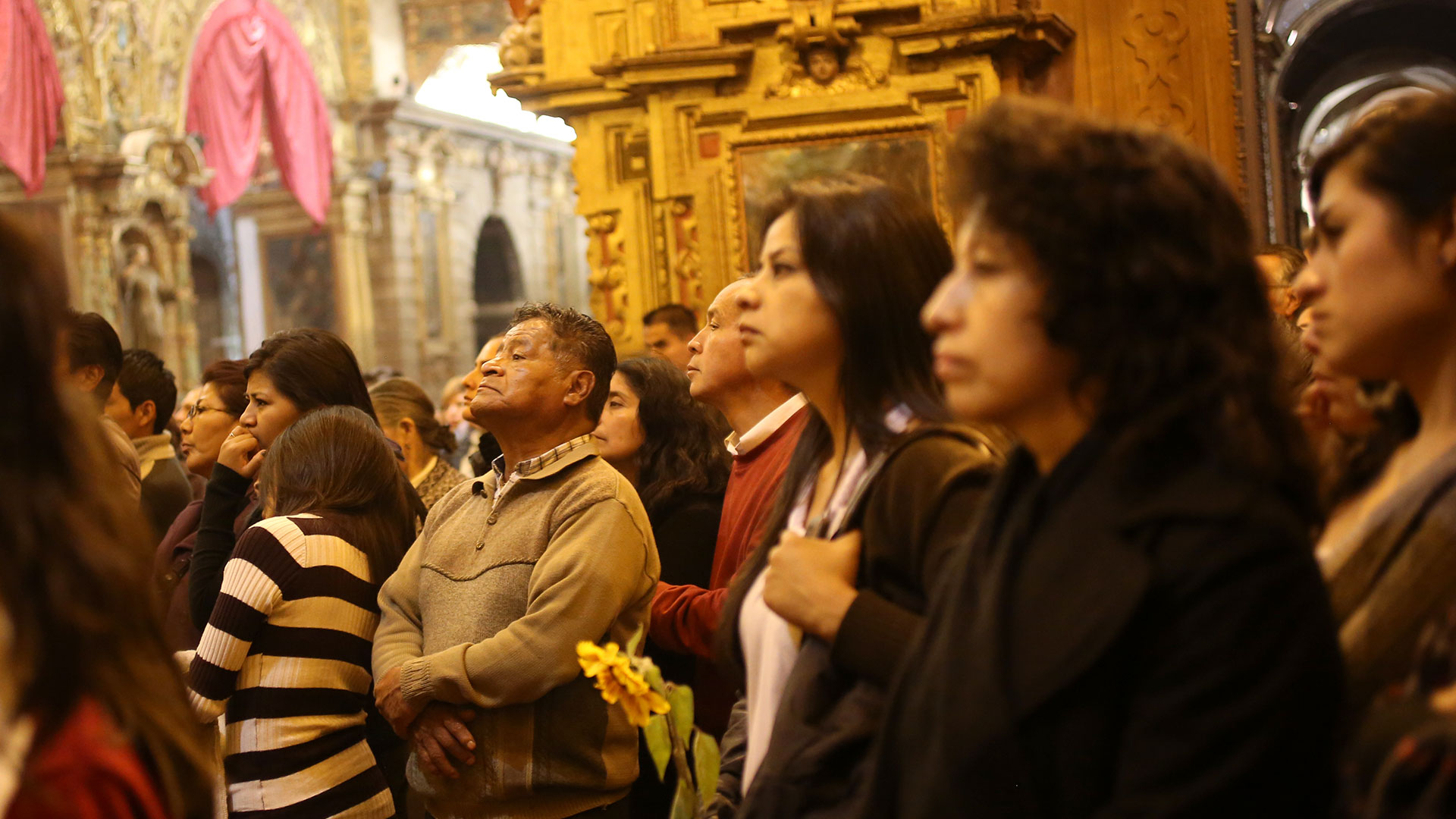 Meanwhile, in the Amazon Basin, the indigenous communities of Napo visit family living in other communities and share bushmeat and chicha, a fermented yucca drink.