The Waorani have made headline news in recent years. Their position at the crossroads between the civilized world and living in the jungle with spears has generated a new awareness and many questions: can we protect the Amazonian rainforest, and Ecuadorian identity itself, without understanding the people that inhabit it? Faced with the ongoing sale of the Waorani’s ancestral territory to oil companies (including Yasuní National Park), these peoples remain a key piece of the political puzzle. And at the very depths of their territory, an unusual tourism project takes us to the very heart of the Waorani’s reality.

Otobo’s history, his lineage, his relationship with the world – both ours and his – is exceptional. It reads a little like a myth, more magically real than any García Márquez novel.

Although Otobo’s clan lives in the nearby settlement of Boanamo, on the banks of the Cononaco River (a 10-hour canoe ride from the frontier port of Shiripuno), Otobo has decided to live with his immediate family in a secluded homestead deeper inside the rainforest.

He says, somewhat ambiguously, he maintains contact with the Taromenane, a Waorani clan that voluntarily has reserved its right to a nomadic non-modern life (see next page). They sometimes steal his crops from a small farm he keeps. He doesn’t mind. That’s the law of the land here. Perhaps it even stands as a token of respect to their integrity.

Otobo’s grandfather, Kempere, is what they call a ‘jaguar’ shaman. According to Otobo, he doesn’t require hallucinogens like ayahuasca to reach the different worldly and unworldly realms of the forest, falling into deep trances that come to him through what is known as ‘the eyes of the jaguar’, a spiritual presence that allows him to see into the immediate future, as well as into the future of the Waorani people as a whole.

The world according to the Wao

As the original ancestral settlers of the area between the rivers Napo and Curaray, the Waorani can be traced back to pre-colonial jungle societies and currently struggle on many accounts, from defending their natural territories to adapting to the modern world. 60 years ago, the tribe was completely unknown to Western civilization.

Although most, today, have succumbed head-on to its lures of technology and possession — they wear clothes, have smartphones, are on facebook – their initial reaction towards anyone trespassing in their territory has been a violent one. Kempere himself is said to have speared missionaries in the 1950s. He is over 90 years old, perhaps 100; perhaps even 110, no one knows for sure.

Otobo, who may be in his forties, has been, as he understands it, 26 for a decade now. He, like most Waorani, has a skewed sense of time. Monday can actually be after Wednesday in his weekly calendar, and he can take you on a hike for two minutes (which means 30 minutes real-time) and tell you you’ll be arriving in a minute (which means another half an hour).

There are no numbers after twenty in the Waorani language, so most things lie in the greater categories of the ‘thousands’ and the ‘millions’. His Spanish is weak, but it is far better than his father’s, who pantomimes his way through stories he tells non-Waos (usually about spearing wild animals). 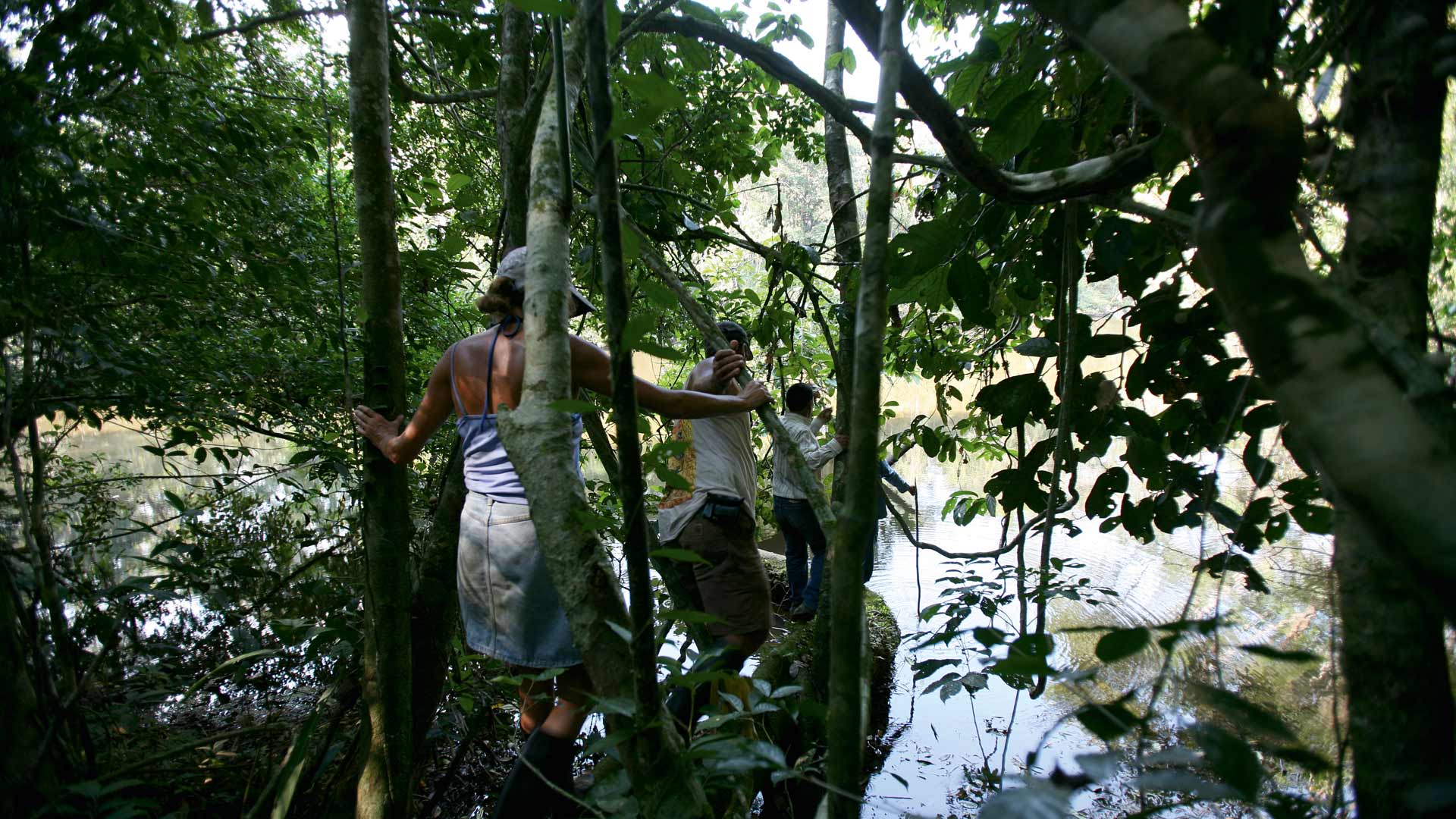 A decade ago, Otobo decided to open his personal jungle world to outside visitors. He has created one of the most extreme adventures our country has to offer. It takes from 2 to 3 days to get to a camping site he built near his home, where he takes care of everything, including cooking delicious river catfish (bagre de río). He shows you around, takes you to numerous salt licks, visited by tapir and countless birds; he canoes you to see river dolphins (one of the best places to see them is here); anacondas are common.

He wears only underwear all day and his wife hangs around topless, as is the custom. His extended family from Boamano crashes whenever they feel like it… they help out guiding and visitors may even get to hang out with them at dinner, a real-life Waorani extravaganza of feasting, dancing and telling stories. They always leave a mess for Otobo to clean up!

His three-year-old son, a veritable four-leafed clover, has twelve fingers and twelve toes… and when Carmen (which is his wife’s easier-to-pronounce Spanish name) wanted to amputate the extra digits, as modern doctors had suggested, Otobo was unyielding. No way was anyone going to take away the ancestor from his baby: a legendary relative also shared the 24-digit prodigy.

Otobo’s tourism project is one of the most quintessential cross-cultural experiences you could ask for, at the crossroads of two opposing visions of the world. Civilization versus life in the jungle… a taste of this will definitely change your outlook on the world. Otobo, who’s name means ‘basket’, carries within him the gift of an open mind, and the love of sharing his world with anyone who dares visit his tangled home.