The three Juanes, with fists and letters

Ecuadorians may know these Ambato writers by name, as important creators of early Ecuadorian literature. But do they know their motivations, their true contribution and their story within the political context of the fledgling nation?

Juan Montalvo and Juan León Mera were the golden duo of the early republic, two minds who sewed the first shoots of a national “culture”, the “geniuses” that embodied, on paper, the great debate of what was, at the time, the fragile, uncertain, Ecuadorian identity.

Both wholeheartedly dedicated their energy to the poetic life, to the arts, to literature, to thought and philosophy. They learned to define and refine their sensibilities and nurtured the closest thing to an “Ecuadorian” literature. The national anthem, volumes of essays and poems, the “first modern novels”, as they have been called, of Ecuador…

Both literary figures were born in Ambato. Another coincidence: they carried the same name and, still another, they were born the same year, two years after the creation of Ecuador in 1832. And yet, two more contrary souls could not exist on this Earth. 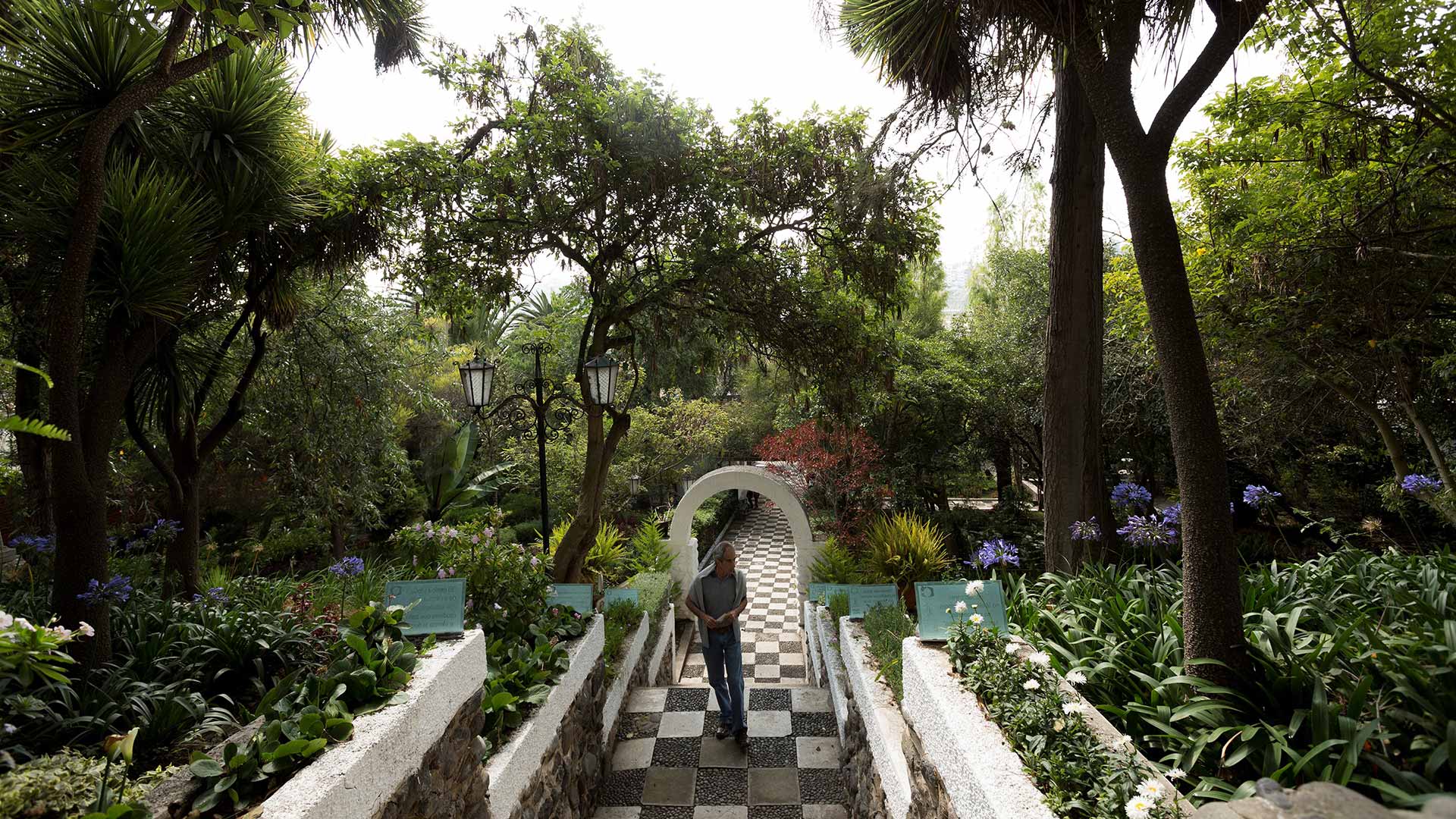 The most obvious reason for their incompatibility was strictly political. Juan Montalvo was a liberal while Juan León Mera, a faithful conservative. The moment in history in which they lived was profoundly dictated by these two positions in life. President García Moreno, a die-hard representative of the establishment that had installed itself since independence, found a stubborn opponent in the tenacity and idealism of liberal Eloy Alfaro, the man who was to lead the spirit of change that sooner or later would engulf the young republic and defeat the status quo.

This is how the late decades of the 19th century and early decades of the 20th century played out, amidst unrelenting quarrels, both armed and intellectual, each side seeking to impose their vision of the nation’s future. Both camps found, in Mera and in Montalvo, respectively, mouthpieces for their political stances.

Eloy Alfaro recognized in Montalvo’s pen an crucial ally and communicator. He became Montalvo’s patron, despite not knowing him well. He paid for his travels to Europe, and arranged for his stay there, funding him directly, on occasion, as Montalvo produced reams of scathing pamphlets and personal letters directed at President García Moreno. Later, he directed his criticism at the conservative leaders who followed. Montalvo’s tirades became famous.

He was and is still regarded as one of the finest insulters in the Spanish language. His poisoned invective knew no bounds. “My pen killed him!” he famously exclaimed when he learned, in exile, that García Moreno had been murdered in 1875.

Celebrated writers of the Spanish language —including the likes of Rodó, Unamuno, and the celebrated Guatemalan poet Rubén Darío (who said of Montalvo, “How can you not reach the zenith, if Cervantes takes you by the hand?”)— all recognized his gifts. His work was prolific. Always fierce. Always anticlerical, liberal and passionate. 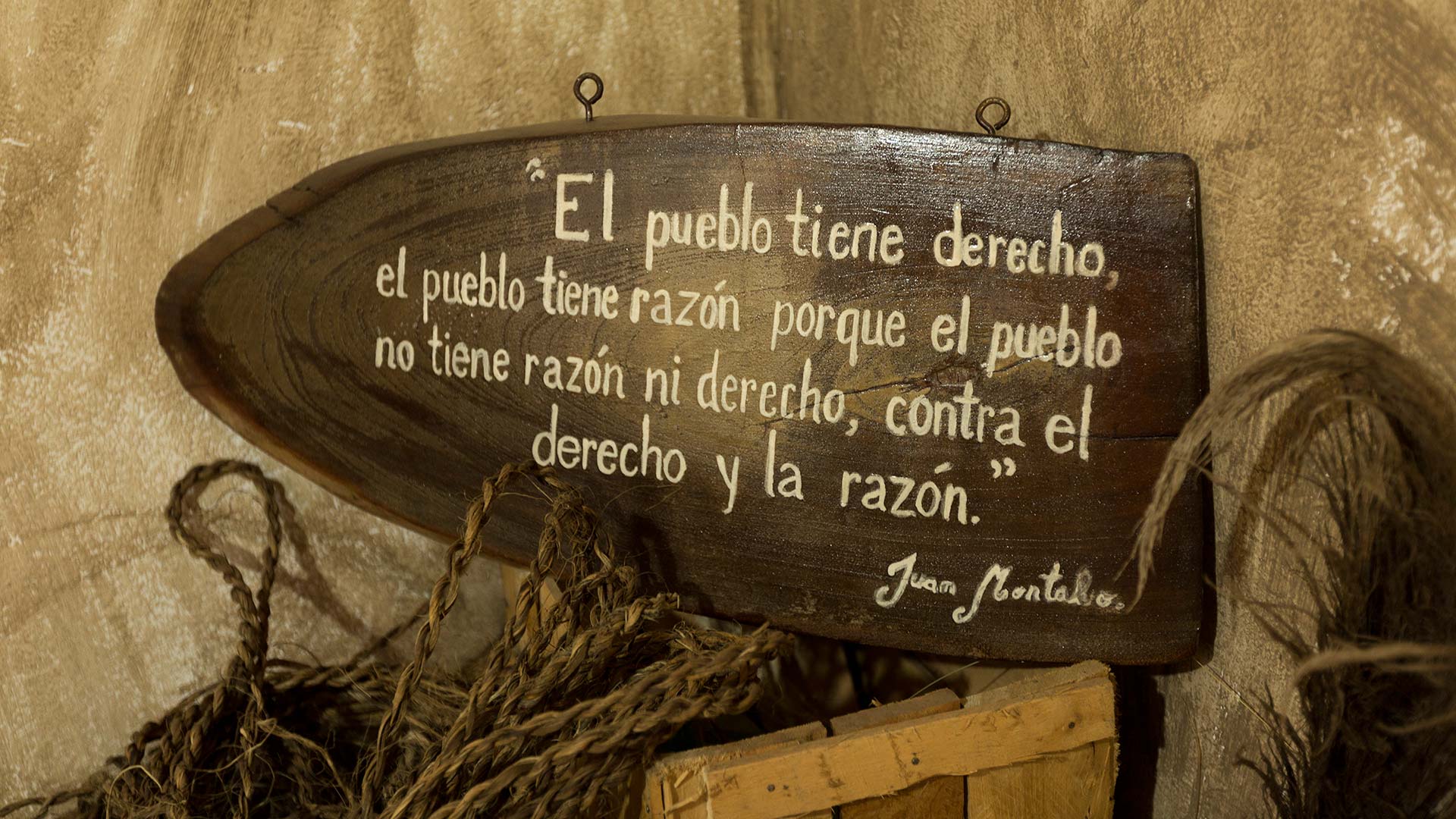 – Discover some of Montalvo’s most classic quotes at his quinta, in the suburbs of Ambato –

He was a furious antagonist of “dictators”. He labeled the elected government of Ignacio de Veintemilla as a “perpetual dictatorship”. This Veintemilla was the Ecuadorian politician Montalvo hated most. He dedicated his opera prima of insults, Las Catilinarias (1882), to him, twelve essays that turn political bullying into art.

He then immortalized the same character in his fabulous posthumous work “Capitulos que se olvidaron a Cervantes” (Chapters that Cervantes forgot, 1889), turning him into a man hanging from a tree picked apart by crows. “Or I know nothing,” says Montalvo’s Don Quixote when he sees him, “or this is the famous thief who once called himself Ignacio de Veintemilla.”

Juan León Mera, on the other hand, could not have been more different. He was a man of the land, immersed in farming and agriculture. He spoke native Kichwa. He disliked provocation. He was more of a romantic, a passionate, religious man of moderation, shy and circumspect. His work for the most part was pious, praising religious figures, writing tributes to clerics, penning an obligatory ode to the memory of García Moreno, his protector. 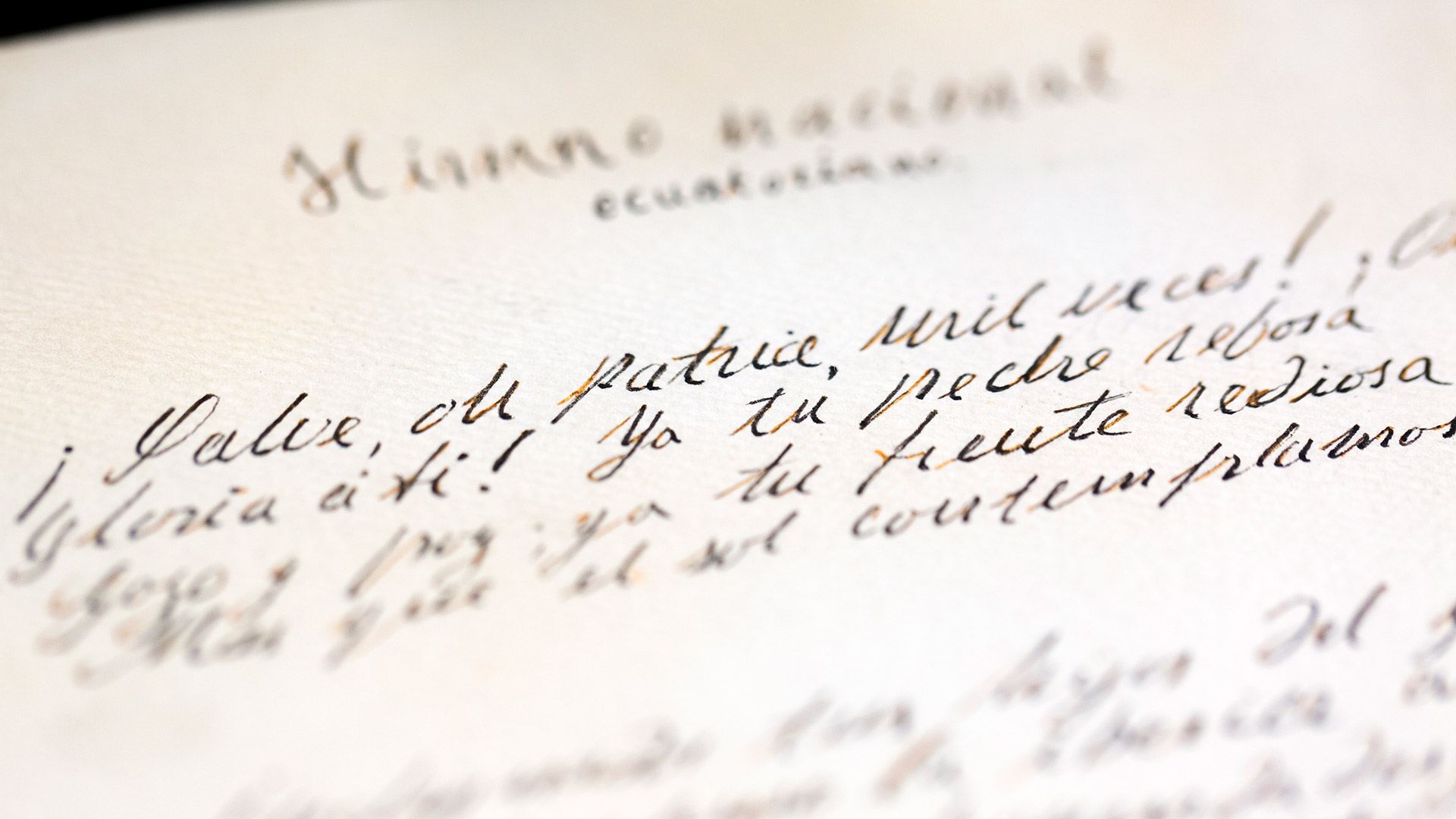 He defended conservative ideals and held a long list of government positions, which provided him with a living. From this privileged position, he was the natural choice to pen the lyrics of Ecuador’s national anthem, an assignment personally conferred on him by García Moreno himself. And after García Moreno was murdered, Mera drafted the doctrinal bases of the Ecuadorian Conservative party.

Later, a series of indigenous revolts prompted him to write what we now regard as Ecuador’s first novel, which is not very different from the Cervantes-inspired novel Montalvo would later write, in the sense that both were inspired by European literary references.

Mera’s novel, Cumandá, drama of two savages (1877) draws on the romantic classic Atala, love of two savages by François René de Chateaubriand. Not only does it use the same subtitle, but also its entire plot, replacing places and names circumstantially. It was not considered an act of plagiarism as we would understand it today. Juan León Mera did it on purpose and certainly didn’t hide the fact.

He took the same story but extrapolated it to the world he knew, inspiring himself on the family quinta (which by the way you can now visit, along with Montalvo’s) where he grew up, in order to extoll his position in the face of the growing wave of indigenous violence sweeping the country. With it, he was offering his own “romantic” morality, in the same way Montalvo employed Cervantes’ work as a framework for his political criticism.

We are speaking of proto-novels after all, and the re-appropriation of European tropes was key to their respective premises. It may seem artless to our contemporary eyes, but at the time it wasn’t: both writers employed their literary skills to replicate the masters. No matter their true literary merits, Montalvo and Mera had achieved something that neither realized at the time: they were bringing universal classics into an Ecuadorian realm. They “Ecuadorianized” them!

With the perspective of time, perhaps we can understand the precocious literary works of Mera and Montalvo as a valiant step towards an Ecuadorian literary voice.

For both writers, a literary “act” was still a political act. They were so consumed by their own political vocations (which is why they wrote, after all), that penning a novel simply for the fun of creating a fiction made little sense to them. We would not have to wait long, however, for another Ambato native, Luis Alfredo Martínez, to come up with the real deal and publish A la Costa (1904), a work that consummates what his masters (and in the case of Mera, his cousin) had hinted at, creating Ecuador’s first long-form piece of completely original fiction inspired by the Ecuadorian “condition”.

The work also fulfills a fantastic precedent: it brings together the distant realities of the Coast and the Andes under a single cover. What a pertinent way to Ecuadorianize the country’s first “great” novel! 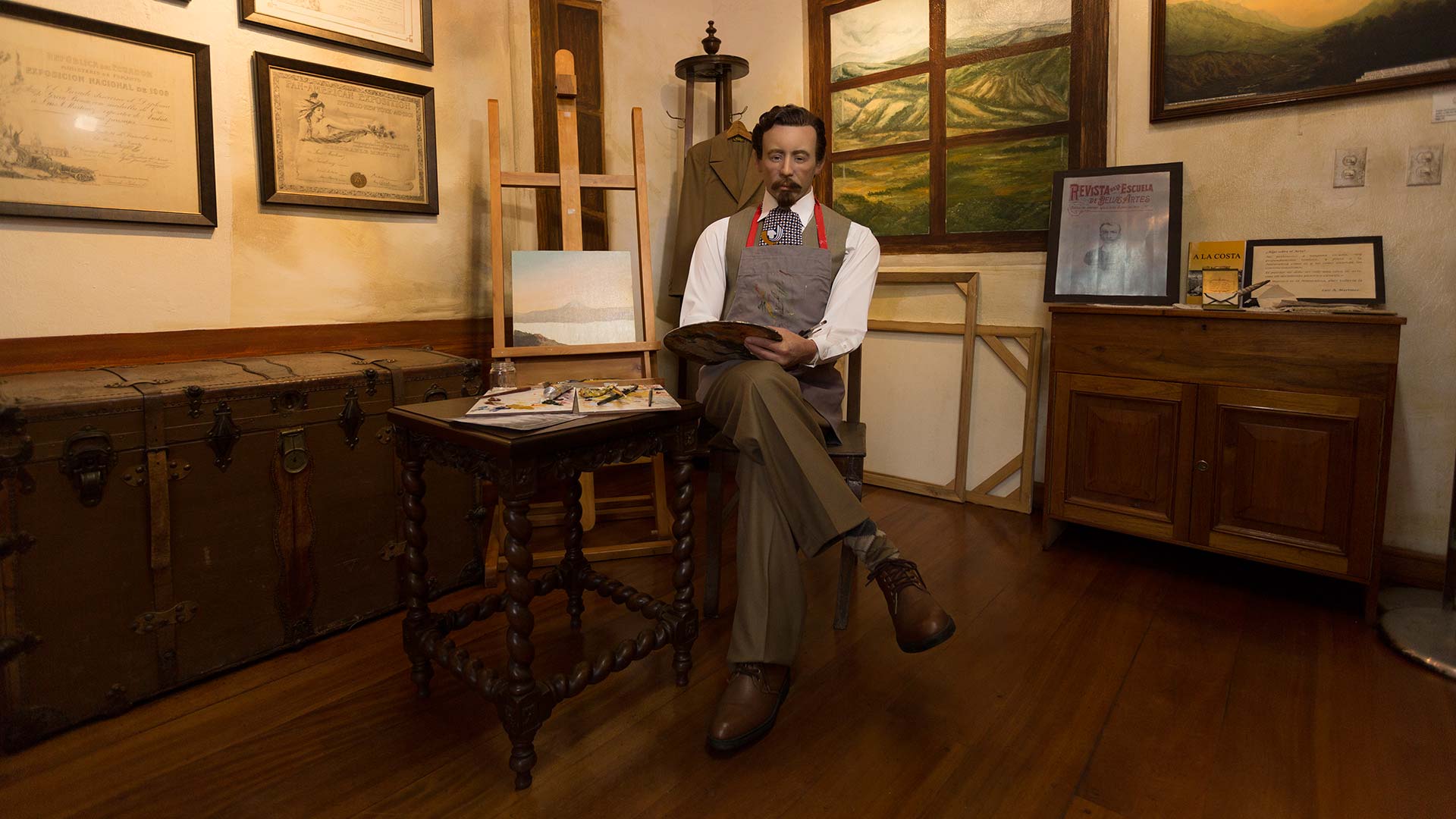 Montalvo and Mera kept their distance in life. While Mera was an ideal target for Montalvo’s attacks, the former only dedicated two mildly offensive leaflets to him at the beginning of his career; and Mera also learned to avoid provocation. Historians only confirm one moment in which they actually came face to face. The outcome was predictable: they threw some punches at each other and, legend says, sticks as well, in the outskirts of Ambato… For the most part, however, each stayed clear of the other.

It’s perhaps easy to be cynical when recalling the third of the “tres Juanes”. Did literary historians simply take the first Juan that came along after Mera and Montalvo? As an Ambateño figure of the time, the third Juan, Juan Benigno Vela, seems obscure and little-known. He became blind, and deaf, mysteriously, at 33, and died in poverty. His life is poorly documented.

He was a writer, an essayist, a politician and, like Mera and Montalvo, although ten years their junior, held strong convictions. He was a staunch liberal. He was a personal friend of Eloy Alfaro. Montalvo died before seeing the liberal movement triumph, but Vela witnessed Alfaro’s rise to power, something he had yearned for fiercely. Yet when Alfaro became a dictator, Vela was quick to denounce him. In this way, and almost poetically, he provided the dénouement to the cumbersome novel that Mera and Montalvo had begun decades earlier. 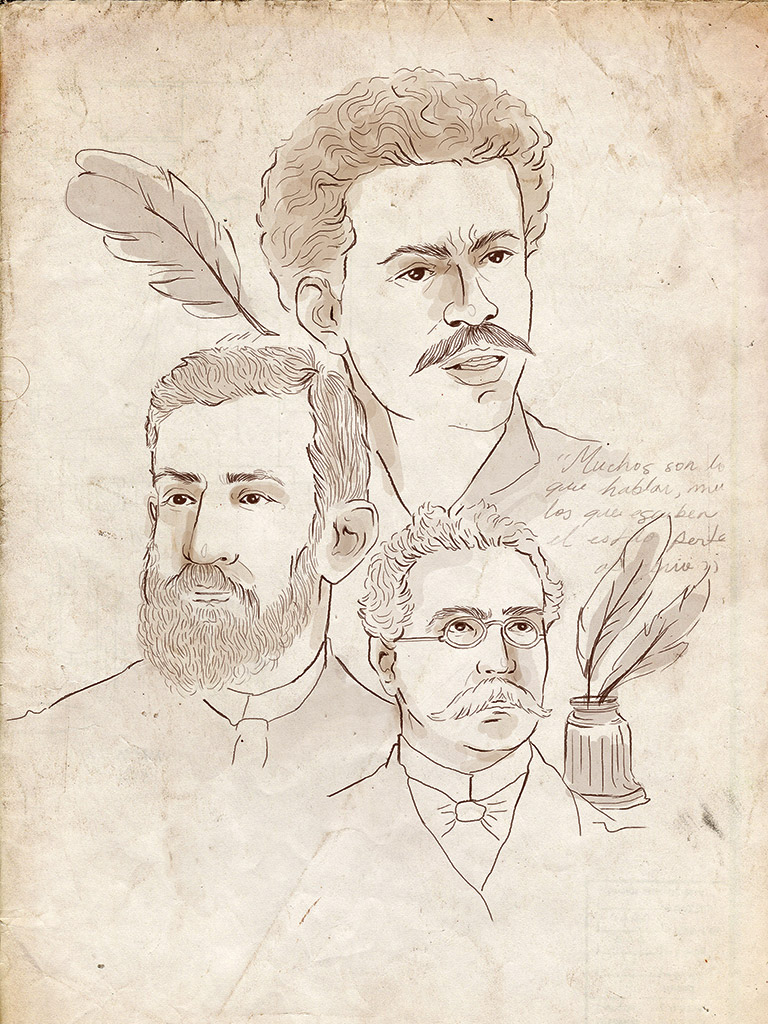 Juan León Mera had used the word to build the foundations of his conservative idealism. Juan Montalvo was, in turn, a passionate defender of the word as a weapon of resistance: “I may not be as famous as the great warrior captains who win battles, but I have also fought… for freedom and civilization… with my pen.”

Juan Benigno Vela saw in the word the final recourse to integrity. In the disillusionment of his later years, he would painfully close that difficult chapter of the civil war between conservatives and liberals in Ecuador. For the early Ecuadorian republic had failed to live up to the ideals for which the three Juanes had spent so many words fighting for. In Vela’s pen, it was literally time to turn the page: “I no longer have a leader; my ideals have disappeared; I will die alone with my own ideas. Do not expect them to change”.