Otavalo is, like everything else in Ecuador, a cultural melting pot that, despite the myriad influences that affect their way of life, has become a unique and inimitable expression of cultural identity. It would be absurd to reduce an Otavaleño to his pre-Columbian Inca past, or think of him as just an ordinary Ecuadorian; the Otavaleño is really the sum of his parts.

No less surprising is how deep their idiosyncrasies really run. Their identity seems anchored to the way they walk, to the way they dress, to the way they work, organize themselves within their communities and relate to others. You can find examples of this everywhere: from spiritual expressions, festivities, rituals, social customs, even the way in which they contract marriage.

It is commonplace to talk about their weaving talents, which probably date back several millennia, before the arrival of the Incas. These conquerors from Peru recognized their skills, and brought llamas and alpacas into the region in order to produce more and better quality clothes on their backstrap looms. Shortly thereafter, came the Spaniards, who, in their ‘obrajes’, employed most of the working population, leveraging their abilities and exporting the textiles far and wide. 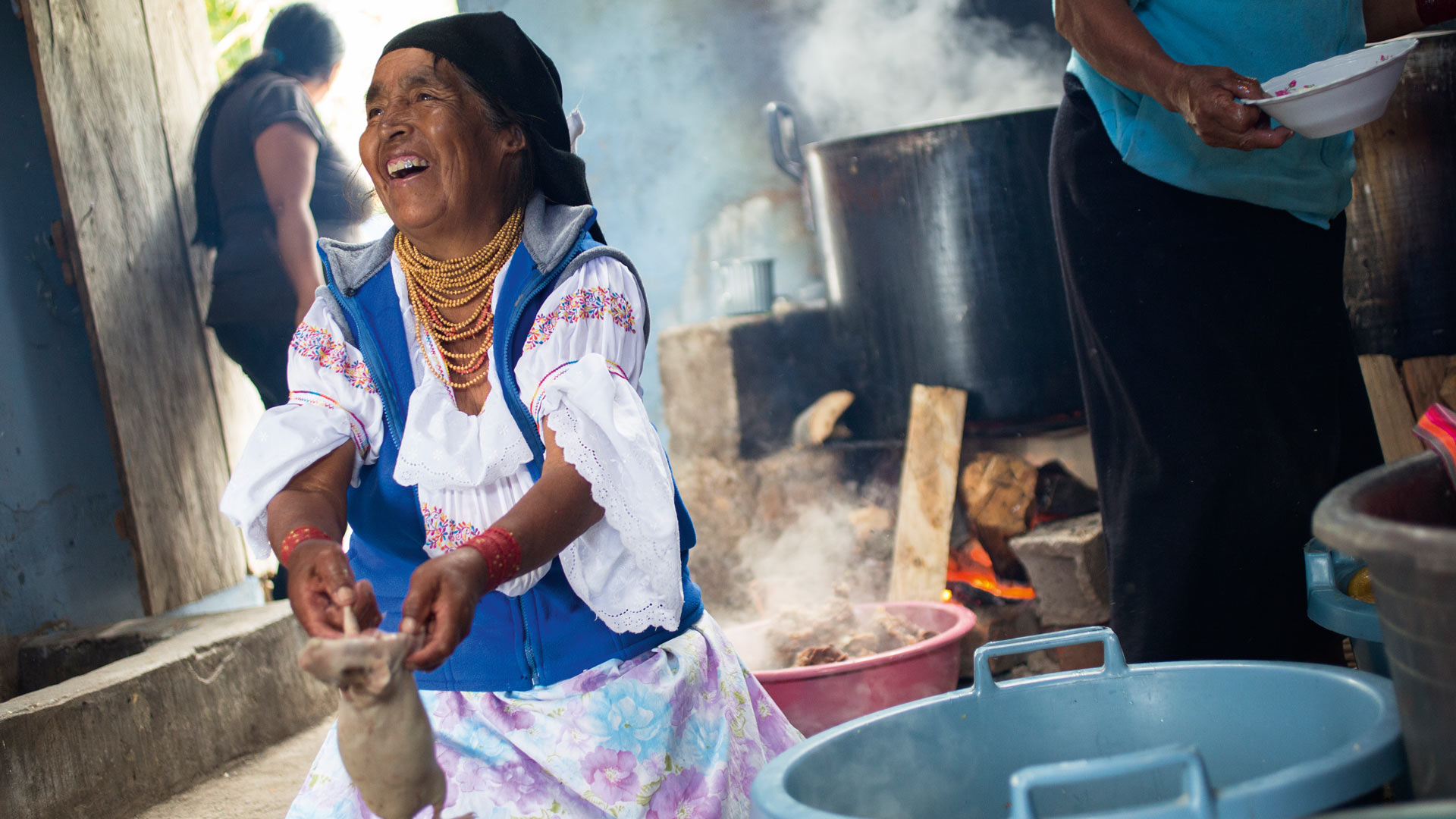 Although these obrajes ceased operations when mass production of textiles commenced in Europe, the Otavaleños continued the tradition, endowing their town, from the mid-20thcentury to the present day, with an invaluable asset. In Ecuador, such has been their success that not only do they own new cars and build big houses, they travel the world, boasting enviable business connections in the United States and Europe.

This wealth and global vision however doesn’t seem to have made a dent in Otavalo’s cultural expressions, in that essential reality they reveal both socially and culturally, and which we hope to have captured for our readers over these pages.

Just as, they say, the Inuits have many words to describe snow, Otavaleños offer a variety of ways to express solidarity within their communities, a fundamental part of their sense of oneness as a people and culture.

The minga, the most important ceremony of social reciprocity, and perhaps the highest form of community life within our country, is a central aspect of Otavaleño social structure. Entire clans take to the fields, plow together, harvest together, thrust their hands into the soil and share their products together…

In its modern structure, a community delegate or authority is in charge of calling for the minga. And the word ‘everyone’ is not taken lightly. ‘All hands’ must collaborate. It is a way of marking the cycle of life, a custom that has been repeated endlessly since time immemorial.

Community work, including building homes or cleaning sidewalks and opening up roads, tilling the land and preparing for rituals and festivals, is carried out through mingas. Each participant plays a collaborative role, in the style and fashion of their ancestors, and are repaid only with the satisfaction of having achieved their common goal.

Those who do not participate, however, may be fined. Therefore, although money is not really part of the overall concept of the minga, and the involvement of every participant could be considered as voluntary, the notion of obligation does not escape its cultural context.

Every single fold on an Otavalo woman’s attire catches one’s attention, beginning with the white blouses that reach their ankles (which are also their petticoats), adorned with colorful, embroidered motifs across the chest area, symbolizing flowers, wings, or the spirit of Mother Nature.

This contrasts with their uniform skirts or anacos, comprised of an inner white layer, and an outer black or navy blue cloth, with delicate embroidered fringes representing forests or the sea.

There are two kinds of waist belts or chumpis. The largest, (mama, or mother, chumpi) about 10 cm wide and a smaller one of 5 cm (guagua, or baby, chumpi), which could not possibly be brighter or more patterned. Sisal espadrilles (alpargatas), by contrast, are simple and black or navy blue, for women (white for men). 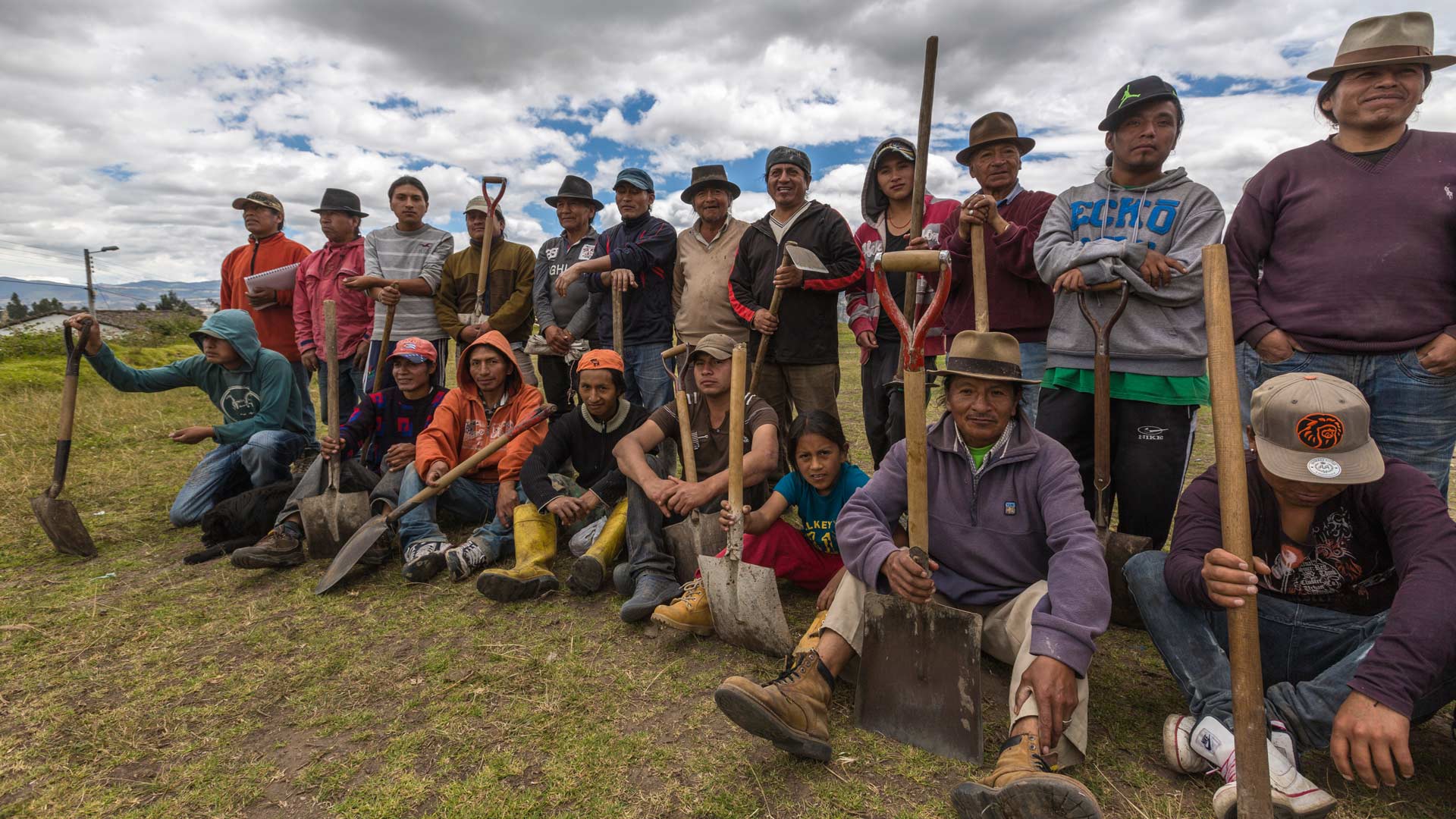 The list of accessories is long. The fachalina is a shawl wrapped around the shoulders and fastened with a pin or knot. For special occasions, this is placed over the chest.

The uma watarina, a black-and-white cloth that represents the dual nature of the spiritual world, is most elegant when worn as a turban, but during the harvest or everyday chores, it is placed flat and folded over the woman’s head, to protect her from the sun.

Gold-bead necklaces, or walkas, remind us of countless grains of corn, and represent both the importance of maize in Otavalo, as well as the importance of the woman wearing them (the greater their number and their width, the more important the woman).

Around the wrist, makiwatanas, or red coral bracelets, empower the porter and protect her from all evils. Orejeras are large, elegant earrings that reach their shoulders with a large silver coin in the middle. They also wear brass rings (one on each finger is the tradition), a ribbon around their hair, and a white felt hat. Mothers are also known to wear colorful blankets, or rebosos, which they use to carry their children on their backs.

Men’s fashion is as striking, with elegant dark ponchos, white pants, black hats and their feature braids, which hand down their backs, sometimes right to their waists.