The New Amazons: Alicia Cahuiya and the struggle of Amazonian women

Three hours on foot to leave Ñoneno, in Yasuní, a site far from any road. Three hours by canoe on the Shiripuno River, then four hours by bus and another nine hours from the Francisco de Orellana (Coca) bus terminal to reach Quito. It’s 213 km from Puyo, the capital of the province of Pastaza. This is the journey Alicia Cahuiya, the president of the Waorani Nationality of Ecuador (NAWE), has to endure to leave her jungle community.

Alicia is one of the key figures in the plight of our Ecuadorian Amazonian women to defend their rainforest and the rights of native peoples. Ecuador is the only country that recognizes these rights through its Constitution. Alicia is over 40, but she only left her community for the first time 15 years ago. In 2003, the oil exploitation of Block 43 (ITT) in the northeast corner of Yasuni National Park, within Waorani territory, was approved. Alicia was determined to make her people’s voice heard.

Alicia, or ‘Hueya’, as her closest friends call her, has four children. She grew up with her grandparents. Her name means ‘water guardian’. She feels she must honor the memory of her ancestors. The Waorani are skilled hunters and warriors in their homelands of rivers and forests, home to macaws, pink river dolphins and a million other creatures who live in the most biodiverse faunal and floral community in the world.

In the Wao culture, only men can be considered ‘warriors’. She tells us, however, that she was first married when one of the most important and complex confrontations against a powerful oil company began. Her husband, who had been a Wao community leader, imposed rules at home: she was to arrive on time if she was allowed to leave the house. As a political leader, this condition was impossible. She was forced to leave her home. She travelled with her colleagues, organized the community, she was even in charge of cooking for her team. Her husband complained, pushed back. He eventually demanded she accept the oil company’s presence in Yasuní.

One day, Alicia took her husband’s spear. The same spear with which he hunted monkeys and tapirs. Waorani do not allow women to touch the spears, since they believe it brings bad luck. But, challenging the entire social order of her community, she entered the jungle with the spear and did something even more daring: she hunted an animal. With this act, she effectively renounced her status as a housewife. “If you’re a man with a heart, if you are my partner, why don’t you help me?” she asked him. Now, armed with courage, her decision to leave was final. 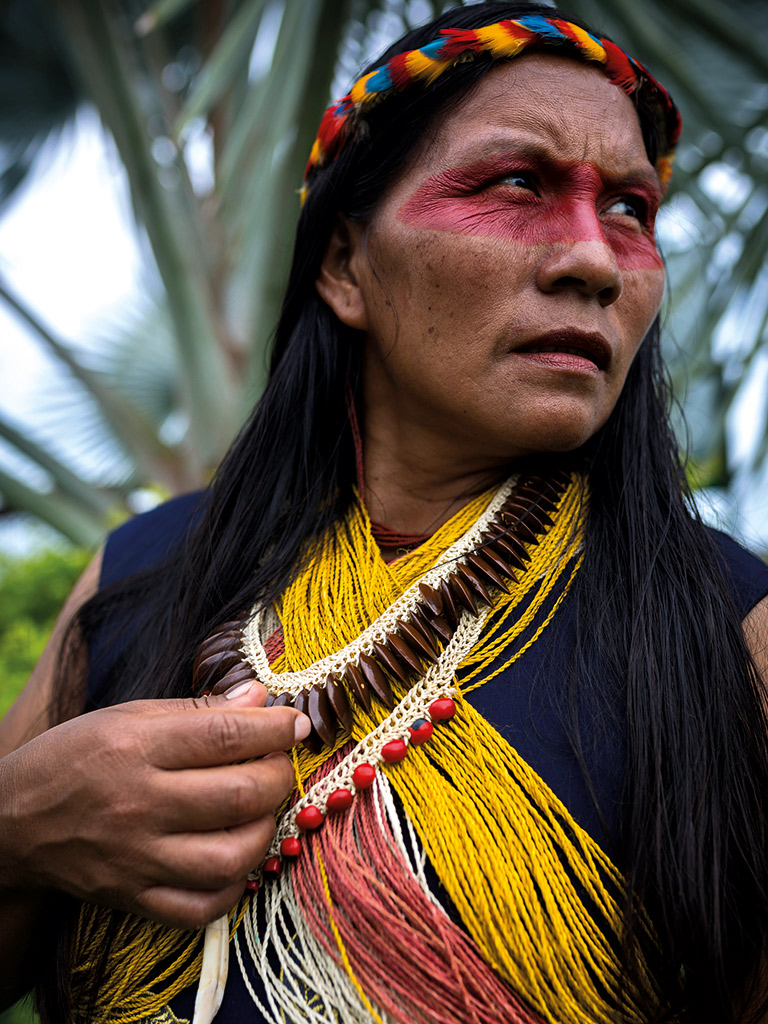 This Waorani warrior began at a young age, participating in the Organization of the Ecuadorian Amazon Huaorani Nationality (ONHAE), which brought together leaders from the Pastaza, Napo and Orellana provinces. She is the founder and president of the Waorani Women’s Association of the Ecuadorian Amazon (AMWAE), which revolutionized the Wao world, where men were used to making all the decisions. They had signed agreements with the oil companies for the exploitation of their land while the women were relegated to domestic care. The men earned the money but there was no clothing or food for the children and all was spent on liquor.

Alicia contrasts the outside world and the Waorani world: in the jungle you don’t need dollars, but hard work to take care of the land. “This jungle is important for our children. If it were all about dollars, my children wouldn’t know the jungle.” This is the essence of her conviction as a mother and a politician. This was what she said before of the plenary session at the National Assembly in 2013, when she denounced forty years of oil exploitation and the health effects this exploitation had on the local population, the contamination of the water and the land. “Four million barrels of mud and 40,000 barrels of other highly-toxic chemicals are dumped into our ecosystem, without prior treatment”, she claimed. The rivers and creeks that provide water to communities like Pacayacu are filled with toxic wastes that exceed tolerable pollution levels by 10,000 times, according to government reports.

When the government’s initiative to seek international funding to match the incomes the nation would have received from oil exploitation finally failed in 2013, Alicia came under huge pressure to support the exploitation of reserves within Yasuni National Park, which then increased, contradicting the laws in force that protect the biosphere reserve as well as the people who inhabit it.

Alicia’s story is the struggle of so many Amazonian women. Patricia Gualinga (Kichwa Sarayaku), Salomé Aranda (Kichwa), Nema Grefa and Gloria Ushigua (Sapara), Catalina Chumbi, among others, have marched at various times. They have made the same political pilgrimages as Alicia to make her people’s voices heard. In March 2018, a group arrived from Puyo to the Presidential Palace to request 22 points be met. They were not even received by Ecuador’s president. Their defence of our rainforests is treated with disdain by our macho world.

But there are victories: in July 2019, the Waorani won a legal ruling against oil exploitation in their 180,000-hectare territory. Waorani women were the chief protagonists in this courtroom drama, protecting their forest world for their children and safeguarding the memory of their ancestors. They claimed that the referendum that took place in 2012, which asked the people whether they agreed to the exploitation of their lands, was fraudulent and exploitative. That legal setback did not silence them. On the contrary. The new ruling was the result of this generation of Amazonian warriors’ willpower. With spears and painted faces, and with their ‘power’ spirits to accompany them, they were able, and will continue, to defend what others couldn’t in the past.

The AMWAE is currently the organization with the greatest presence on the local and international political scene. Employing women in cocoa and handicraft production with vegetable fibers, in 2014, they were awarded the Equator Prize for their project “Chocolate for conservation”, and in 2015, they received the Latin America Green Award in the category “Biodiversity and Forests” for their fair trade, sustainable practices, craft processes and organic production.
Share
Facebook
Twitter
Pinterest
WhatsApp
Previous articleFatima’s Captain Caveman
Next articleHola Vida’s hidden faces