The long road to El Cisne

Steep slopes tumble down from the roadside. They seem to seek the center of the Earth only to rise again on the other side of a valley, rippling and ridged, overwhelmed by their own forms, immense hulks that carve the landscape. We advance on what seems to be a unique species of dusty snake. The peoples born by these roadsides are like solitary sighs that nobody listens to. A less poetic concern: are we the only ones here?

Under layers of dry earth that swirl at the slightest breeze, the solitude of this landscape continues, infused by the tramping footsteps of thousands of devotees, whose faithful legs carry them every year to El Cisne and its Virgin, the most famous in this part of the world. The town of El Cisne, where the religious icon rests most of the year, stands as a beacon amid this sea of mountains, the closest thing to a final destination on this adventure.

Leaving Loja, before reaching Catamayo, we take the road that forks north towards El Cisne, via Taquil. At first, the road deceives us with its asphalt and width. But soon enough, it reveals its true nature: never-ending twists and turns, forgotten hamlets, rock faces, hills and more hills… It’s not advisable to look for too long down the road-side ravines. Instead, we look straight ahead, as the landscapes transform before our eyes with the grace of a medieval painting. 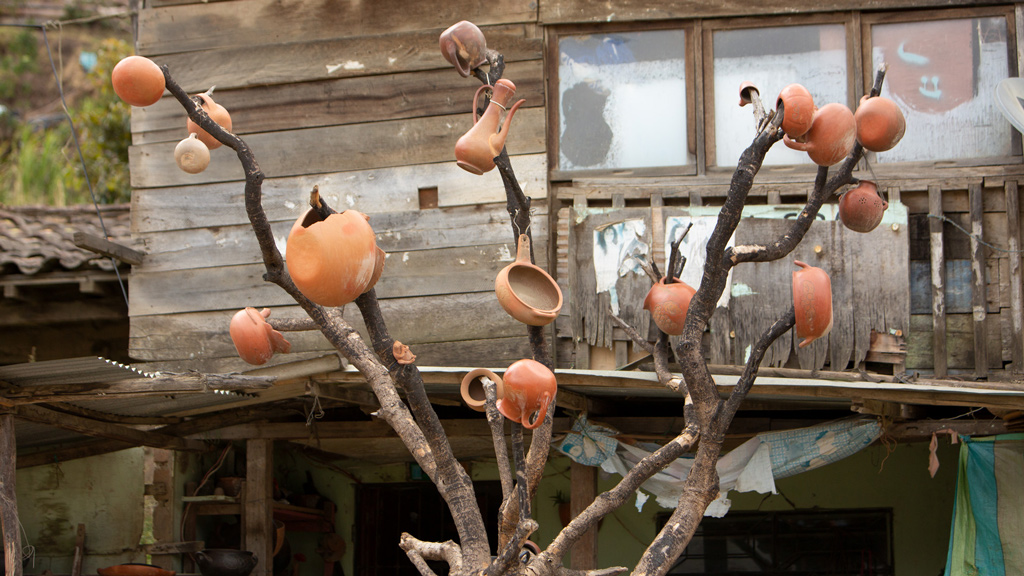 Pottery for leaves in cera.

Large clay pots curiously hanging from various trees with long, leafless branches, catch our eye. These are the guerrilla marketing ploys of the potters of Cera. One of the most imposing trees marks the fork for road to Santiago, which one can take if looking for a (bumpy) shortcut northeast to Saraguro. It seems a great location to stop and observe the local potters at work. But there are others on the way and in town.

As we advance, deep in farm country, we reach Taquil, a sleepy town that has been experiencing novelties, including a brand new drinking water system and a new soccer-basketball court where goals and baskets are blessed by the imposing yellow church that rises behind.The entire area is part of the experiences one enjoys by staying at Hacienda Gonzabal, a delightful mountain inn whose detour left challenges you to do what you have feared up to this point: nose-dive down the ravine… but the reward is special. 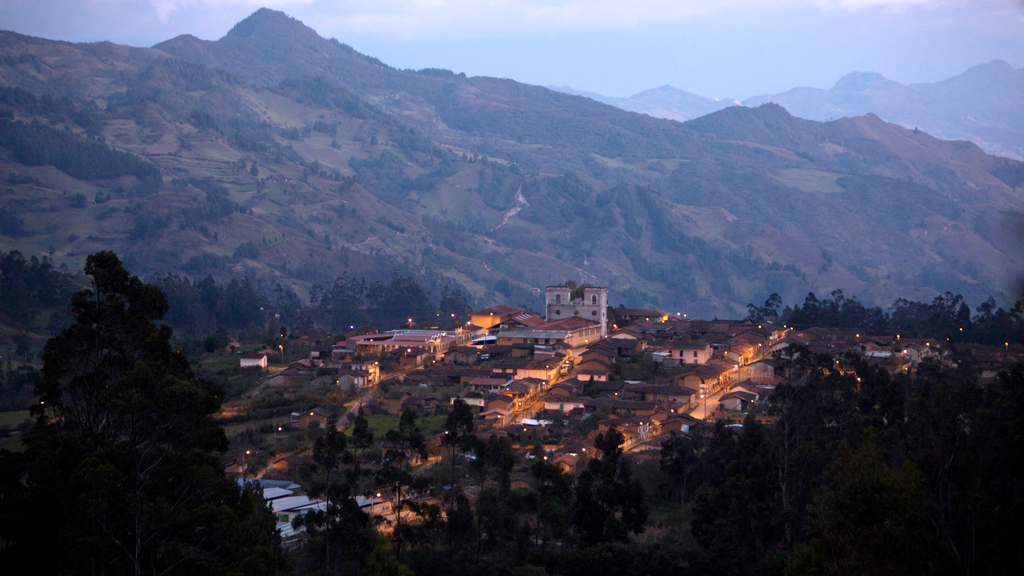 We visited a neighborhood in the tiny neighborhood of Cachipamba, where María Luzmila Pillajo makes up to forty ceramic pieces a day and one can witness her transform shapeless mounds of earth in minutes, measuring by eye what she needs to create: a bowl, a vase, a pitcher… She has also incorporated black ceramic pieces, a technique which requires rubbing them with sawdust as they emerge from the hot oven.

Just north lies Chantaco, a quiet, mysterious town, striking from the moment you arrive, with two impressive and imposing metal gateways (one to enter and a second to exit). Pretty tiled-roof houses and a beautiful central square make it a photogenic and peaceful sight, a place that invites you to at least have a wander around with an ice-cream in hand.

As we progress along the road, the architecture of the houses changes. Bit by bit, concrete breeze blocks are replaced by adobe mud. The style grows more prevalent until it reaches what seems to be its source, Chuquiribamba, where almost all the houses reveal at least one wall of unpainted solid earth. If it weren’t for the painted façades, the place would be a realm of clay. The ability to preserve this traditional architecture was undoubtedly one of the reasons it was declared a Cultural Heritage Site of Ecuador in 2013. 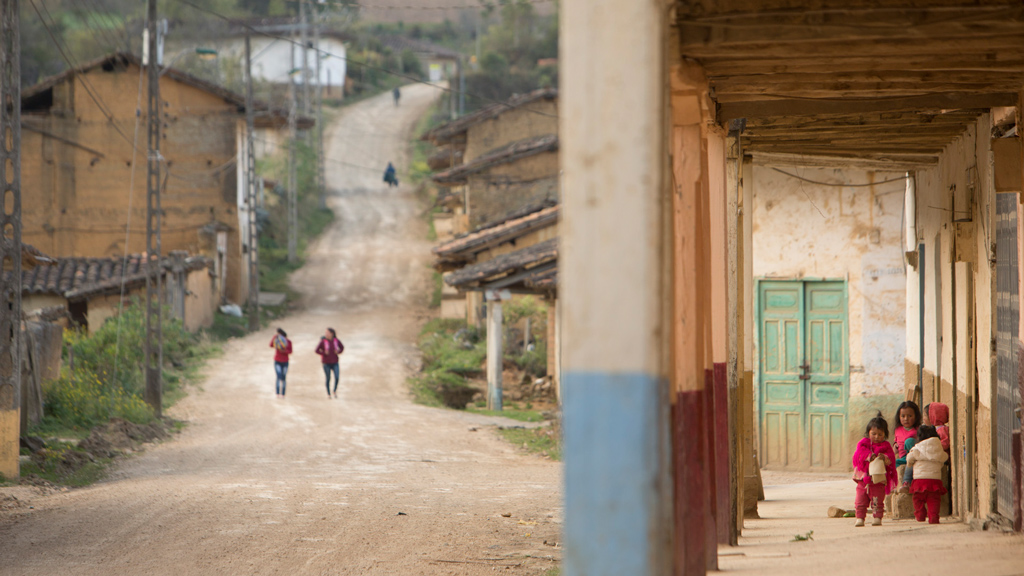 But the Chuquiribamba residents take pride in many things: their guinea pigs, their pitchers of sambo pumpkins and sugar cane, their musicians, their chemical-free agriculture and their horchata (the “Lojana” brand has its factory in the highland neighborhoods and produces this local aromatic tea with over twenty-five ingredients). We discovered keke sweet rolls, and puntas (alcohol) with agüita (horchata water), a shot you can ask don Guill for at his store (ask around, he’s a charismatic character, indeed).

From certain angles, in the upper reaches of Chuquiribamba, one can glimpse the main attraction of El Cisne: its spectacular basilica and Campo Mariano (Marian Field). We are getting closer. But first we must pass by the humble town of Gualel, with its long, prominent church, new marketplace with beautiful painted doors and village streets of dirt and old houses and family orchards… 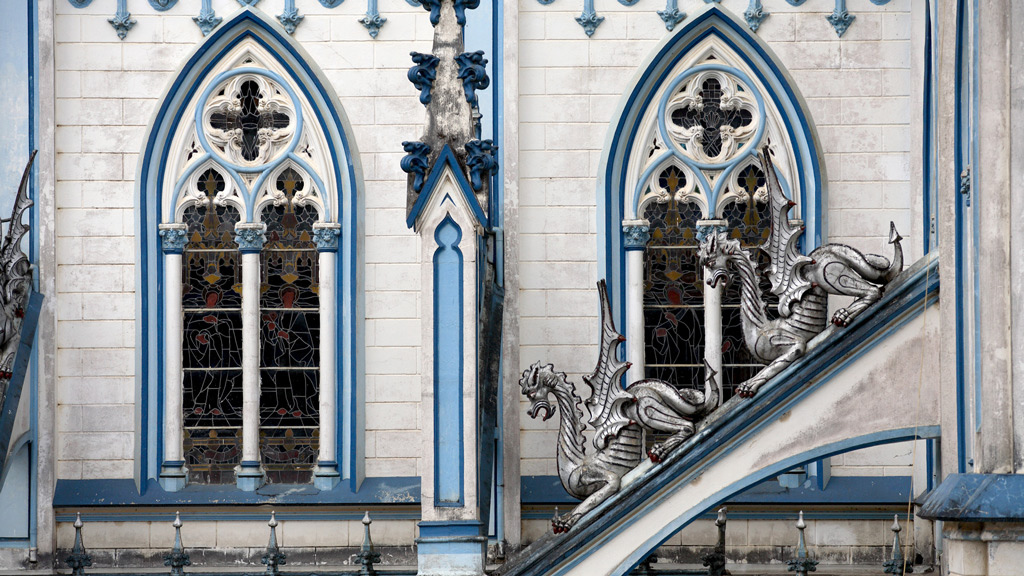 El Cisne finally appears as the most important town of the route; this, of course, thanks to the massive religious constructions, painted light blue and white, in honor of the spiritual devotion they invoke. Depending on what angle you look at the adjoining structures, they seem, on the one hand, curved and feminine and, on the other, square and stately. Here sleeps the Virgin of El Cisne, the cherished “Churonita” (the name locals have bequeathed to her, due to her curly hair). If you have time, visit the museum and clock tower or continue your “religious route” a short distance south, via San Pedro de La Bendita, to “Agua del Milagro”, another over-the-top construction of stepped walls and balconies, where the faithful come to witness (and buy) the miraculous water that famously helped a thirsty pilgrim back in the 1800s. Only meters away from completing the pilgrimage to El Cisne, the man was overcome by thirst and fatigue and upon invoking the Virgin, She produced a natural source at this site, one that, to this day, continues to spout water. It is not just any miracle: the event has since been recognized by the Catholic Church.

Our route finally takes us back to Catamayo, the Valley of the Eternal Sun, with cane fields that extend as far as the eye can see, the landscape turns a fabulous light green tone. “El Ruiseñor” is a cock-fighting colosseum, a meeting place for local residents and curious visitors alike, and the Monterrey sugar mill is a symbol of the region’s commercial growth, a pleasant visit. This being the land of sugar cane, you can’t leave without trying the wind roscas with sugar. And there is one more adventure: in San José, travel northwest to the mysterious Devil’s Cave, where you can walk among huge boulders; it is said many come to sell their souls in exchange for gold.

If you’re hungry, there’s nothing like cecina (cured pork) prepared just in front of the bus terminal at Catamayo — there are many eateries — with yucca and pickled onion.
Share
Facebook
Twitter
Pinterest
WhatsApp
Previous article
Loja by foot
Next article
La Churona, Virgen de El Cisne