The Genius of Invention

One of the most special experiences of enjoying food in Ecuador is to discover a completely unique cuisine, the result of an unprecedented blending of cultures that stretches back to before the arrival of the Spanish and continues today. Experiencing this legacy of invention is perhaps the first reason to be passionate about our cuisine… but it is by no means the only reason… 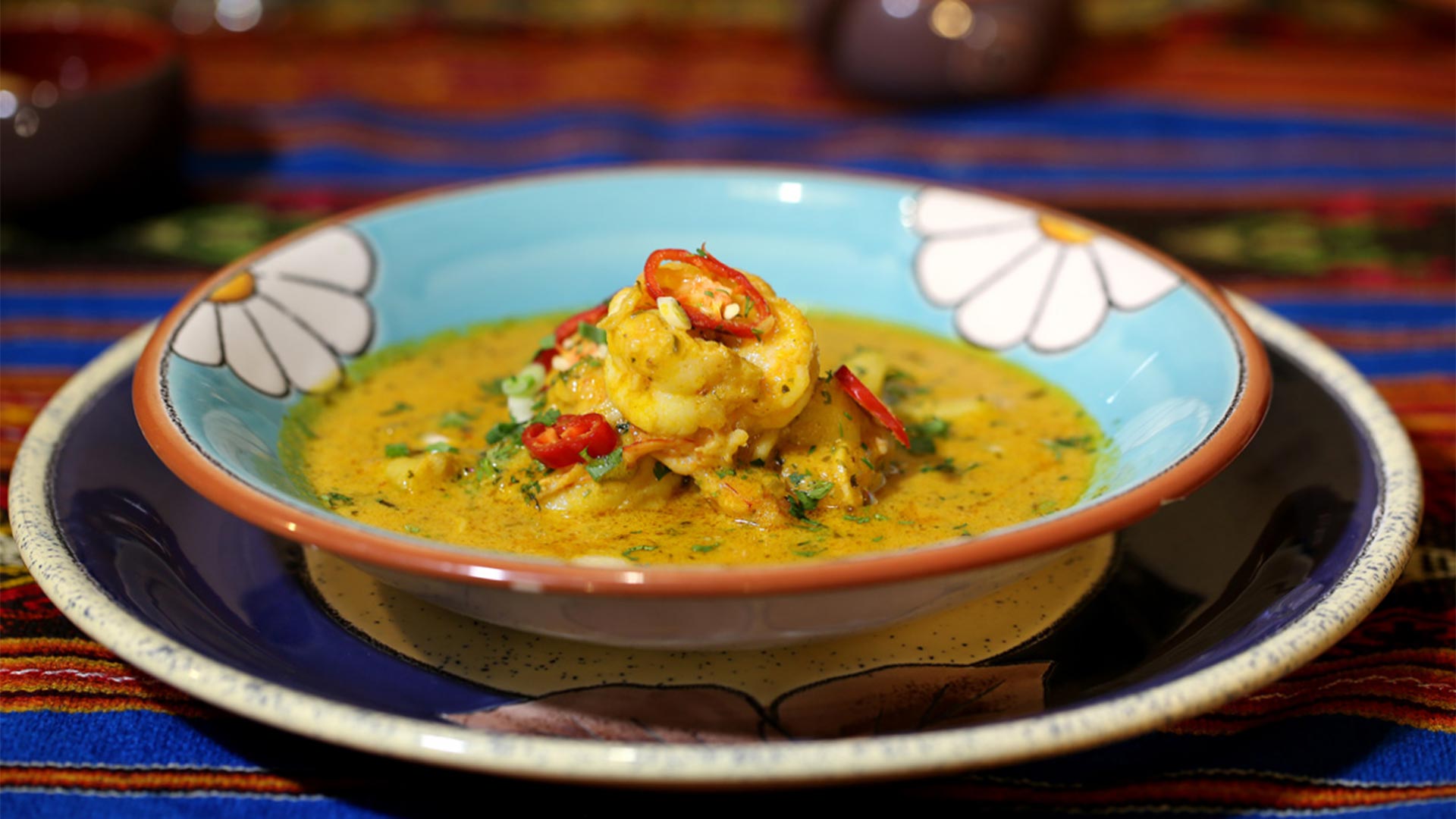 You can still find some of the remains today. You wouldn’t even have to be an archaeologist to do so. They are laid out on the beach. In Estero de Plátano’s seaside cemetery, every day the tide breaks off pieces of ancestral artefacts from the earth. When constructors excavate to widen a road, they also pop up. They are, indeed, an example of the great aesthetics of our ancient cultures. But they are also the fossils of a spectacular culinary invention.

The seafood viche, like all Ecuadorian food, is the conversation of thousands of cooks over hundreds of years, a dish that mixes fresh seafood, pumpkin, corn, grains, Manaba beans – grown since human beings harvested vegetables from these lands – peanuts… and, very importantly, small balls of green plantain deliciously smothered in garlic and achiote.

The seafood cazuela, on the other hand, is also a thick peanut sauce that curdles in the oven, and to this day is still cooked in that original clay pot. The plantain is softened tirelessly until it can dissolve in water (today, we save hours of work with a blender), which is then boiled adding water and boiled until, again, the consistency is “right”. Like al dente risotto for the Italian maestro, the consistency of the cazuela is a matter of distinguishing the delicate contours of perfection.

No one shares with us anything remotely similar to these recipes. They are a reflection, like so many, of our historical culinary inventiveness.

Did you know that to make the popular seco, you have to, before even chopping the onion, make a ‘reduction’ of green pepper in liters of water? You boil the liquefied green pepper until the essence of the vegetable is concentrated, a long affair for sure, and then, imagine the invention, you add naranjilla (an endemic fruit from northern South America, which only is really put to culinary use in Ecuador), ground red pepper and beer. Some say the seco, which means “dry” in Spanish, would inevitably follow the wet dish, i.e. the soup dish. Others argue that the term was made popular in Ancón, a small fishing village with a well- known colony of British workers, who would ask for the “second”, which was corrupted into the Spanish “seco”. In any case, that doesn’t explain why something generic, synonymous with “entrée”, could have such a specific recipe. It is also served, indistinctly, with avocado, sweet plantain and yellow rice (cooked in achiote, or annatto). Could it have been the invention of one cook in particular that, to put it in twenty-first century lingo, went viral? 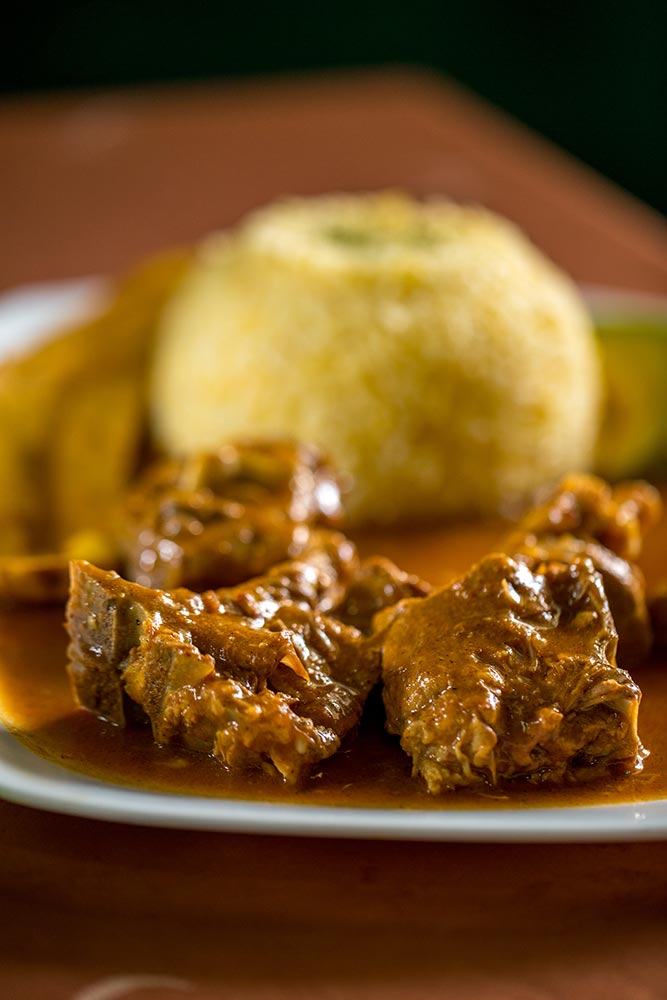 In the Andes, the ají de carne (which has nothing to do with meat chili) is equally astonishing, with a base of sweet plantain cooked in achiote, onion, potatoes and peanuts. It is a recipe that, while facing extinction, is also one of the country’s most surprising: so many flavors collide in a single spoon! The Andes is also home to locros (served with cheese and avocado), the colada morada and the fanesca, recipes very much alive today, which, as we have discussed in Ñan, are very difficult to trace and pinpoint historically.

In general, these are elaborate recipes that require investments in time and effort that our times would seem to preclude. The cooks who arrive at the local markets can cook an hornado for ten hours. To make allullas in Latacunga, bakery owners begin their dough- making at three in the morning. The fanesca takes several days: an entire day just to prepare the beans, the first step of the recipe. Figs in syrup with cheese (a classic Quito-Andes dessert)? Two days just to soak the fruits (one day raw, another day boiled in water).

Invention here is not synonymous with experimentation, fusion or the avant-garde.

The inventiveness in our country is more about the result than the process. Our culinary culture has reached such maturity that inventing is, in fact, quite simple. The bases are well set. A miner in Zaruma can crumble a bolón, mix in eggs and cheese, and so the tigrillo is born, one of the favorite dishes of Guayaquileños, miles to the north – and the reason why the city’s very popular Café de Tere fills its two locales to bursting every weekend.

This is also the case of the Jipijapa ceviche. Everyone thinks of it as a variation that this village has been preparing for centuries, but that truly was only born less than twenty years ago, when a family did the obvious in any peanut-loving land (in Manabí, all dishes come with a one-and-only peanut-and- dry-corn salt called salprieta)… In fact, it’s surprising that no one came up with the idea before… in the history of Manabí, the only dish without peanuts was one of its most emblematic recipes: the ceviche.

Today, even signature chefs make their Jipijapa version, with their more-or-less refined peanut sauce. All of which tells us that inspiration really comes from the people, from the grassroots, just like the street vendor who came up with the cevichocho (a ceviche that replaces the seafood with chochos (lupins) and has become an Andean classic), or the Amazonian, delicious heart-of-palm ceviche, which has now become so representative of the region…

Yes, no matter how talented the ‘author’, how slow the food, how hip the craft beer… Ecuador is still is tied to its traditions, and tradition is its highest form of ingenuity. The fame or reach of each dish depends, of course, on the market, on the diners. All Ecuadorians are inveterate judges and juries: they accept and assimilate new dishes they love, and before you can say “¿y la yapa?” they’ve stirred their favorites into the great bubbling pot of the country’s historic cuisine, forever the domain of common, collective creativity.