For anyone of my generation, the reminiscence with Star Wars’ Darth Vader is inevitable. Not only are the black tunics  foreboding, the pace with which the ritual  clergy advances through the Cathedral,  the spectacularly long black capes they  drag behind them, the ominous music, the  moment in which participants drop onto  the floor, dressed all in black, looking like  body bags… it surely gives one the chills,  the entire ceremony transporting us to a  land far, far away.

Arrastre de Caudas is intended as a ‘closedcircuit’ ritual of the high clergy that only became known to the public once municipal authorities found out Quito was one of the last places in the world that celebrated it. Today, in an effort to make people aware of its heritage value, Quito is probably the only city in the world in which the ceremony is promoted with fanfare (it is even projected onto outdoor LCD screens for those who couldn’t make it into the Cathedral to watch). In the few years since it was first made public, onlookers have even created superstitions around the enormous flag the archbishop waves during the climax of the ceremony, intended, incidentally, to touch participants, but which many avoid out of fear that death will come to the person it touches.  Some even duck as the flag waves before them, while clergy members sit up even straighter, proudly receiving the ‘spirit of the Lord’ upon the flag’s caress. 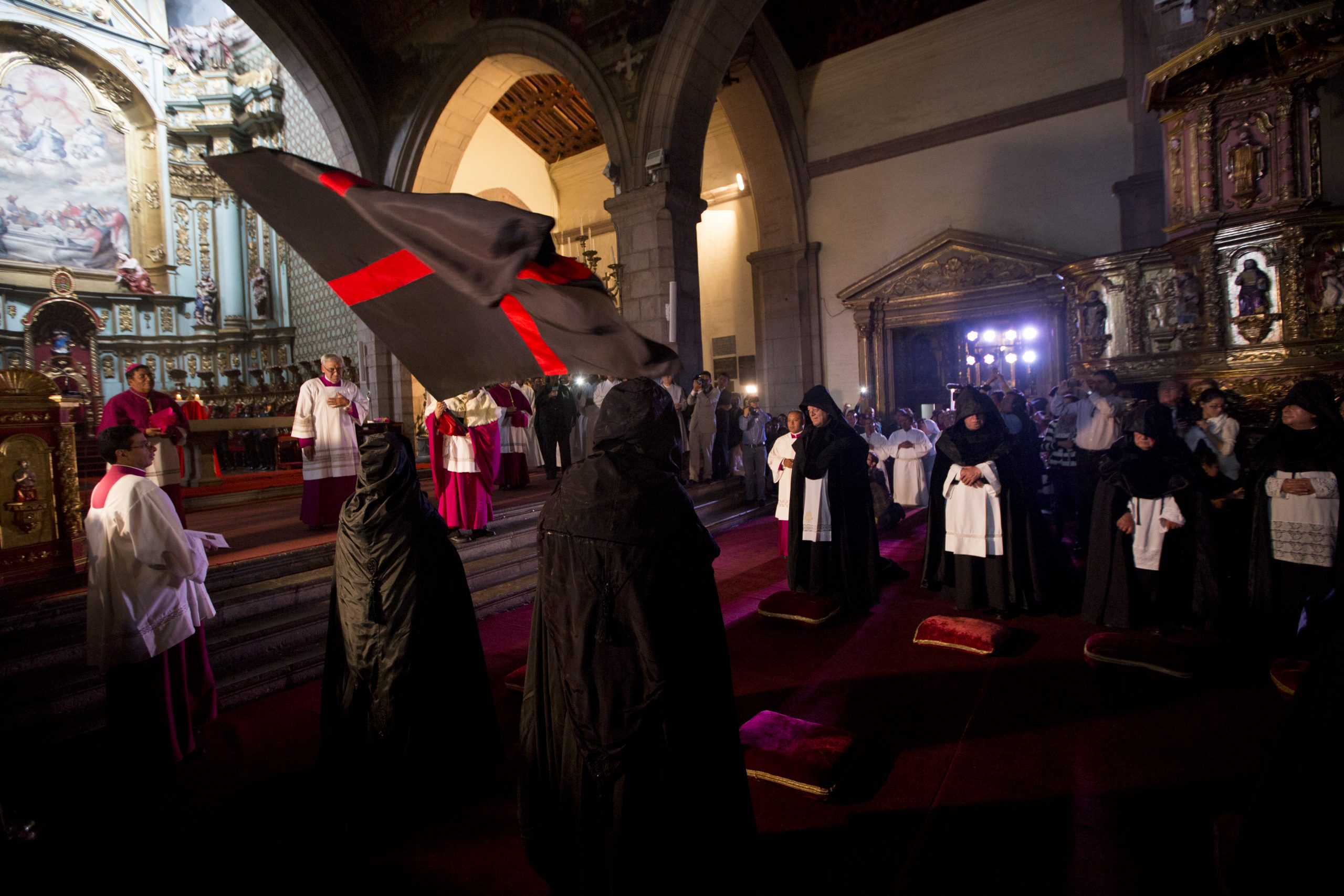 This mournful, funerary ceremony has been honored in Quito since the XVI century. Lima and Seville, the only other cities that continue to celebrate it, are slowly letting the tradition slip into oblivion. But here, Caudas has never been stronger. Predating Christianity as a Roman ceremony honoring a fallen general, the Catholic Church adopted the ritual’s solemnity as a way of paying homage to its very own ‘fallen general’, Jesus Christ; offering his strength and courage to his ‘army’ on Earth.

At midday, inside the Metropolitan Cathedral, and presided by the Archbishop of Quito (who plays a pivotal role in the entire ceremony, accompanied by his clergy and seminary), funerary organ music accompanies the march of participants to the altar. The seminaries carry lighted candles; the canons, covered from head to toe in their exaggeratedly long black cloaks; and the deacon entrusted with the ‘Lignum Crucis’ – a jealously guarded cross made from precious stones and gold, and encrusted with fragments from the real cross of Christ – move ever so gravely.

The canons, elders of the church – whose average age is 80 – kneel on red velvet cushions at the foot of the altar, whilst the deacon takes the ancient relic of the Lignum Crucis to the pulpit to exhibit, before placing it on the altar. Meanwhile, the archbishop, in a colorful gold-purplesand- white garb, accompanied by his bishops, recites the prayers of the ‘solemnes visperas’, followed by the psalms and hymns. 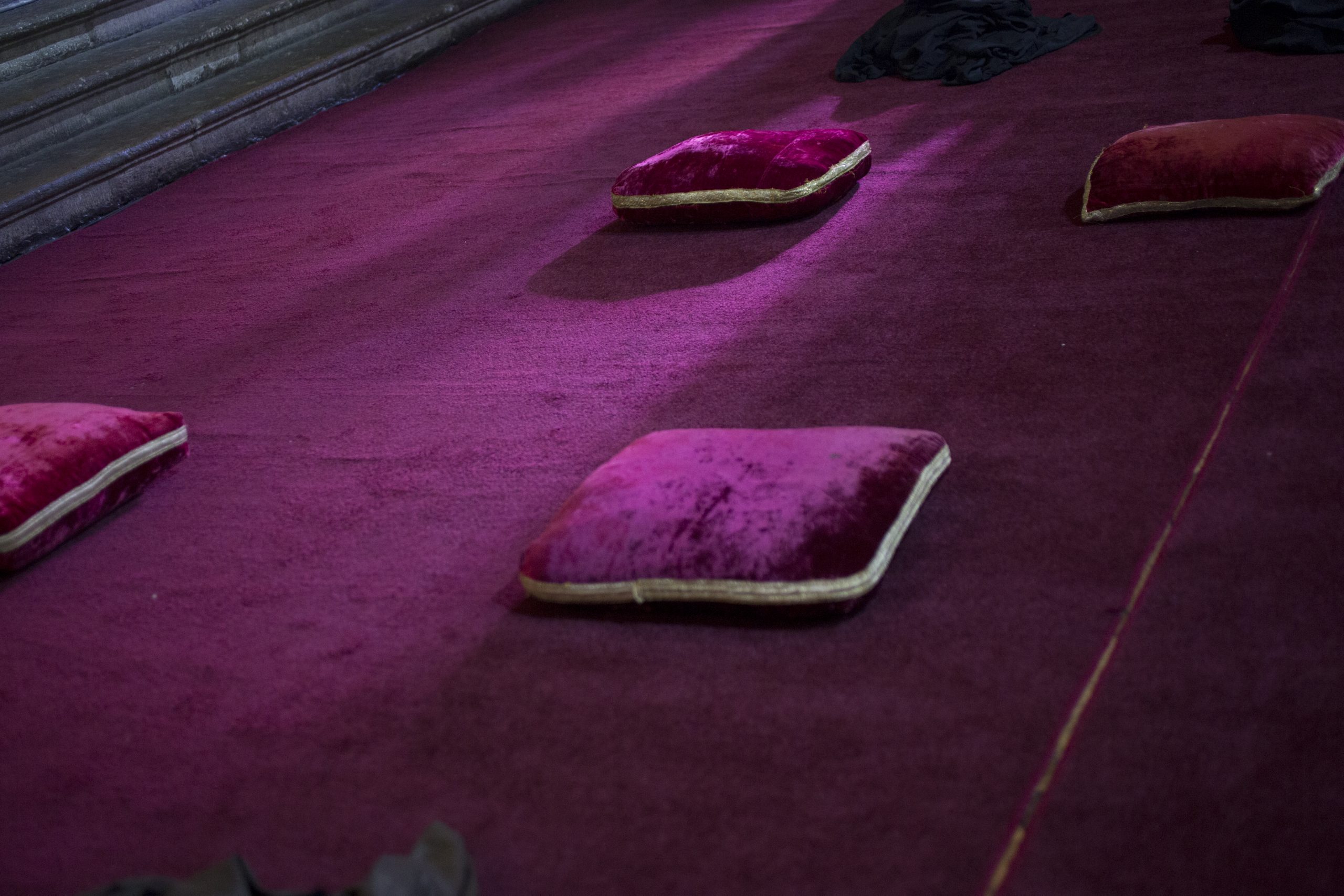 After this initial ceremony, the funeral procession takes place. The canons and their entourages, two of whom carry the candles and one of whom cares for the tail of the cloak, walk from the choir around the wings of the Cathedral, allowing the large cloaks to drag along the floor, symbolically sweeping up the sins of humanity. Following closely behind, a member of the order carries on his shoulders the flag of resurrection, a large black piece of cloth marked with a red cross (the black representing the mourning of a humanity left in darkness and the red, martyrdom and the blood of Christ).

Once the procession arrives back at the altar, the canons lay prostrate on the ground as Jesus lay dead and the archbishop waves the flag over their bodies and over the heads of the congregation, in homage to the fallen general, symbolically transporting his spirit to the other soldiers, and in this case, Jesus’ greatness to the entire congregation. As the ceremony draws to an end the archbishop bangs the flag pole three times on the ground, each bang representing one of the days of Christ’s entombment. The canons, in their heavy black cloaks, rise just as Christ rose on the third day.  A blessing given with the relic of the real cross of Christ, the Lignum Crucis, brings the ceremony to an end.