As soon as we reach the community of Lisan Wasi, we are informed that our tourist visit has been canceled. However, they invite us to stay and be a part of their “San Pedro”, a village festivity that is not dedicated to the Christian apostle—like in many an Ecuadorian town—but to Pedro Vargas, grandfather of Leonardo “Leo Dan” Vargas Watotuka, the festivity’s organizer, who leads us to the heart of the celebration with drums, dance and chicha…

…it’s like an ancient ring, the community sitting on all four sides and everyone observes centerstage: whoever enters must make his round and greet everyone. Women and girls offer chicha to those present. In the middle, drums are playing, everybody engulfed by the same beat: those who spent the day in the jungle bringing the holiday meat; those who won battles in that jungle, warriors who wear modest feather crowns, snake skins, feline skins, who speak of the fight of man against beast; this time man was spared. That skin is a trophy in these festive ceremonies and also in times of war, moments of defending Mother Earth, sacred water, dignity.

We meet Marco Santi. Wearing his personal jungle trophies, he tells us: “we come from ancient, nomadic villages, from imprescriptible and indivisible territories. The sound of the drum represents the sound of thunder that breaks the jungle. The roar of the puma when it frightens an enemy. Women offer chicha to give us strength so taht we can face the jungle’s mysteries. Our ancestors were here thousands of years ago; they confronted the the Conquest and here we are, facing the threats of development.” 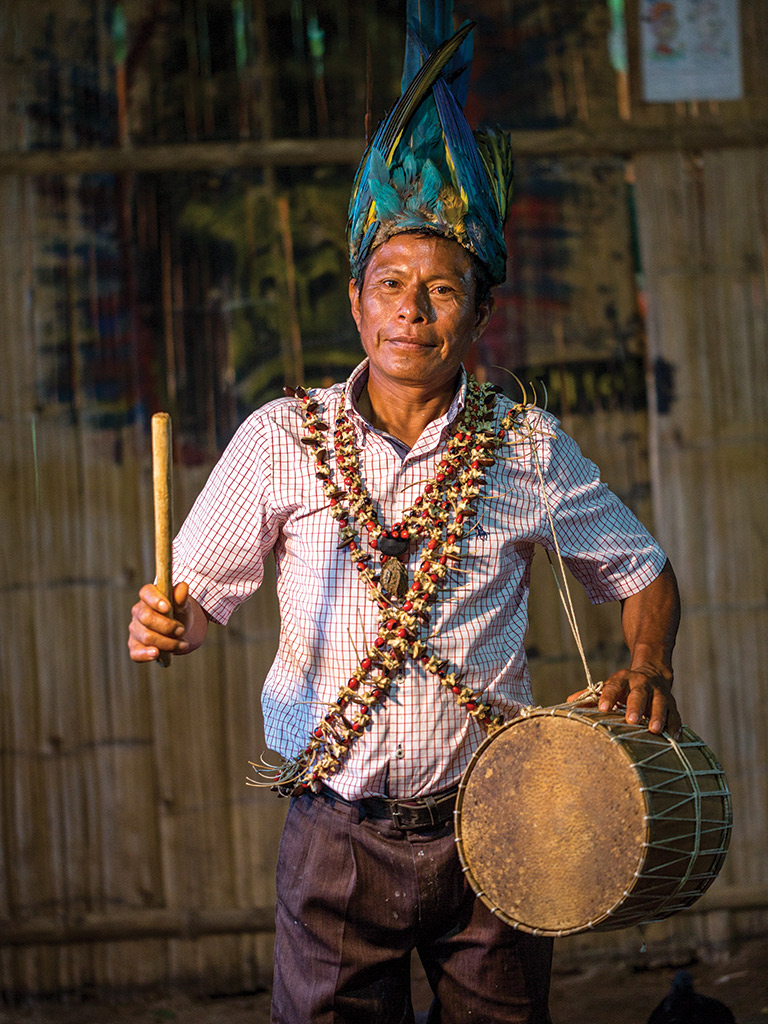 Enrique Vargas and his drum in Lisan Wasi.

“We don’t drink chicha to get drunk. We don’t take ayahuasca or huanto just because. We use these powerful plants to reach new frequencies that help us become one with Earth and find the root of our evils and our sorrows. We see ayahuasca as a wise grandmother who helps us find the way. We see, in other plants, healing.”

“The drums mean the wilderness of nature that scares away the evil spirits that surround us,” this says Marco Santi, who soon returns to the center of the construction playing his drum. It leaves us with a thought: How can we ever make the rest of the planet understand that oil and minerals should be left underground? How do we make understand that without nature there is no water, there is no life, there is nothing?

…at the farmost corner, the presence of an older blond man attracts our attention: his familiarity with the ritual, the way he is given and receives the chicha, the way he dances. He is skinny, European, tall, looks like a rock star long-lost in the jungle. Lukas arrived 30 years ago, fell in love with this ‘other’ way of life in community, respecting the land. He fell in love with his woman, he fell in love with his jungle. Today he has 11 children and proudly sees Ñusta, his granddaughter, dancing.

Like everyone else, Lukas also exhibits his trophy: a shirt from the first Led Zepellin concert. In 1968, in a gymnasium of a Copenhagen suburb, he reveals to us his role in that story. He was the sound technician that night, when Robert Plant and his band electrified the world. Here, Led Zepellin does not mean much, but Lukas proudly wears his badge of honor. 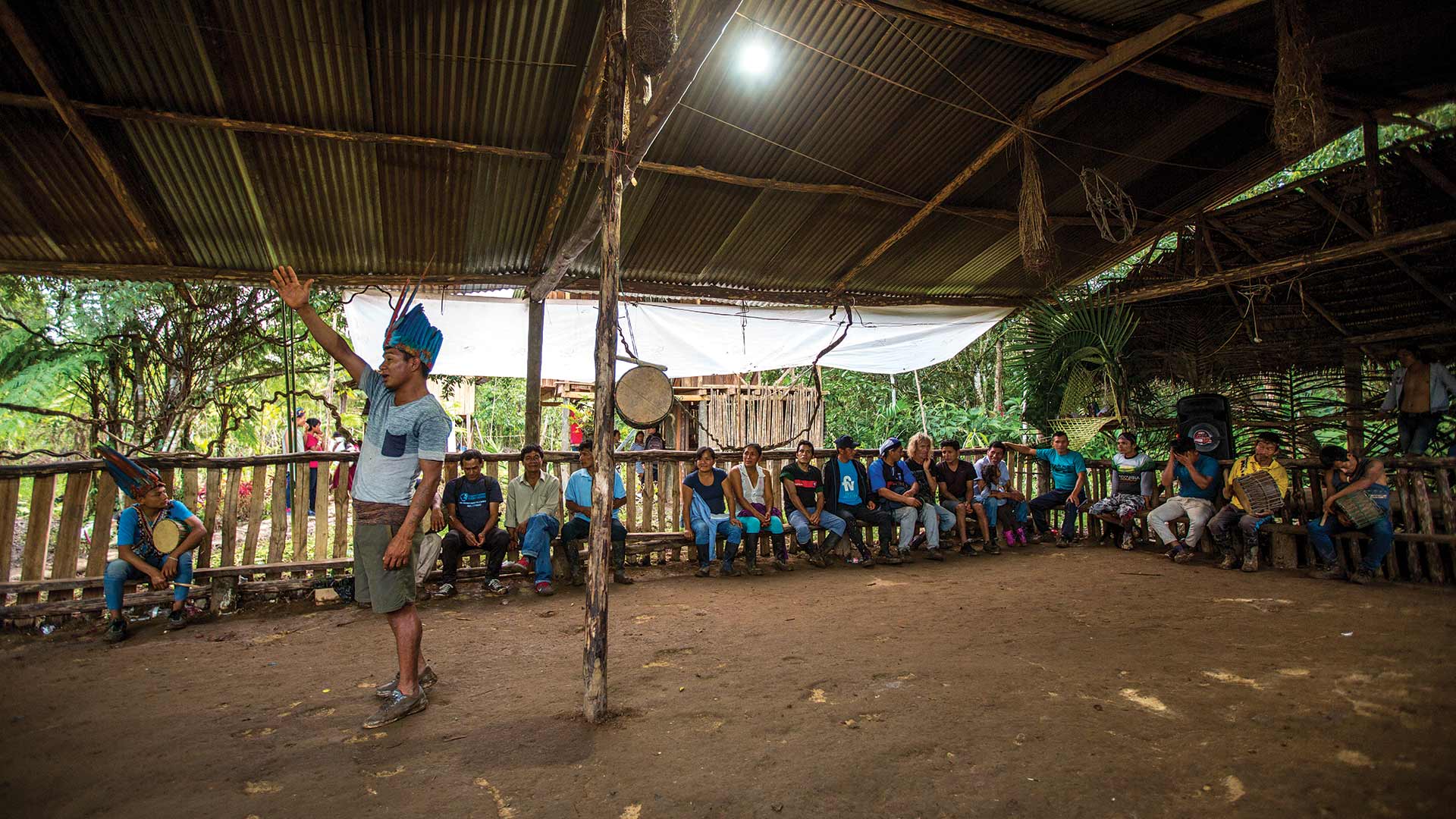 Leo Dan, on the other hand, takes us to another festivity organizer’s house, playing the drums as we walk along the paths, decorated with flowers. The cycle continues, bringing to life the age-old kichwa tradition of preparing, once a year, this unique three-day San Pedro.

On the first day, the men of the jungle hunt bush meat that Mother Earth has offered them. In the afternoon, they begin drinking chicha and dance. On the second day, known as sisa, they dedicate it to pick flowers and decorate the homes of the party organizers and the paths that lead to their homes. On camari, the third day, everyone eats the meat that is being smoked for the three days, a last supper of sorts accompanied, of course, by chicha.

As we leave, the drums, the jungle screams, the chicha songs, they resonate through the forest, surely a similar sound to that which the explorers and conquerors heard before exchanging the jaguar for their saints, the mountain for their new ideas of ​​progress, the land for a few dollars. But here, everyone remains convinced of their culture, their nature, their chicha. 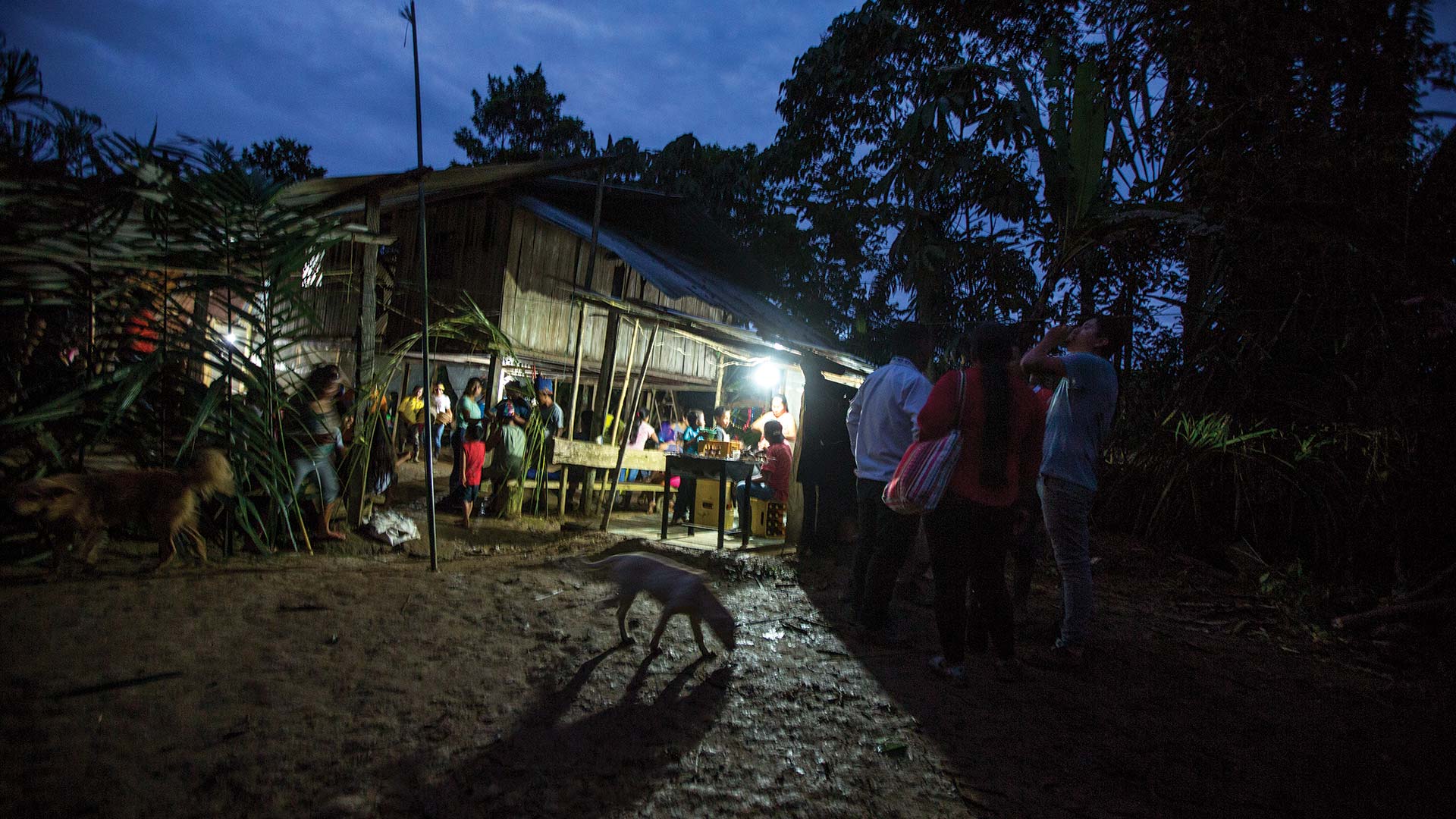 Three days of celebration, to the beat of a drum, dance and chicha.