Visiting Archidona requires an open mind, one that seeks experience beyond logic. There are no stories here, only legends. And those who tell them are inspired by spirits and ‘ancestors’. For those venturing here, challenging one’s mindset is a must.

The upper valley of the Misahuallí River was once an important center of resistance for the indigenous dwellers of the Amazon Basin. Led by the Quijos people, legend has it that clashes against Spanish settlers in the mid-16th century lasted for dozens of years. Jumandi, according to some versions, was the great cacique of this war, who sought an alliance with leaders from the Andes to destroy the kingdom of Quito.

The Quijos’ uprising failed. The inhabitants preferred to die than abandon their lands. It was not until the arrival of the Jesuits that the area was recolonized. Religious missions made their way into jungle communities to evangelize them.

Contrary to what history books may tell you, this is not the beginning of the story, but the end. We enter in search of the remains that bear testimony of their past, not on paper, but in the sacred valley of Cotundo in the form of petroglyphs, our first stop. 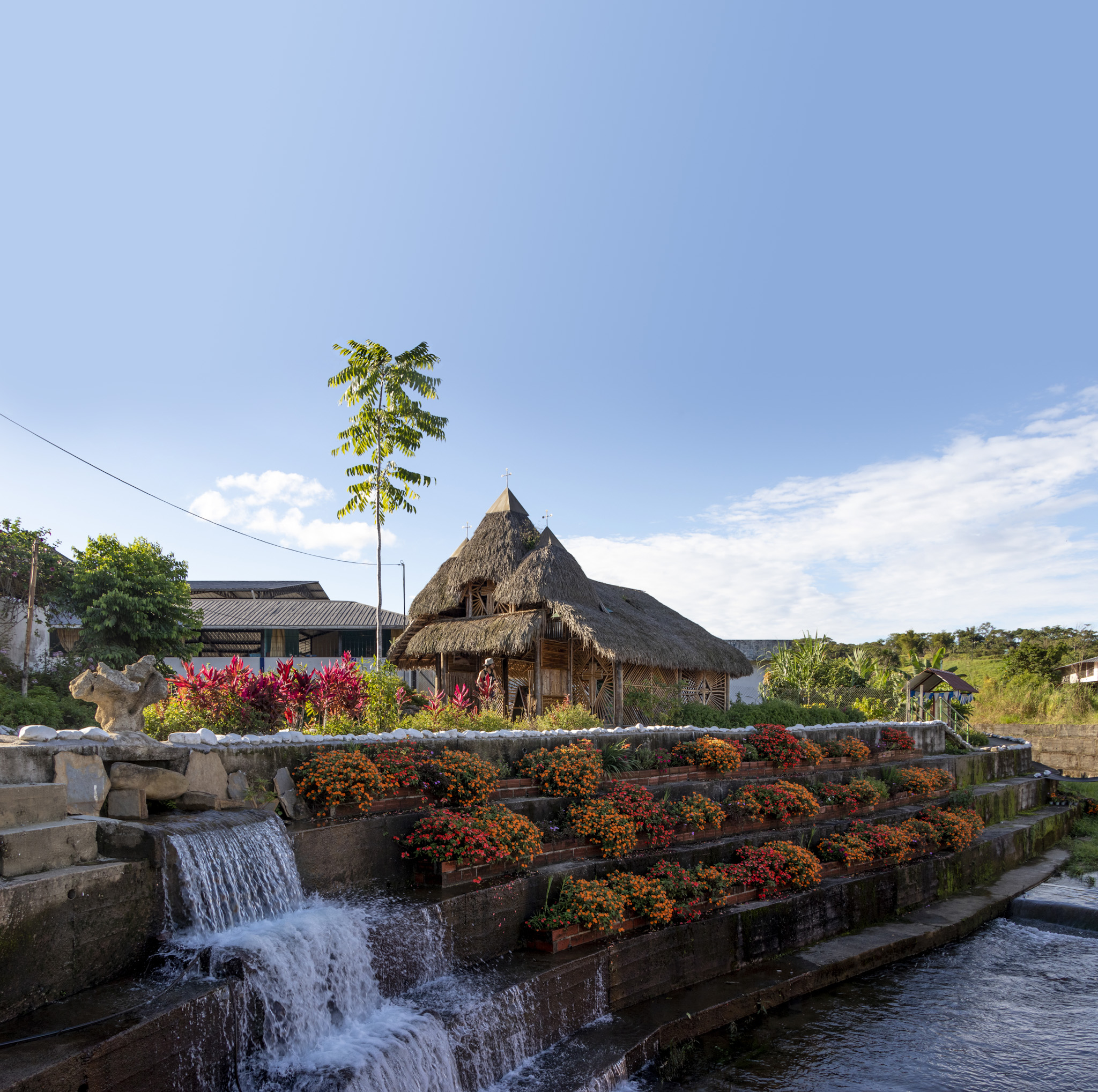 It seems like fiction, but the huge rocks inscribed with thousand-year-old motifs are still here. They literally serve as ancient interpretations of a previous world. Everyone knows about them. In fact, there is no native who does not know where to find them, yet there are few who dedicate themselves to studying what they mean.

The Ambato-born archaeologist, Pedro Porras, believes that the earliest Cotundo petroglyphs were created by the area’s first inhabitants, who migrated from the banks of the Pastaza and Santiago rivers. They could also have been created by the ancient navigators of the Amazon Basin, who arrived from the north of Brazil; but those who perfected the carving techniques were the Quijos, the last pre-Hispanic inhabitants of this region.

The history of Cotundo also lies in its museum: María Ñucanchi Mama. Located in the heart of town, next to the church, we can admire the archaeological remains found in the valley: axes, spearheads, bowls, even stones that, according to legend, help purify energy. Outside the museum we find an orchid sanctuary in honor of the Virgin of El Quinche. You can also visit the replica of the site’s first church by the river, decorated with colorful flowers. Father José is in charge of maintaining these attractions alive and well.

A sense of belonging 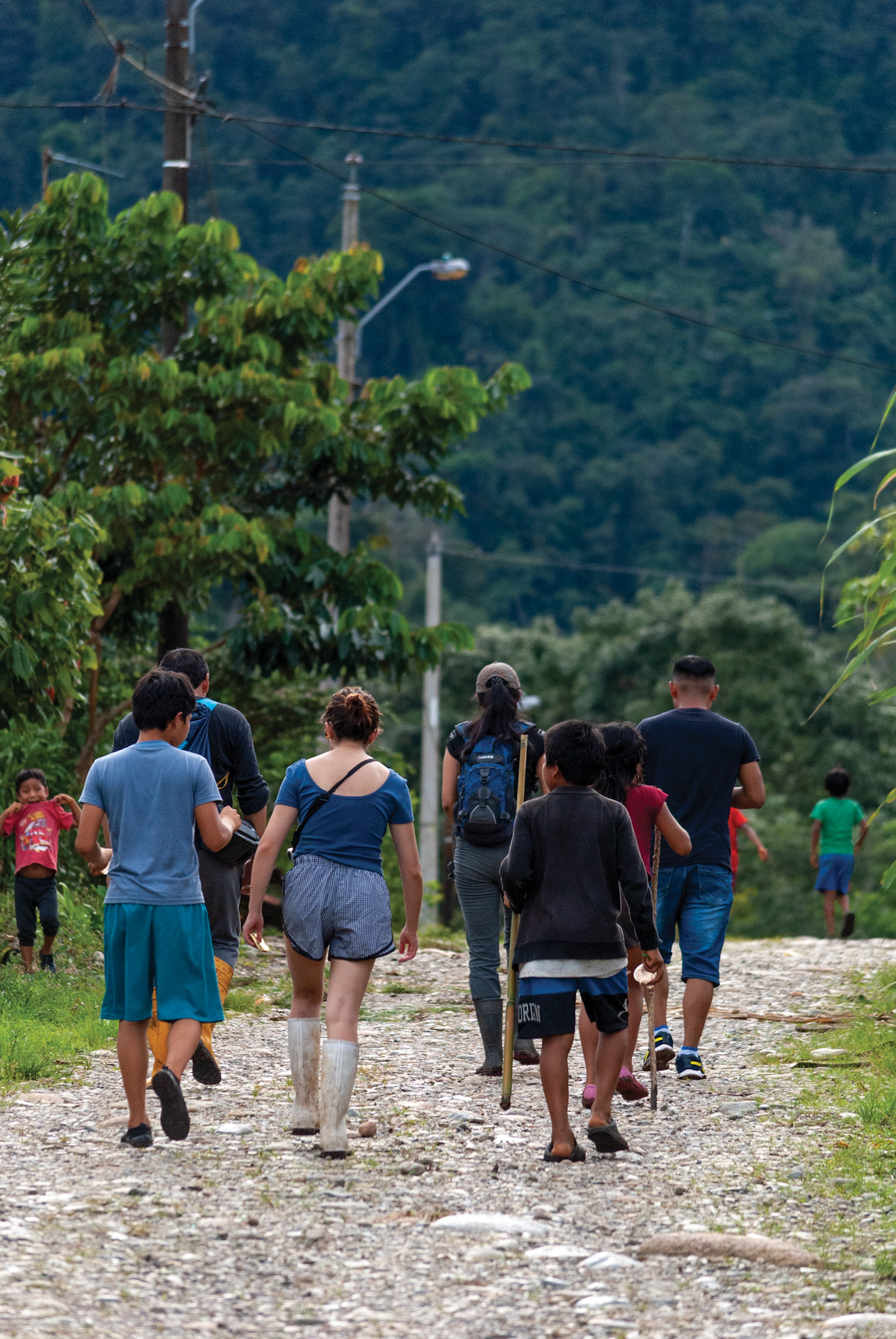 Passing Cotundo, towards Archidona, community tourism is on the rise. We visited a small community on the banks of the Misahuallí River: El Retén, a place your usual tourist would easily miss. However, we were told that the friendliness of the people here and the magical beauty of the surroundings are worth experiencing.

William was our contact. A native of the province of Santa Elena (in the Pacific Coast), his eagerness to tour Ecuador led him to build a camping/glamping project – Colembas Wasi – next to the village. Here, he met Marco and his family, with whom he has created a special bond.

Once in El Retén, Marco’s children – Yarina, Steven and Angelo – welcomed us warmly and led the way to Cocha Cocha, their “oasis”. This natural “spa” preserves remnants of what appears to be sand along the river. One can rest and unwind on this small river island next to a gigantic rock that the children helped us climb with a rope. Right in front, we discovered a cave that “captures” the community’s legends, such as that of people who have been petrified in the rocks for knowing the secrets of the river spirits that inhabit the area. 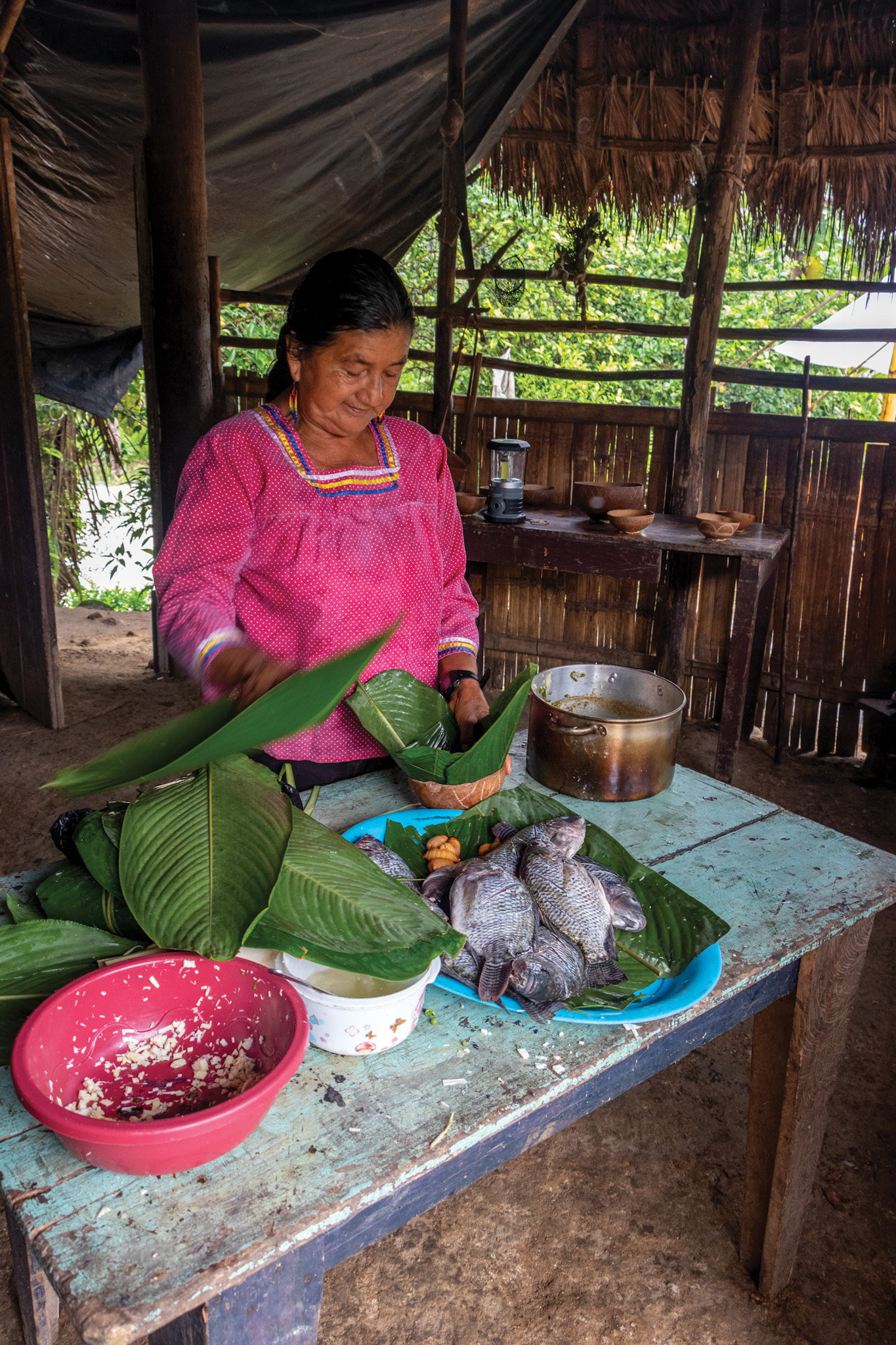 After a dip, grandmother Elena prepared three types of maito dishes (leaf wraps) with tilapia, chicken, and chontacuro (palm grubs). The third was garnished with a heart of palm salad and “garabato yuyo” (an Amazonian fern). She prepares them with almost no seasoning, only with the exact amount of salt: “the grill absorbs the flavor,” she says. The result is the most delicious Amazonian dish we’ve tasted! She accompanies it with Amazonian chili and a refreshing guayusa beverage, an ideal addition to the feast.

We recommend a night at Colembas Wasi’s humble, heartfelt project promoted by William in his desire to bring visitors to the area.

Other riverside sites apart from Cocha Cocha that we recommend visiting are Batancocha and Yanayaku; a half-day’s outing takes you to up to six waterfalls and unique geological formations.

Santa Rita is another community tourism project in the area well known these days because of its fine-grade organic cacao production. Edgar is a cacao farmer here and he generously opened his doors so that we could take a peek. The cacao he produces is the finest there is; so much so that world-renown Paccari Chocolate works with him. This is the ideal place to learn how the finest (and most eco-friendly) chocolate products in the world are made.

For those wishing to stay the night, new cabins are being built, christened Yaku Kawsay. Visitors will be able to bathe in a natural lake that collects the crystalline waters of the surrounding rivers. 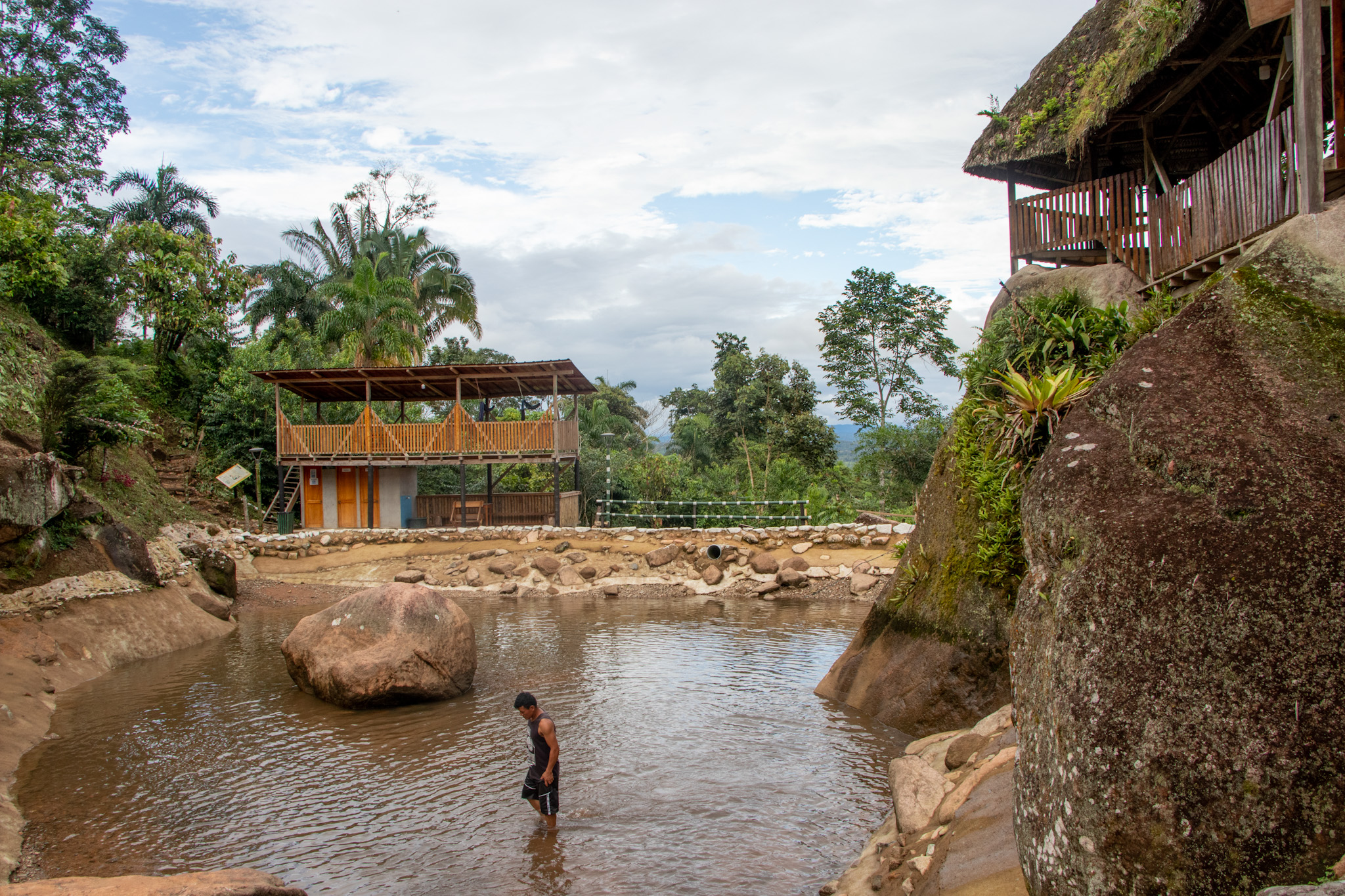 A market of unusual finds

Another highlight that will take you back to ancestral traditions is the Archidona main market. We recommend visiting on Sundays, the busiest day and, above all, the day to find a larger variety of products. Keep in mind, this is not your regular marketplace, as you will witness food items you have never seen before.

The fruits are, without a doubt, central to the show: there are two that must be cooked beforehand for consumption, ungurahua and morete. Both have a huge seed, so their pulp is scarce (as well as their flavor). Though they are still well desired by the locals.

A fruit similar to morete is salak, which comes from Indonesia but also grows in the area. Not a common find, there are a few farmers that bring it to the market. If you are lucky and have the chance to taste it, you’ll notice how it perfectly blends sweet and sour. 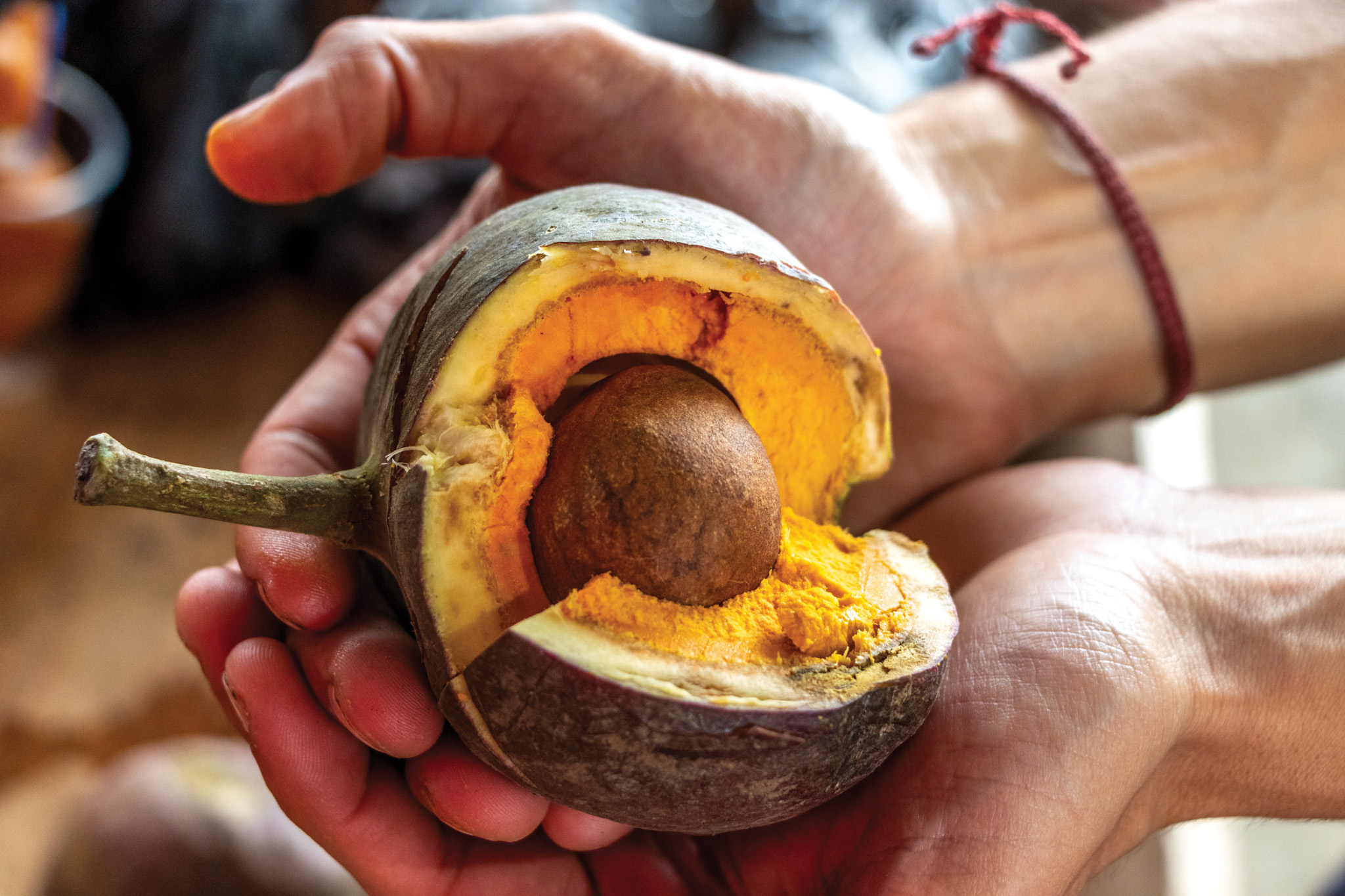 Other fruits such as avío, paso, pumarosa or mulchi make up the select group of eccentricities. These, unlike the salak, are native to Archidona.

We cannot ignore another fruit that not only caught our attention, but the attention of some of the natives as well: the aerial potato, a tuber that doesn’t grow underground, but on a tree. Its flavor is a mix between the common potato and a sweet potato, purple and yellow inside.

Finally, you can’t leave the Archidona Market without paying Juan Tapuy a visit. Everyone knows him as the ‘king of plants’. His humble stall, which he shares with his wife, is home to all the remedies for the soul and the body you could ask for; from ‘ready-made’ ayahuasca to a concoction he calls ‘the 24 plants’; although, he whispers, “it’s more like sixty”. 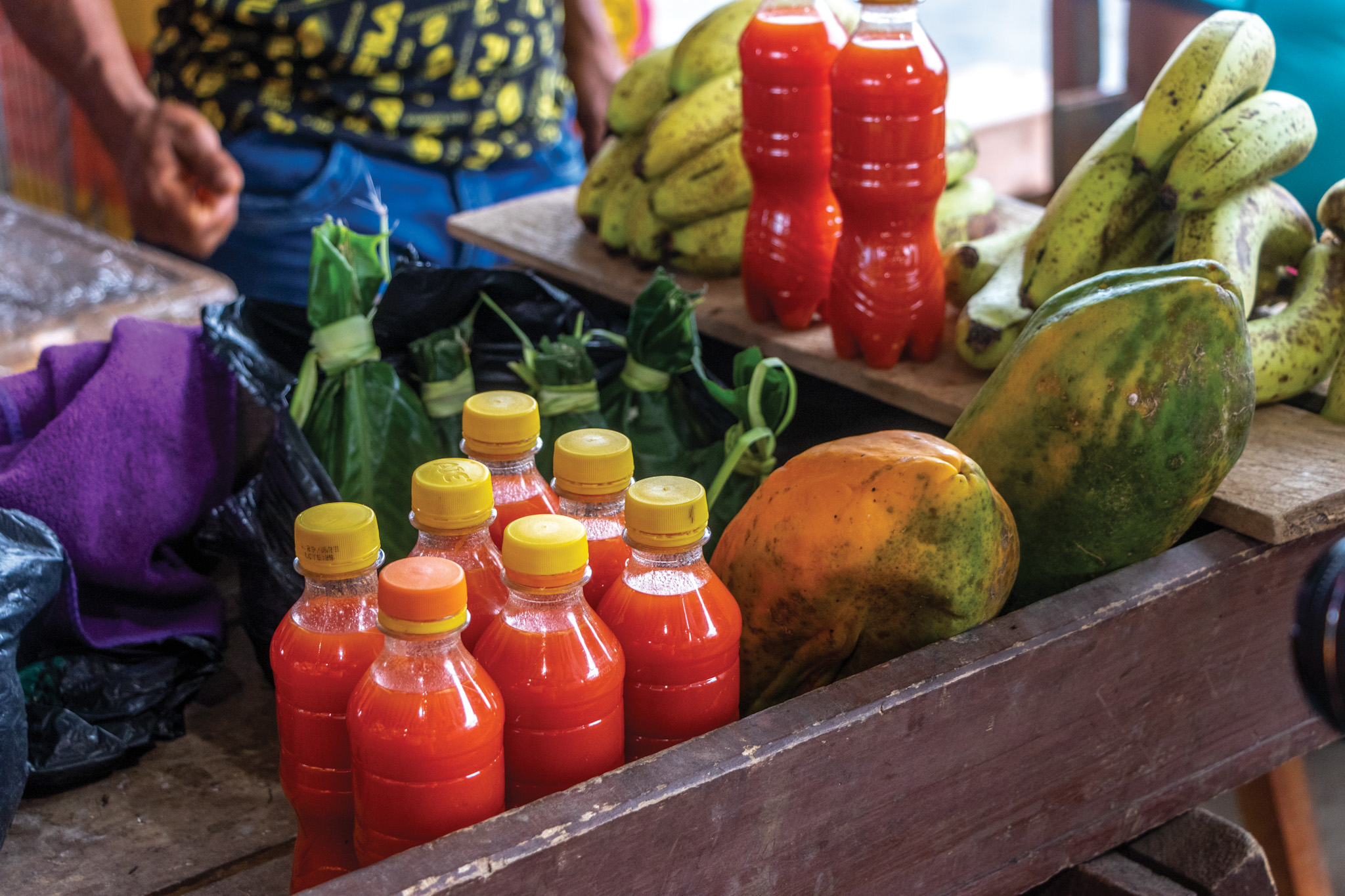 After visiting Archidona, we continued our journey back to Tena, the land of the guayusa plant and cinnamon, on our way back to Quito via Baeza. On the road, a sign caught our attention. It read “El Churo, spiritual healing center”. We had already noticed other ceremonial “spas” along the way, so we couldn’t leave without visiting one.

You could say the dwelling is surrounded by magic. From the moment you walk in, you see ancestral plants and blue mushrooms sprouting all along the slopes.

Waiting for us inside a colorful cabin was Llullo Grefa, the keeper of this unique abode, who would soon take us on a storytelling ride into the heart of his jungle-ridden land, walking barefoot to ‘connect with the environment’. He told us that in these forests his ancestors performed transcendental rituals with natural medicine. We asked permission to walk inside what we thought was a cave… but it was much more than that.

As we walked along a lake, a stone “curtain” suddenly opened before us, as if bringing back the secrets of the past in front of our very eyes. The history of a planet seemed to unfold, when land was covered by water. We could see petrified fossils everywhere, surrounded by shells (which give the place its name). 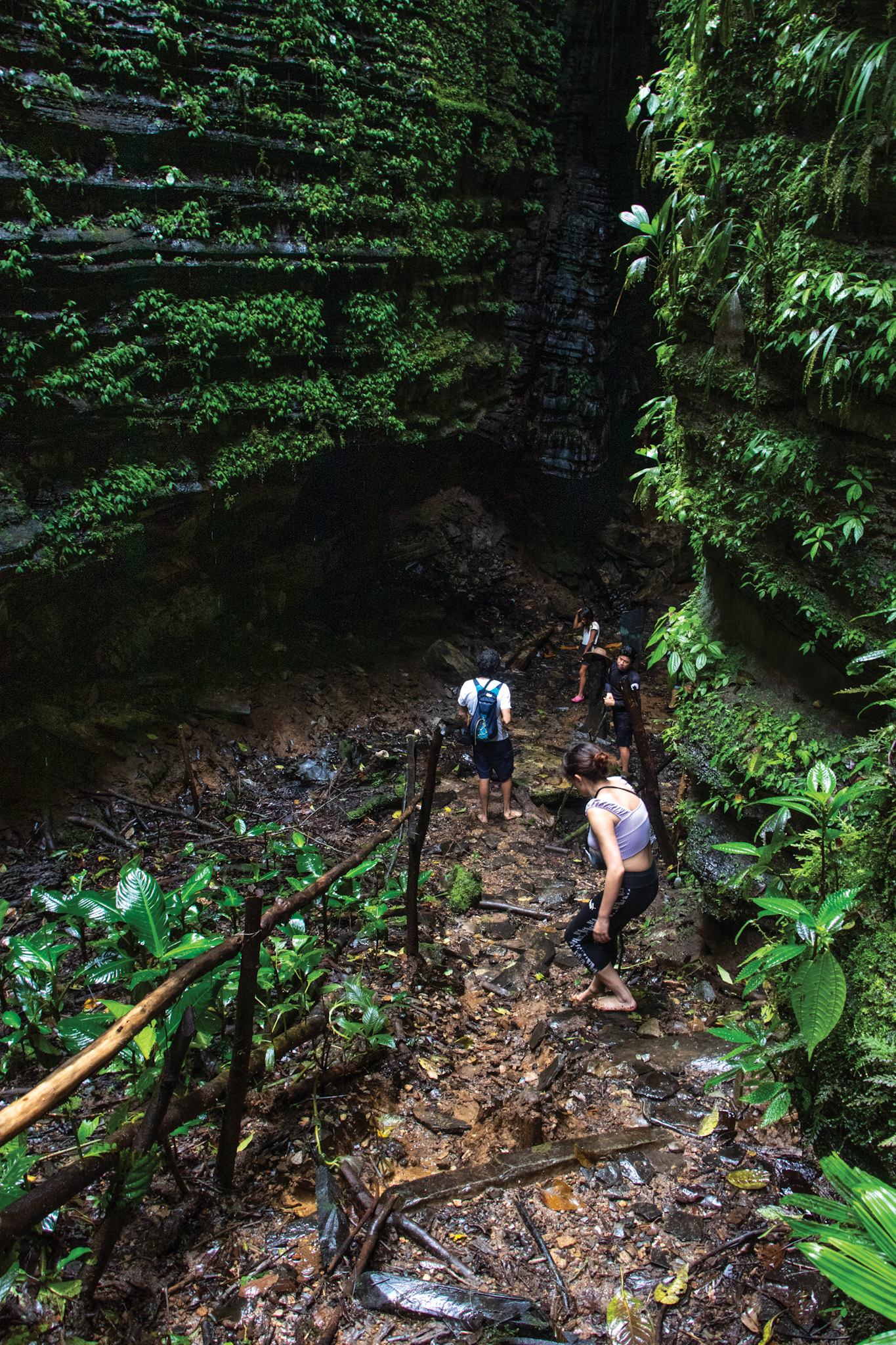 Llullo sat us in a circle and asked us to close our eyes. He proceeded to tell the story of his great-great-grandfather in a fantasy-tinged meditation. In this state, he offered us tobacco, his “medicine”, with a dropper. Sitting on rocks, still barefoot and surrounded by the surreal landscape, he requested we offer an “intention” to the spirits, to honor the moment. 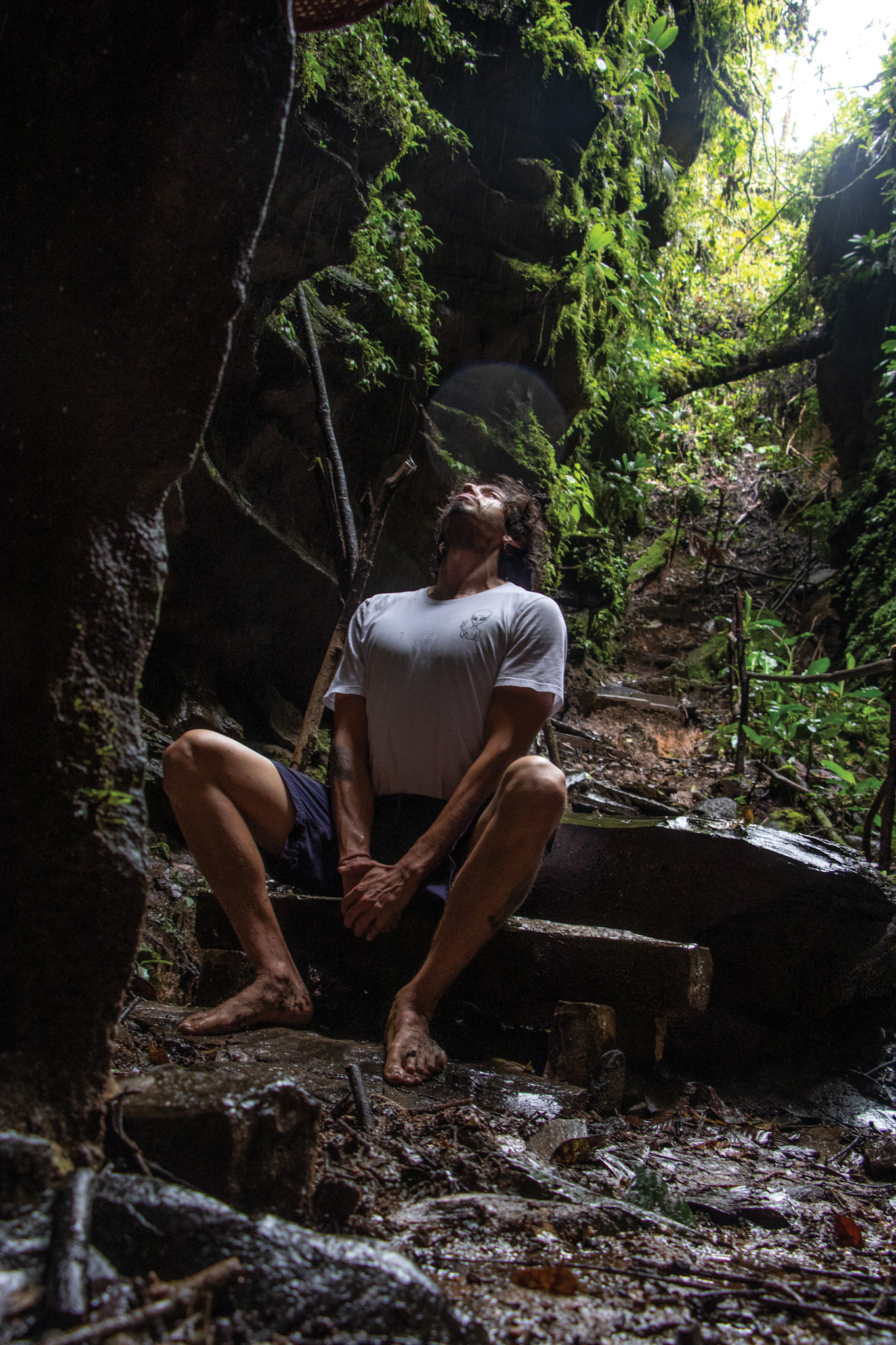 I’m not going to lie, but when I came into contact with the sacred liquid, I knew these lines would be written. Grateful for the sublime moment, I felt time fleet by, as I do now, dreaming of my return.