“If you’re not in tip-top shape, this stuff can knock you sideways,” says a regular.

Néstor Rendón calls his little spot at Mercado Los Sauces 9 the “Seafood Honeycomb”, but you won’t see the name exhibited anywhere. Most of his clients, including people who buy his frozen, carefully packed product for their airplane rides home to Rome and Paris, do not know that he officially occupies Lot 13 of the ​​market (the number is nowhere to be seen). The best way to locate him is to walk into the market through door number eight. He is the first stall to your right.

At his spick-and-span market stand, Nestor prepares all kinds of ceviches. Some in the “Iron Man” and “Resuscitator” categories can include up to eight ingredients of sea and river fare: oyster, scallops, squid, crab, octopus, shrimp, conch, and fish. He chops the ingredients up before you, adds avocado, onion, cilantro, lemon and olive oil and, before you can say Golden Arches, the dish is ready. “If you’re not in tip-top shape, this stuff can knock you sideways,” says a regular, while we witness how Nestor opens shells with a tiny hatchet, cleaning each and every instrument after each and every use, so as to not leave the slightest trace. The place is a hit!

The world record, however, for “shellfish in a single ceviche” probably goes to Wilson Andrade, owner of La Balandra, a classic Urdesa neighborhood joint that recently moved to a shopping complex in Samborondón. To the previous eight seafood ingredients add clams, mussels, endemic ‘pata de mula’, pangora crab, jaiba crab, river and sea snails, lobster, langoustines and others (count up to twenty), including legendary Spondylus shells (when in season), creating the unforgettable “H. P.”, better known as High Power Ceviche.

That Guayaquil has some outstanding seafood should come as no surprise. Afterall, it lies in the largest river delta of the largest of worldly oceans. The seafood arrives straight from the source to the city’s veritable backdoor, the Municipal Market of Caraguay.

Every restaurant worth its salt sends a representative to seek out the best produce here. From CARAGUAY, seafood is distributed far and wide throughout the city and beyond.

It’s a chaotic place. Workers hoist up bundles of fresh fish and live crabs still pincering from canoes that arrive at the docks, while herons look attentively on, as chefs and restaurant owners trade with their favorite sellers. Italito Zambrano, secretary of his cooperative of sellers, and former secretary of the market itself, learned to fish in the mangroves with an uncle, and became an expert after years of practice. “It is not easy at all… but you try and you try because you like it,” he says with a nostalgic smile. Today, he can only manage to fish on special weekends, but he keeps the habit because he enjoys it so, especially catching crabs. 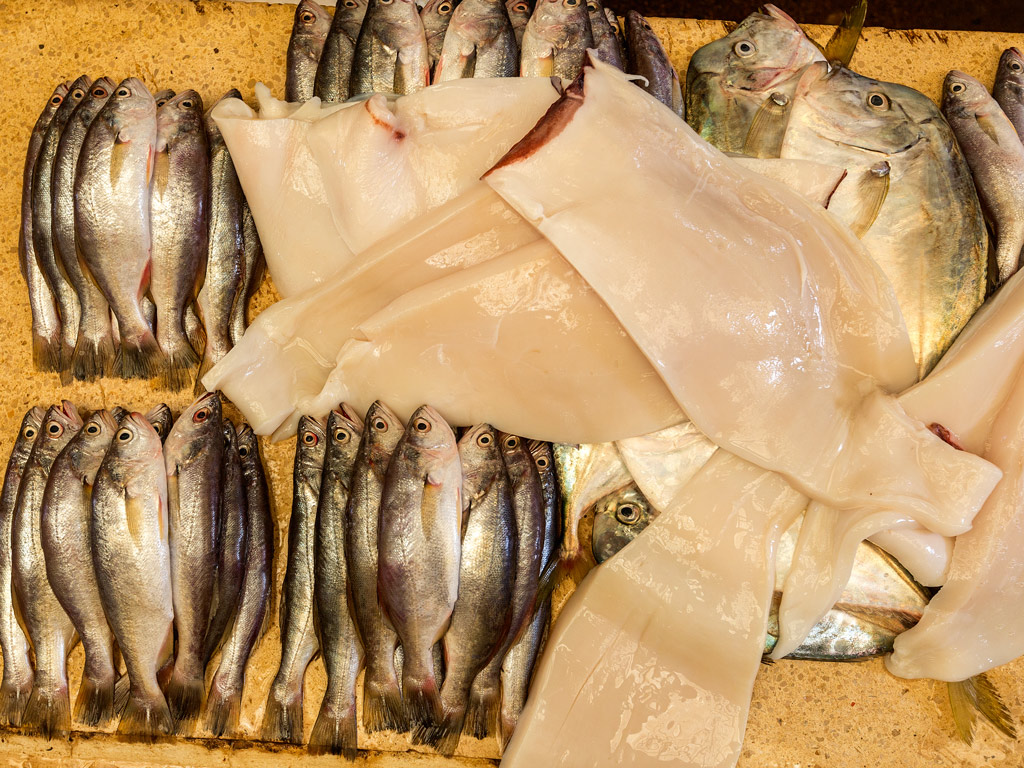 Wilson Andrade is also an avid fisherman. When he gets the chance, he makes a point of reaching the farthest points south, near Puná Island. “No, I’m not worried about getting poisoned by seafood. Let’s just say that I eat what I catch. Once, I actually grabbed a phosphorescent one… I’d never seen something like it before, or since… I took it home, stuck it in the pot and ate it. Of course, I ended up in the hospital, hallucinating, but hey, here I am!” he says this before insisting that I stick my spoon into his H.P. Ceviche… Hey, what can I say, here I am, too!

This classic fish market, located in Barrio Cuba, at the very edge of Barrio del Astillero, is considered by many the beating heart of the port city of Guayaquil. The seafood which fuels its citizens is supplied from here, funnelled in from the gulf and the river delta. There isn’t a moment’s rest here. Open twenty-four hours, with a northern retail market operating by day and a southern wholesale market open all through the night (with food kiosks to feed those who come, work and keep the place going), walk inside busy “Caraguay” at any time to get closer to the soul and history of this city: a living, breathing museum replete with everything from Moby Dick-size tunas to weeny snails, where one can witness the triumphant return of fishermen, a ritual unchanged in this part of the world since time immemorial. 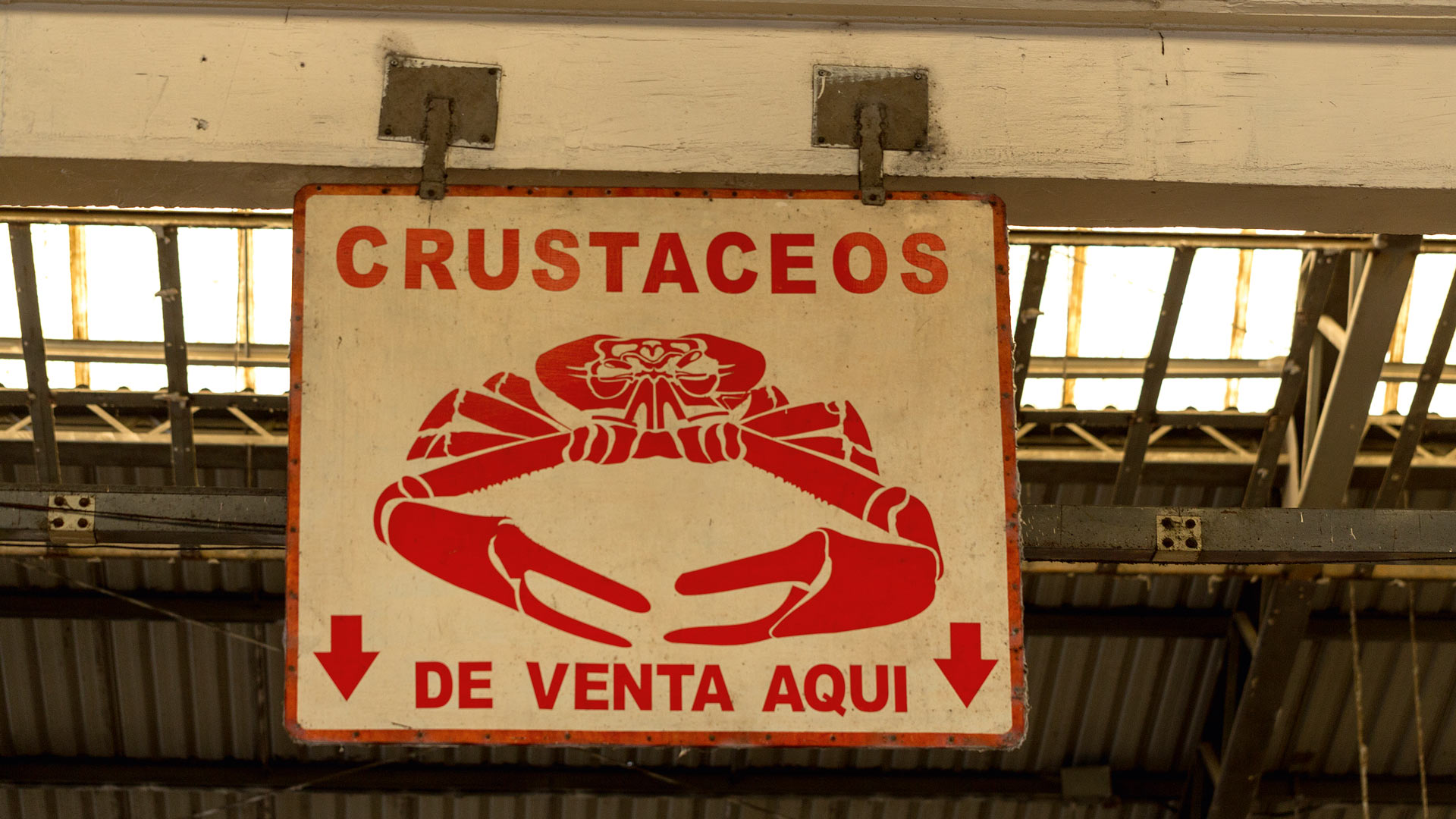 THE TABLE: it must be set with newspapers, a wooden hammer, a board, and a plastic basin to discard the inedible matter.

The crab is then boiled for fifteen minutes, and placed in cold water.

“FINGERS” AND “LEGS”: Break the joints carefully, hoping to keep the flesh on the cartilage as you separate each joint. To get to the meat you weren’t able to niftily extract, hammer at the shell, softly, so as not to smash the meat.

LA PATA GORDA (THE BIG CLAW): Place the movable part of the claw towards the table and hammer at the top edge, until the shell cracks open and you can get to the meat.

THE CARAPACHO (HEAD): You’ll find a tongue-like crust along the crab’s belly. Break this off and the fat found inside, and eat. Stick your fingers into the middle of the head, and take a firm part, the gall, out. Discard. Then push the eyes in with your thumbs; suck on the eye socket. Lick lips. Once the head and limbs are off, the chest remains. Crush it with your index finger and thumb, allowing you to break this part open, revealing delicious white flesh inside.