We sought out a local cook to showcase the flavors of Santa Elena. She took us out to the market to fill our refrigerator and in the comfort of our beach house, we learned to prepare half a dozen classic Santa Elena dishes with only a handful of ingredients…

Someone once said there’s great beauty in simplicity. But when it comes to food, “simplicity” certainly has two facets. One is genius, the other… trivial. A plate of salchipapas (fries and wieners) is simple. A ceviche (seafood cooked in lemon) is also simple. Yet the former is trivial, and the latter is genius.

Lucy Merchán is an expert in simplicity. She’s practical, does everything quickly. Nothing takes over a half hour. She doesn’t use a blender or the microwave, just a grater, a knife, a wooden ladle, a (hard) beach stone, and a cutting board. Anyone might say that garlic shrimp or ceviche are simple recipes. 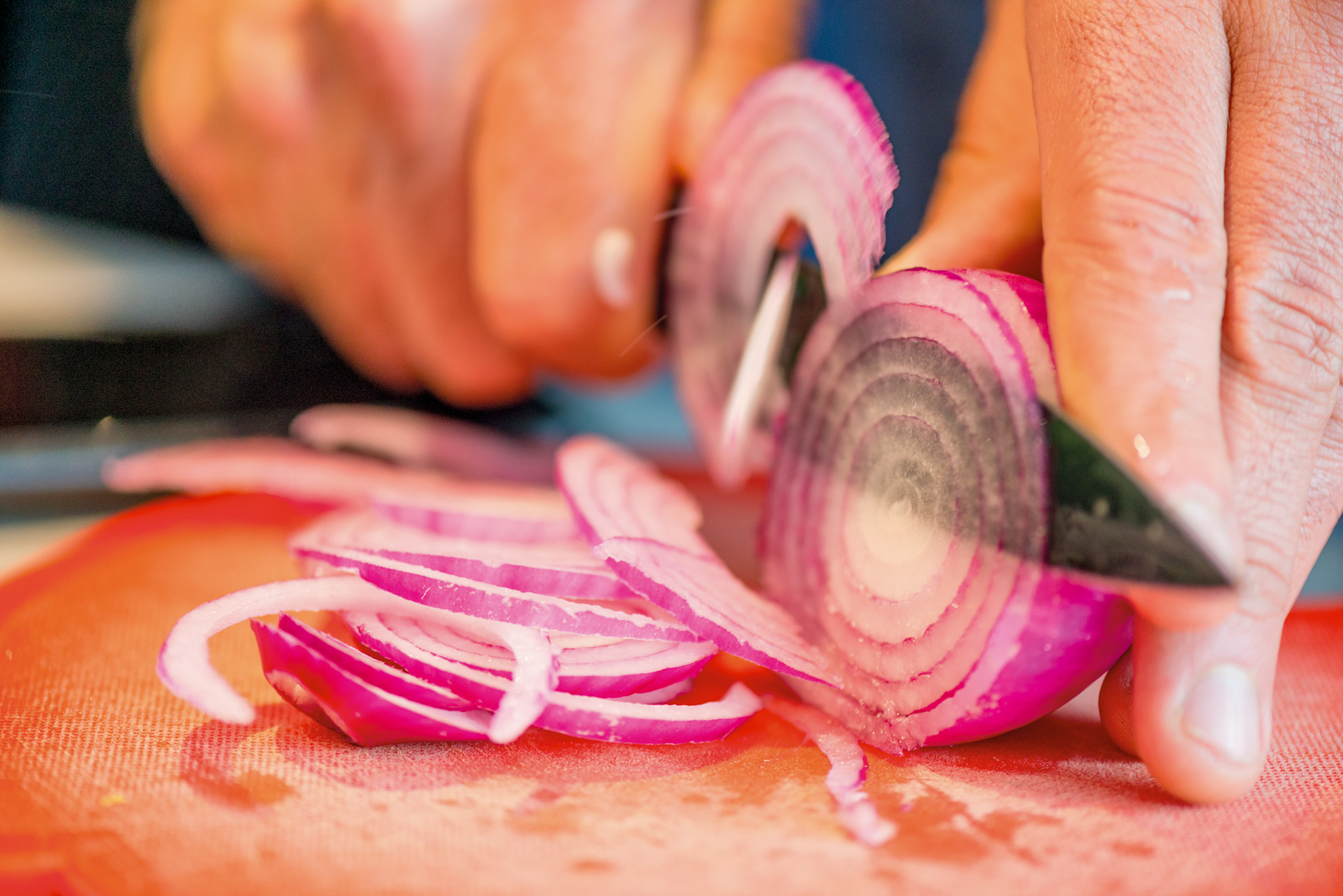 But what is the secret of simplicity, ingenious simplicity? After witnessing it with my own eyes, I don’t know if I quite yet know, but what I have learned is that it all begins at the market. In that everyday strife to negotiate the best price with the local vendors and to select the most beautiful shrimp, the slenderest Dorado fish. Lucy doesn’t beat around the bush: “We need to go to La Libertad. The Salinas market is expensive.” (“Expensive” meaning that it has no soul: “They freeze the fish over there!”).

I’m game. Let’s go to La Libertad. But we must follow some rules: “Don’t carry a wallet. Calculate the change you’ll need for all the ingredients. Don’t bring large bills. They’ll break a twenty, but I’d rather you took ten-dollar bills. This has to go quickly.” A careful operation it was to be.

You know you’re nearing La Libertad market when the pedestrians move faster than the cars on the street. People begin to slip between the bumpers, traffic stalls. Everyone seems to be adhering to the same rules, a lot of loose change, wads of five-dollar bills between their fingers, coins in hand. The sun is scorching, so sitting in the car is unbearable. We are lucky enough to land at a parking spot right in front of the spice shops. Lucy is pleased, as finding parking can be tricky. It’s the only thing you can never plan ahead for (which is why she prefers to take the bus).

We are standing in front of mountains of cassava and corn, pitahayas, avocados and cilantro, listening to a mango vendor yelling out prices. But Lucy has already crossed the street, to the seafood market. 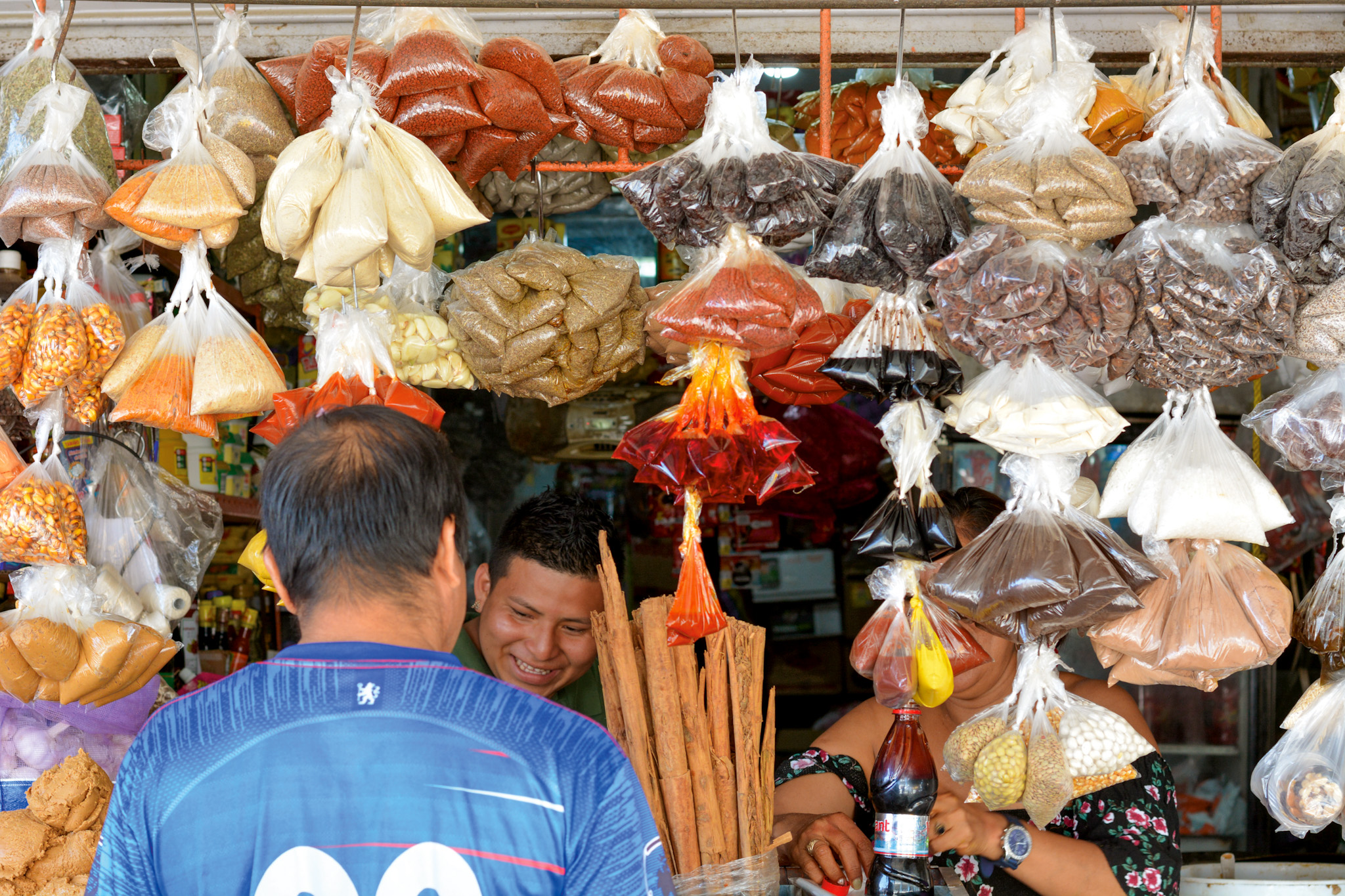 Fish galore: angry fish, big-eyed fish, fish with large foreheads, thin fish, tiny fish, gigantic fish; squid, octopuses; buckets of different-sized shrimp. In the blue tray, they go for six dollars; in the green tray, for three. “This spot is the cheapest but the seafood is the best,” says Lucy, picking up a couple from each tray, dangling them from the tail as if to weigh them. The difference is almost insignificant, she explains, so we should go for the cheaper ones. “Three pounds,” she tells the vendor. Nine dollars total, at least half of what it would cost in any other city.

We then move on to the Dorado (the ‘golden’ fish) stand. A large one is enough for three fish recipes. Of course, you need the entire fish. The man takes out his knife and fillets it. He separates the bones from the meat, and then removes the head under Lucy’s austere gaze. “The head is very important,” she says as we hurry back across the street towards our car.

Now it’s time to use the change: we buy a different ingredient at every stall. Lemons, two oranges, cilantro, cassava, corn, green peppers, avocados. At the spice store, you find countless bags containing everything you could possibly need, from cumin and oregano to annatto (achiote), raw or already cooked in oil. Off to the side, the final ingredient of our purchase: “maní”. A mountain of peanut paste, which does not go unnoticed. A good spoonful and we’re ready to go.

Lucy doesn’t remember when she started cooking. It’s like she always knew how. She remembers that ever since she was a little girl, she was always curious to learn new dishes; this passion followed her since birth. When I ask her about her talent, her speedy response seems rehearsed: “the secret is always a good refrito (sofrito).” I’ve heard that “secret” before. Most coastal cooks would agree with this statement, though I just can’t bring myself to believe that it’s really that simple: green peppers, tomato, garlic, and red onion fried in oil colored with annatto. All diced finely, the garlic crushed with the sea stone. Salt, pepper. It seems that all “good” seasoning is born of this mixture. It is the base for many recipes, complementing the final step, the coriander one adds at the very end, providing a subtle layer of flavoring. 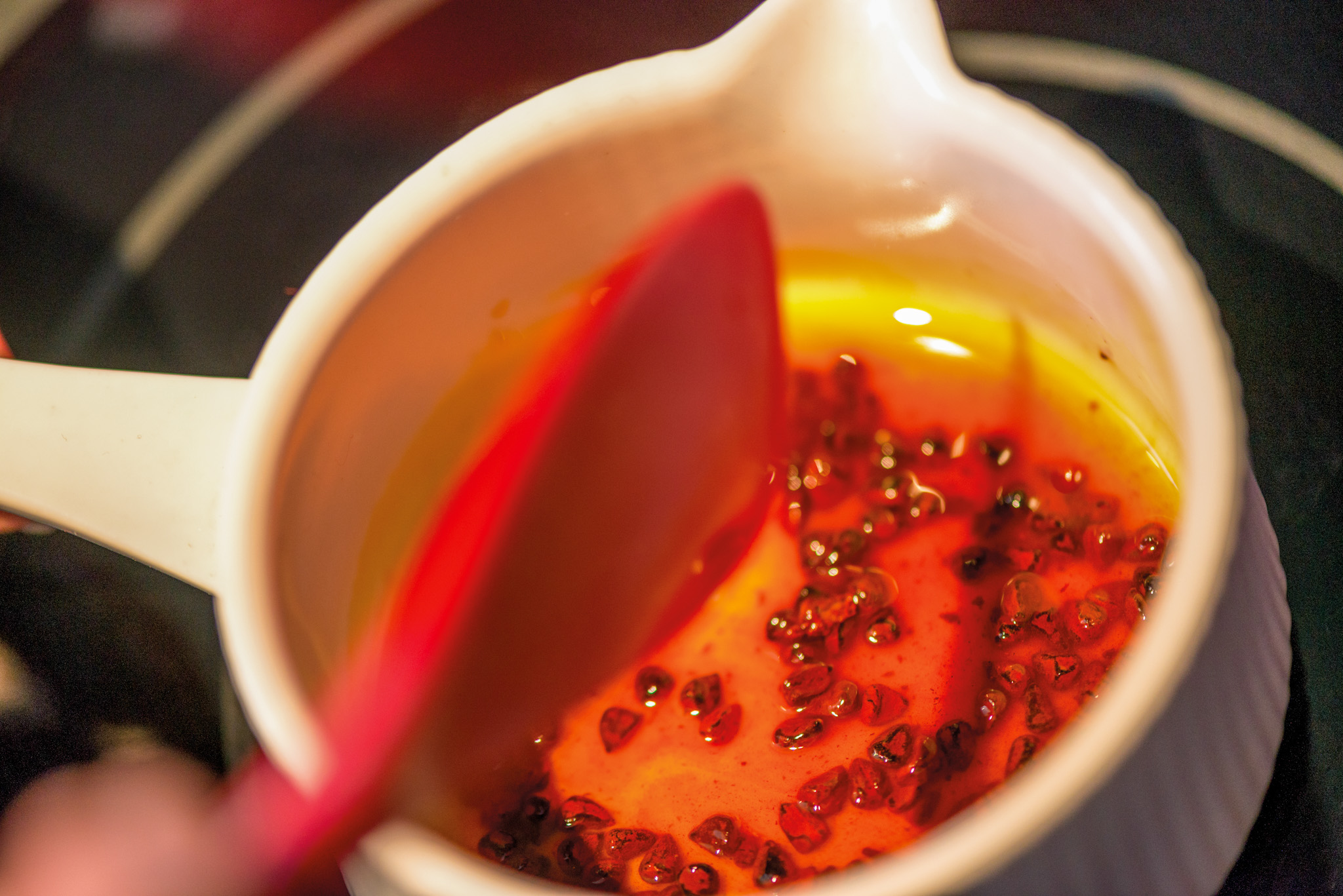 5 dishes in an hour
Five dishes in a little over an one hour. A true Santa Elena feast. 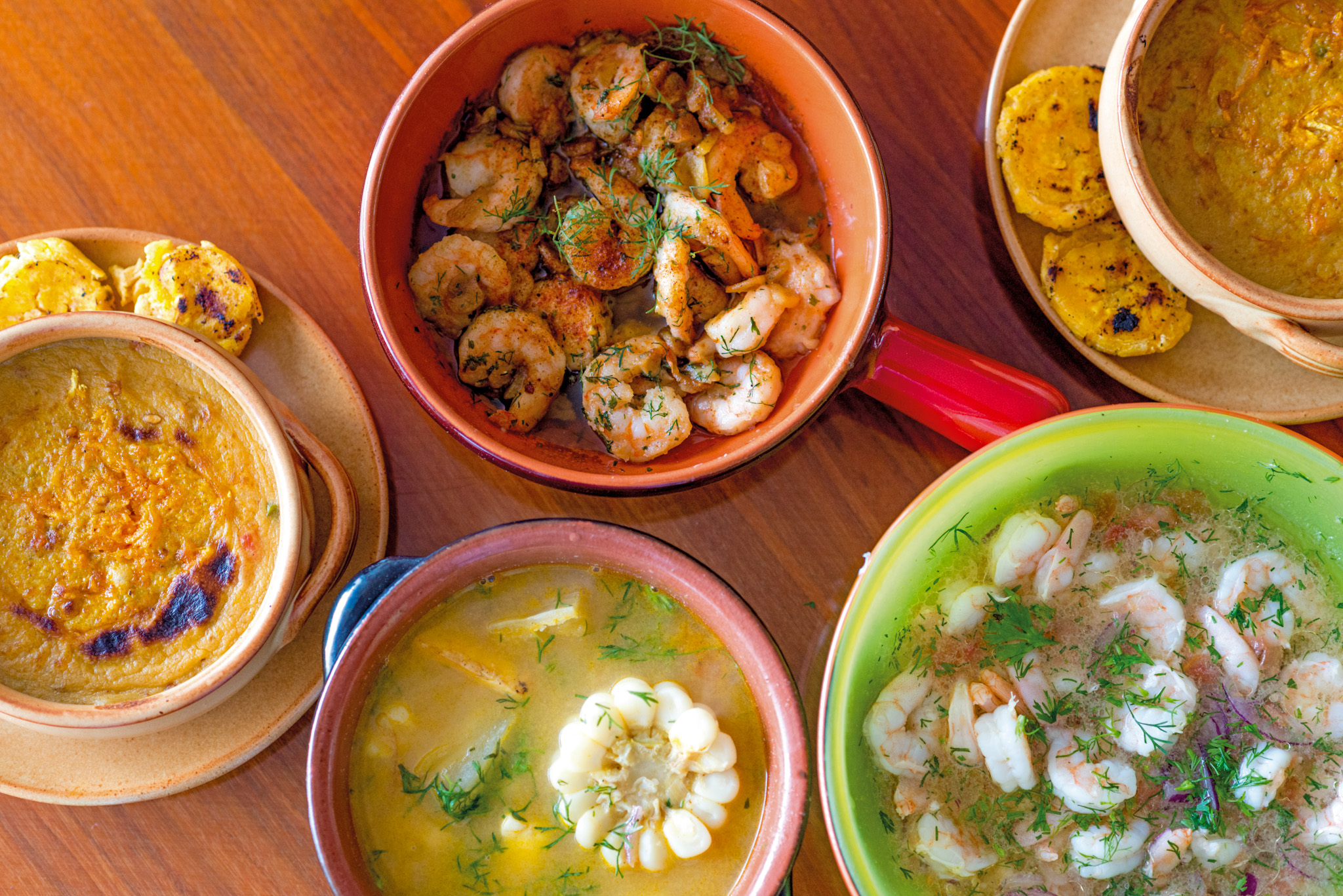 Five dishes in an hour…can she manage it? Consider the time required to devein the shrimp, make the Dorado-head stock for the sancocho soup, and chop the other ingredients, which Lucy had already done, and she says it is possible. When the stock turns brown, she removes the head and extracts the remaining meat. “How long do you let it boil?” I ask. She can’t say. She’s internalized the entire affair. She takes half of the shrimp and cooks them in a pan with a little oil. In a minute, they let out a gray liquid, which she pours out into a separate bowl. She places the shrimp in the refrigerator; adds the juice of two bitter oranges to the shrimp liquid (I gather you could use a lemon and an orange if your oranges aren’t bitter). She peels a tomato, seeds it, and mashes it with the sea stone; adds chopped onion and coriander and mixes it all. Into this mixture she tosses the shrimp from the refrigerator.  First dish down: shrimp ceviche.

In the pan where the shrimp was cooked, she makes her sofrito. She adds in the rest of the shrimp, squeezes the juice of half a lemon over it, and quickly adds the coriander to the finished dish, along with a bit of oil. Second dish: shrimp in garlic sauce (camarones al ajillo). 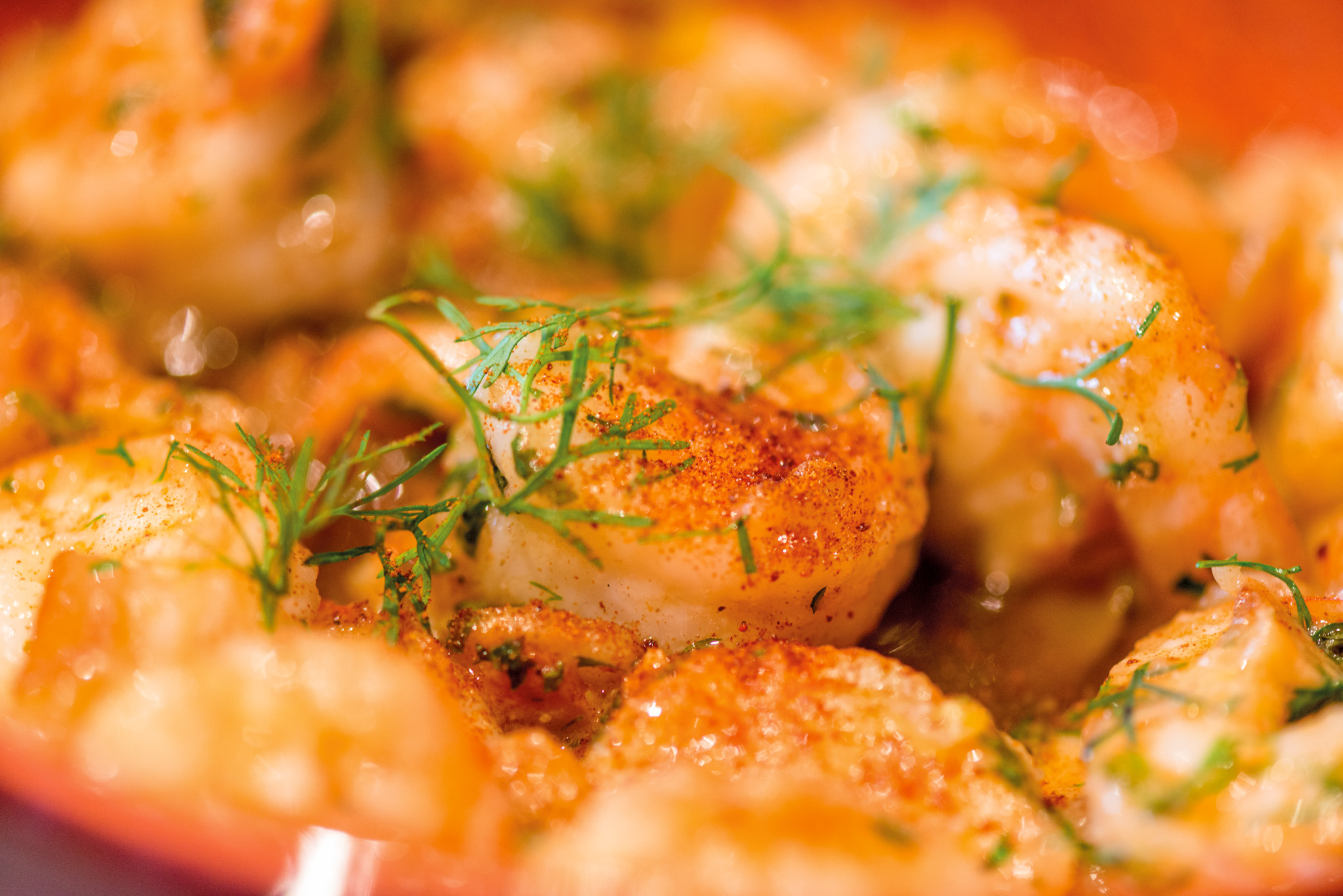 She fillets the Dorado meat and smothers it in garlic and salt. She breads some with flour. In another pot, she makes another refrito and spreads it over the cassava and green plantain. She pours the fish-head stock into this pot and when it boils, adds the corn on the cob. This is the sancocho. She boils the cassava and corn, adds a spoonful of peanut paste, and to finish, some coriander. For the cazuela, she grates a green plantain, hydrates it with a bit of water, and adds the peanut paste and some salt. In a clay pot, she mixes some of the diced fish with the plantain and peanut paste, placing everything in the oven with some cilantro, and bakes for twenty minutes: one cazuela to go! The remaining diced fish, already marinated in garlic, she placed in the sancocho soup. In ten minutes, that is also done. Then she fries the fillets. And voilà. Five dishes in a little over an one hour. A true Santa Elena feast. 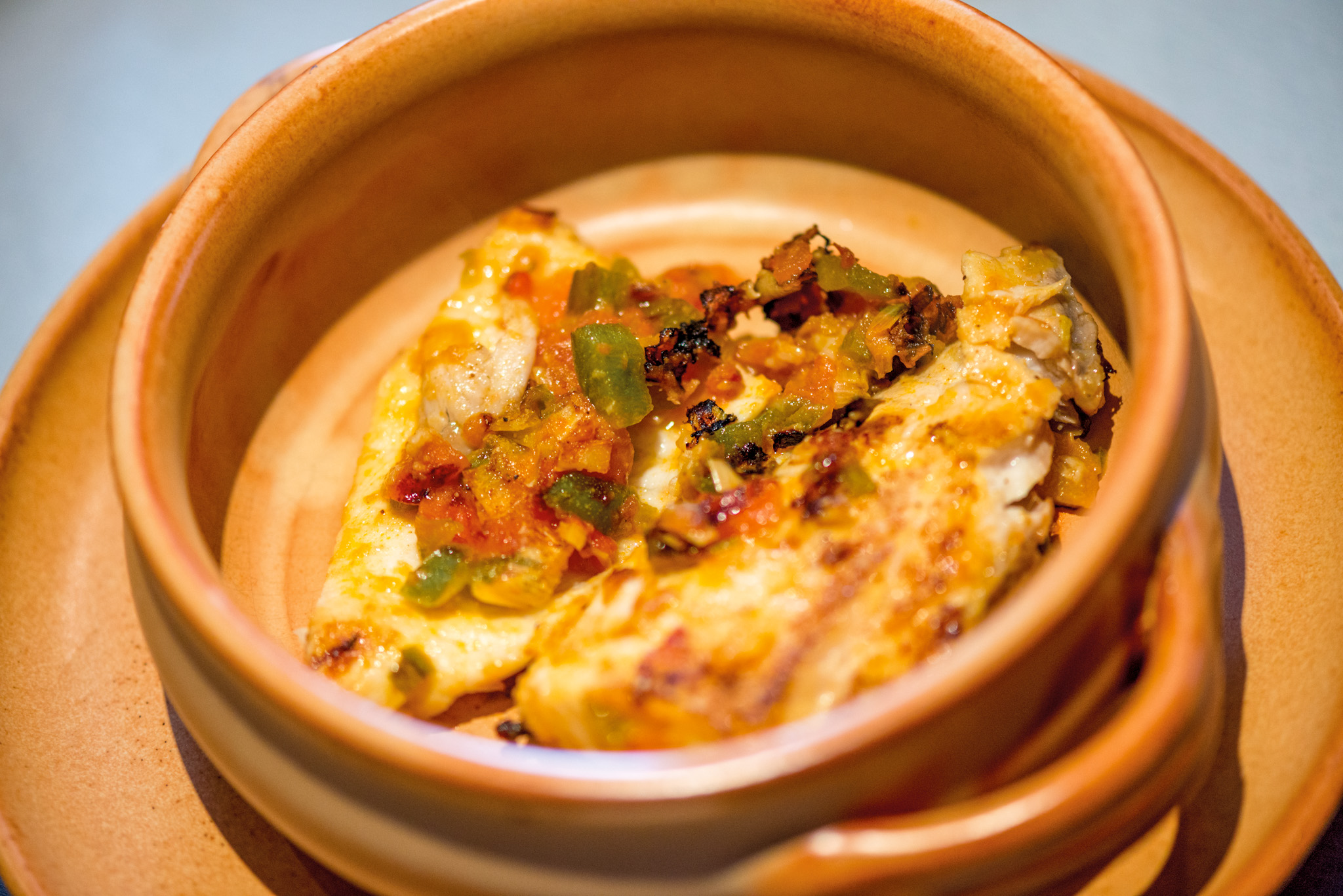