There are few destinations that unite three earthly perspectives into one: sea, land, and sky. Salango, south of Manabí, is known for seafaring visits (including  humpback whale watching), coastal hikes, delicious food and, from nearby beaches, the opportunity to see the entire area from the sky on a paraglider, at an altitude of 400 masl. 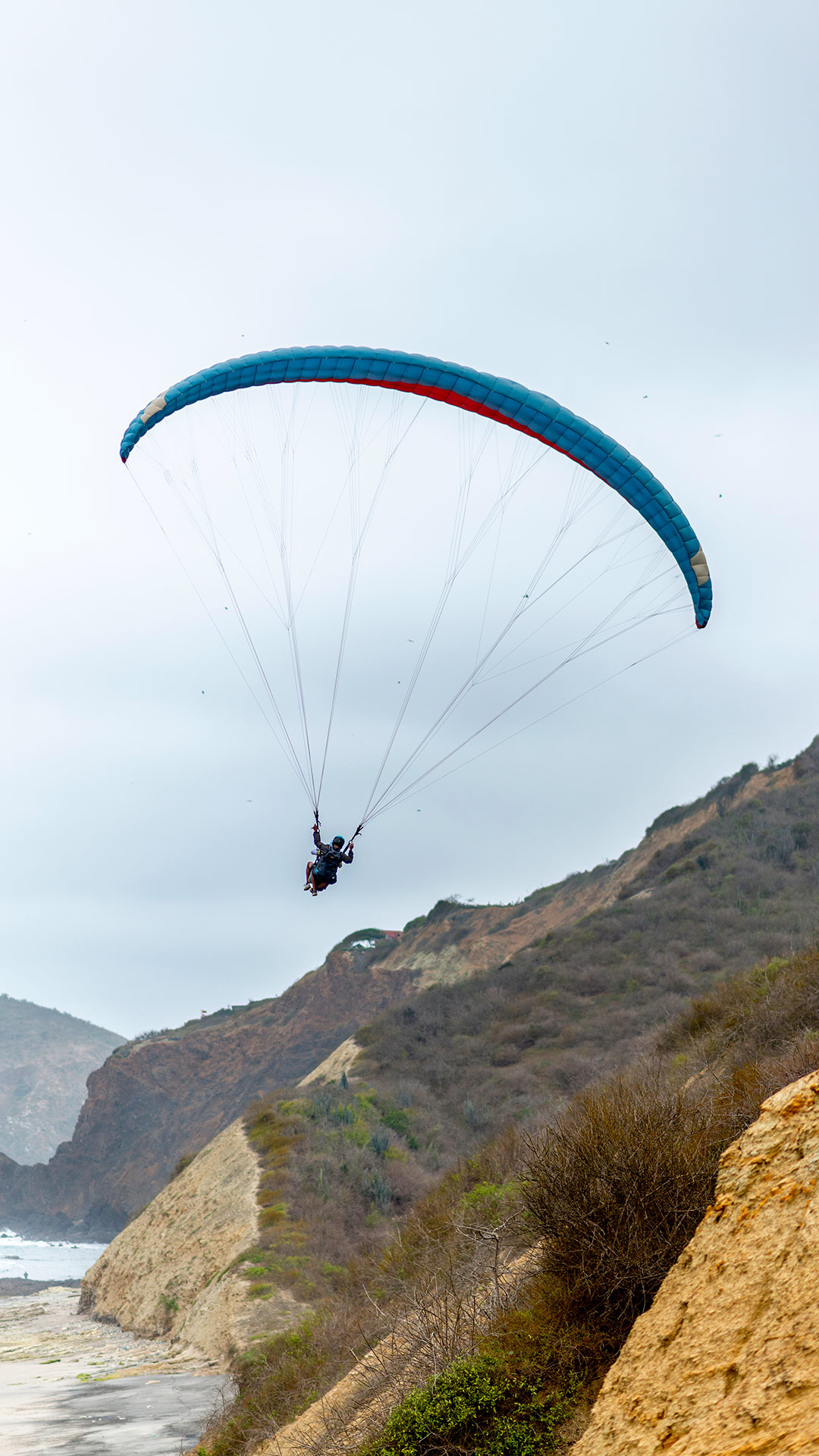 We arrived at Piqueros, an uncrowded beach with a view of Salango Island. This paradisiacal site, dominated by captivating views, crystal clear waters and coral reefs is also a go-to place for paragliding teachers and students. With good wind currents and little experience, anyone can embark on this adventure with them.

Gabriela is about to try out her new outfit. This is not just any gear; it’s the first time she wears it. She has been practicing for some time with Jorge Mora, from ParapentEcuador, who has dedicated his life to this sport for over 25 years. “The feeling of being up there is just indescribable,” she says, “it’s absolute freedom…”; she doesn’t look up once, deeply enrapt in unraveling the paragliding threads. 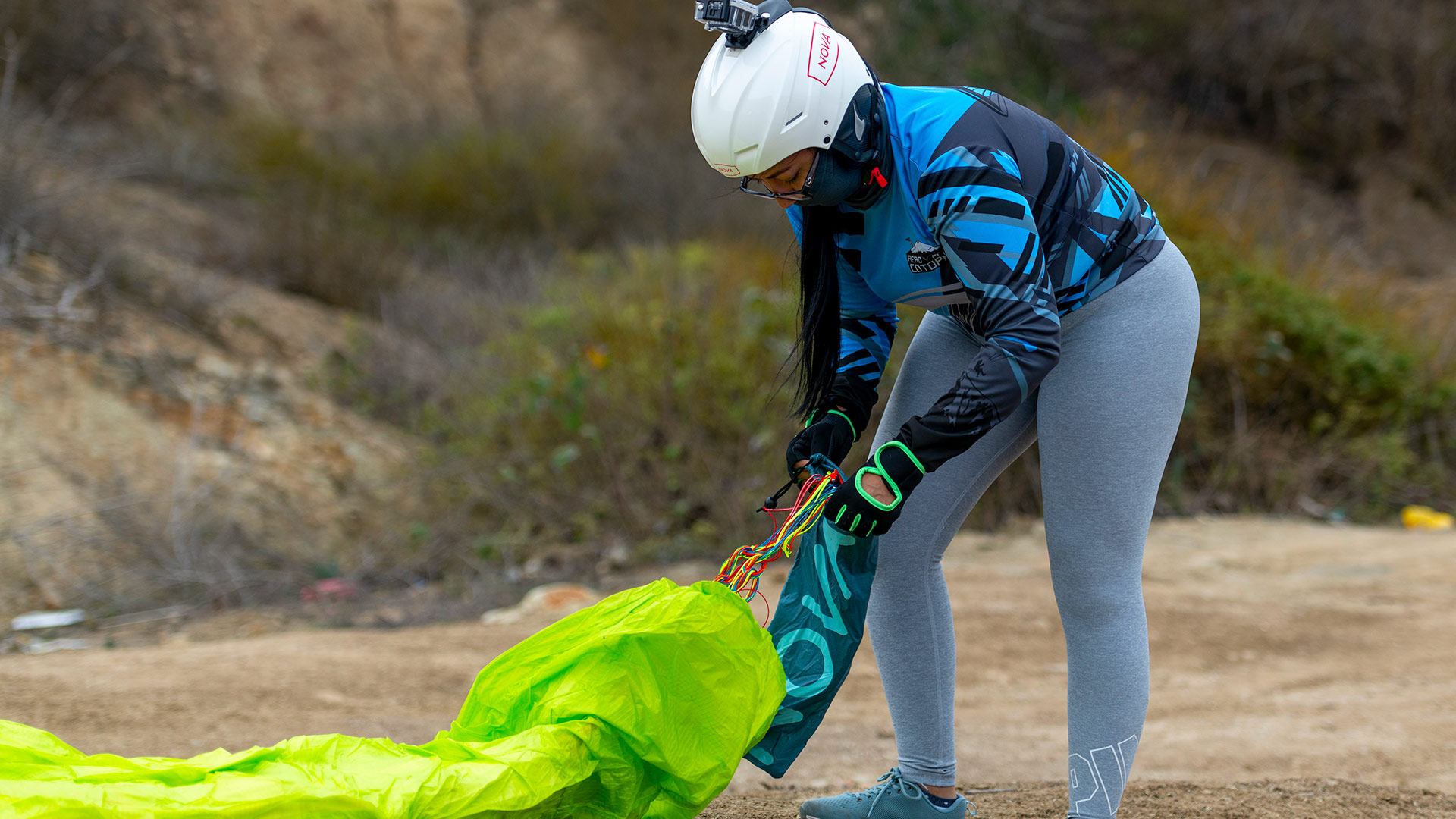 “There is no place in the world where you can paraglide and see whales at the same time,” explains Jorge as he points out to the ocean. As if by magic, a whale appears in the distance, clearly standing out against the waves. Manta rays, sea turtles are also often seen from here; even sharks.

A fluorescent green paraglider unfolds in front of us. The threads flow as the breeze loosens them. With a few tugs, the entire contraption comes into place as we also get an idea of ​​the wind’s direction and strength. One must be patient, feel and know the right moment for take off. 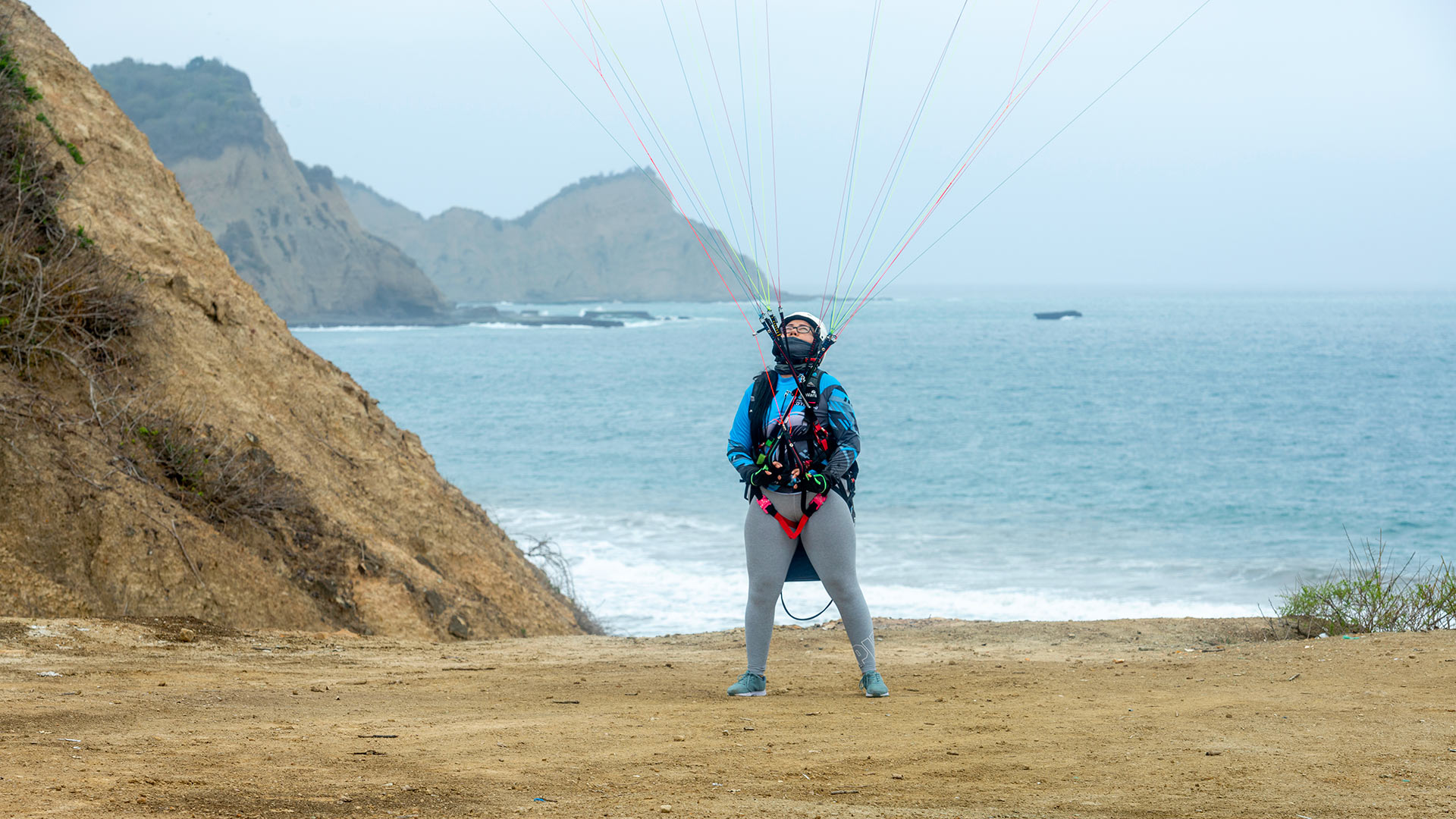 Without warning, Gabriela runs and throws herself into the void. She disappears for a moment, but quickly rises, gathering momentum as her glider sets out over the ocean. 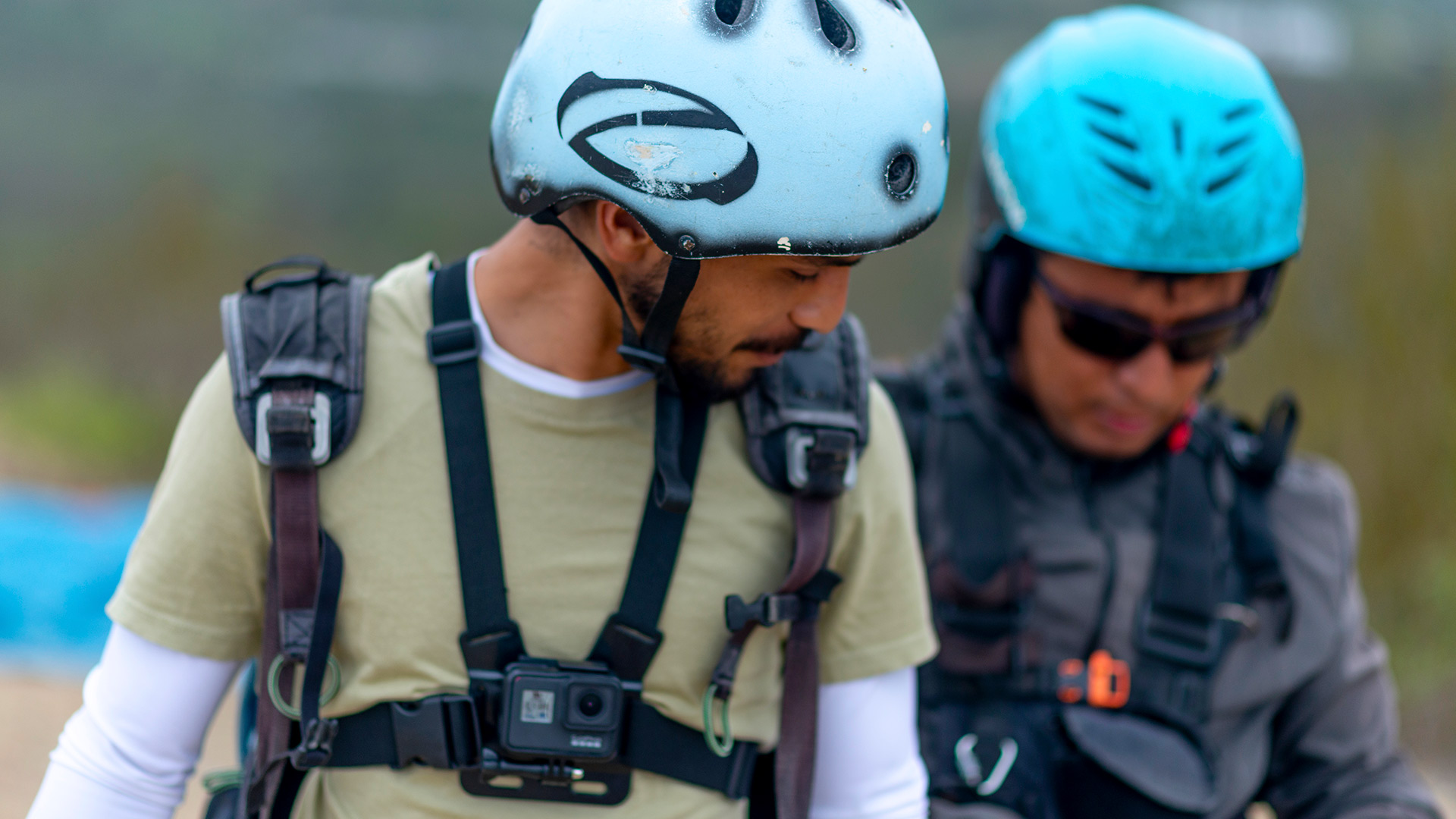 “Now, do you want to try?” Jorge asks me. It seems impossible for me to even conceive of the idea of ​​flying in such a majestic setting without even having tried it before, but my immediate answer is a resounding yes.

Helmet, sail, harness, my camera in hand… we’re ready for take-off. Engulfed by the wind, I hear a scream: “on the count of three, we’re off.” I let myself be taken away by the impulse; I lift my feet and, like a plane taking off, I bid farewell to my footing in an instant. There are no more doubts, only the sway of the wind, the most beautiful view of the ocean, the town Salango and its island. 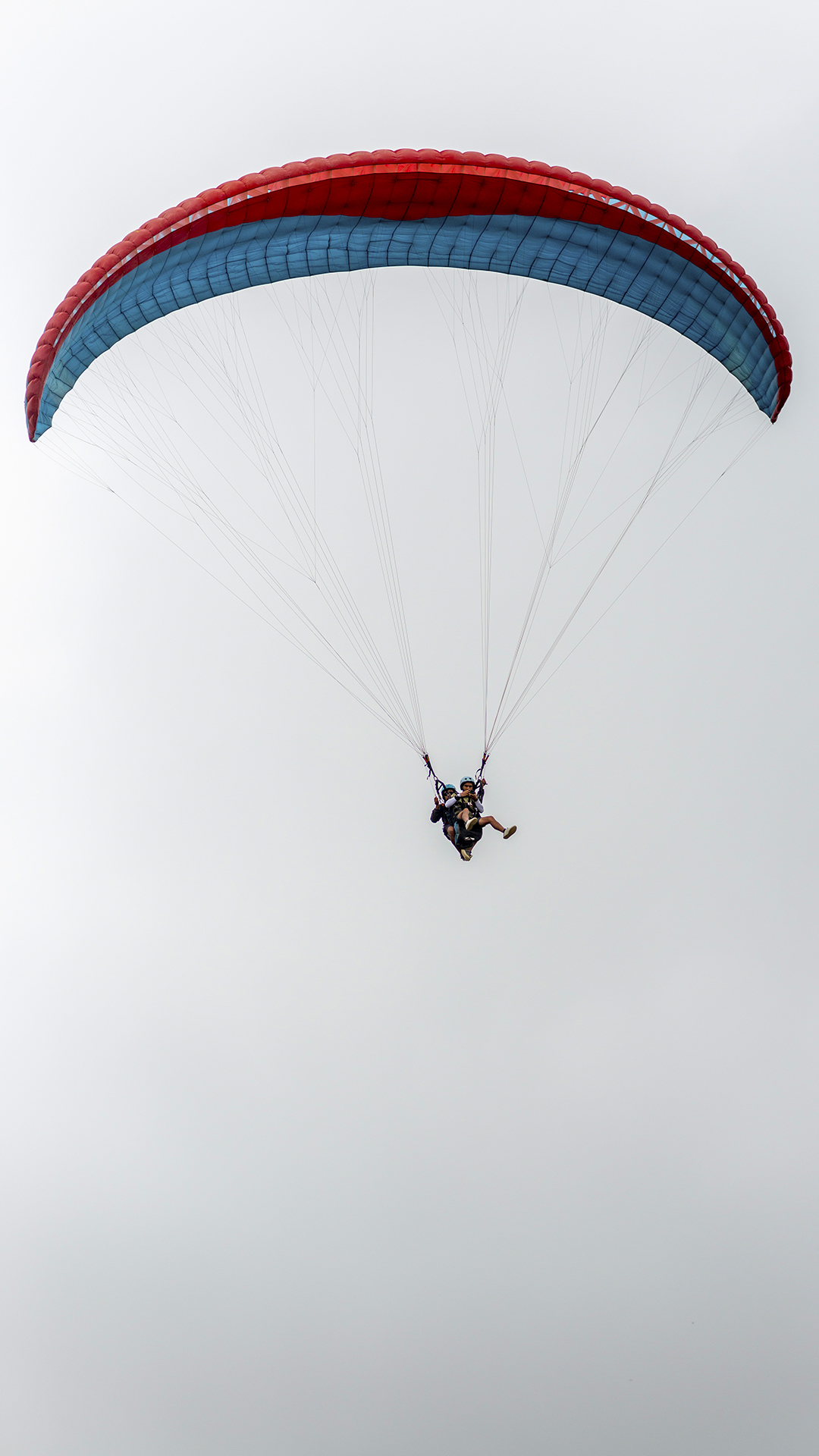 Every movement, no matter how subtle, is controlled by the wind. This great force of nature is actually what pilots the vehicle through the air. Meanwhile, Jorge focuses on riding the gusts that allow us to gain altitude. “You could stay up here for over five hours, but, don’t worry, this’ll be shorter,” he jokes.

After a few turns, we descend back into Piqueros, as the ocean splashes against the rocks… Now I understand the meaning of Gabriela’s words: “indescribable”.