At the bottom of the rolling valley lies the village, a hamlet of huts where the group will camp for the night: Guambaine. The view stretches endlessly, the horizon extending behind a succession of green and blue hills spread out beneath a purple sky and the rising mist… The riders are in awe. They bring their horses to a halt, dismount, and feel on top of the world.

Gabriel Espinosa leads all the groups. He has done so since he began to organize them decades ago. When I ask him if he ever lets someone else replace him, he answers quickly: “No… as long as I can do the trips, I’ll keep on riding” … These horseback journeys define him. He actually calls them that: “journeys”, rather than “trips” or “excursions”. Journeys, you see, “can just go on and on.” A journey is certainly more than a mere ride, which most don’t consider much more than a quick trot round the grounds. From his tourism operation at Hacienda La Alegría, Gabriel has created something much more ambitious: the perfect excuse to make Ecuador into one long bridle path, his infinite horseback journey that never ends. 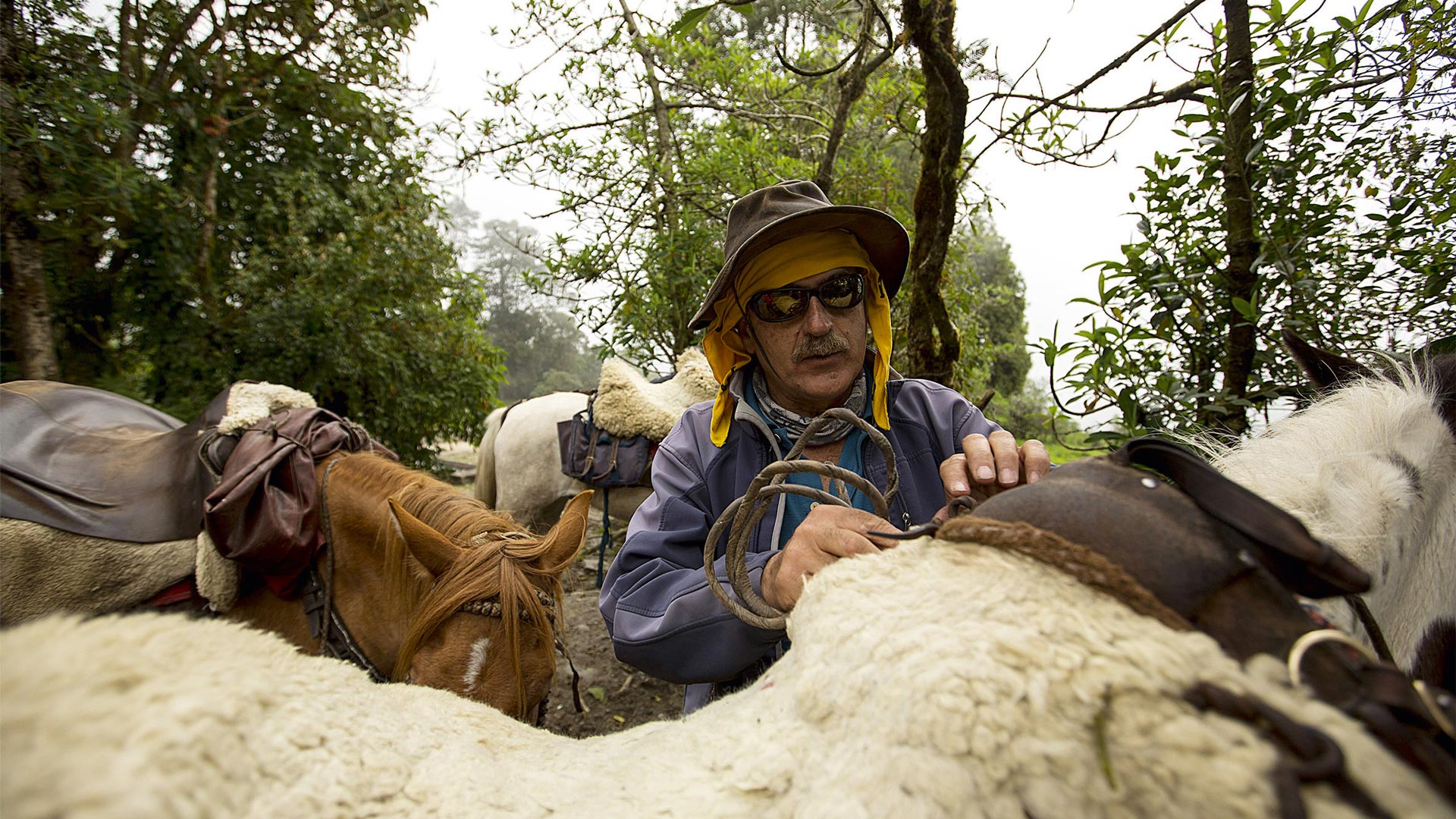 The Andes never end… No matter how much one travels across or over them, there are always unexplored corners, yet more folds in the mountains that one decides to leave for a future expedition. Gabriel has already crossed the entire country from Carchi to Macará: “In Ecuador, you can take your horse wherever you want. If you want to cross from one end of the country to the other, you can do it and no one will stop you. It’s one of the rare countries where this is possible.” Combined with being able to discover not only one mountain range, but two – the eastern and the western Andean cordilleras – with an amazing inter-Andean valley in-between to boot, Ecuador is one-in-a-million among the world’s horseback-riding destinations. These mountain ranges are Nature’s realm, sparsely populated, wild. The landscapes and experiences never cease to amaze the rider, as they travel through the country’s altitudinal ranges: on a single day, one can travel from cold páramo to humid cloudforests…

One of the trips that most inspires him is, of course, the hardest one… it crosses the two cordilleras, christened Wild Andes: twelve days, ten of which on horseback, riding eight hours a day (and sometimes more). A true journey, if ever there was one.

Guambaine awaits on the eighth day. After winding up and down ranges, avoiding paved roads, skirting mountains, towns and cities, climbing Corazón volcano, descending into the cloud forests of Bombolí, joining the road to Sigchos and passing by the turquoise crater of Quilotoa, Guambaine is the first camping site of the trip. For the inhabitants of this tiny hamlet, the nearest town is more than three hours’ away. Then, the riders head up to the páramo and find their way over to the Camino de Flores (Flores’ road), one of the many historical projects that sought to unite the coast with the Andes that today have vanished from national memory and serve as fantastic side-routes of exploration for the adventurous. 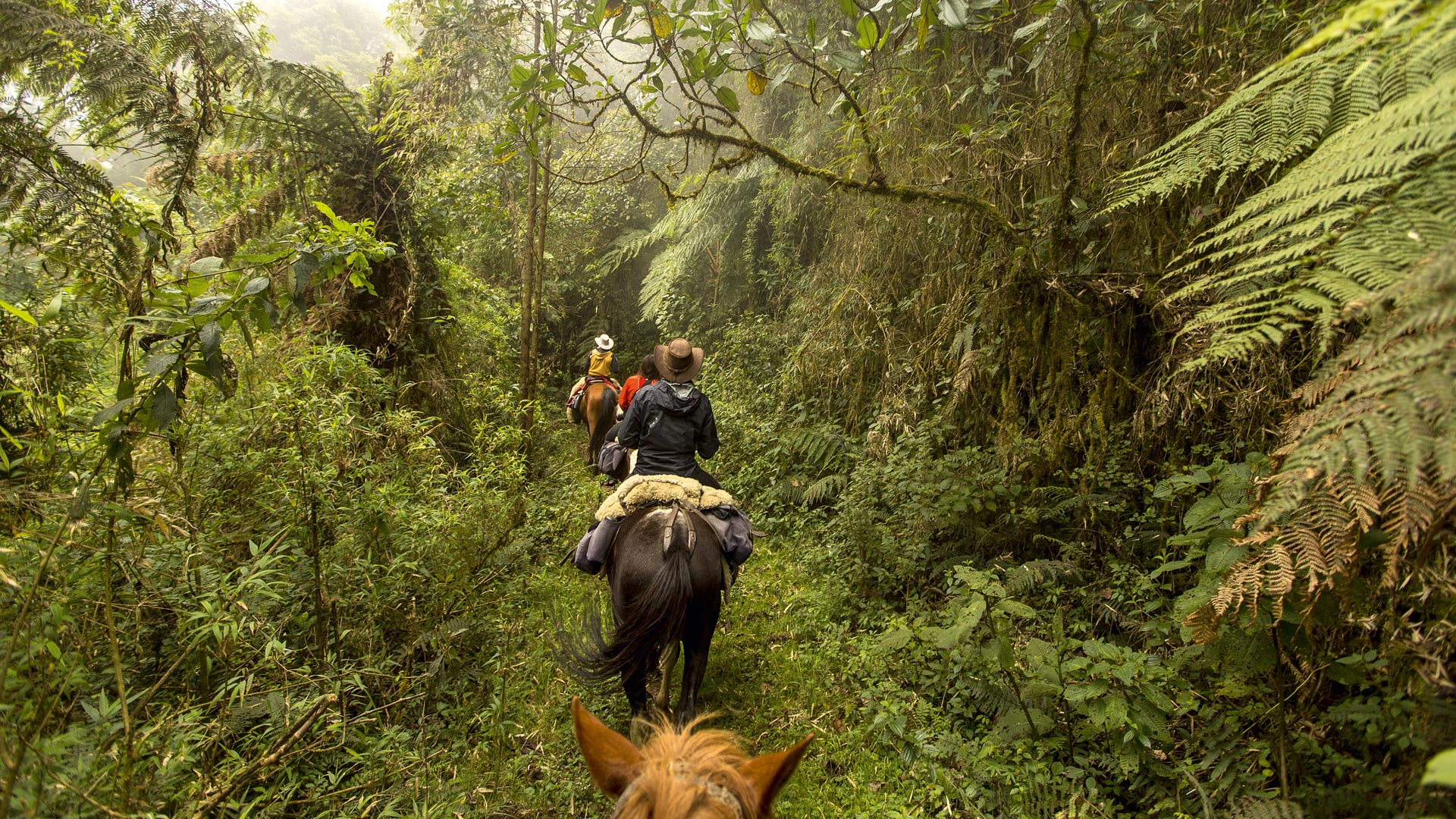 Day ten is an epic passage in between the dazzling Carhuairazo and Chimborazo volcanos, a parting of the mountains that the horses cross like heralds of the dawn. The odyssey ends on the other Andean cordillera, the eastern one, where fuming Tungurahua rises above the small town of Baños.

Gabriel is passionate about his vision of travel. He’s convinced horseback riding should be, in essence, a journey. Horses are not vehicles, they are interpreters. They are companions, guides, helpers, experts… They cross the world they know and love so well, knowing themselves and their limits equally well. The rider must simply trust in the horse’s instinct, as together they traverse this world of mountains.