Riobamba: A city among mountains

The man who rides through forested lands will rush to a city, says Italo Calvino in Invisible Cities. Similarly, while walking in Riobamba city, the desire to rush to its mountains — Chimborazo, Carihuairazo, El Altar, Tungurahua, Cubillin, or Quilimas — is inevitable. This provincial town may present fine 19th century architecture, but it is enveloped in fumaroles and deeply linked to its rural reality. Freezing páramo winds seep into the cracks of every historic house, making nature’s presence felt along every street.

Riobamba historian and native Franklin Cepeda Astudillo gives us one of the keys so that we may start to understand this place: this is a traditional place, but with pretensions to modernity.

We begin our tour at Avenida Daniel Leon Borja: an eclectic street filled with restaurants and bars, whose 20 blocks once represented the entire length of the city. It is now established as the entertainment hub of the city and ending your walk here at Rayuela — a nice place to grab a drink, with live music on Fridays — will only enhance your experience.

Another good starting place for a stroll around town is Guayaquil Park, a well thought out family-friendly space, with a lagoon, a section that celebrates Ecuador’s “four worlds,” lots of grassy areas, and the curious “zebra cow” by Ecuadorian artist Endara Crow. This is the gateway to a city that one must understand was completely destroyed by an earthquake in 1797 and relocated two years later on old haciendas (estates) like Quinta Concepción, on which this very park sits. That’s another key to Riobamba: it is relatively new and constantly changing.

From here you can make out the stadium: the first of its kind in the country. It was built for the 1926 Olympics, where, for the first time in Ecuador’s history, a crowd of over 10,000 people gathered in one place, something unthinkable at the time. Some of the stone walls of the original construction are still standing. If the thought of athletics at this altitude makes you exhausted, we suggest that you stop for a classic treat, a palanqueta de mortadela, made with local butter, at one of La Vienesa’s two locales (one on calle Larrea, the other on Daniel León). 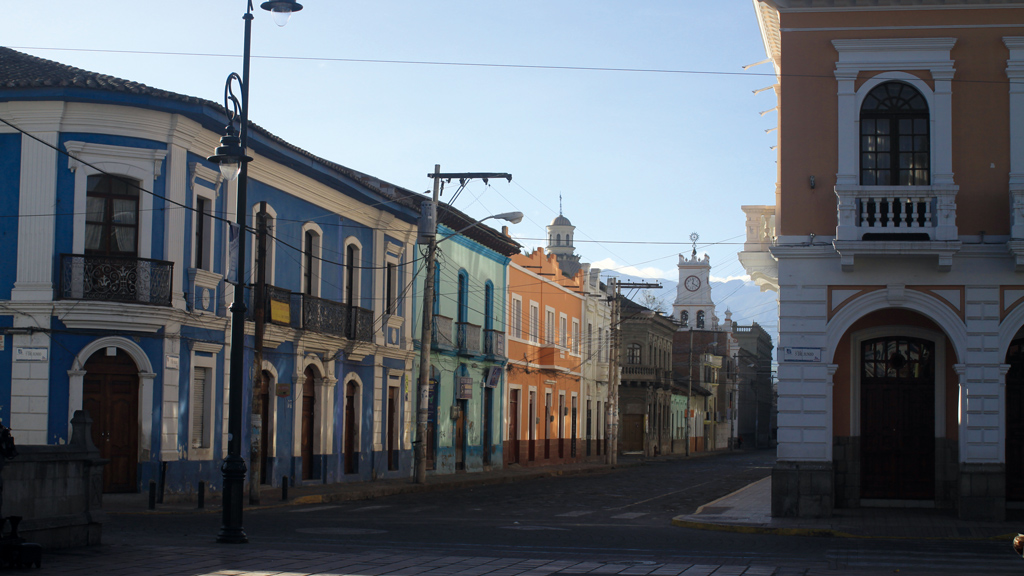 The first light hits a mosaic of walls in the Historic Center.

The next landmark is the train station, on Avenida 10 de Agosto. At a time when the distance between Quito and Guayaquil meant 15 days travel (and that’s when it didn’t rain!), the train obliterated space-time conceptions by making the same trajectory a mere 14 hours. Riobamba was excluded from Ecuador’s first train route, but in 1924 a direct line arrived to this very station and with it, some of the first cultural exchanges: fragrant fruits of the tropics for the astonishing views of Mount Chimborazo and its imposing 6,268 meter-high summit.

One of the striking architectural features of Riobamba is how low all the buildings are (out of fears of another earthquake), and one of the striking human features is how slow the pace of life is; resisting the frenzied ways of other large cities, people here still stop to greet one another, joke around and pat each other on the shoulder.

One noteworthy, eclectic building appears 19 suddenly, the Pedro Vicente Maldonado School. Named in memory of the famous 18th century geographer who surprised the members of the French geodesic mission with his verve and knowledge, Maldonado was a Riobamba native. Some of the street names give away how important the original Riobamba was to the Spaniards. Calle de la Primera Constituyente is one of them, honoring the nation’s first constituent assembly — the country was founded here. But that is only one of the many “firsts” for Ecuador that took place in Riobamba, which earned the city its moniker, the “City of Firsts”.

One of Riobamba’s loveliest features is its parks 2 and plazas. In addition to Parque Guayaquil, check out the 1913 statue of Neptune in Parque Sucre, made to honor the arrival of drinking water in the city. While Riobamba was not — in this instance — the first place to get drinking water in Ecuador, the statue is a historical place nonetheless, where local indigenous communities have traditionally gathered every Saturday to sell local products (and, they tell us, slaughter their sheep).

Two blocks further down is Maldonado Park, surrounded by beautiful buildings with striking tin roofs. The square is named after the afore- mentioned geographer and his statue rises high on a column with a condor with spread wings at his feet. While the modern government offices and city hall are here, they are overshadowed by the architectural gem that is the Riobamba Cathedral. The attention-grabbing frontispiece of the cathedral was painstakingly built from the recovered pieces from the original Baroque church, which was razed by the earthquake. The new city got its old church back thanks to Father José María Freile, who perfectly rebuilt the church in 1835. 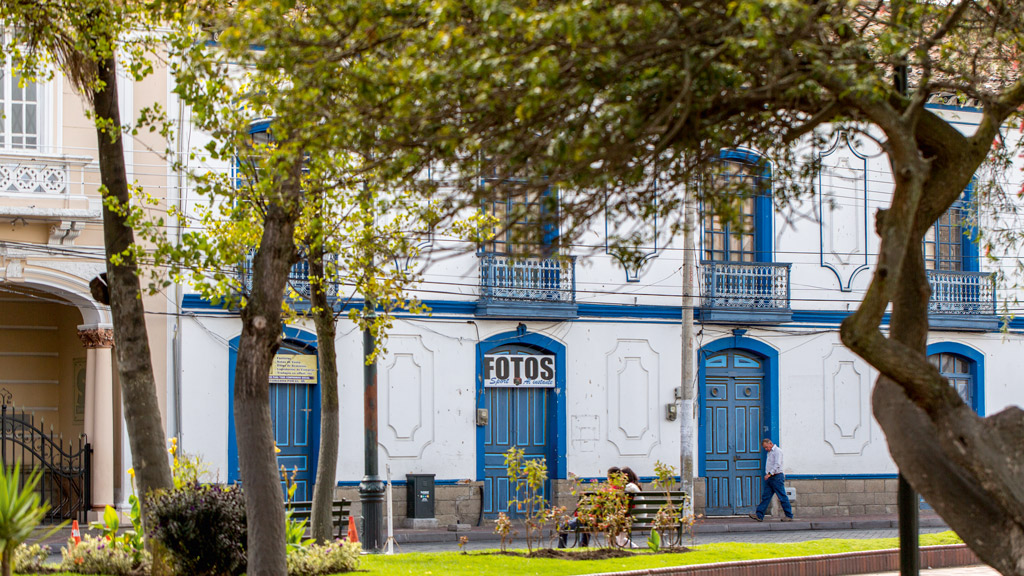 The many parks found in Riobamba are an excellent place to unwind for locals and travelers.

More of Calvino’s words come back to us, about cities being built with patches of other cities. The white limestone of the cathedral should teach us about biblical symbolism, but the building’s mere existence arguably teaches us more about the wonder of a disappeared city, destined only to be understood in fragments.

Inside, you’ll find murals by artist Oswaldo Viteri and another by Nobel Peace Prize winner Aldolfo Perez Esquivel, painted in 1986 in honor of the so-called “Bishop of the Indians,” Monsignor Leonidas Proaño, who fought against fierce opposition for social change throughout the region. In the same Maldonado park lies the chapel of Santa Barbara, the episcopal palace and the cathedral’s museum.

The city offers a couple of other important churches. The neo Gothic La Concepción is located on Calle Jose Orozco. Also known as the red church, its arched windows and stained glass stand out, as does the painting of Our Lord of Justice, which lies next to the 17 cloister (p.40), where locals come to pray and touch the unrestricted canvas depicting Jesus Christ. To one side, you’ll also find the turnstile to the cloister, where a vast variety of healing products made by the nuns are sold. Don’t miss the “chola” sweet bread rolls made with melted brown sugar in the middle. Attached to this building is the Museo de las Conceptas cloister museum, which houses a phenomenal collection of religious treasures.

Like the church, the square outside is also colloquially called the “red square,” possibly thanks to the church’s brick façade. Notice the four-leaf clover motifs and rosettes carved onto the church. Try to come to the square on a Saturday, when it explodes with indigenous handicrafts and colors. It is usually rural folk who come to shop: it is a wonder how few tourists know about this compared with its more famous cousin in Otavalo. Unusual sights include almost-extinct professions, such as “hemmers,” who come out with their sewing machines ready to repair garments, and artisans spinning wool. Do not leave without tasting the tradi- tional food cooked on site. 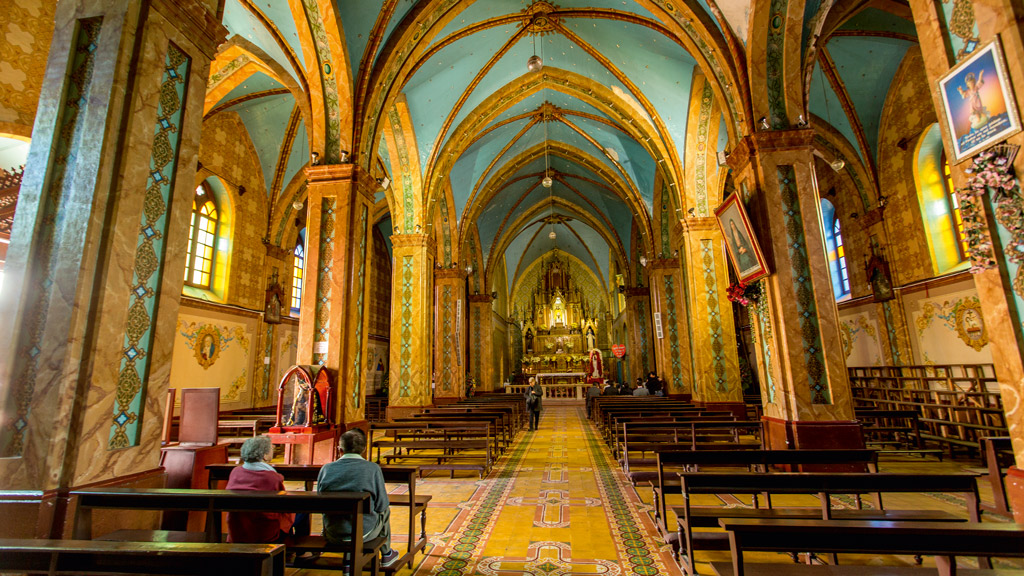 Las Conceptas Church offers a place to reflect and pray.

Two blocks away, San Alfonso church on Argentinos 12 offers an interesting experience. Father Luis is one of the French priests living here. He cheerfully showed us around the unique building with its conical wooden towers. The construction is worn, but it’s fascinating grounds include a vast garden, where you’ll find grapes, blackberries, passion fruit, peaches and a lot of alfalfa, because the place also has cows — in the middle of city! Although the woodwork is less striking than that of Spanish churches, the walk takes us back to other times and sensibilities.

Another religious building of note is the Basilica del Sagrado Corazón de Jesús at the corner of De Velasco and Benalcázar. It was built with stones from the Gatazo mines, which are best displayed in its high central dome. The Basilica sits on Parque Libertad, which has a monument to Juan de Velasco, considered the “first historian” of the then Real Audiencia de Quito.

Make sure to drop by La Merced market for lunch. Bynoon, the hornados are ready. These hogroasts are lovingly and secretively prepared: whole pigs are roasted in wood ovens for hours to achieve the perfect crackling. Another secret is the marinade; a mysterious and delicious balance of garlic, cumin, annatto, sesame seeds and nutmeg. The most exciting part of all is getting to experience the selling process itself: a cacophony of greetings to every customer as the cooks give away free samples as visitors pass by. The dish is usually accompanied with classic llapingacho potato patties and a delicious fruit juice some say is made out of ice brought directly from the mountain glacier at Chimborazo. 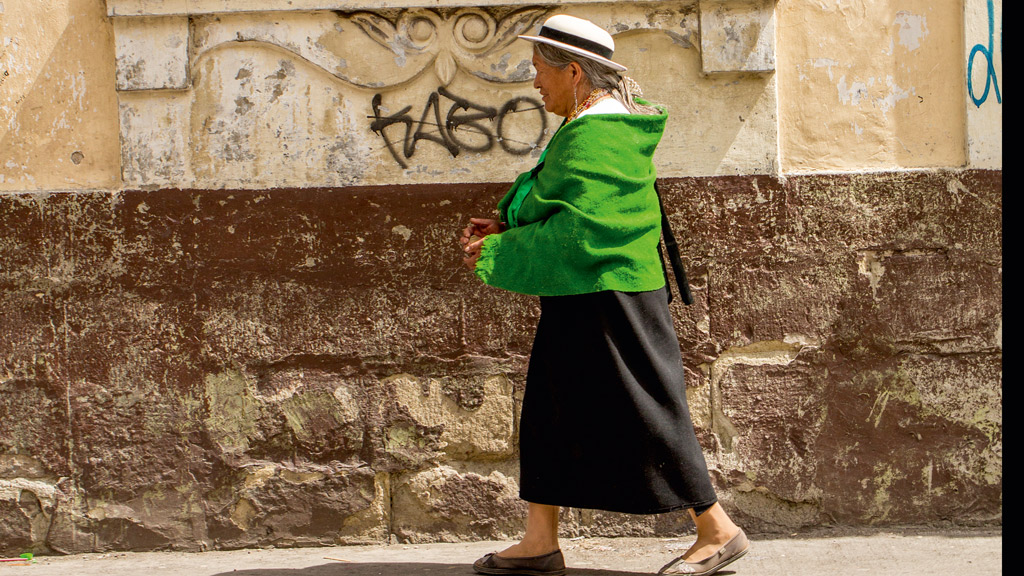 Without straying far you can see the landmark Chimborazo Banking Society building, which currently serves as the post office (at calles 10 de agosto and Espejo): a spectacular construction that evokes Riobamba’s boom years.

One of the final keys to understanding Riobamba is the miraculous way you can walk through this city without the need to look at your watch. This offers travelers the potential to really take in their surroundings, allowing themselves to be surprised by small details they would not normally notice. But even with all these tools to understand the city, there’s one thing that obliterates them all, beyond the people, beyond the architecture and beyond the pleasant place the two create: the glory of Mount Chimborazo. Riobamba is protected by mountains that contain ancient secrets. While we have immensely enjoyed the city, as we admire the spectacular landscape we have a collective thought: the man who rides through cities can always rush out to be among the mountains.