Reap the blessings of the sea

Months prior, the representatives of the militia of the four constitutional governments of the Republic of God set into motion the “protocol”, which has been practiced for well over twenty years. A sergeant and a soldier walk door-to-door from Crucita, Los Ranchos, Las Gilses, San Jacinto, and other nearby communities of Manabí’s coastline…

One carries an urn with Saint Peter and Saint Paul and the other hides a snake, a real live boa constrictor, that will bring bad luck to those who turn their backs on the invitation of contributing money, help or their presence on the day in which the fishermen of Los Arenales give thanks for the bountiful fishing and the favors received of health and prosperity during the year.

Each government creates their committee and begins to weave their celebration following a sequence of tasks and hierarchies not unlike those of a cabinet. The names of the president, vice-president and ministers of the governments of Peter, Paul, Blacks and Whites – not to be associated with racial distinctions – are embroidered in Gothic letters on the official bands. There are ministries of culture, sports and finance, which organize awareness events with schools, family activities and the year’s budget, respectively. 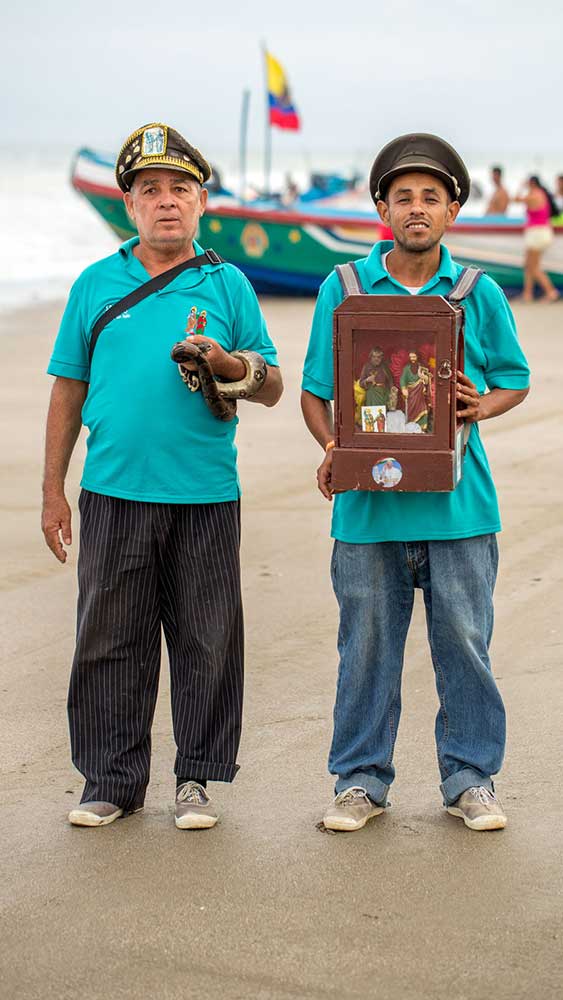 Four icons, two of Saint Peter and two of Saint Paul, are taken by car to the town of San Jacinto, where they will wait for the villagers to pick them up during a spectacular nautical procession.

The night before, the town begins to stir. Stands pop up and create a street fair with foosball tables, carousels, food and street games… of course, the images of the saints are present everywhere, emblazoned on hats, walls, cars, boats, signs, and on any other canvas where one’s faith and devotion to the apostles can be signaled.

At dawn, boats and yachts are decorated with colorful balloons, ribbons, powerful sound equipment and flags that will distinguish each government during the ocean parade. In the houses of the presidents, kitchens are lit and dishes of arroz con pollo (a stir-fry of colored rice, chicken and vegetables), local Manabí specialties and other festivity sweets are made for the participants onboard. Beginning in the morning, small fishing boats transport speakers, food, liquor (especially whisky and beer), and the guests who will partake in this unique, open-ocean religious procession: over one hundred yachts and over thirty fishing boats.

The party moves to the sea. Whole villages embark, as well as the sergeants, the ministers, the presidents… and the boa constrictor. 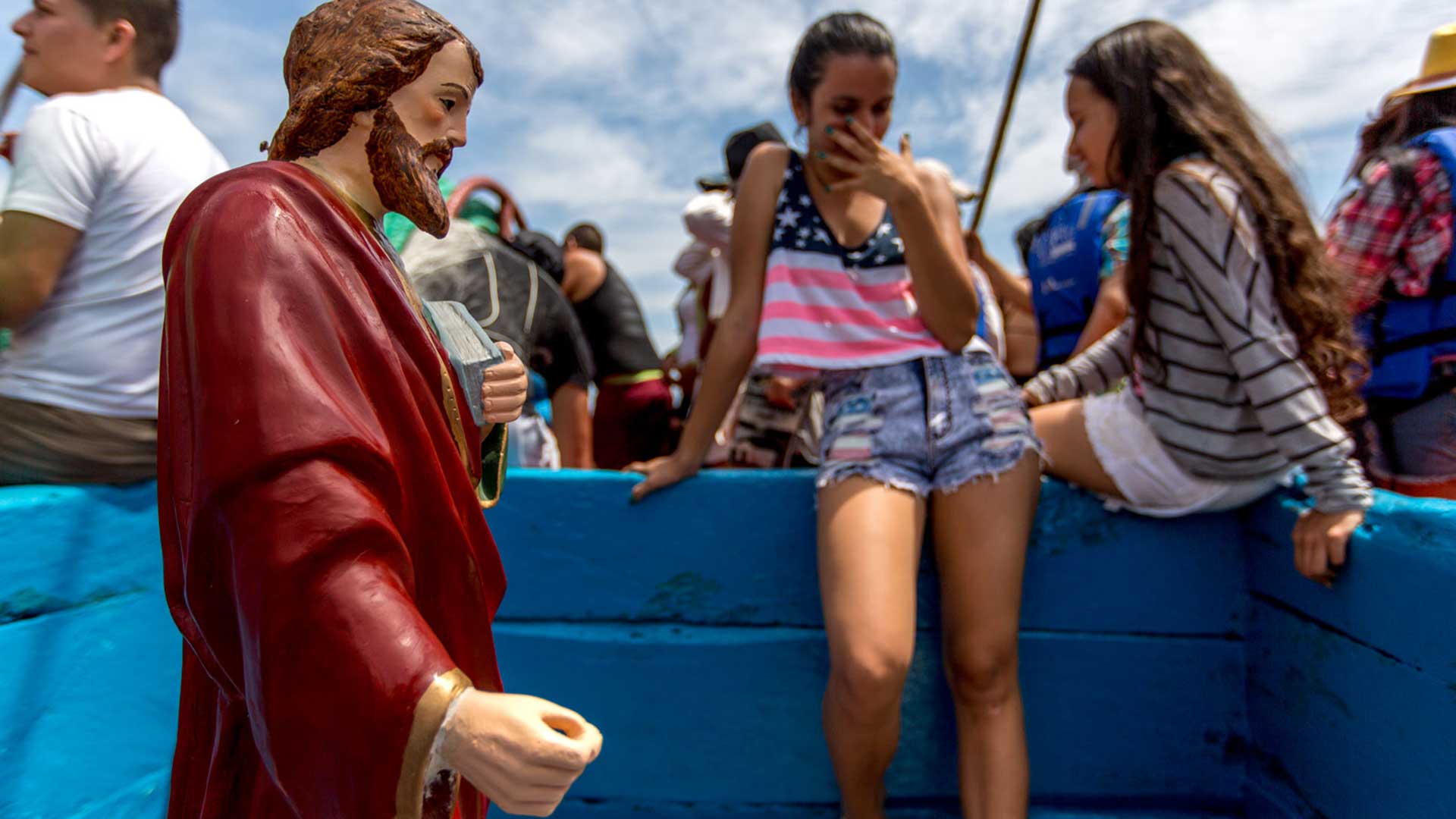 Without a real musical tradition, it is the popular hits and the taste of the DJ that gets everyone dancing. When the saints have finally made their way from San Jacinto to meet with the procession, they are brought, one by one, to each boat. The music stops, as words of respect and prayers are expressed to the icons.

“… We ask our Saint to help,” explains one of the participants… This procession is also an interior voyage. Fishermen and their families will have something specific to ask for this year, like every year, in front of the apostle which has been placed at the very center of the ship. Some may have an opportunity to approach the icon, but it has to also get to the other ships as well, and the smaller fishing boats act as shuttles. Once the saint leaves a boat, the dancing can resume.

Back on the beach, the four figures disembark. Everyone gathers around them as the faithful are allowed a moment to stretch out their hands and touch the images. After tying a note to the cloak of the saint or depositing a coin or two, the devotees take their respective selfie and, in small groups, carry the icons aloft to the church, where they will process the peoples’ wish-lists of the year. For an entire week, masses, serenades, food and dance in honor of the holy apostles will follow, each government arranging each activity. On the final day, the four presidents meet and, holding their government flags, engage in a curious ritual in which they spray perfume on each other. Incoming presidents are also present and assume their authority. They choose their cabinet members and conform their new governments, setting out on a year’s journey of hard work to ensure bountiful fishing and an even better celebration to come, on this special day in which the fishermen ask unto the sea, turning their coastline into a street of honor for San Pedro and San Pablo.