Some of the works are four meters long. They are huge murals that reflect a home that few people could dream of. “My beautiful jungle,” Ramón Piaguaje calls it, my “Eternal Amazon.” “Eternal,” he explains, “because it will remain forever as I have painted it, even if the real jungle is destroyed, even if it will no longer look like what you see in my paintings.”

Yes, the finished works, they are eternal, but the works in progress are eternal as well. For other reasons, of course. Ramón explains: ” you can always add something else to the Amazon.” Some of these unfinished symphonies are already four or five years old.

Eternal Amazon is, in fact, a particular oeuvre that earned Ramón a very important award. It became the representative work of “Our World in the Year 2000”, an exhibition organized by the United Nations to celebrate the millennium. The work ranked first among 22,000 participating pieces from no less than 51 countries. “I toured the world with that painting,” he tells us with his indelible smile. That canvas was literally his magic carpet. He got to know the big cities of Europe. He greeted Kofi Annan and the Prince of Wales. Thousands of people, including presidents, famous artists and diplomats have had the opportunity to stand in front of this great work and explore its most intimate details. 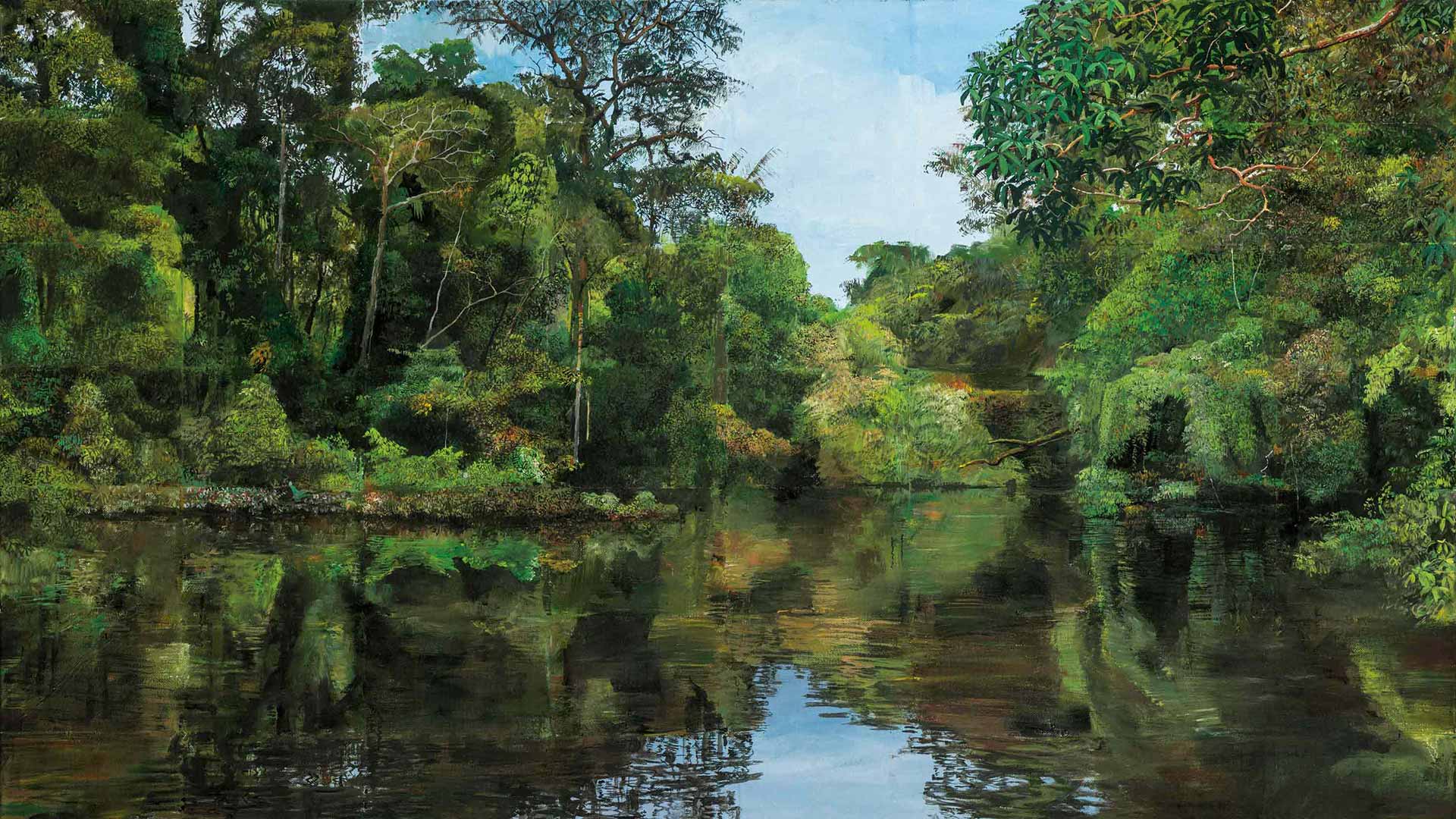 Painting in the jungle

The story of how that work traveled the world goes back to the most remote jungles of our country, in the Cuyabeno National Park. Ramón Piaguaje is Siekopai, or “Secoya,” as his ethnic nationality was once called. His Spanish is rudimentary because he learned it late in life. Half of his family currently lives in what is now Peru, because the War of 1941 left the Seikopae territory divided in two. His father decided to relocate the family to Ecuador and after years of struggling with hostile members of the Siona nation, they were able to find free, undisputed land within the national park.

In the tiny community of San Pablo de Secoyas, more than half a century ago, little Ramón, would use branches he’d find on the ground to draw scenes that surrounded him – a turtle on a log, a large tree, a monkey – on the beaches of nearby rivers: scenes that slowly returned back to the earth in a few hours. Missionary friends of the Seikopai found in him a great talent and gifted the young artist his first colored pencils. He then received oils from another American friend, William Vickers. He mentions that he only took one course in his life, when he shared half an hour with the renowned Quito watercolorist Oswaldo Muñoz Mariño. In that short timeframe, Mariño taught him all he could teach him about mixing colors and paints. The rest was self-taught work for decades. 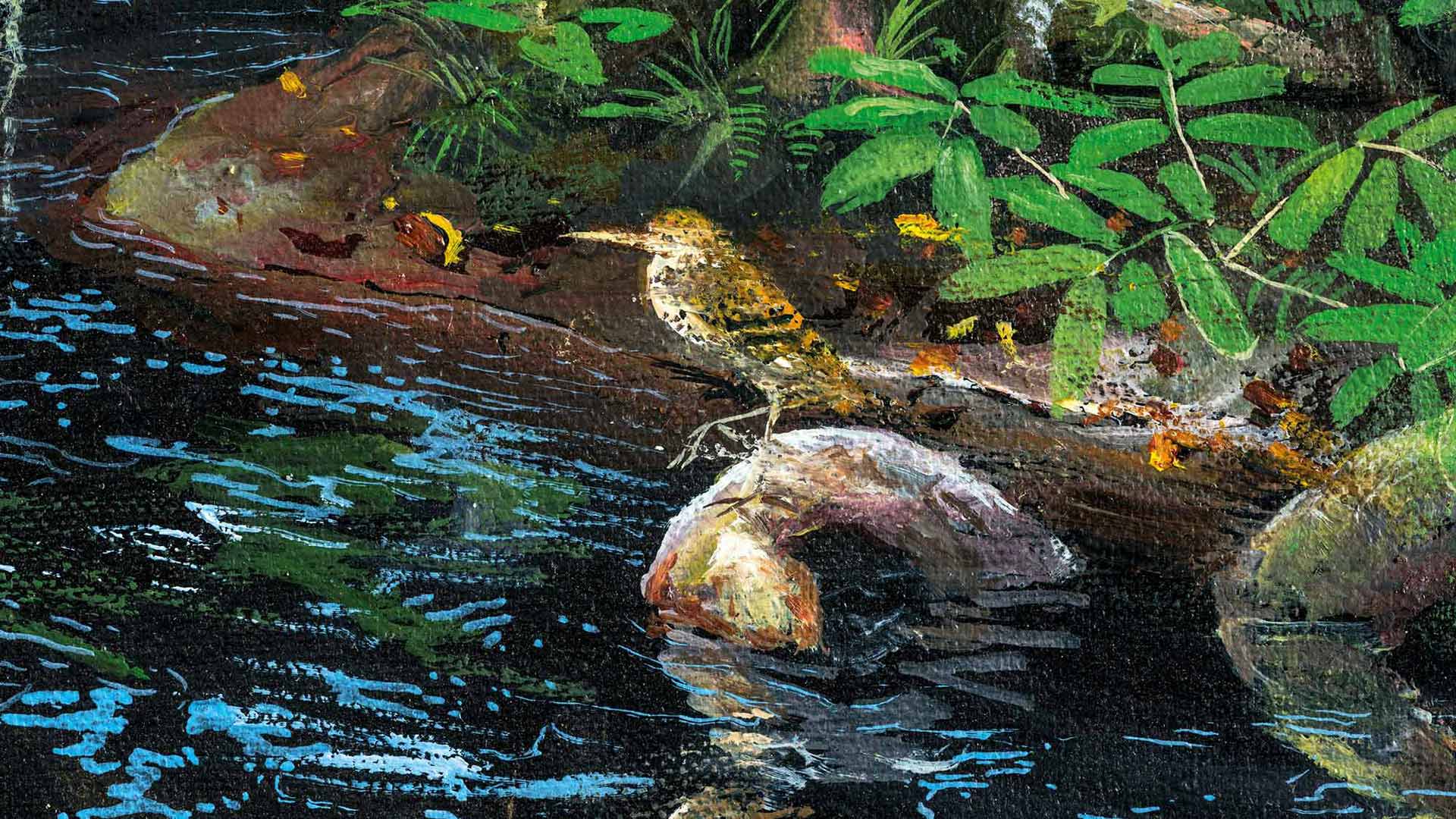 “The detailed world of the Amazon,” says Ramón, “deserves the detail I put into my paintings.” That detail is also his way of trying to capture what he remembers from his jungle scenes, because his workshop is in Quito. He travels back home when he needs to breathe some fresh rainforest air, which happens every so often, because, after all, Ramón will always be a fish out of the water in any city.

Many of his works are, in fact, the result of a specific detail, represented, in many situations, by a single animal. The entire remaining canvas, sometimes several meters long, is created around this detail, giving a “home” to a monkey, a heron, an anaconda crossing a river, or two macaws fighting. These green universes, so colorful and vivid, provide shelter to the protagonist of each painting. And those protagonists exist and shine as the smallest part of that eternal nature they share with the world. The implications of this premise are as grand as the works themselves, going beyond words to reflect the importance of their existence within the overwhelming network of nature that only a place like the Amazon can reveal. The smallest element belongs to the most immense, and conversely, the immense belongs to something as seemingly minute as the smallest detail.