Quito Light of the Americas

Why do we call Quito “the Light of the Americas”?

Following his visit to Quito in 1807, Chilean priest Camilo Henríquez became the first person to refer to Quito as the “Light of the Americas”. He would subsequently place a plaque with this very phrase in his native city of Valparaíso, Chile.

Apparently, the revolutionary project was already alive in the bowels of Mount Pichincha years before August 10, 1809 (the date of South America’s first “Declaration of Independence”). We must remember that Quito was a secluded city, officially governed by the viceroys of Lima and Santa Fe, but abandoned to its own fate.

According to former Quito mayor Paco Moncayo, the fact that the ‘light’ of freedom shined here first and not in places connected by sea to the revolutionary world of the late eighteenth century, was “simply because Quito’s solitude allowed it to dream.”

There were many reasons why Quito felt the need to separate from Spain, but the famous “Cry for Independence”, which created an autonomous Junta Soberana de Quito (Sovereign Assembly), would not be sustained for long.

Such was the audacity of Quito’s Colonial heroes, both Santa Fe and Lima sent ‘pacifying troops’ to quell the rebellion. It would be the latter who, on August 2, 1810, provoked one of the most gruesome mass murders in the history of Ecuador: the Limeños looted the city and killed over 300 people, throwing a blanket of deep despair over the city for years to come. 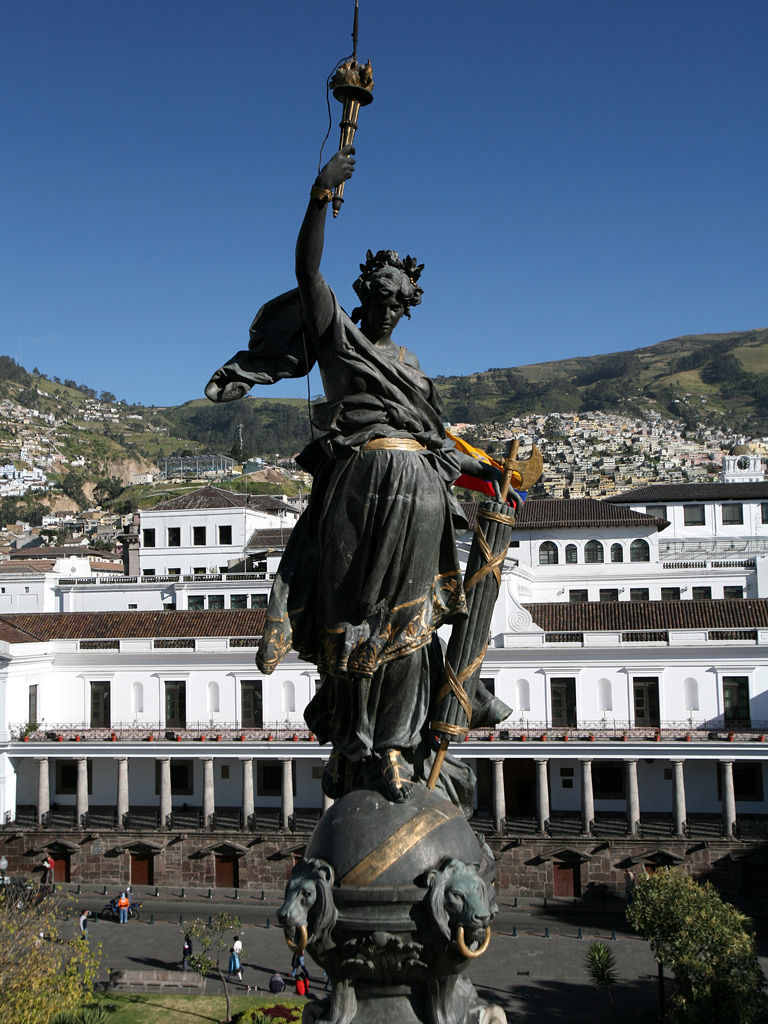 It came as a surprise when citizens Ante and Aguirre knocked on the door of the Palace at an unpleasantly early hour on August 10th, 1809, with a letter in hand. It was too early for letters, said the guards. But Ante insisted.

“It’s from the Junta Soberana”. The what? No-one had ever heard of such an entity. “To the ex-President of Quito

,“ read the document, “we have the honor of announcing that the functions of the members of the old government have ceased. God preserve your lordship many years.”

This was Quito’s “farewell to colonial life” manifesto.

A seemingly-simple maneuver, in fact. Making the most of Napoleon’s kidnapping of Spain’s King Fernando in 1808, this deft group of Quito lawyers figured they no longer owed allegiance to the Crown.

Those involved were murdered a year later in the August 2 massacre (which took place in today’s Centro Cultural Metropolitano), but what that letter spawned was unstoppable: the Independence of the entire continent.

Ecuadorians have continued to repeat the custom, in different ways, of course, but at the exact same place, telling many a high official he’s been dismissed.

Humboldt to the rescue

Alexander von Humboldt and Aimé Bompland had arrived back in 1802.

Some regard him as an instigator of the Independence movement, infusing the ideas of the Enlightenment into the isolated society of highbrow Quiteños. Humboldt took to the affection of his hosts, especially of one Carlos Montúfar, whom he ended up taking along with him on his nature expeditions across the continent.

The friendship between them (and the world tour that ensued, during which they were able to meet historic figures like Thomas Jefferson) would take Montúfar to Europe to participate in the War of Spanish Independence against Napoleon.

A flawless military campaign earned him the respect of the Spanish Crown and he was given the title of Regional Commissioner, sent back to Ecuador to appease the Quiteños’ 1809 revolt, in which his own father, Juan Pío Montúfar, was involved. Unfortunately, he got to Quito too late, and the carnage of August 2, 1810, had already taken place.

Appalled by the fate of his native city (his father’s life was, thankfully, spared), he made use of his royal title to form a new governing board that later declared the territory as a sovereign ‘State of Quito’, a political entity with its own independent constitution.

The new leader and those who joined him were, however, out on a limb, and thus defeated shortly. But, as Montúfar was being deported to Spain, he dramatically managed to escape.

He joined the ranks of Simón Bolívar’s army, who appointed him Adjutant General, no less. At the Battle of Cuchilla del Tambo, he fought alongside none other than José Francisco de Caldas. Montúfar’s tragic end would occur shortly after in Buga in modern-day eastern Colombia, where he was shot in the back as traitor to the Crown.

Light at the end of the tunnel

From the State of Quito to the Battle of Pichincha another decade would pass. In 1822, Grand Marshall Antonio José de Sucre finally reached Quito’s fortress – its glorious mountain – and on its very slopes, broke the back of the Spanish army. There is no poetic justice more fitting.

On May 24th, patriot battalions, which included soldiers from Italy, Prussia and England, were able to shed the light of Independence on the city that first lit its powder keg some 13 years before.

The plaque priest Camilo Henríquez placed on the Valparaiso lighthouse had long disappeared. A commission led by General Paco Moncayo set out to Chile in 2008, and, on a bust commemorating the priest who so admired the determination of Quito, replaced the historic words: “Quito, Light of America”.