As I write this article (July 2013), roadwork is being conducted on the stretch leading to Quilotoa Crater Lake from Pujilí, just before the town of Zumbahua. Opening the road for traffic can last over two hours. Unfazed by the wait, however, instant two-on-two soccer matches start up, even a car-radio ‘reggaeton’ party gets underway, while local neighbors have figured out a scheme to sell habas and mellocos with salt. The community up at Quilotoa apparently pleaded with the authorities to finish the work in two months. It has already been two years since construction began.

Juan César Umaginga, a kind of founding father of the Quilotoa community, speaks of tourism as the province’s most valuable commodity. “Because of erosion, agriculture won’t guarantee our livelihoods in the future”, he tells me. This is why a spanking arts-and-crafts gallery with parking facilities just opened at Quilotoa several months ago. Juan César himself has his ‘Tigua’ art workshop situated on the path to the crater. It’s the first activity you see at sunrise, as you look through his window:  Juan César at his desk, painting away. Crater lake Quilotoa, of course, is the backbone of all ventures in the area. From its cavity, as native myth ascertains, are borne the gifts of the land… and tourism is, today, the best thing with which it can endow its people. 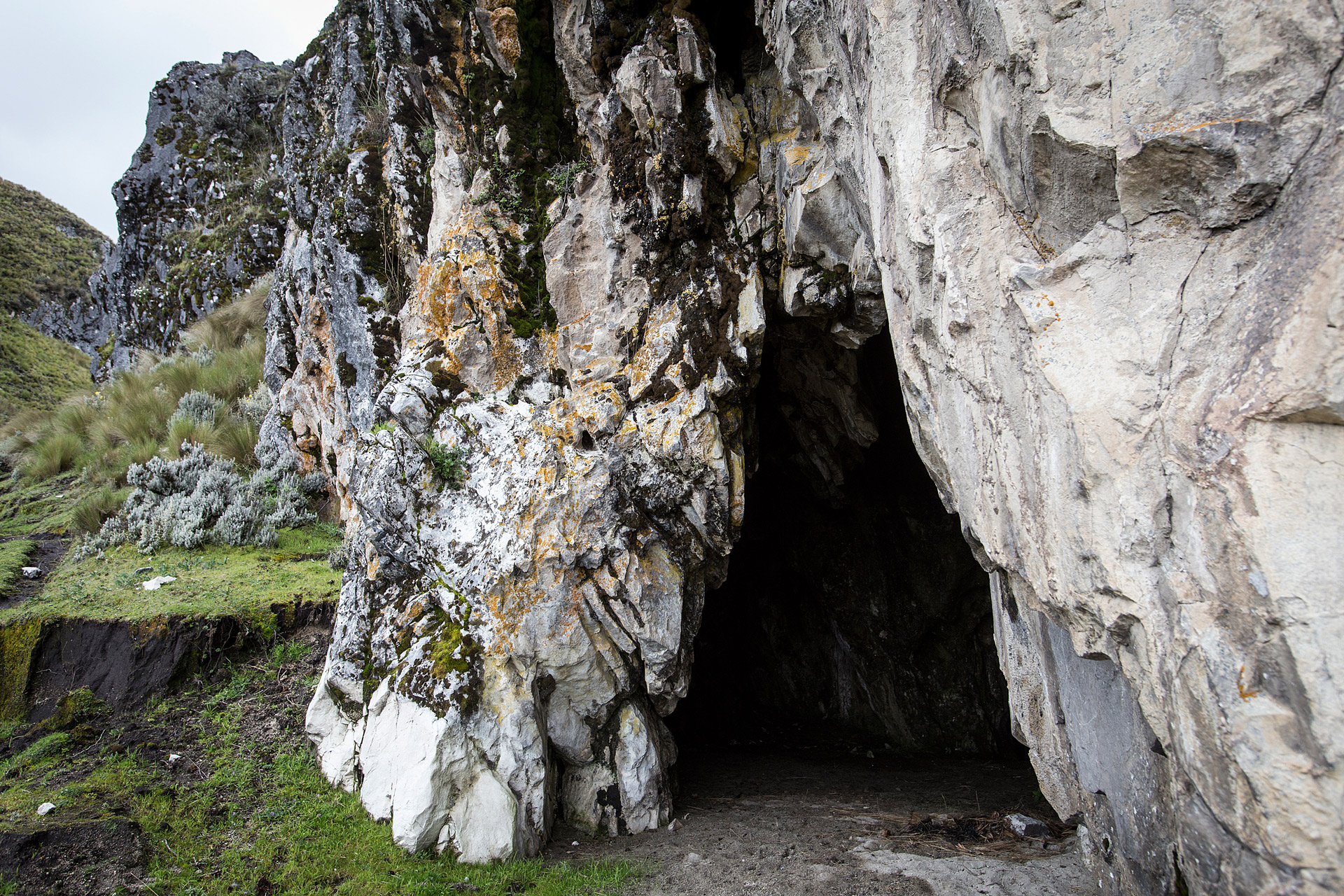 The actual “Quilotoa Loop” is no recent disco­very. It may not feel as mainstream as Cotopaxi, but it has long featured its share of established attractions. It begins in Latacunga, the  provincial capital of Cotopaxi (turn right/west at the main bridge, left at the “triangle”, past a stone church – to your right – and out of the city towards the town of Pujilí).

Pujilí, among other things, boasts a highly ingrained indigenous identity, perhaps best exemplified at Corpus Christi. Pujilí ‘dancers’, dressed in mirror-clad embroidered capes and sky-high headdresses, are known throughout Ecuador as one of the country’s most elaborate characters. The Niño de Isinche, which allegedly was once a huaca, or sacred stone, is today a Jesus Child figurine that faithful residents visit in a nearby town (follow the signs on the main highway). A popular lookout point lies at  Sinchahuasín Hill (over 500 steps up), while the town itself is well known for its pottery (workshop at the neighboring town of La Victo­ria provide much of Quito’s tiles, pots  and vases). Ceramic vases have also been hois­ted up against the town’s lampposts. In general, Pujilí is city-like, but its central square and landscaped gardens, beautiful municipal building and church provide an unmistakable colonial-village feel. Its market days are Wednesdays and Sundays. 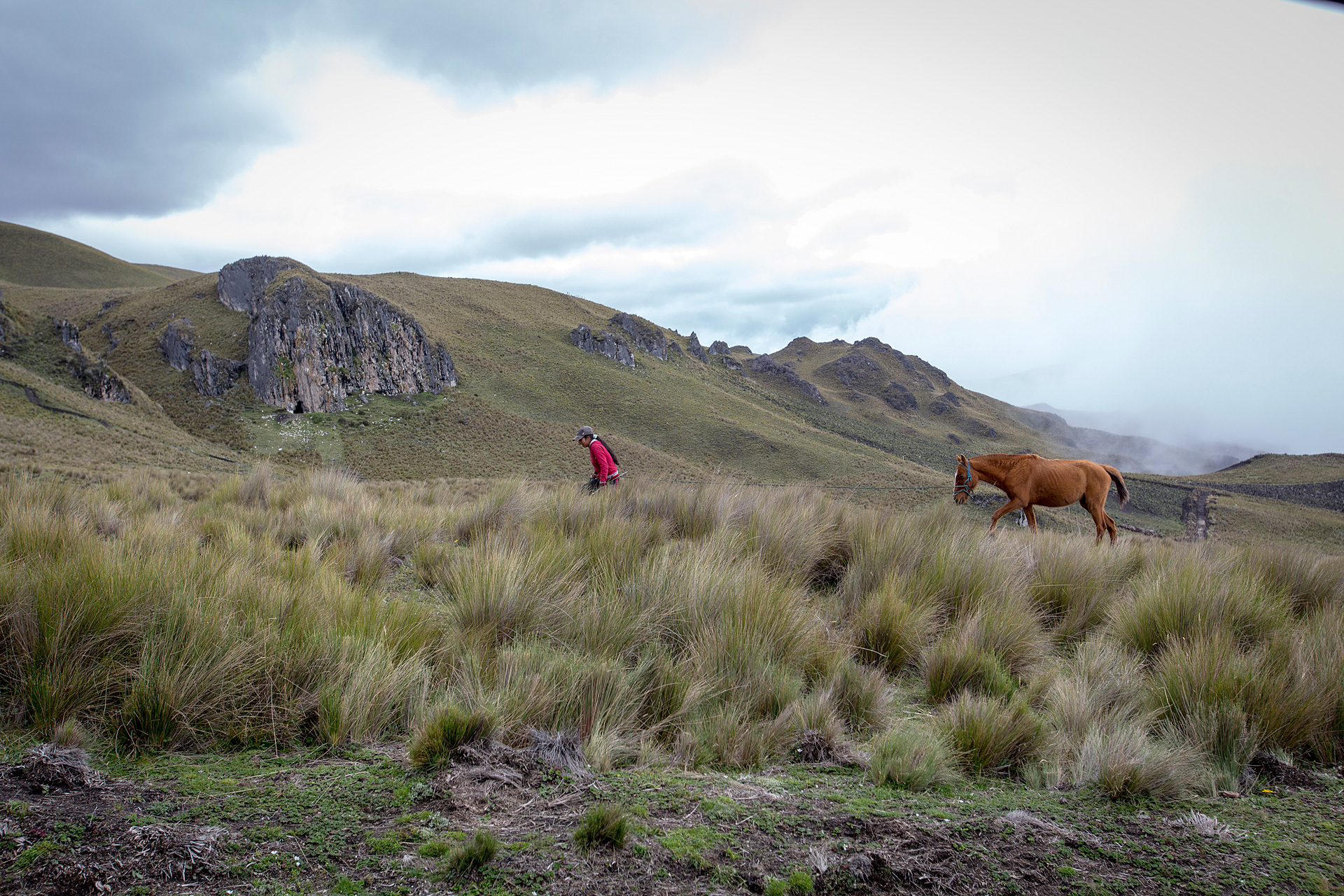 Next begins a steep ascent into near páramo conditions dotted by small thatched-roof huts camouflaged against the sloping grasslands. Poncho-clad natives and their sheep become familiar scenes amid the rolling landscape. Thirty-five kilometers along, you reach Tigua. Sustained immigration into Latacunga has reduced the town to a clutch of houses that ascend the mountain (to the left of the highway) … As you curve around, to your right, you’ll find Julio Toaquiza’s must-see workshop. A cozy overnight can be arranged at Posada de Tigua. Further along, surrounded by photogenic “patchwork” fields, the small town of Zumbahua gets especially loud and colorful on Saturdays at the market square. A short descent across scenic eroded rock formations at the Toachi River Canyon follows, and later the final climb up onto Quilotoa’s craggy crown…

Quilotoa Lake (Princess Toa’s Lake, in fact) is a motionless pool bottled up inside what is believed to be an active volcano. It changes hues as the sun shifts in the sky, turning an almost turquoise green under certain light conditions, bronzy-olive under others. An expansive wooden viewpoint, a community cafeteria and a cement walkway towards the crater are recent additions. You can camp right by the lake and mules and horses offer a ride back up. Places to stay (Chuquiragua, Princesa Toa, Quilotoa Lodge) are humble, but usually feature good beds and decent meals. It can get cold and windy, so dress accordingly! 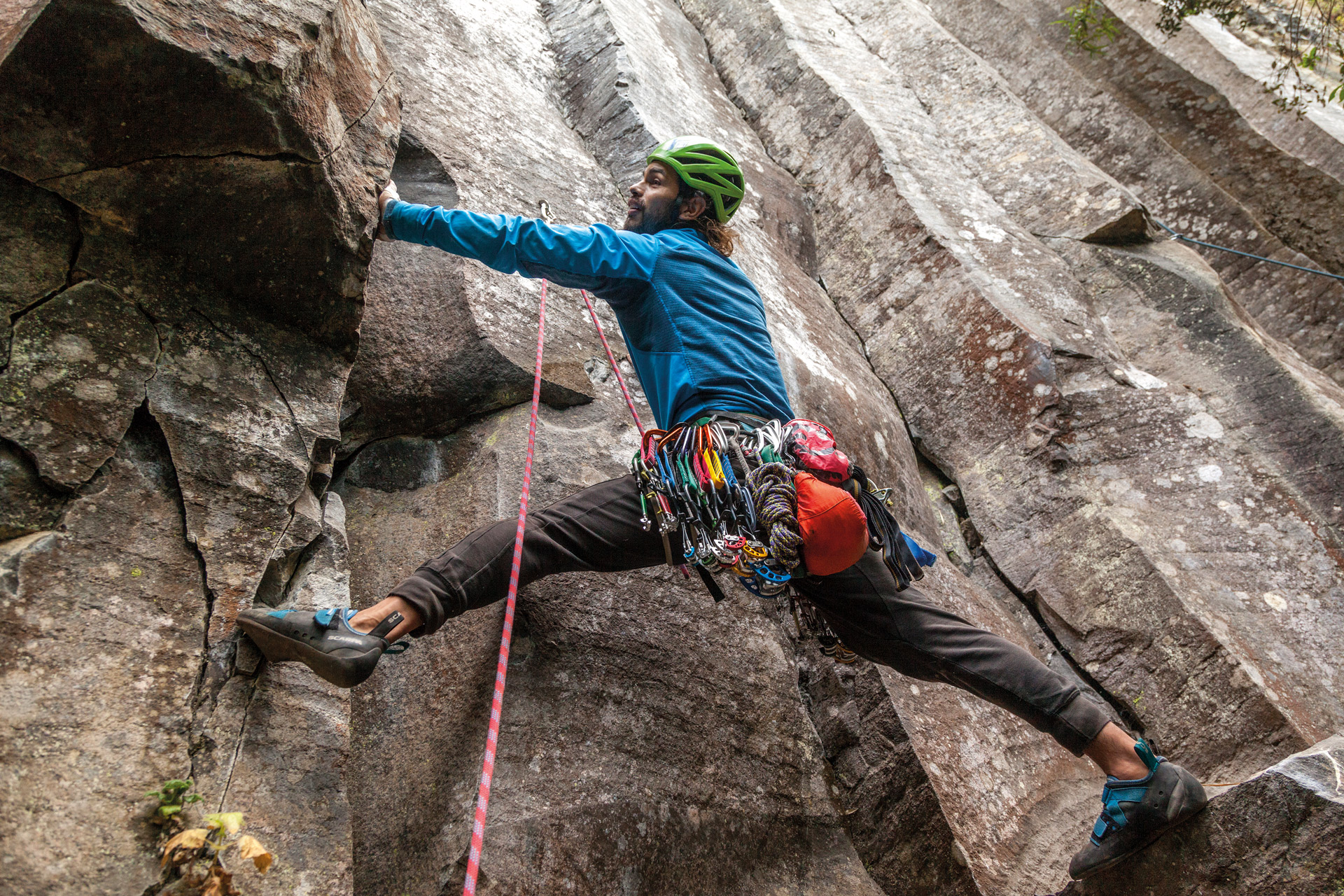 The next town over is Chugchilán, where trendier hostels —Black Sheep Inn, Cloud Forest or Mama Hilda— cluster. A hike to and from Quilotoa begins straight past the crater’s viewpoint (which can continue, past Chugchilán, towards Guangualo and Isinliví). If you are motorized, the road – currently being paved –continues straight past Quilotoa Lodge, a handful of meters before reaching the park’s tollbooth. This road quickly turns to cobblestone, and is still very special indeed, amidst back road farmlands and spectacular panoramic vistas.

Chugchilán also seems to linger in perpetual isolation; its vibe is unexpectedly flavorful, especially during Sunday market day. The pretty location in town is a small “Don Bosco” wood- craft store and Artesanías Workshop, on one side of the church (past the village towards Sigchos, also find a larger Don Bosco warehouse). Closer still to the overgrown town of Sigchos (a good place to refuel, get a snack or stretch your legs at its enclosed plaza and village church), find Hostería San José, a new, comfortable option for Quilotoa ‘loopers’, or Llullu Llama, if you decide to sidetrack to the town of Isinliví. 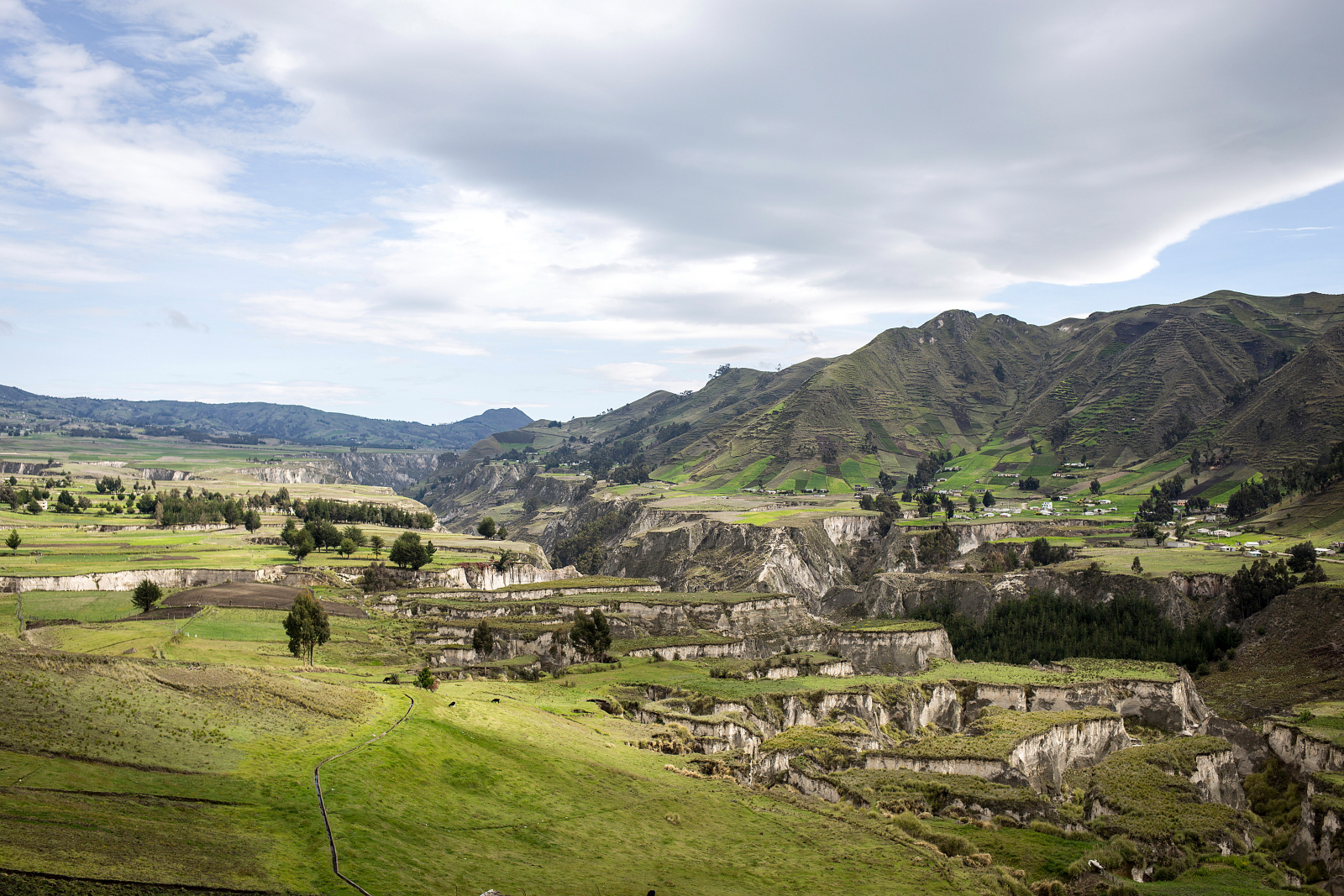 The paved road from Sigchos to Saquilsilí takes about an hour and a half to complete without stopping. It is winding, ever-changing, very beautiful, and passes right in front of a pair of Ecuador’s most underrated peaks, the twin Ilinizas, which, under the right light and weather conditions, boast a most unique snow line, sprinkled like powdered sugar, over their dramatic cliffs.

There are several ways to conclude the Quilotoa loop. At the traffic light at Toacazo, you can either head south to Saquisilí, most interesting during its Thursday market, where outdoor tailors on old sewing machines quickly hem clothes (and many a filer will file knives and hoes) of local customers, and continue back to Latacunga… Or head north, towards Lasso (and Quito or the Cotopaxi National Park), and visit or overnight at one of Ecuador’s most historic residences, La Ciénega.

You may notice the b...
Read more

Carnival in Cuenca i...
Read more