The Galapagos Islands are the last port for the boats that each year cross the Pacific, the greatest of the planet’s oceans, towards French Polynesia. More daring travelers can stick their thumbs out in the port of Santa Cruz, and join a real-life odyssey.

After years of hitching car rides in every part of the world, I decided to take it a step further and hitch a boat ride across the ocean. It sounds crazy, but, as I discovered, thousands of people are traveling this way, sailing on every continent (without any sailing experience!), visiting places you could only reach in your dreams with a mere backpacker’s budget.

The best way to hitch a boat ride, I quickly found out, was logging onto www.findacrew.com, a free website that links boat owners to eligible crew members.

The service responds to any need: many captains travel alone or with their significant others, but need a little help for daily sailing tasks. Searching the site, you find thousands of boats moored across the globe, with information on their routes, crew and what they require on board. Some take you totally free, just asking you to share the food expenses; others ask for a contribution, but usually around $10 to $20 a day.

Ecuador may seem an unattractive destination for this practice, but in fact, it enjoys a privileged location: most vessels that navigate our planet begin in Europe and, once they’ve crossed the Atlantic and sailed the Caribbean, they then cross through the Panama Canal and set out to explore the Pacific. For the most part, they stop in the Galapagos Islands, where they rest, collect supplies and make the great leap towards Polynesia.

Through the website, and after a number of frustrated attempts, we finally contacted Reinhard, a German sailor traveling the world. He was in Panama, but in two weeks was due to arrive on Santa Cruz Island in the Galapagos, bound for the Marquesas, the northernmost archipelago of French Polynesia. We set a day and time to meet.

Reinhard made it to Puerto Ayora, with his modern 11-meter long catamaran with four cabins, kitchen, two bathrooms and spacious common areas. Our cabin actually looked like a hotel room but smaller, of course. Traveling with him was Klaudia, another German passenger who he picked up in Panama. In total, with my girlfriend and me, we were a crew of four. We spent two weeks discovering the natural wonders of the archipelago, and making our last purchases of fresh food to take on the trip.

In Puerto Ayora, there were about 25 boats like Reinhard’s. Most of them were headed in the same direction: sailors from England, France, New Zealand, the U.S.. We were actually the only Latin Americans. Some of them were still looking for fellow crew members to continue their voyages. We realized that finding a boat is a lot easier than it looks. You just have to be in the right place at the right time.

And the best time to cross the Pacific Ocean is between March and June, when the winds are more propitious. 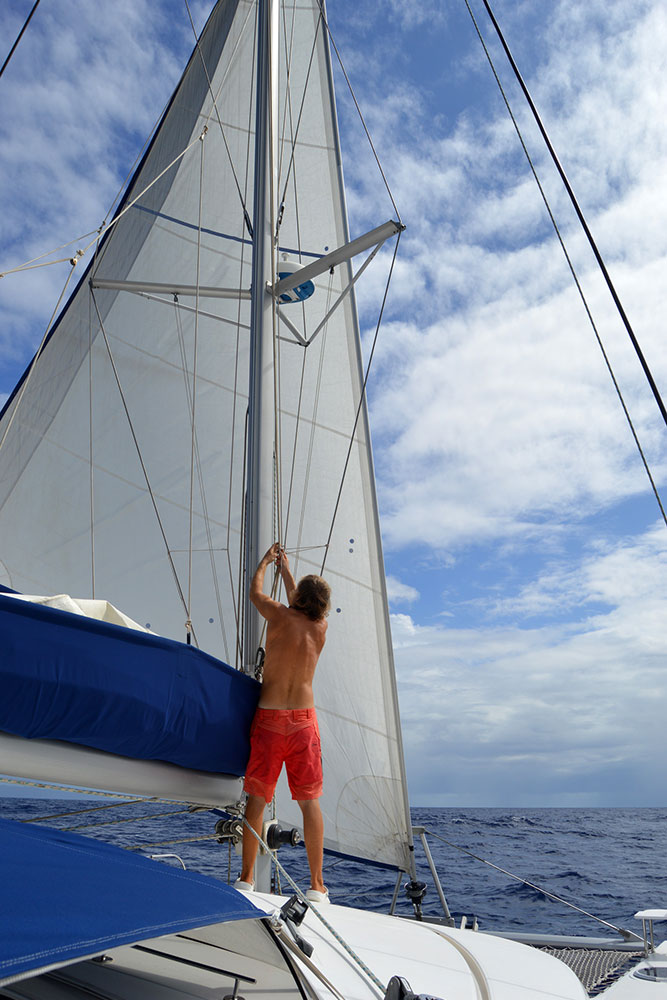 The voyage, we have to admit, is not for everyone. In total, it’s about 5,500 kilometers at a speed of 8 km/h. The time required to cross the Pacific varies according to the type of boat, the size and especially the wind. With all the elements in favor, it takes about 16 to 17 days. At worse, it can take up to 35 days.

We spent about three weeks in the Galapagos, between Santa Cruz and Isabela. During that time, we discovered some of the privileges of spending time at sea, such as contemplating the sunset or eating breakfast on deck with a beautiful bay before us, jumping in the water from the deck or taking a private boat ride along the coast whenever we pleased (the archipelago’s National Park only allows you to sail and spend the night in these two islands, Floreana and San Cristóbal).

Minutes before catching the dinghy that was to take us from Isabela’s port to the unknown, I called my mother to reassure her. I explained that we would not be able to contact each other in a while, but that everything would turn out fine. The departure was actually full of good omens: a group of dolphins jumped across the bow wave, the sun shone, a dozen turtles floated right in front of us, as if coming to say their farewells. Then came silence, broken only by the waves crashing against the hull. It is a feeling of absolute fulfillment. The next day, we were surrounded by water. The absence of physical references – to which we are inevitably so accustomed to – along with the slow passing of the days, made us quickly lose the notion of time.

We often didn’t know if three or eight hours had passed; a little like being trapped in a surrealist Dali painting. A forlorn dream.

After 11 days of navigation, the wind disappeared completely. We could only move with the currents, about 2 km/h. There was no use in starting up the engines, the tanks don’t have enough fuel for the entire trip. So we waited… And with the wait, came the anxiety, the seasickness, the moment to curse the gods. We lived, yes, moments of darkness.

But the Goddess Fortuna smiled down on us once more, the breeze began to blow and with it, spectacular sperm whales, humpback whales, hundreds of dolphins, tunas… We traversed three time zones and the hope of seeing land again became once again tangible. Of course, we listened to Bob Marley, and we read many books. We did our night shifts, awestruck with star-strewn nights we will never again witness. After 23 days at sea, we made out a small dot on the horizon: Land ahoy! We wanted to cry, to laugh, to scream. We hugged each other.

Hiva Oa is a volcanic island with sharp peaks and black mountains, lush vegetation and turquoise waters. The smell of the damp earth stirred my body. We were received by huge men and women with tattoos running across their entire bodies, but who spoke sweetly and sang to the tune of their tiny ukulele. There, we found a Norwegian boat and new friends with whom we toured the islands of French Polynesia for about two months, on the most far-fetched trip we have ever experienced. But that, as they say, is another story…

If you’ve successfully completed your odyssey, don’t forget, you’re in the middle of the South Pacific, more than 5,000 kilometers from home. The best thing to do is to continue on your journey (9 more years, if possible)… by boat to Papeete, the capital of Tahiti, and on the way, the archipelago of Marquesas and Tuamotu. From there, you can either continue sailing to Australia visiting extraordinary places like the Cook Islands, Niue, Fiji or the Kingdom of Tonga (take a good three months to explore), or take a direct flight to Auckland, New Zealand… from where you can extend your travels to Asia or return to Ecuador via the United States.

Pirates of the Galapagos