Primeval stories that lie behind the cosmogony of native peoples, reveal a wisdom that permeates the world after the universal Chaos. The ancestral cultures of Ecuador, like many others around the world, derive explanations about their origin that range from a birth through fire to sovereign giants (present in many ancient myths) or gods like Chiga and the lizards. These voices of voices, where mythology lies, now constitute part of the literature, condensed in the form of micro-fictions.

The Giant and the lagoons

Long ago, before the arrival of the Sun’s children, lived a giant. He was as huge as his pride. He decided to walk over the land’s lakes. He put his foot in Yahuarcocha, which was then called Cochicaranqui. He laughed because the waters only reached his ankles.

Then he walked to Imbacocha, Lake San Pablo. His laughter rumbled in the air because he barely wet his feet.

“These are mere puddles,” he said, and leaned back against the hills of the Karankis, corngrowers who honor mountain and lake gods.

One day, the giant reached an enormous body of water. He barely had the time to shout as a whirlwind enveloped him. He tried to hold on to Taita Imbabura (Father Imbabura) and the forces of nature were so great they left a huge crack in the earth which swallowed him whole. The magnificent giant never knew the hidden lagoon’s name: Cunrro. 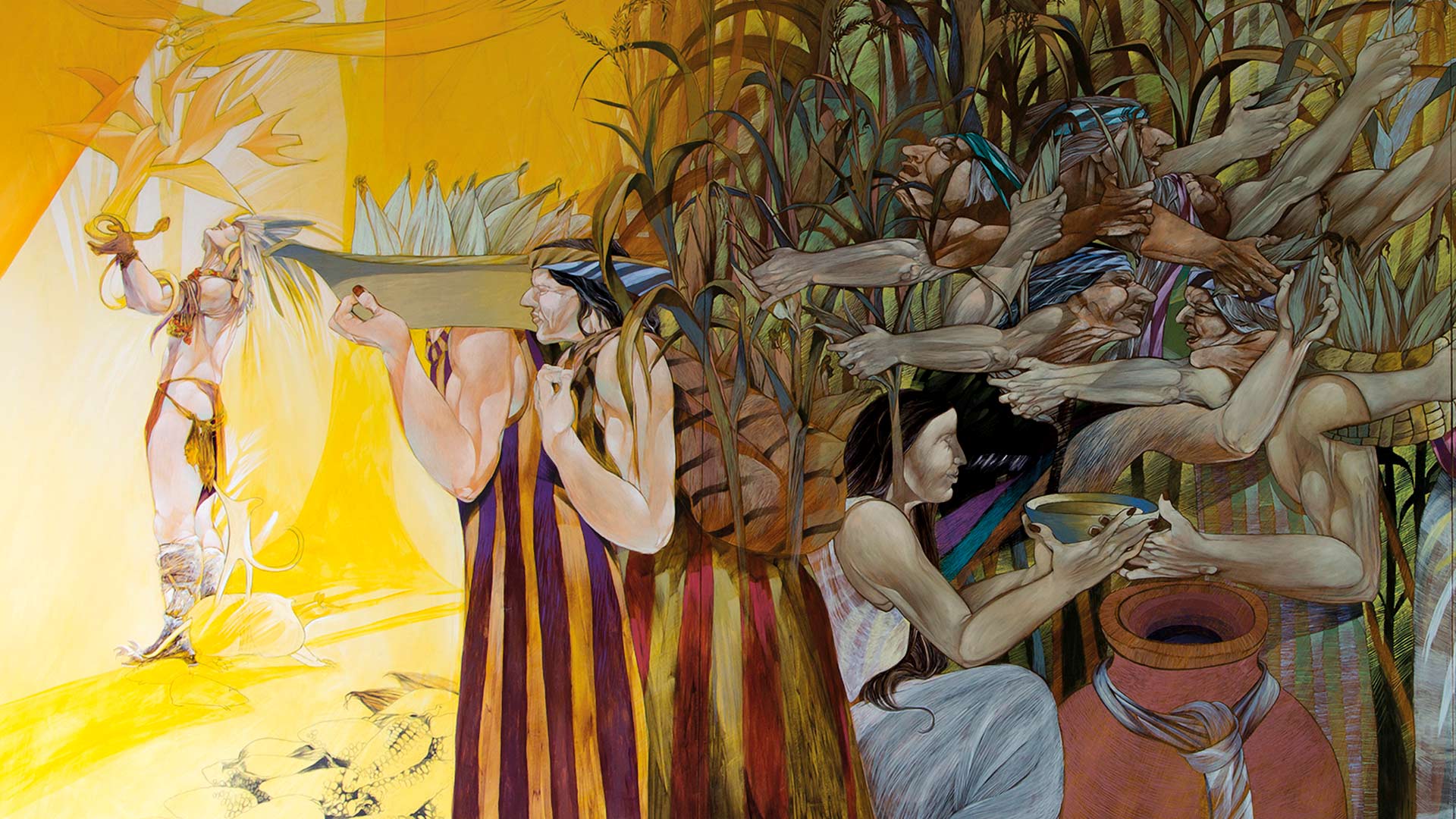 The jungle seemed too small for two shaman. That is why the old and young “yachacs” knew—without uttering a word— that one of the two would not see dawn in the same place. A fierce combat began. It would be false to say that the two did not put the same effort into the fight. But the old man, as usual, dominated through cunning, the strength of his youth. The apprentice yachac did not feel defeated, however. Before the victor’s gaze, he snatched a piece of Mount Sumaco and, as he marched downstream, carried a great number of monkeys and wild boars. In Pañacocha, in that beautiful part of the Napo River, he placed the land that he took from the Sumaco. The piece of the mountain was enough to form an island and he may have lived there. Now that island is called Tereré. The monkeys jump as if the land torn from the volcano was alive…

The toad and the jaguar

A Shuar man went out hunting, ignoring his wife’s warnings, and in the pitch-black night, he imitated the tree-dwelling Kuartam toad’s song: “Kuartam-tan, kuartam-tan”. All remained still until the creature became a jaguar and ate him. No one heard a sound, but half of the body of the man had disappeared.

At dawn, his wife decided to kill Kuartam. She knocked down the tree and when it fell, the creature, which by now had a huge stomach, plummeted to its demise.

The woman quickly cut Kuartam’s belly and the Shuar man’s pieces rolled across the forest floor. “It’s not good to imitate Kuartam,” she thought.

Far away from the dense forest, “kuartam-tan, kuartamtan” was heard again, though we know not if it was a toad or a Shuar waiting for the jaguar.

The planet on the lizard’s shoulders

The elder A’i Cofan say it is bad to kill lizards, known as tufa, because they hold the planet on their shoulders. These creatures with intensely colored scales own the Earth. With their wrinkled legs, these reptiles walk the bark of trees and know the shades of every stone. The most astute animals protect them so that Mother Earth continues to thrive and remains healthy, and the birds keep flying. These leather-skinned lizards keep watch so that the jungle is not destroyed.

The god of the A’i Cofán, Chiga, is always well aware when someone kills a lizard. He gets very upset because he also stands on their shoulders. “Some people do not understand and kill them,” says a spirit, “but, one day, Chiga will be furious and he will end the world right then and there.” 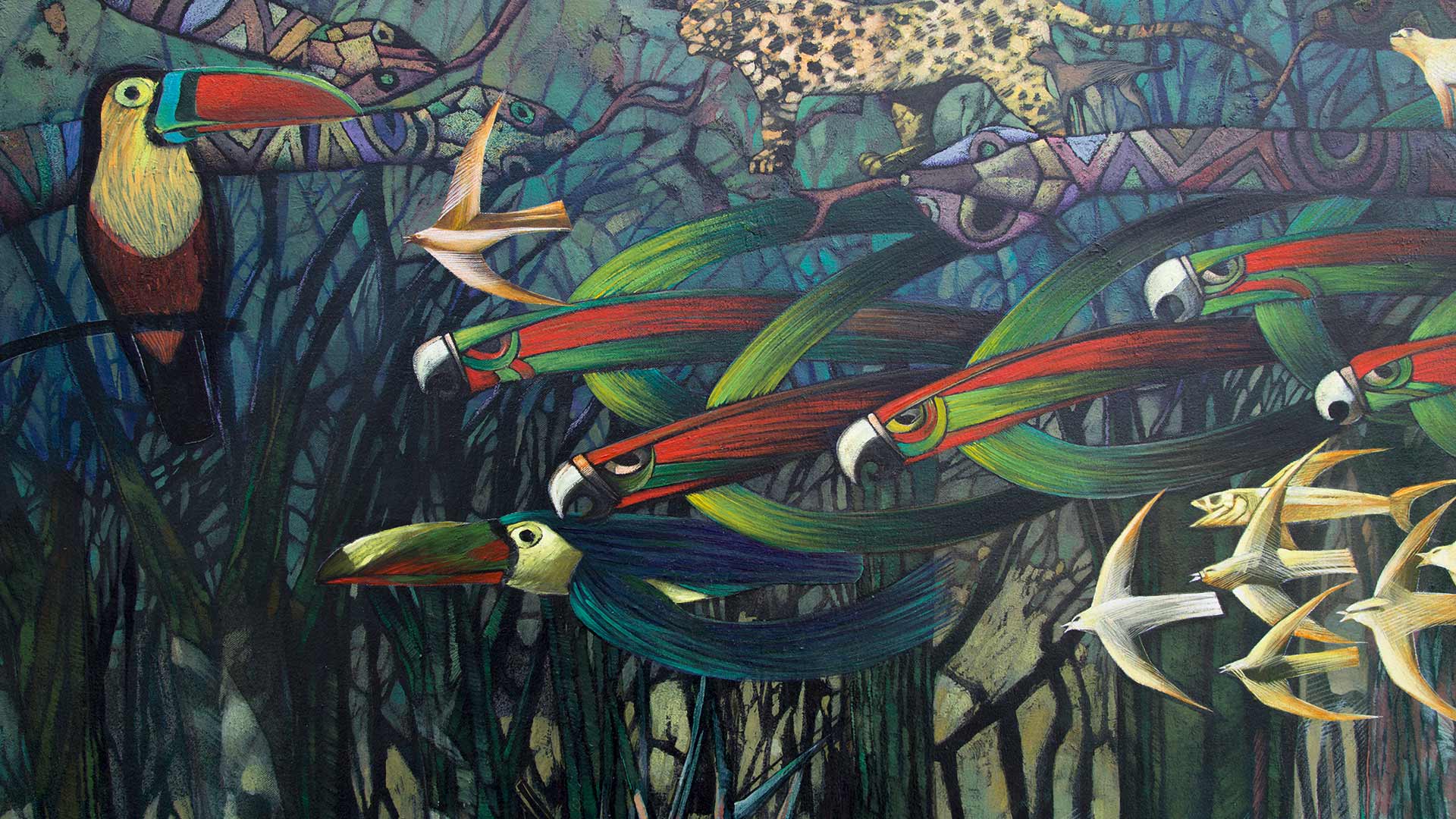 It was cold in the jungle. Off in the distance, the Shuar could see the abode of Takea, the lone owner of fire. Takea was a monster. Every time someone dared to attempt to steal the fire, he was devoured. That is why, as night fell, the Shuar were shivering and afraid.

One day, Jempe the hummingbird arrived at Takea’s cave, after a torrential rain. The children of the underworld god found its feathers soaked and quickly snuck the bird into the cave. Jempe, once recovered, took flight and went straight to the place where Takea protected the fire. To Takea’s astonishment, the bird lit its wings and escaped. The Shuar of ancient times received the fire with joy.

Now, when the Shuar light a fire they always remember Jempe and, sometimes, when the wood crackles, a bird’s silhouette appears in the fire.

Sani Isla: Sustenance and prodigy in the jungle

There is a...
Read more
Ñan art