Life’s a Playas: Exploring the coast southwest and south of Guayaquil

When we decided, for this issue, to center on the city’s river, it was inevitable that we head out to sea, since one is an extension of the other. So, our route takes us to the closest beaches to Guayaquil (only an hour’s drive), meandering through everything found within, around and in between.

Our route to the west, towards the city’s first official beach town, known generically as Playas (Beaches), or officially as General Villamil, (or even as an inevitable combination of the two: Playas de Villamil and/or Villamil Playas), is accessed upon reaching Vía a la Costa (Road to the Coast). We stick to this road, passing by several condos, including massive Puerto Azul (one of Guayaquil’s many cities-within-a-city), and the must-visit Cerro Blanco and Puerto Hondo, before reaching the toll that officially marks the city limits.

Just before, to your left, find the first of Guayaquil’s outskirt towns at Chongón. The Chongón Hills, or Cordillera Chongón-Colonche, is the emblematic mountain range that borders Ecuador’s south-central coastline, filled with spectacular biodiversity and natural beauty. Recently, the existence of albarradas, a fascinating 4000-year-old pre-Columbian system of water level management, has been revealed by archaeological teams… Chongón offers visits in the nearby estuaries where one of the ancient albarradas still lies. 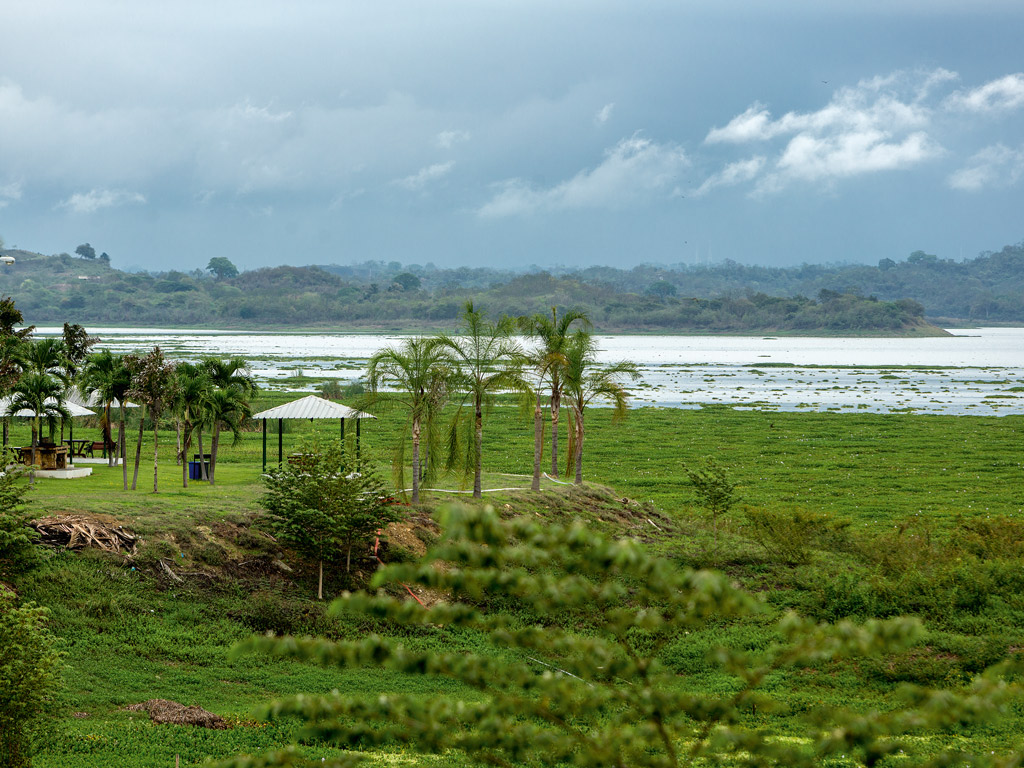 Don’t miss out on spectacular Parque El Lago on your way to the beach!

The first on-route sight-to-see past the toll to your right is Parque El Lago. This is a massive water reservoir, which extends before you some distance away from the lookout point, park-style installations and parking area. The scenery is dramatic, calling one to set out and discover the spectacular tropical jungle mirrored between marsh and water. Kayak and sailing are common activities in the area.

Continuing on, we pass by several small towns, El Consuelo and Cerecita, lining the highway. You may even notice the out-of-place ostriches prancing around in their corrals… In the area you’ll find eateries, predictably enough, offering ostrich meat. The most important town on your way to Playas is Progreso, also known as Juan Gómez Rendón, preceded by a string of what once were quaint bamboo and wood kiosks, and have transmuted into less exotic cement blocks.

A little ways on, you’ll find the turn-off south to Playas (continuing straight (west) takes you to the beach town of Salinas). Apart from the small town of San Antonio and some shrimp farms in the distance, the most interesting thing here are the guayacán (guaiac) forests that are especially beautiful in bloom (in January), when their cadmium yellow flower blossoms fill the landscape. Playas lies straight ahead.

Playas’ best beaches are located to the far north, but the housing condo/complex Casa Blanca has made the area difficult to get to by car. Walking up the beachfront 1 km takes you to La Posada, where surfers find great waves and far fewer people. Closer to Playas there are medium-sized waves with ear-catching names like ‘las tetas’ (the breasts) or ‘el sapo’ (the frog). Local surf moguls, including Jimmy Zhañay will happily give you the skinny on the best sites and when to ride them.

El Pelado is our first stop out of Playas (take the road to Engabao and about five minutes along, a sign shows the way to your left). Although you really haven’t traveled far, one instantly feels relief of considerably fewer people than Playas. To the right, you’ll find rockier terrain, less comfortable if you are with the family… To your left, you have well over a kilometer of open beach to comfortably find a spot. The point break here is considered epic amongst surfers. 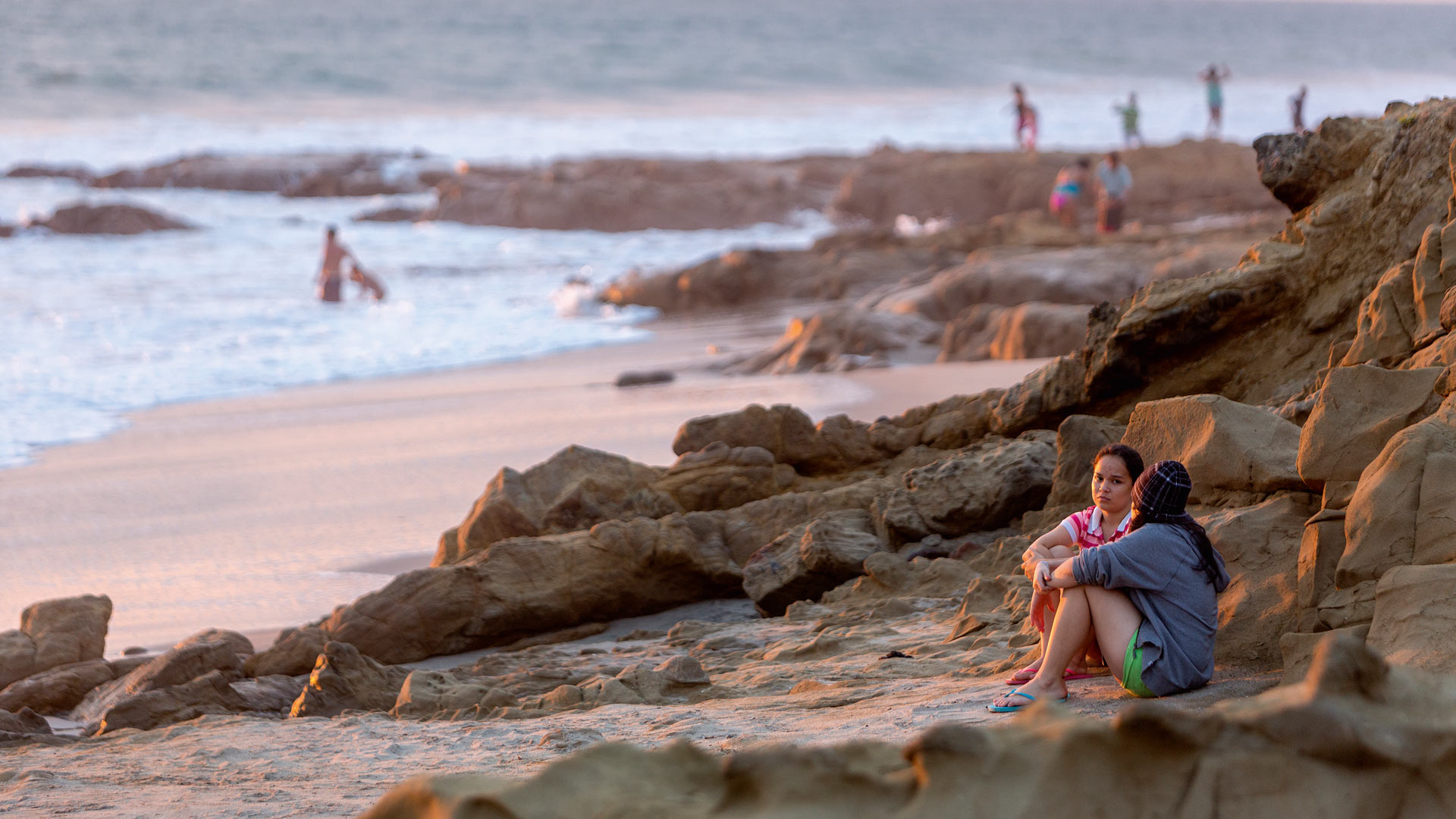 The Engabao road obviously takes us to Engabao, a very humble town – it seems today as though it will be perennially in construction – where you will notice the inexplicable population of pigs roaming around in an almost dog-like existence (a local adage here is that there are more pigs than people).  Although Engabao has its reputation, the place you’ll want to head out to is actually called Puerto Engabao (the distinction is important), and lies some 5 minutes north.

There is something innately picturesque about Puerto Engabao, with its dainty red-and-white lighthouse and its attractive bamboo church, the beachiest thing this side of the Pacific. Twenty homes in and around the small fishing town have been refurbished in order to offer room and board for incoming surfers. Puerto Engabao’s point fills with all kinds of surfers, kids, teenagers, adults, championship class and apprentices. It is a wonderful spot to learn how to surf, to practice surfing, or to sit on the rocks that jet out to sea and witness this amazing sport up close, since the point break is only meters away.