Las Conceptas: Inside the cloister

The candles are a preamble. A devotee crosses himself before the image of Our Lord of Justice, wounded since it was first carved in colonial times, in the style of Quito master carver Sangurima. Outside, the bustling Red Square seems to vanish as the blue turnstile, moving like a dusty mill, sucks us into the world of the Conceptas nuns at the cloister of Riobamba.

It is known that, after crossing the sea, religious representatives settled in Riobamba in 1605. There they stayed until the 1797 earthquake, when the 12 nuns who survived amid the rubble were taken to Quito. After two years, they returned on pilgrimage and never went back.

“Ave Maria Purísima,” says the visitor. “Conceived without sin,” he answers with a hushed voice. After a short time, the Abbess appears. In 1957, with a dowry of 5,000 sucres, Bernardita de la Inmaculada Concepción Echeverría entered the Franciscan complex, which was originally founded in 1498 by Beatriz Silva and Meneses in the labyrinthine city of Toledo.

One must kindle a special friendship with the dwellers of this home of peace and religious chastity: it is a cloister, after all. After passing through a small lobby, where the floor is a collage of bones, Sister Jacinta María de San Antonio Velasteguí appears, with an affable smile, followed by a religious expert in the lotions and potions the nuns sell. 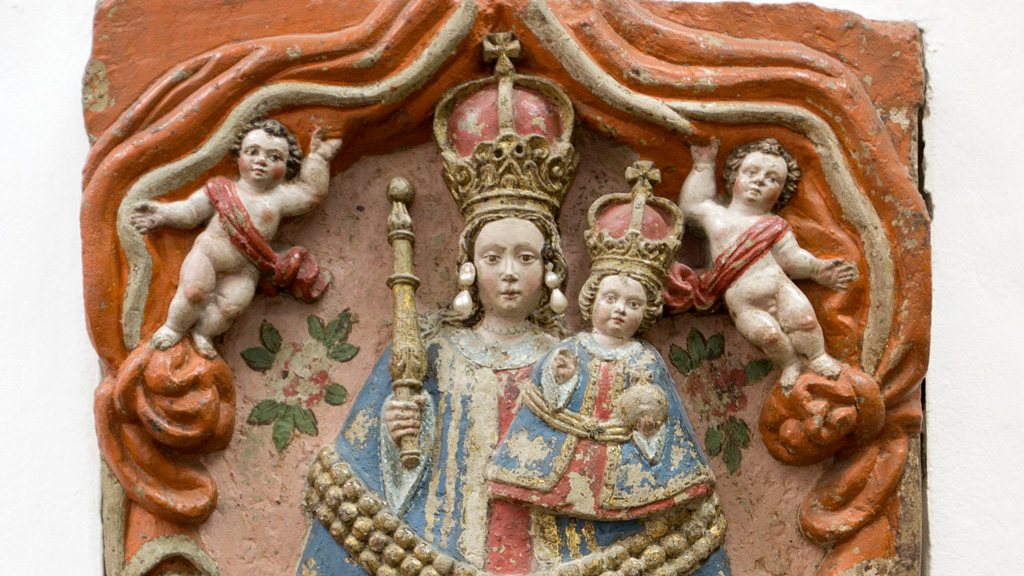 Although many believe the nuns live in perpetual penance, it is a lifestyle they have chosen and they seem happy with that choice: a sign on one wall reads, “The bars are not to stop us leaving, but you entering.” Despite the few human inhabitants at the abbey, there is rarely a dull moment. Today there is an uproar because a young calf came to close to the cabbage patch (every sister has a designated place to cultivate her own produce). The mother of the calf, buried in the garden, died in childbirth, and the little animal seems frightened. Nearby, a peacock ignores the ducks hanging out near the pond. A small dog trots closely behind the abbess.

The 15 nuns living within the convent must be disciplined. They get up between 4:30- 5 am and burst out their twelve Hail Marys. At 5:30 am, they hold a service behind green bars. Back in the day, they had two baby grand pianos, but now they play their sacred music on a synthesizer. After tidying their cells they are ready for breakfast at 8 am. Each nun then tends to her crops and daily chores. A frugal lunch of soup, as per the teachings of Carlota de la Santísima Trinidad Cisneros, contains rice and beans for half the week and Andean produce the rest of the time. They then pray to the Seraphic Crown and work through the afternoon. They keep time as they did in medieval times, using canonical hours of matins, lauds prime, terce, sext, none, vespers compline. Once this cycle is done for another day, they go to sleep. Night falls: outside, the world continues spinning. 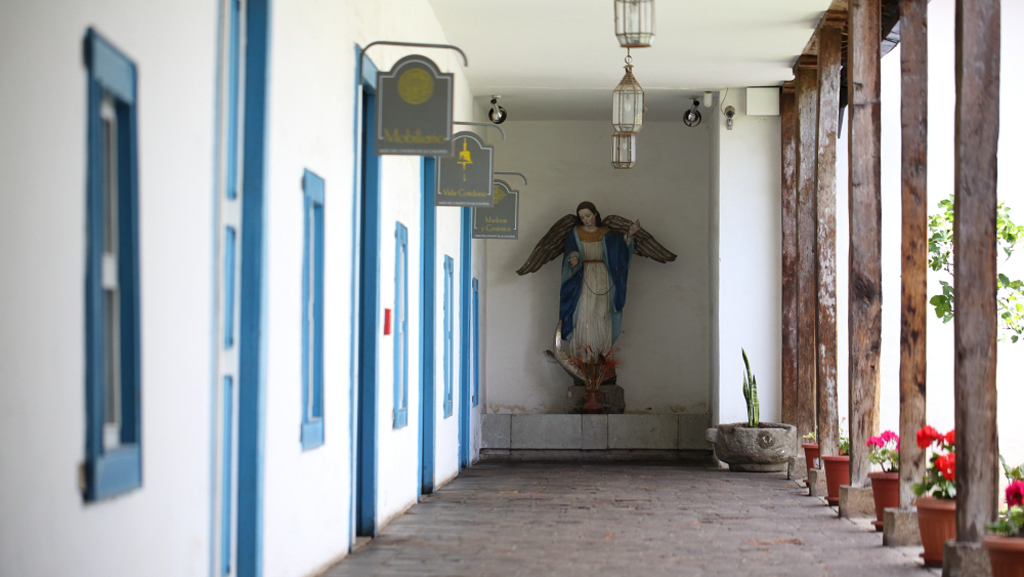 In colonial times, Riobamamba’s powers that be met to right a wrong. Centuries earlier, a Lutheran named Sibelius Luter had tried to desecrate the temple, so his head was cut off and this image, with two crossed swords became the city’s shield. But that was not enough. In 1705, one of the region’s most impressive religious pieces — a meter-high monstrance — was offered to the city to make amends for the “attack against the Sacred Host during the festivities of St. Peter the Apostle.” It was made out of gold and silver by indigenous artisans. It weighed 80 pounds and was encrusted with some 3,500 precious stones, including emeralds. It was the pride and joy of Riobamba’s Museo de las Conceptas; Bishop Leonidas Proaño caused an uproar when he suggested selling it to raise funds for necessary religious works. It was a tragic loss when it was stolen in 2007 when the guards were watching a big soccer game.

This preamble helps us better understand the building located at the corner of Argentinos and Colon. As well as the museum, behind the turnstile is a convent, screened off from the public with a store where the nuns sell their wares — ointment, creams and tonic infusions — to rid anyone and everyone from evil and suffering. On your way in, don’t miss “Our Lord of Justice,” a painting hundreds of locals kneel in front of every day. 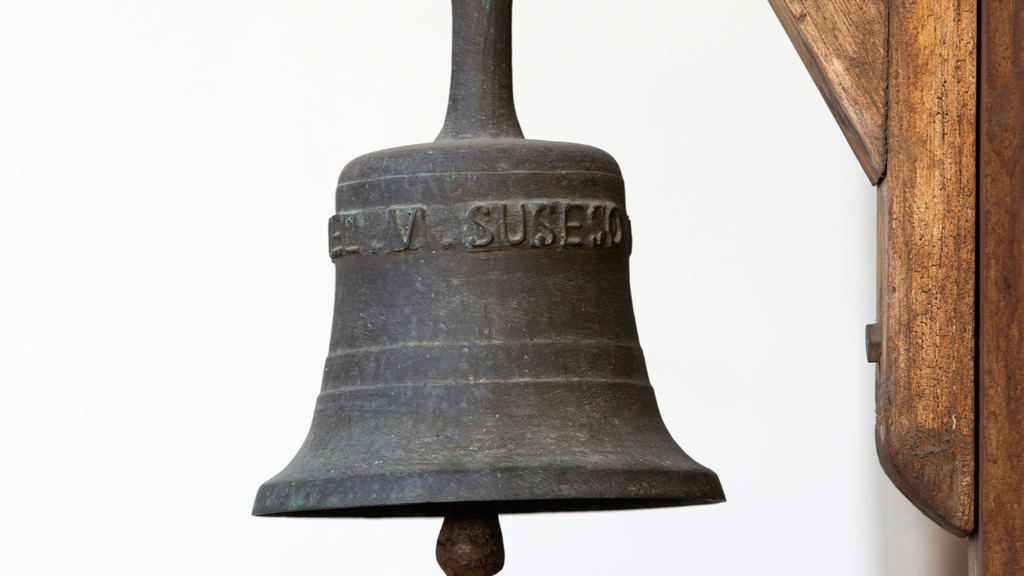 Even without its star piece, the museum is a treasure trove. Its 14 rooms offer an overview of the splendor of a city devastated by the 1797 earthquake. Although there are more than 200 objects to take in, start by looking at the floor, which is made from symmetrically arranged sheep bones! The collection is displayed thematically through the rooms into religious ornaments, furniture, daily life, Latin American gold and silver items. Much of the art comes from the so-called Quito Baroque School, such as the robe and scepter of the Virgin of Sicalpa and the sculpture of the Virgin, which many say was carved by Diego de Robles, the same sculptor who crafted the revered icons of the El Quinche, El Cisne and Guápulo virgins.

Despite the museum’s dazzling collection, ironically, the room that is the most striking is arguably the one recreating a simple nun’s cell, whose simplicity and starkness takes visitors out of the present to truly evoke the past.