‘Of all the saints, the Child is the only one who gets down on Christmas Eve!’

A homicide of the jungle deep, of time immemorial, of peoples long disappeared, nomadic people that everyone has considered extinct for ages, returns to life amid buildings and asphalt, in an enclave that today has no link with the village world, let alone the jungle world, which, we imagine, was once the setting of this unusual Christmas celebration…

“How does the Yumbo die?” scream the Quiteños. It’s Christmas Eve, 2016, and we’re traveling in time… “Speared”, answer the others, in a drunken frenzy.

How this Yumbo has survived to this day and age is a mystery. Especially in a modern age that has been so cruel and indifferent to the rituals of the forgotten. These forgotten ones, however, recreate their own death every year, and they are more alive than ever.

The inhabitants of La Magdalena — once a town in the outskirts of Quito and today just another neighborhood of the city — cannot remember when this celebration began. The only certainty they keep is that they “must dance with devotion to the Child”. It is a celebration unknown to almost everyone in our country; a religious celebration (since the Christ Child is, somehow, part of it) in which the solemnity of the liturgy is combined with pagan rites that could feasibly go back millennia.

Yumbos, Archidonas, Negros, devils, and other dancing characters come out to celebrate, accompanied by the sonorous trance of drums and tiny prehistoric flutes called pingullos. It is difficult to separate the sacred from the profane; religious fervor is shown by dancing, singing and drinking. The celebration lasts several days and the masses can be extended until Carnival, two months later. A long end of year bash that coincides with yearly cycles as modern as they are ancestral. 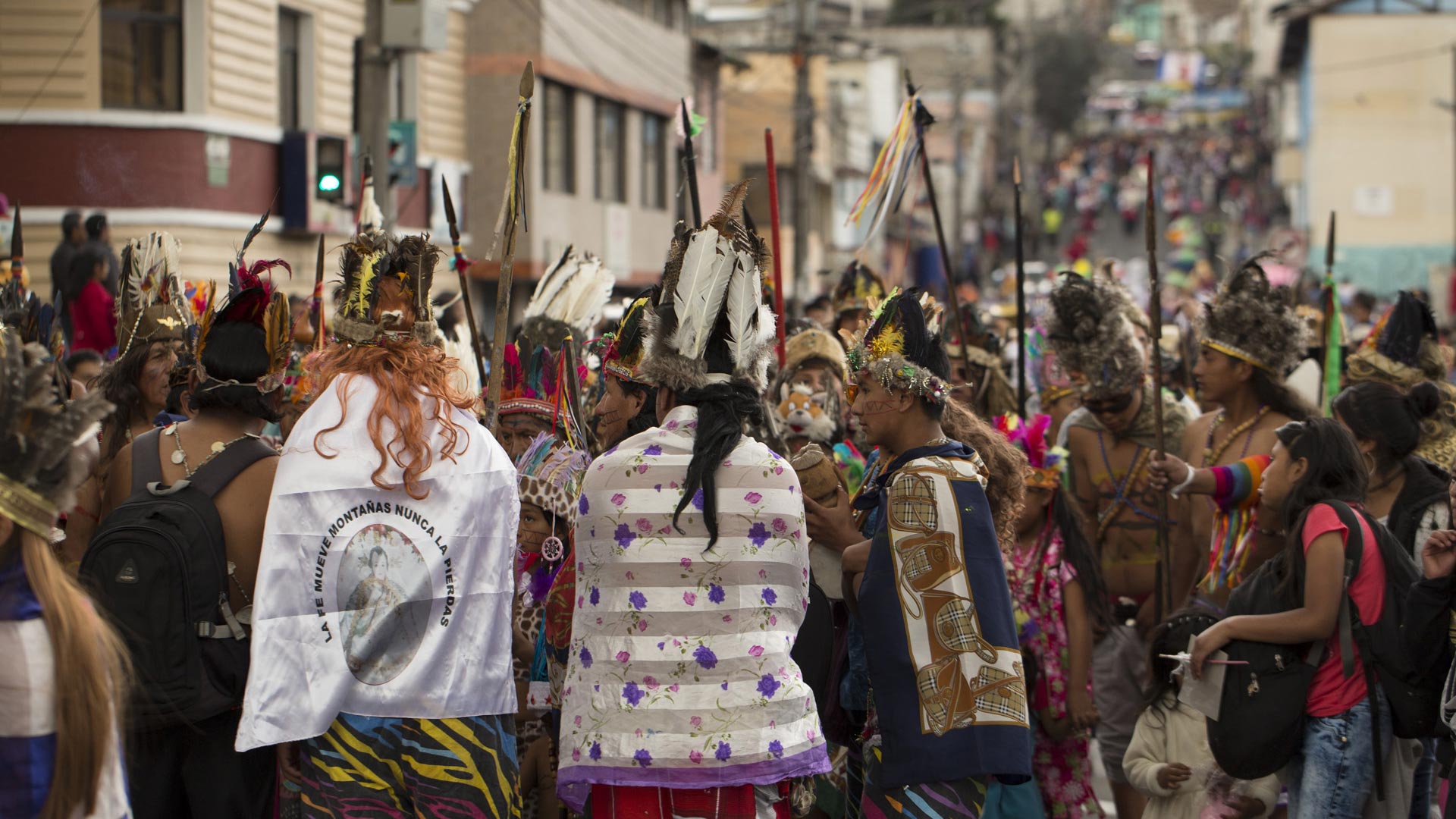 The organizers of this festivity begin preparing the celebration as soon as they end; but it all intensifies a week before Christmas, when the dancers are received at the organizers’ homes. This is a big date, actually… it gets the party started. By Christmas Eve, carols are sung and village bands play; whistles, fliers and prayers take place in Dos Puentes, in La Magdalena, where the traditional Procession of the Child (Pase del Niño) sets out down the streets that lead to the neighborhood church.

Floats carry Santa Claus (of course), but also the Child, Mary, Joseph, the three Magi and the Angel; shepherds, candle bearers and incense burners; bears, bulls, clowns, devils, Negros with faces painted black, Archidonas with their jungle plumes and Indian attire, and the Yumbas and Yumbos, the sacred medicine men and women of the Andes forests. The Negroes, with their metal jugs, are responsible for getting everyone drunk.

The Diablo Uma is a malicious character who’s in charge of lashing those who don’t dance. Yumbos and Archidonas forget they attend a sacred act and fall into a trance as they confess their mischief: “some of us go dancing, some of us go causing ruckus.”

Fires are lit. The music bursts out. Some lose consciousness, some sing, some seek out an ancestral past, others fun and revelry: are we celebrating the Miraculous Child, the Naughty Child, the Partying Child, the Sacred Child?

It means: “the killing of the yumbo”, the climax of this festivity. While the church celebrates Christmas Mass, two versions of the story are recreated just outside, at the main square: the persecution and execution of the Yumbo to a Zaracay (Tsáchilla) assassin, with whom the Yumba has betrayed him. Or… the Yumbo who betrays the Yumba, and the Zaracay hunts him down for his treacherous ways. To avoid war between peoples, in both cases, the Yumbas hide and protect their lover; the attendees participate helping him and the traitor manages to infiltrate the group. While the hiding is going on, a Diablo Uma plays the role of the snitch, and finally points to the traitor, who’s then caught. The justiciero (the keeper of justice) grabs him and reenacts the murder. 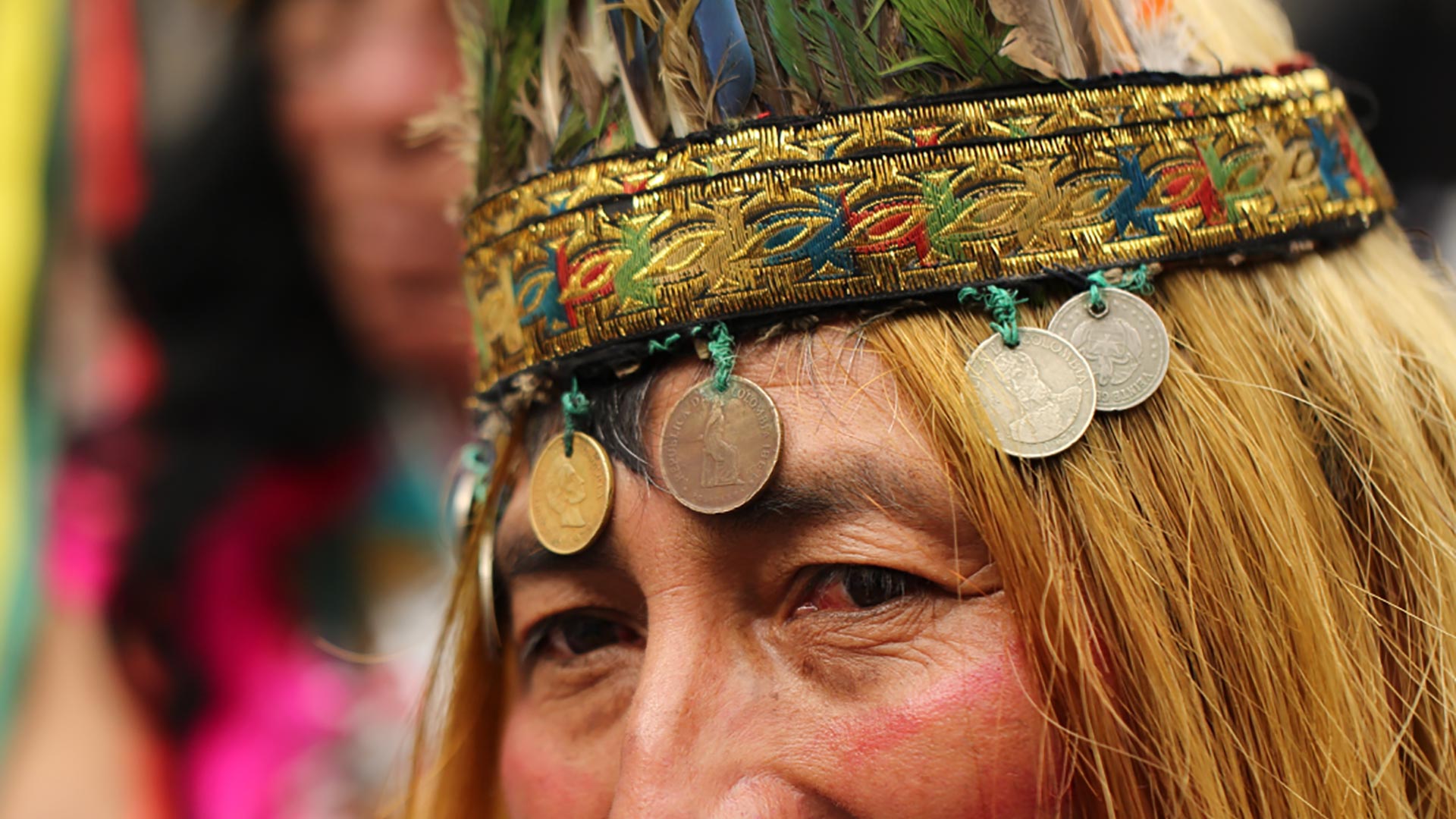 Finally, the dead are given to the Child God, who, in the arms of the priests, has now left the church and joins the celebration that takes place outside in His honor. The Child is the one who decides who will be revived. The crowd screams with joy because war has been avoided.

The Diablos Uma, who were also caught, are released and, along with the Negros, continue to encourage the people to keep drinking and dancing in honor of El Niñito (The Little Child). The village marching bands take over. The party bursts into being to the rhythm of their stomping beat!