Of all the taxa studied within the Yasuní, that of insects is the least known. Statistically, it is said that there are over 100,000 species of insects per hectare of forest. The list is lengthy in terms of surprising encounters. 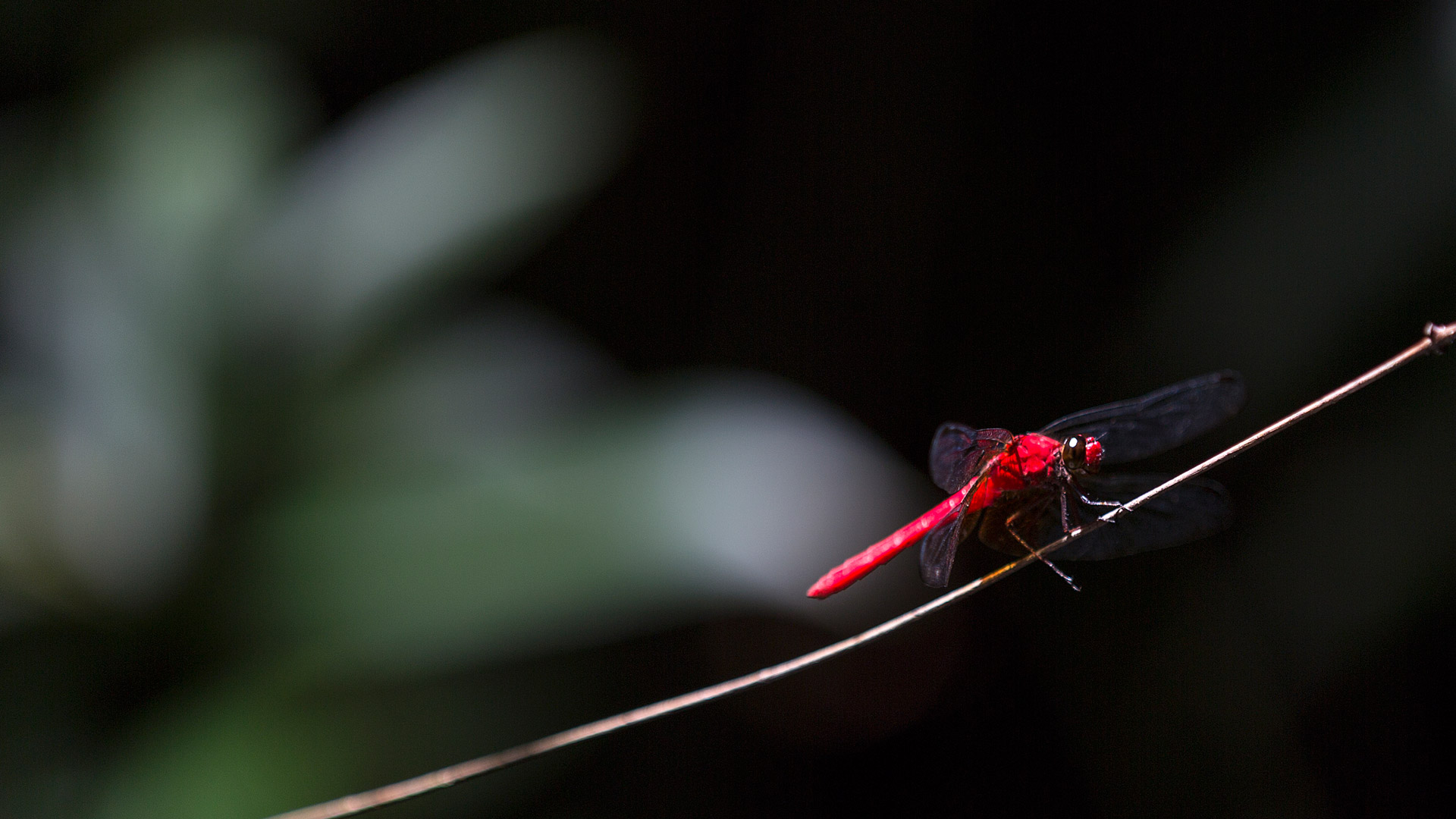 The world of insects, so despised by most observers, is actually a fundamental part of the unprecedented spectacle the Yasuni offers its visitors.

This beguiling animal community is truly one of mystery and wonder, full of deep complexities and amazing demonstrations of societal organization, adaptation, camouflage, mimicry, symbiosis and more.

Despite being so small, they generate deep and irrational phobias in so many people. But, ecosystems require their existence in order to thrive and remain balanced, especially in tropical rainforests, where insects are not only abundant, but also extremely diverse, exhibiting awesome shapes and colors. 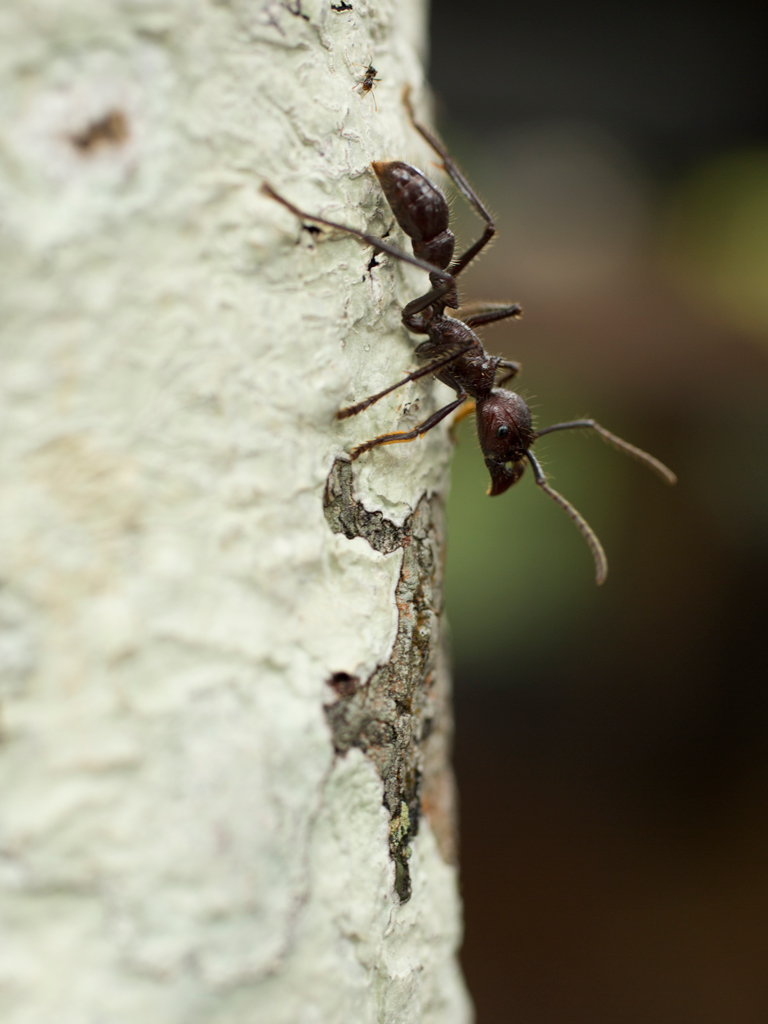 Rhinoceros beetles, for example, are the strongest living organisms in the world, capable of carrying over 800 times their own body weight; harlequin beetles display vibrant orange, red and black patterns as complex as a Persian rug on their wings; adorable tortoise beetles flaunt beautiful golden or deep scarlet ‘shells’.

Butterflies are also eye-catching, especially the beautiful giant ‘Morph’, the jungle’s true ‘blue eyes’, which may suddenly cross your path ‘blinking’ as it flutters. Moths, which are usually drab and uninteresting in most places, are just as striking, including the iridescent Urania (which is, by the way, diurnal!) or the creepy white witch or ghost moth; there are also wasp moths that, as their name suggest, have adapted to look like wasps, or the so-called ‘Sphinx’, which blends to mossy tree trunks; and others still are gigantic, like the Rothschild’s Moth, among the largest in the world.

There are snail-eating fireflies and bee killers; there are stingless bees, orchid bees of the most exquisite colors, walking sticks that look like fallen twigs, lichen bugs, that look like lichen, and leaf katydids, shaped like dead leaves: some even mimic leaves partially eaten by ants! Not to mention the arachnids, the Tarantula, the wooly mammoth of the invertebrates. 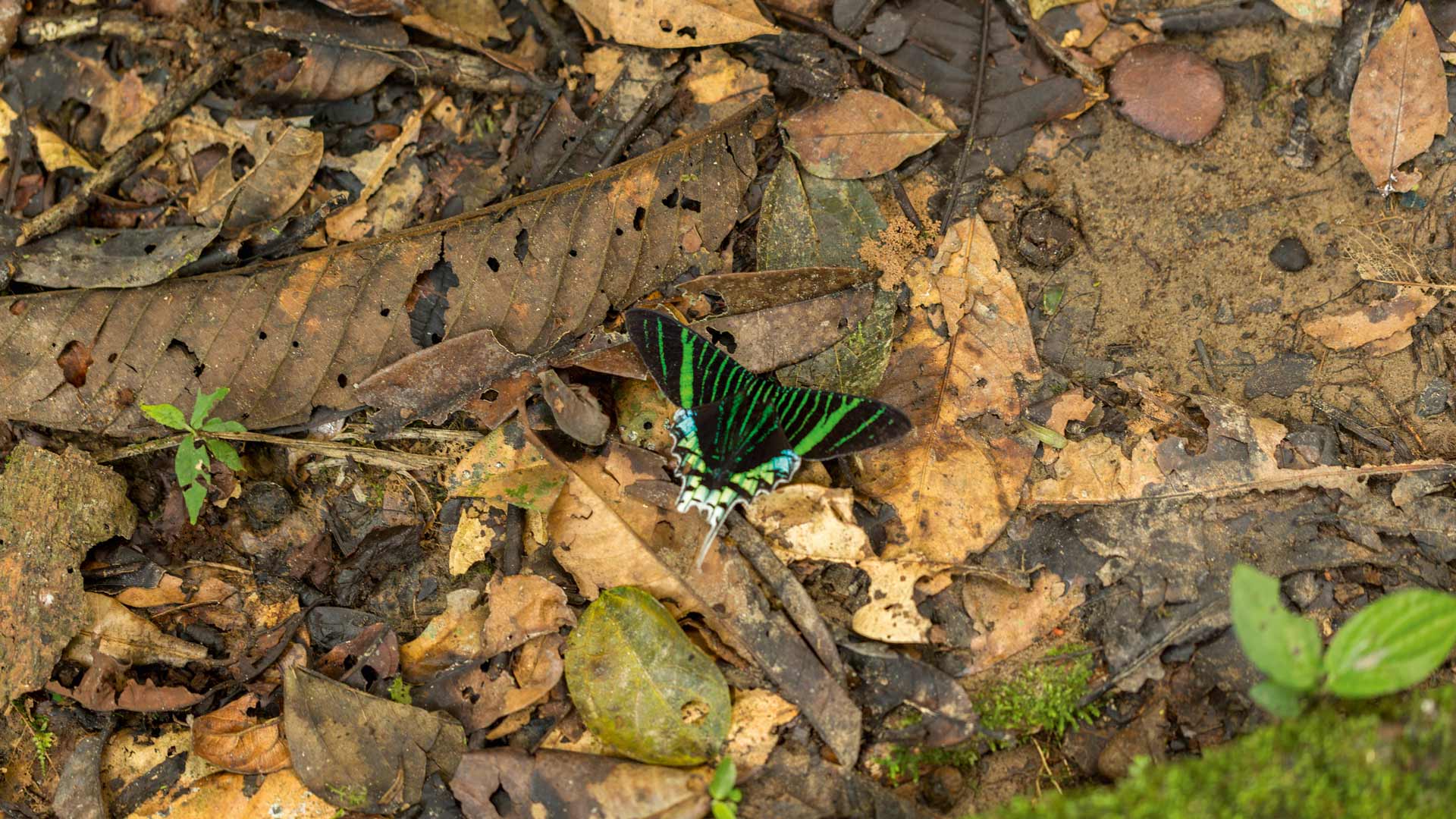 Ants: Life in the swarm

Ants belong to a fascinating group of insects that scientists have gone to great lengths to identify and study. Incredibly, it is estimated that there are over 600 species in Yasuní, in different microhabitats and forest strata, showing amazing behavioral traits of social organization. Many of these species (24%) exhibit mutualism (interaction between two species that benefits both).

An example is the so-called “Devil’s Garden” where lemon ants (named for the acidic flavor the have if you actually try them) live in mutualism with a plant known as Duroia hirsuta, which additionally hosts them. The ants protect the plant from herbivores and clean its surroundings, preventing other plant species, potential competition for nutrients, light and space, to grow near them.

Another fascinating case of mutualism occurs between ant species and a species of caterpillar that secretes honey. In exchange for this ‘delicacy’, the ants carefully protect the caterpillar from predators, so much so that they will carry and give the caterpillar shelter in safe places to avoid being eaten by birds or other animals. 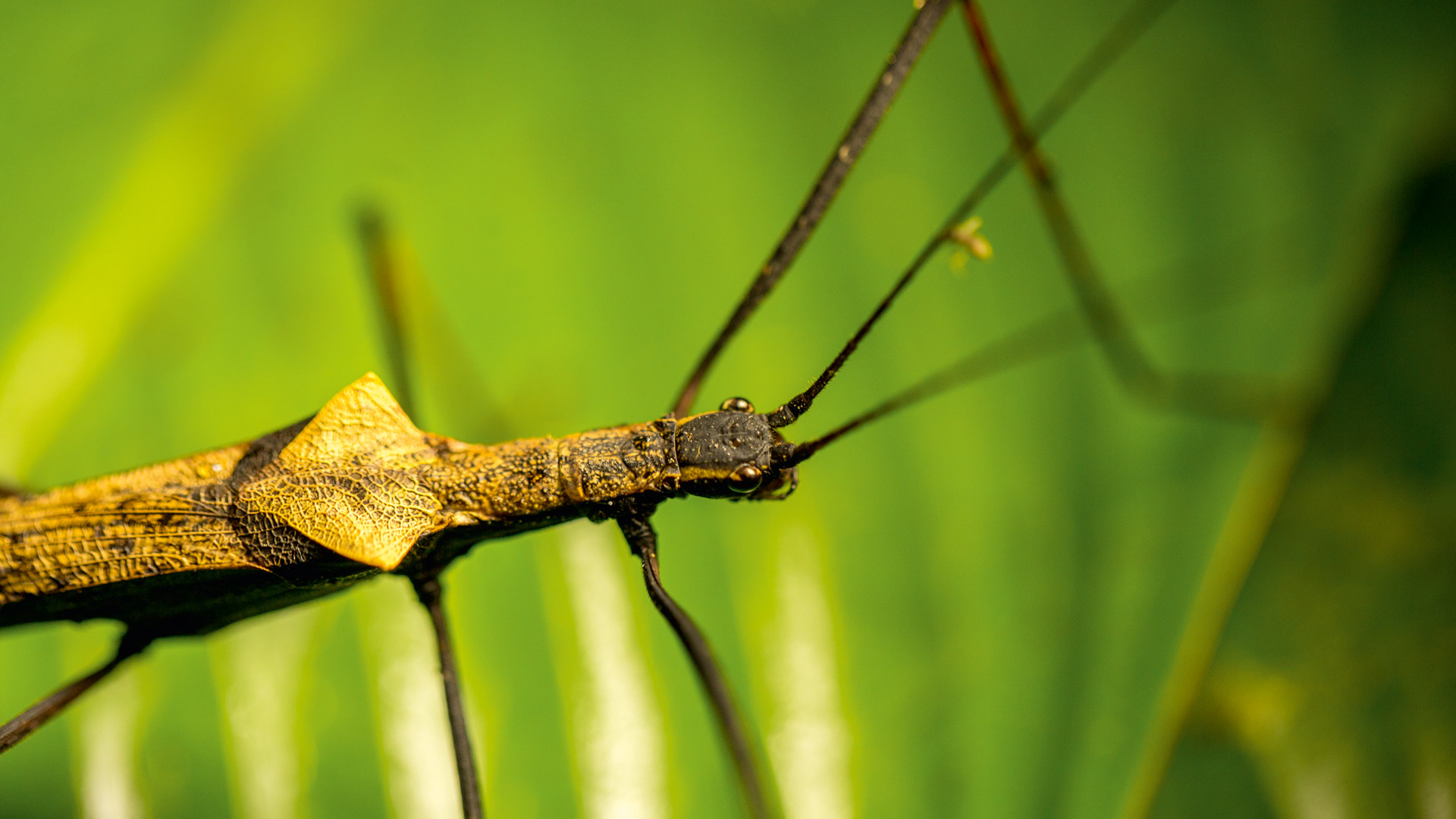 But there are perhaps no ants, in the rainforest, more memorable than both leaf-cutter and army ants. Both show the same intense degree of communal life; the former are very difficult to overlook in forest soils, while building endless roads on which they carrying small slices of leaves, stems and even flowers, towards the immense labyrinth where, like true farmers, they cultivate a fungus harvested for their livelihood. These ‘nests’ can have over one million members and can cover 4 square meters; Their complex hierarchical system includes a queen, the founder of the nest, and different groups of ants that divide chores according to different physical attributes.

Army ants, on the other hand, get their food by hunting in organized troops that attack larger insects, and small animals, annihilating them through sheer number, carrying prey back to their nests. Army ants also exhibit hierarchies, and so-called ‘workers’ protect Queens, whom they carry through the jungle, like genuine bodyguards. Certain bird species (many classified as ‘antbirds’) associate with these ants, snapping up a variety of prey items that try to escape the oncoming invasion. 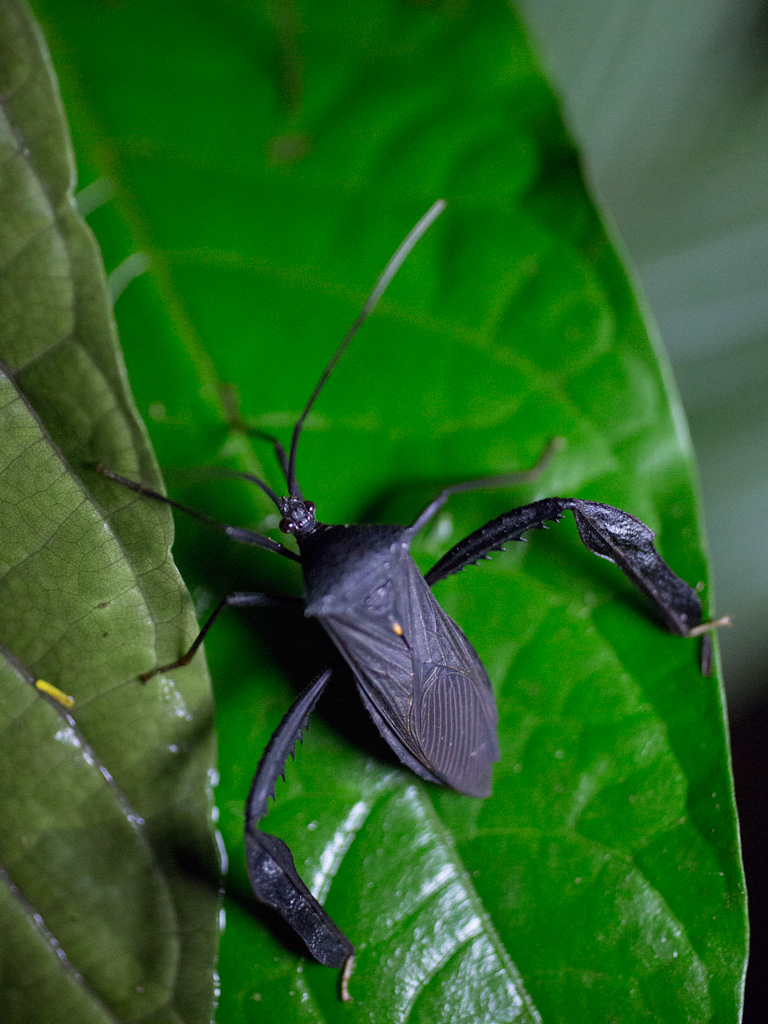