The natives say that the waterfall has healing powers. Not only is it a place of beauty, reached among winding, forested paths, but also a site for rites and ceremonies, enjoyed and employed by those seeking to purify their souls. Thus its modern name.

As in any adventure, the road to the Hola Vida waterfall is not entirely straight. But that’s part of the fun. On the road south from Puyo to Macas, you come to La Esperanza, a land made up of various indigenous communities. As we make our way deeper into the jungle, stories of these lands come back to me. Patricio, an old friend and guide, claims that “living jungle beings” help those who visit them. If you are lost, they will show you the path; if there is danger, they won’t let you leave until it has passed. 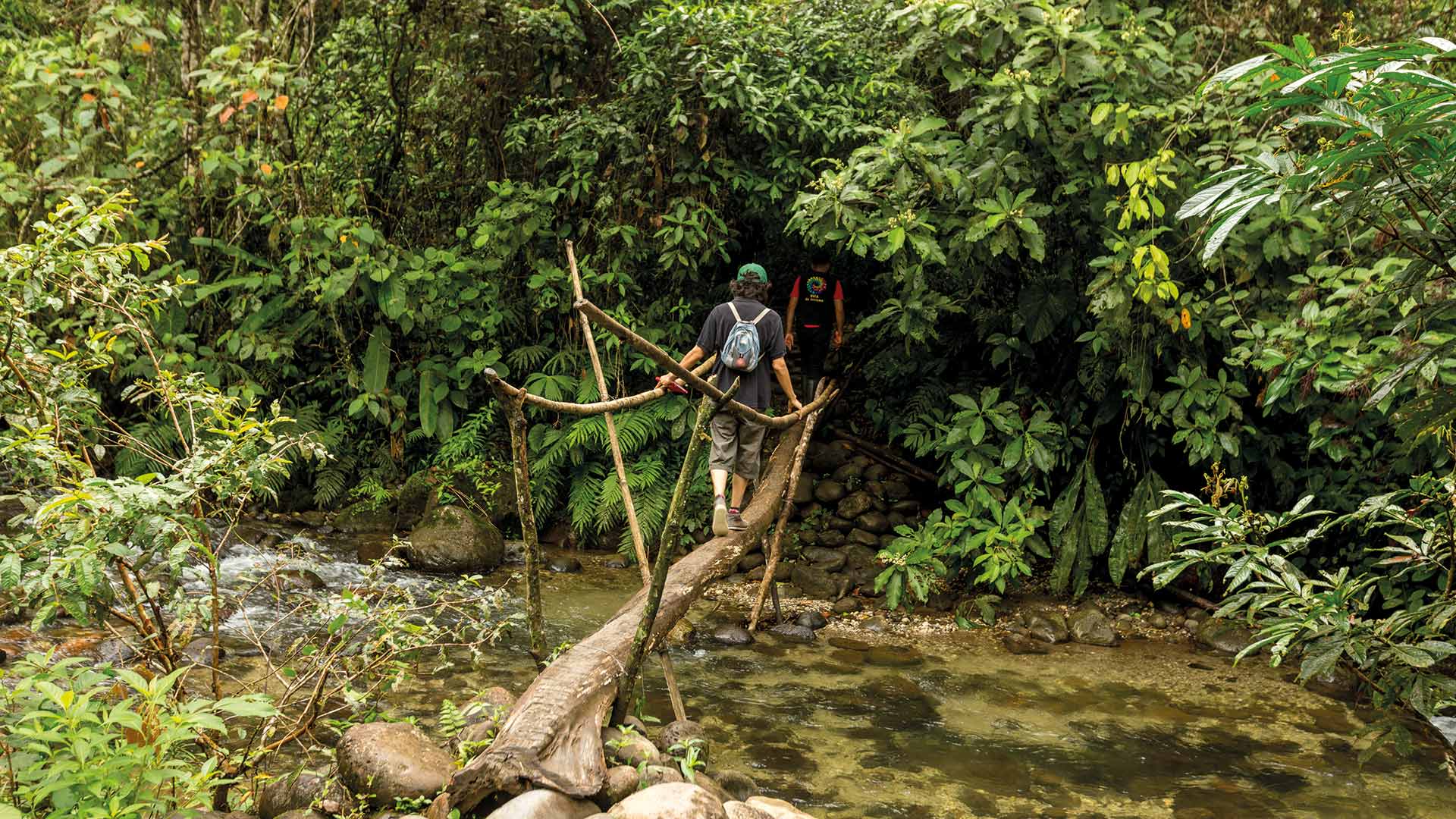 On the way to Hola Vida.

To reach the waterfall, we walk from a small makeshift village dotted with modest houses, at the entrance of the trail. Patricio receives us here with a large, open smile. The trail is a riot of green vegetation, and splits and bifurcates time and time again. A guide is more than a good idea. Paths lead off to the “Escondida” or “Shaman” waterfalls, names that are commonplace in this neck of the woods, but befit the mystery. Reaching down to the soil at the edge of a stream, Patricio scoops up a mound of gray clay. He says it kaolin and smeers a smudge on my face. He claims it’s amazing for your skin. “In a spa, you’d pay serious money for this. Here, the jungle shares it with everyone!” 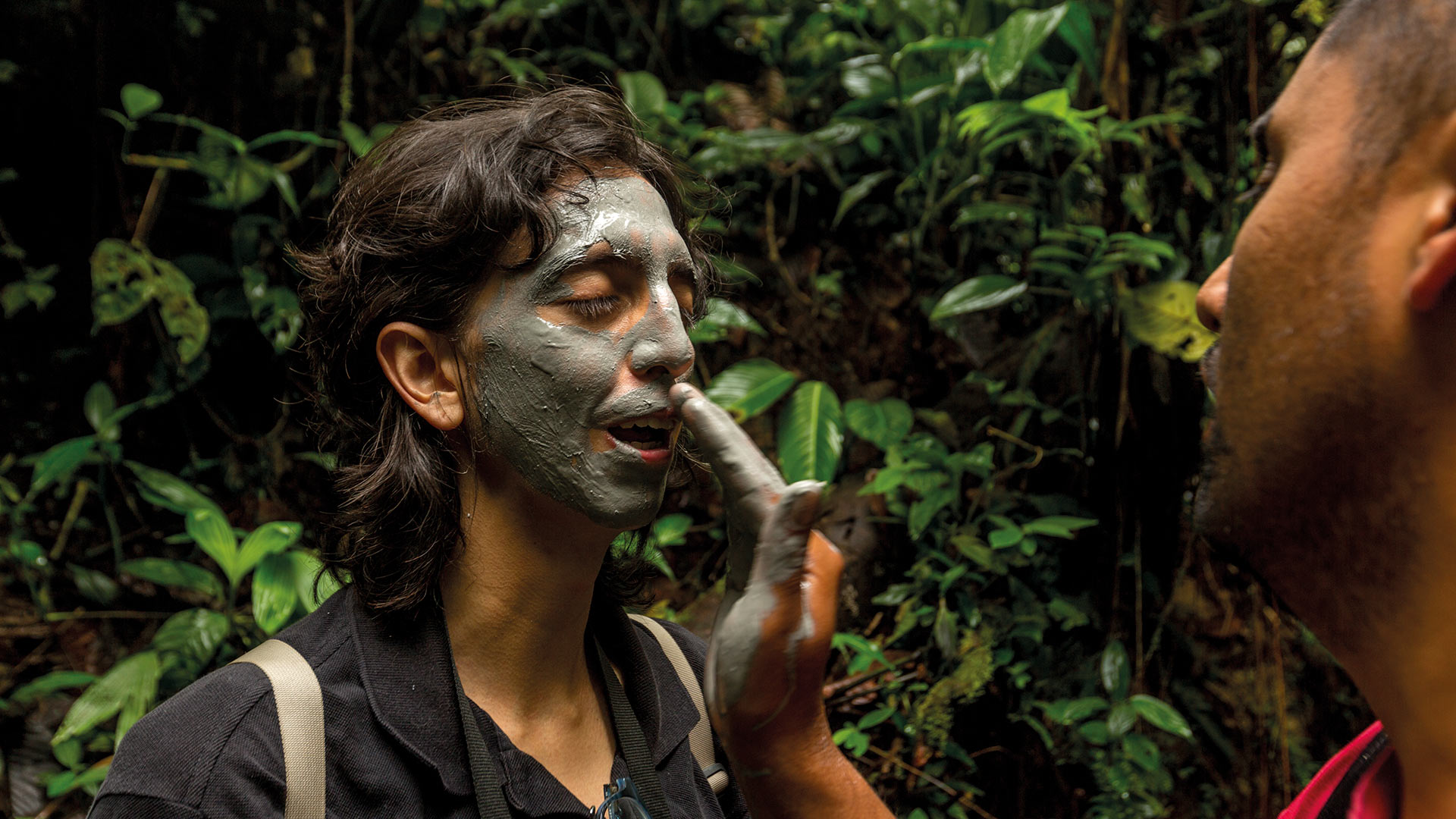 We can hear the din of the waterfalls in the distance. The roar grows more and more intense until we finally come out to a clearing where an enormous rock face supports the hidden world of Hola Vida, a 20-m-high waterfall that crashes, echoes and emanates a refreshing dew. Patricio shows us the shiny stones carved with human faces, that he says reveal the site’s use as a meeting place for ancient communities to practice healing rituals. The natural pool, which the waterfall has excavated and carved over centuries, is cold, but, as one approaches the center, it paradoxically begins to warm up. This magical effect is compounded by the fact that one leaves practically dry after bathing, and of course, completely recharged.

Back at the village, a lunch of local favorites awaits, including the ubiquitous tilapia maitos (fish tamales wrapped in bijao leaves), prepared by local families who also display their handsome handicrafts for sale. Hola Vida feels quite busy. It’s probably the most visited waterfall in the area. But Patricio tells us of another nearby attraction: Mirador Indichuris (Indichuris pointview). 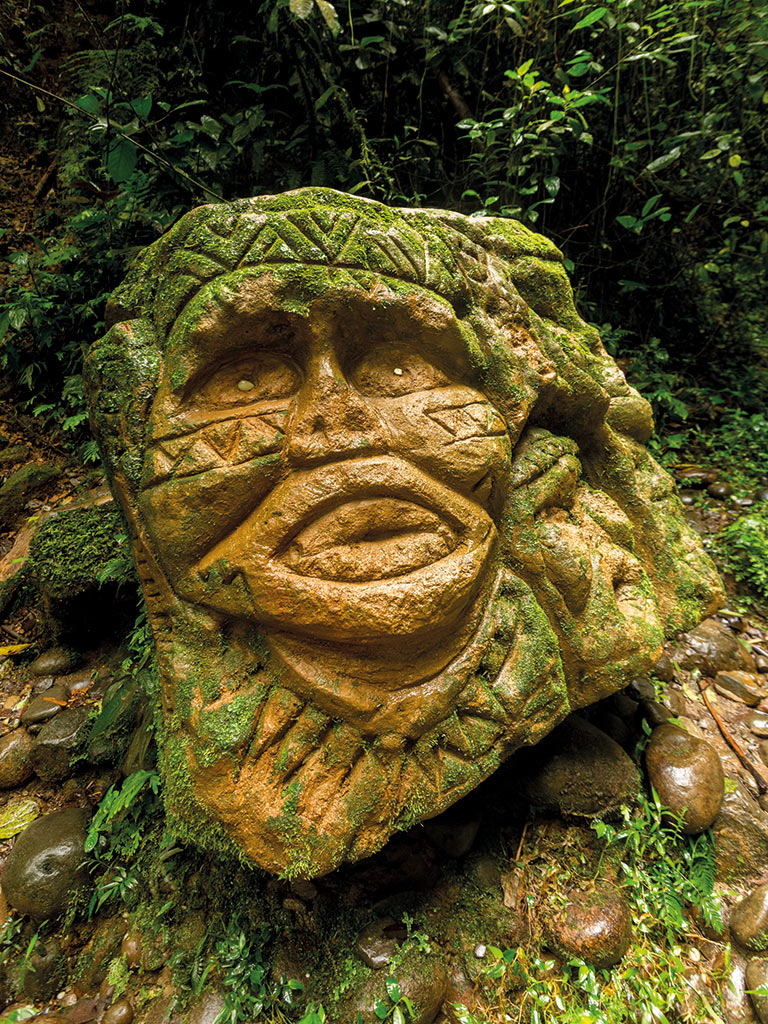 No one knows when and who carved these rocks.

Located a short drive away, in the community of Pomona, the location dominates the view of the meeting point of the Puyo and Pastaza rivers. On clear days, you can also admire the great mountain peaks of the region: mount Sangay, Tungurahua, El Altar and even the Llanganates range. A swing hangs from one of the trees. Not the most secure contraption ever designed, so not entirely recommended, it nevertheless gets many adventure-seekers’ adrenaline pumping.

A face carved into the rock at the entrance of a nearby cave reminds us of what Patricio had told us. These “power sites” have been identified by local communities over centuries. Only at nightfall does the face hide itself in the inky darkness, so that the “protectors” can ensure all’s well in the heart of the forest.