Guardians of the skies: How birds protect Quito’s Airport

An ancient practice keeps the skies above one of the continent’s most modern airports safe day after day. Six hawks, two falcons and two kestrels, to be exact. These avian guardians form part of the team tasked with ensuring the safe operation of Quito’s Mariscal Sucre Airport.

Fauna, mainly birds, in the vicinity of airports have long been identified as a threat to flight operations. In fact, the risk of a bird impacting an airplane ranks as one of the top five risks that lead to air accidents.

With safety paramount in every aspect of the aeronautical industry, it’s no surprise to hear that Quiport has looked for innovative ways to maintain the highest standards of safety at all levels of its operations. 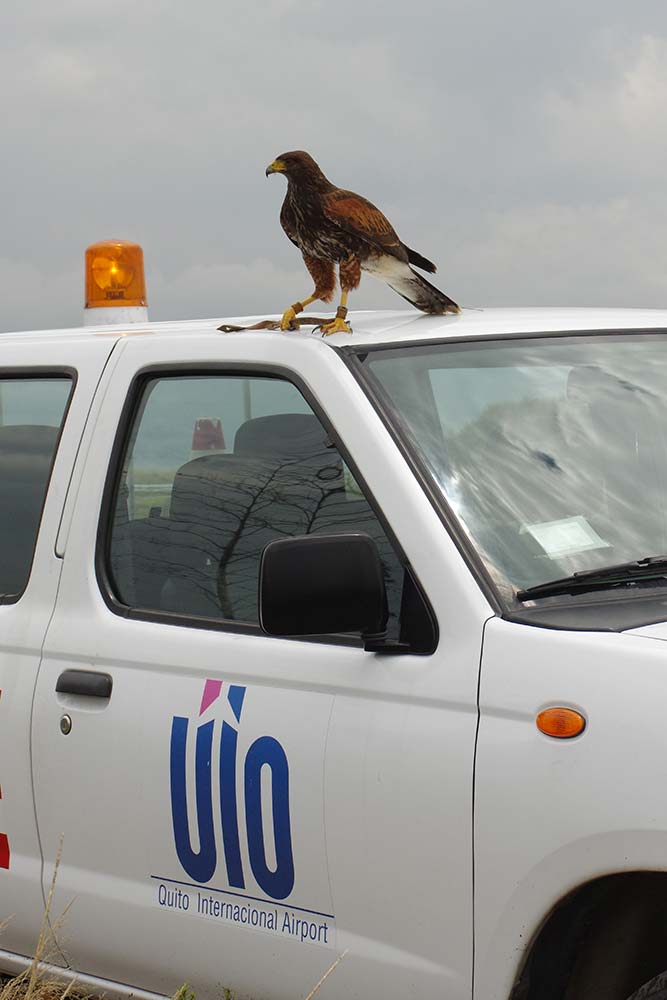 The International Civil Aviation Organization (ICAO) recommends different means to mitigate this danger. These include noise deterrents, fireworks and flashes of light, for example. But one of the most unexpected (perhaps) and effective methods is the use of falconry, the ancient practice of training raptors that dates back to 6,000 B.C.

Few airfields in Latin America have implemented falconry as a solution, however. Quito’s International Airport is a pioneer in Ecuador, employing the innovative system since 2013.

“It took our team about two months to train the birds after they arrived from a specialized breeding center in Germany. They were just chicks at the time,”

“The birds are not trained to kill but to scare off small mammals and especially other birds from the area such as doves, pigeons, sparrows and owls, species that are drawn to the agricultural areas close to the airport by the abundance of food and water.”

The falconers, together with the six birds and two dogs that complement the team, work 365 days a year in different training exercises and dissuasion techniques across the 1,500-hectare plateau of the capital’s airport.

“The falconry system has been very effective since it was launched,” according to Corporación Quiport’s Communications and Press Manager, Luis Galárraga. “We’ve managed to significantly reduce the presence of birds in the vicinity, which means a safer airport for all.”

Next time you travel through Quito’s award-wining airport, see if you can spot these ten sentinels of its skies.