Good Friday in Quito ranks among the most colorful and spell-binding event in the Ecuadorian capital’s calendar. A blend of pageantry and religion that any visitor to the city should witness. The procession commemorates Jesus’s Road to Calvary, his scourging, his sentencing, his crucifixion and his passing: the so-called Way or Path of the Cross (Via Crucis), and its fourteen stations. While the entire week is an allegory of Life’s triumph over Death (Jesus is, eventually, resurrected), it is a curious fact that it is this deeply sorrowful Biblical moment that receives the religious community’s undivided attention.

Sunday’s Resurrection is hardly celebrated here. Good Friday in Quito is also the day in which people eat fanesca, an intense dish that would probably be more appropriate in honor of Sunday’s Resurrection, and not on this day, the height of abstinence and penance: the moment when Christ is laid to rest. In any case, the central event is the Jesús del Gran Poder (Jesus Almighty) Procession, which begins and ends at San Francisco Square. 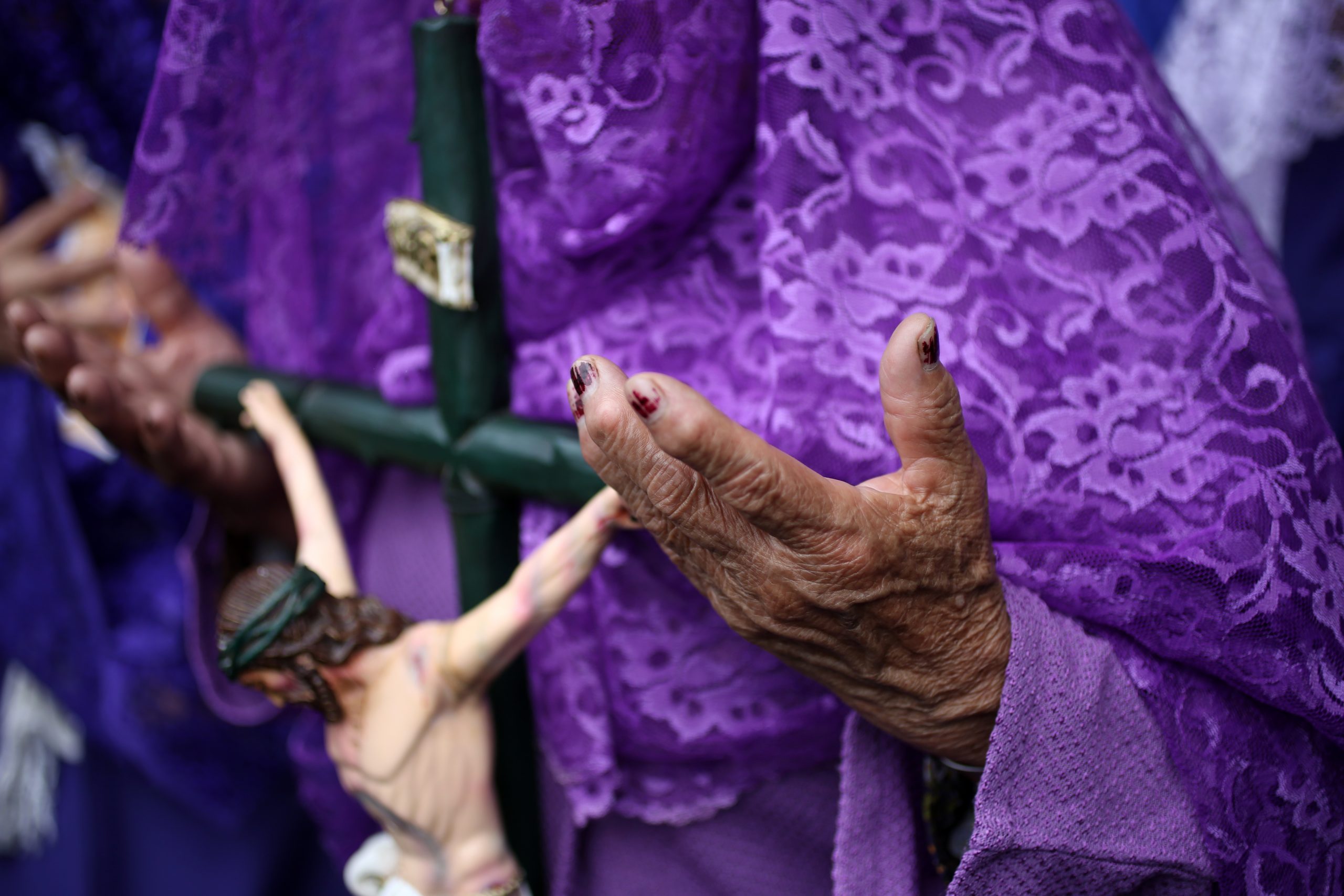 Maundy Thursday officially ends at 10 pm. The Franciscan Convent closes its doors after a full day of liturgical acts (whose “main dish” is the celebration of the washing of the feet, commemorating the Last Supper), when the faithful can go home to rest in preparation for Quito’s Holy Week grand finale: the “Jesús del Gran Poder,” or “Jesus Almighty,” procession. For Jaime Beltrán, however, shutting the church’s doors is anything but closing time.

As the heavy gates shut, Jaime quickly heads to an ancient storage space where halfcentury-old planks are left idle for most of the year. Time is essential. It will take about 4 to 5 hours to clean them (with a water vacuum cleaner) and assemble the three platforms, or andas, that carry the devotional images of the Virgin, the Lord, and Saint John the Baptist through Quito, leading the thousands of faithful people. Jaime is the only one who knows how.

“I’ve tried to teach the others,” he says, somewhat apologetically, “but it’s not easy… you need to want to take on the responsibility.” Washington Moreno, who gives out the penitential garb for the cucuruchos, nods vehemently standing at Jaime’s side. Under his breath he adds that “nobody is as devoted as Jaime when it comes to assembling the ‘andas’.” 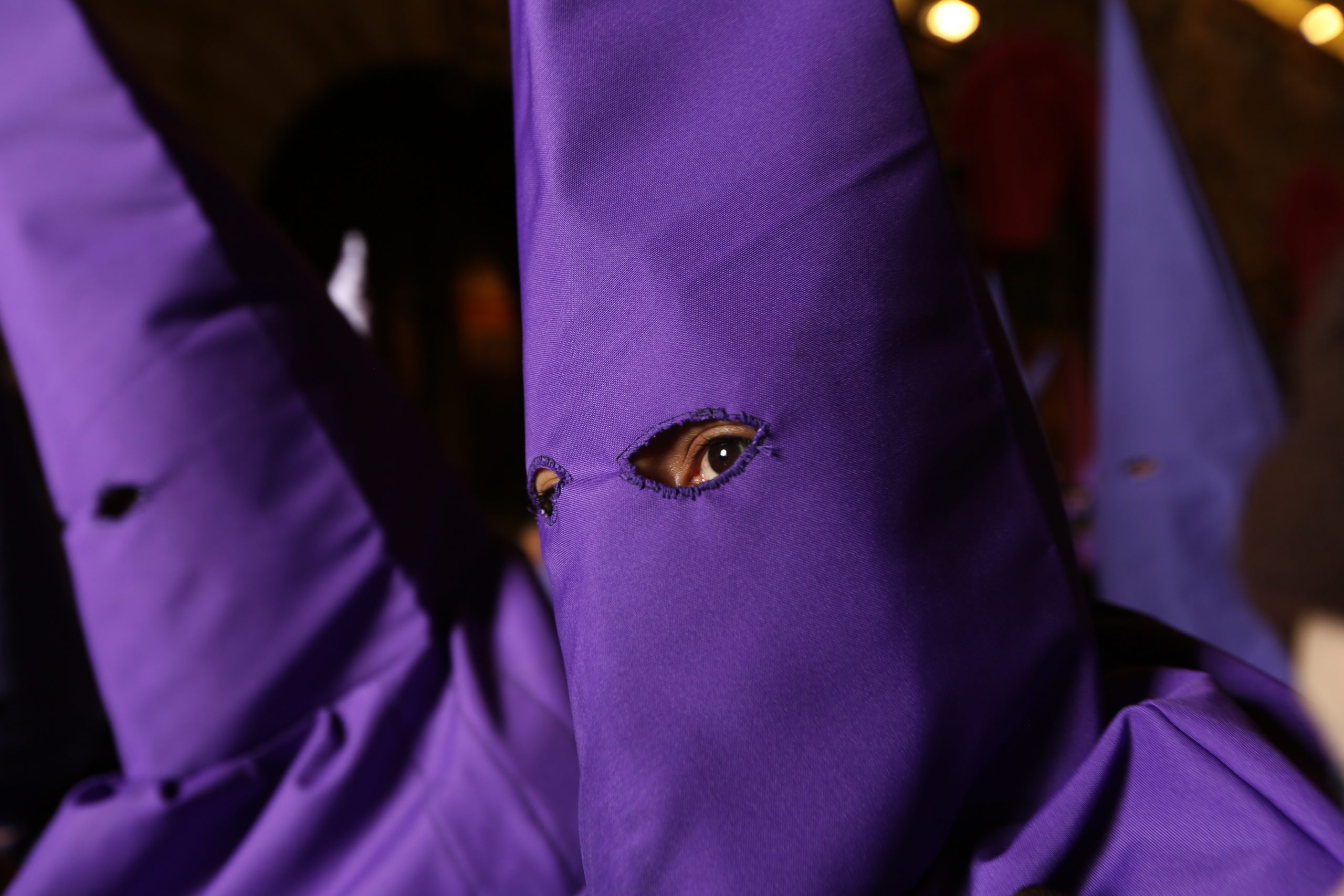 The stations of the Via Crucis 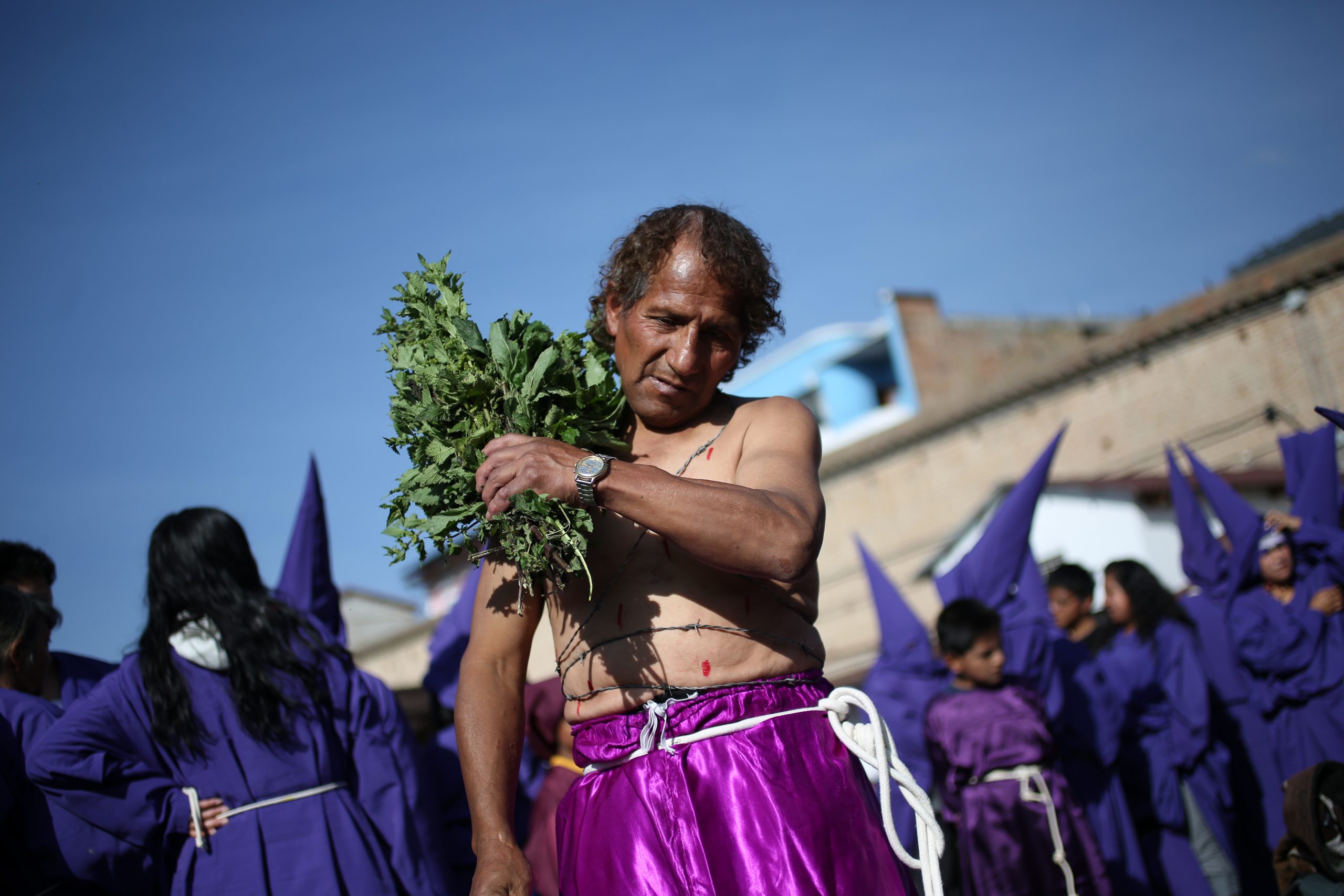 Washington Moreno has been handing out the same 1,000 purple tunics, head cones, and face coverings to participants since the 1990s. He has the entire year to carefully make sure each piece of garment is clean, not ripped, and not stained… and he has a whole year to fix them, or to replace any piece that was not returned. “This is very important,” he explains, “because people get angry if we don’t give them everything the way it should be.” He places the paper (or plastic) cone-shaped headpiece inside the similarly-shaped fabric, and neatly inserts a folded tunic and friar’s string inside. Starting at 8 am, he begins to hand each bundle out to the registered Cucuruchos (another 500 unregistered participants will join them, bringing their own costumes).

“It’s a beautiful feeling. I get to see them before they dress and hide their faces to express penitence and sorrow for the Lord. I get to see their faith in their eyes. Because they all come here to recuperate their faith, and I hand them something that is vital to them on this special day.” 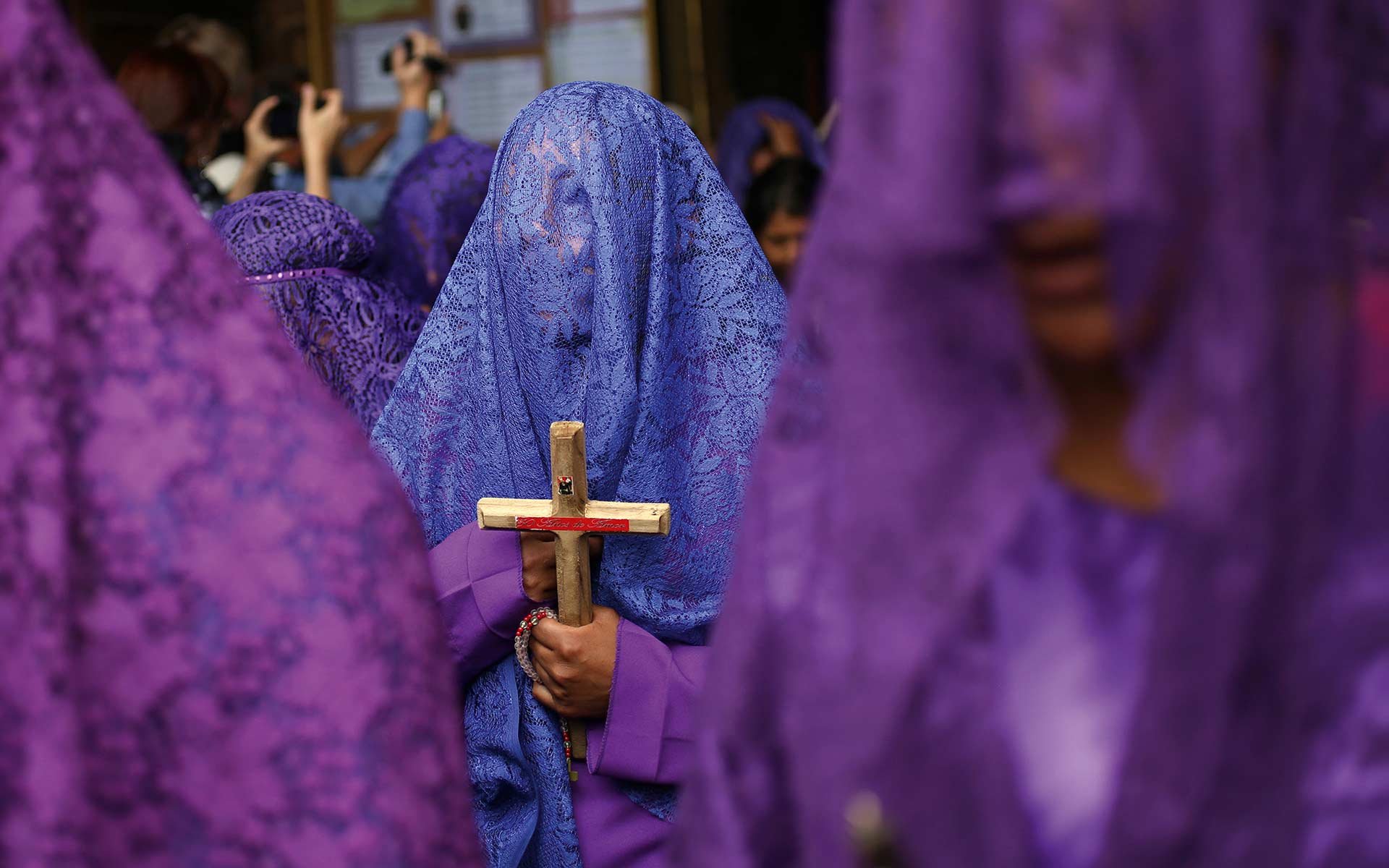 The Cucurucho is the Good Friday in Quito procession’s central figure, and he cuts a foreboding presence indeed. His silence and anonymity are an intrinsic part of his demeanor, complemented by the eerie dark purple robe with the characteristic cone on his head, and his face totally covered, but for two holes around the eyes.

The original figure is said to date back to the Middle Ages, when a priest would order wrongdoers to stand just outside the church day and night for everyone to see them. Covering their faces could have then been intended to somehow alleviate the humiliation, but today the effect is rather impressive; it has come to suggest the seriousness of the sins committed. Today, cucuruchos are interpreted as anonymous penitents, who seek anonymity in order to emulate Christ’s humility so as not to individually flaunt the fact that they are in the process of repenting; a display that could itself be seen as worthy of repent.

Although cucuruchos were traditionally men, in order for women to also avoid flaunting their act of faith, in recent years they too have been allowed to be cucuruchos. Until around six years ago, the only option for women was to participate as Verónicas, the cucurucho’s traditional female counterpart. They wear see-through veils over their faces, personifying the Biblical woman who washes Jesus’ face in pity as he tortuously makes his way to Calvary.

Around 10:30 am, the Good Friday in Quito procession begins in earnest: the cucuruchos walk through the “passageway of anguish” (camino de las angustias), a low archway that connects the Friar’s School to the convent courtyards and eventually to the church; and assemble inside the church where special police agents are standing ceremoniously, guarding the religious icons. By 11:30 am, the platforms are carried out to the atrium, where an audience large enough to rock a stadium concert has gathered, waiting for the Reading of the Sentence. 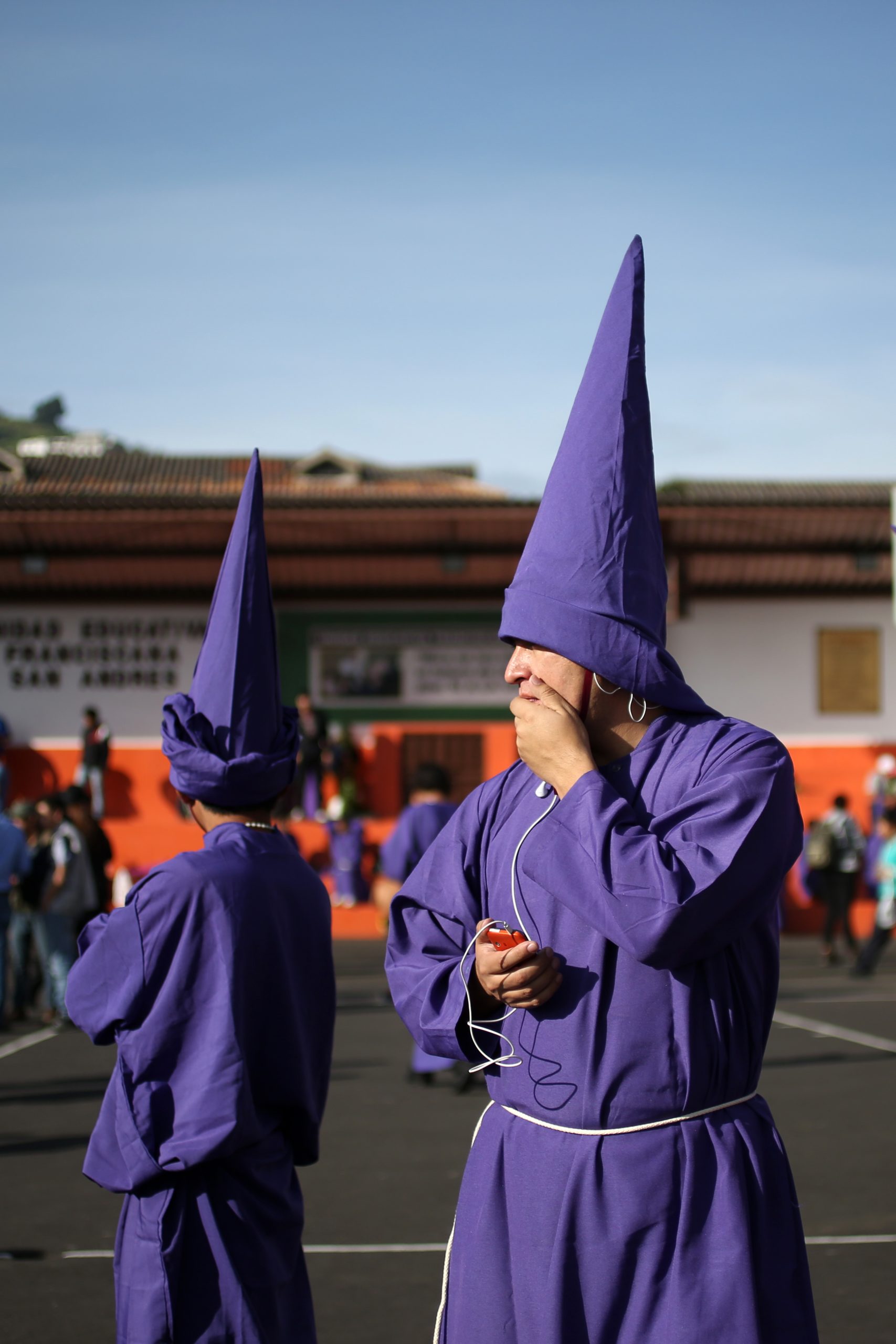