It doesn’t matter how deep and wide you explore Ecuador: no fanesca is alike, no two recipes are the same.

Most fanescas respect the basic ingredients (the famous twelve grains and the dried fish), but some use alternatives to make it either more “gourmet”, more traditional or less heavy; there are even vegan options (or Manabí-style versions… with an extra portion of peanut paste!). What they all have in common, of course, is that each has its own story, and its own secrets.

When talking about the origins of fanesca (Holy Week’s favorite dish) there are many theories: that a certain Juana prepared it first and enamored the city’s highlife with it —which led to the name “Juanesca “… (which, later, lead to the name “fanesca”). That the Spanish brought something very similar and were forced to improvise a version with the produce they found in the New World. That the ingredients represent Jesus Christ and his 12 disciples. That it was originally a pottage of grains inspired by the local ancestral cuisine to celebrate the sprouting of the year’s first seedlings… 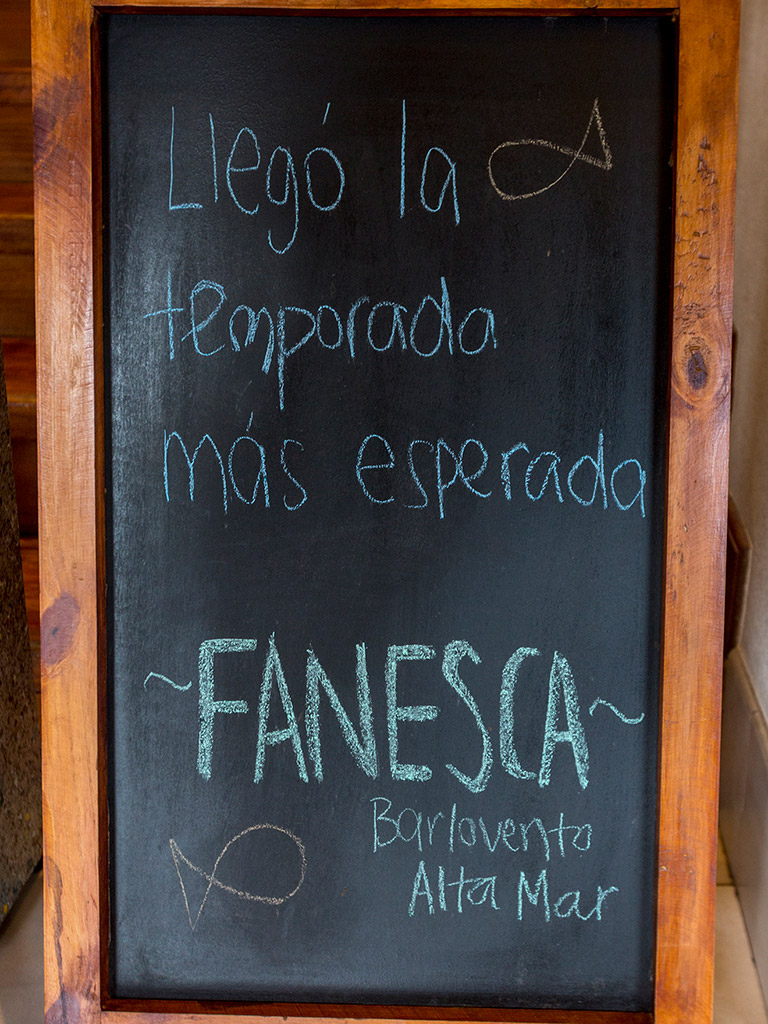 Fanesca is very important for Ecuadorians: through it we express gratitude for the abundance of Mother Nature…

All these stories may have their truths. But what they share is that a dish with such a strong identity is, was and will always be our way to acknowledge the life’s cycles, to revel in what’s to come and think of what has passed…

The most beautiful thing about this dish is that it is an ideal pretext to honor our living heritage: everyone’s grandmother’s deepest secrets, getting together at home with the entire family, smelling the fanesca being prepared in every corner of the house, as well as the stories and memories we all share as a nation.

Fanesca is much more than a plate of food, it is food that gives us identity and nourishes the the senses and the soul.

They say the best fanesca is always the fanesca prepared at home during Holy Week. So, we embarked on an adventure through Quito to find the second best. With such a wide offer, it was not an easy task to find the best fanescas in Quito. The dishes range from 4 to 15 dollars. All of them have their fame, some have won awards for their quality in traditional competitions and others have participated in the so-called “Fanesca Trails”, promoted in newspapers and the like.

After trying many versions, we bring you the ones that, we felt, took us somewhere special, and essentially Ecuadorian. 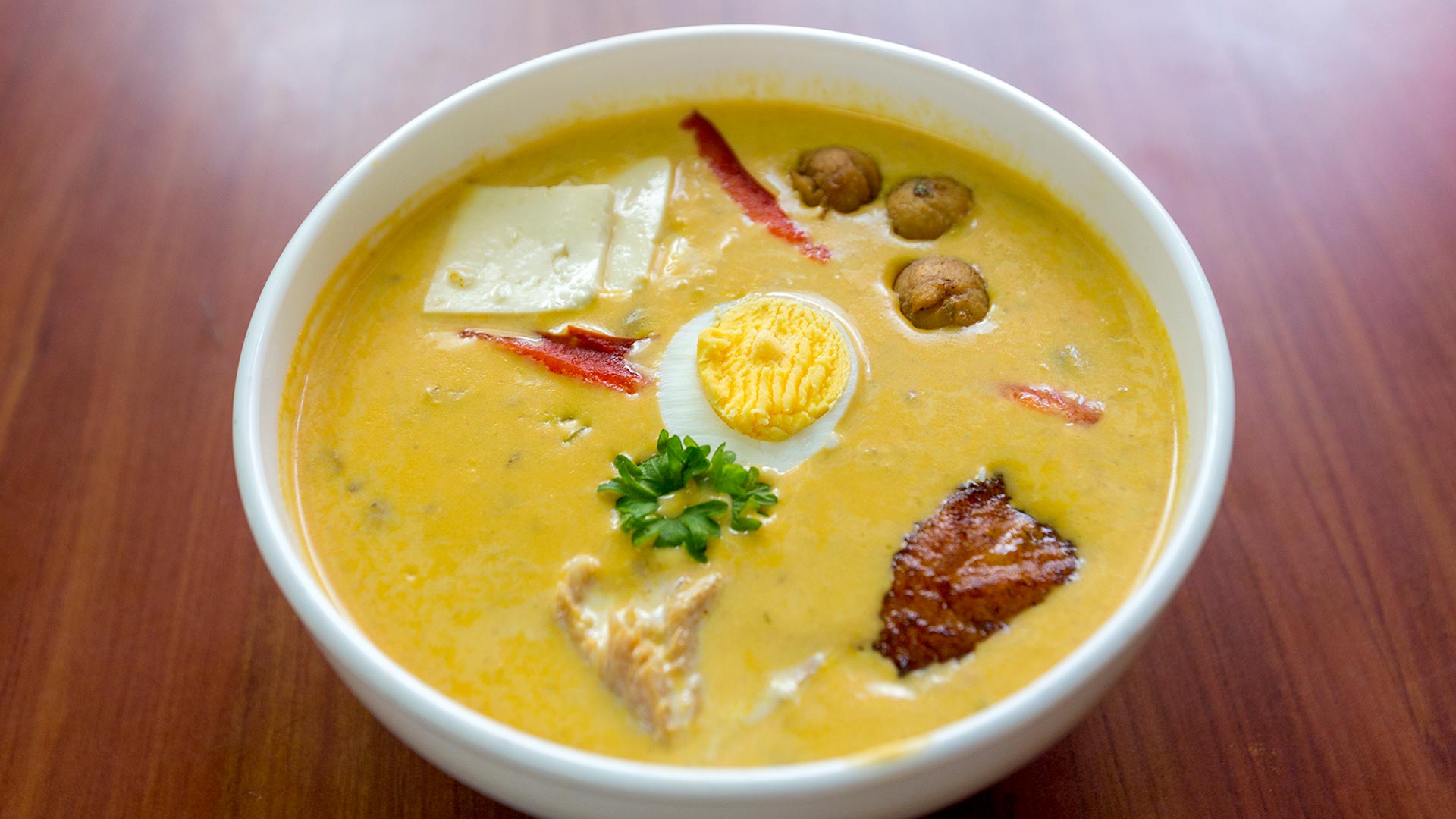 For those who don’t really like the fish in fanesca, this traditional restaurant is the place you’re looking for. Although it has fish, the taste is very mild because it uses only the fish stock during the pottage’s preparation and a portion of dried fish is served separately. The dish comes with higos con queso (Quito’s classic figs-with-cheese dessert).

This fanesca is thicker than usual. Doña Olga Mullos says her secret is a double dose of pumpkin. “But not any pumpkin: the bright orange ones give the taste.”

The original recipe is her mother’s, who opened “El Palacio de la Fritada” over 40 years ago. She still comes to the kitchen dressed in her apron, a mesh in her hair and a big smile, ready to supervise the operation! That is why this recipe conserves that unmistakable taste of home. 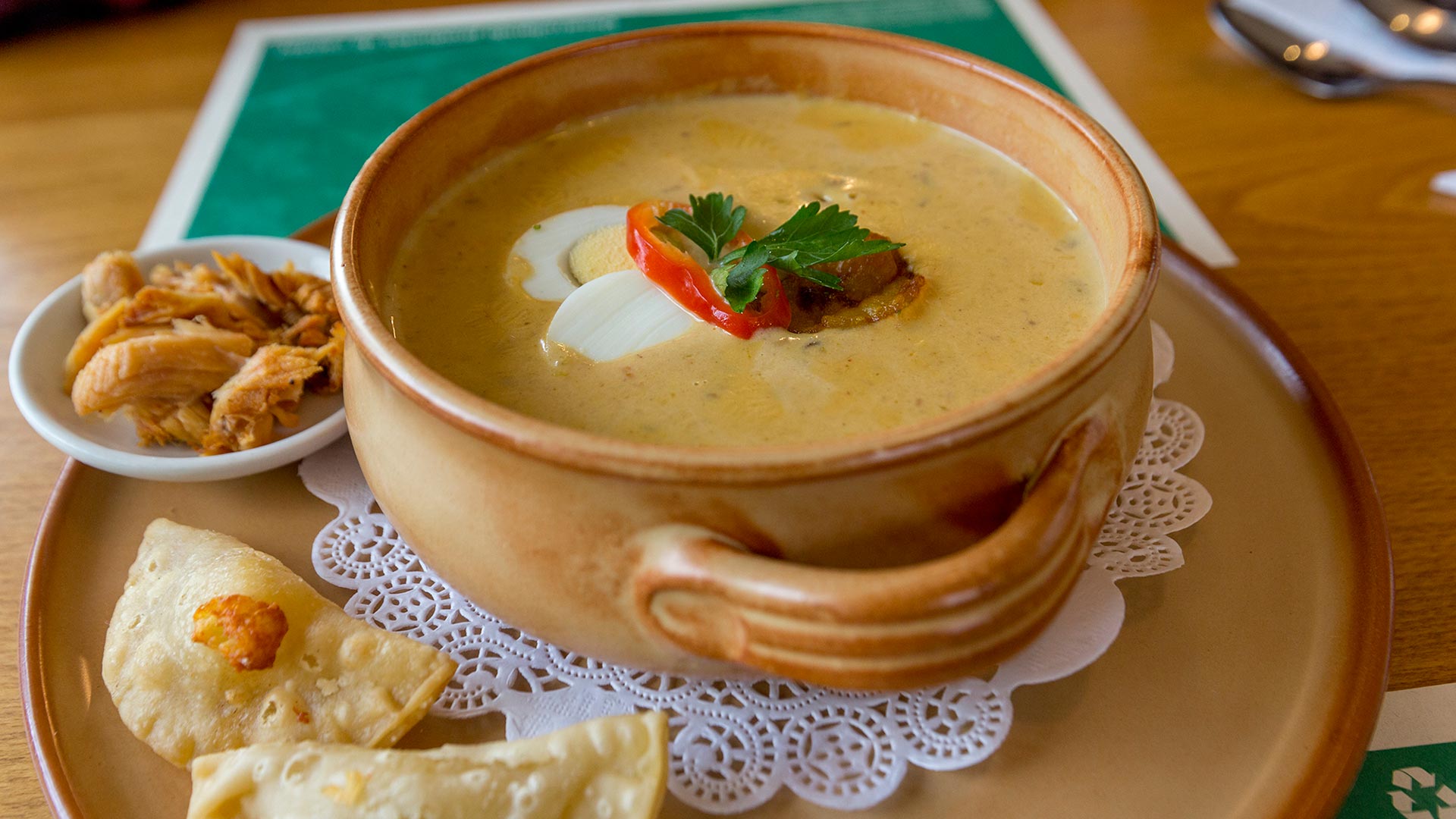 The word-of-mouth reviews this fanesca has earned through recent years make total sense. It is excellent: light, with an incomparable taste of peanuts, served in clay dishes with all the corresponding garnishes, except the molo (a special mashed potato made with the native “chola” variety). Honey and Honey has offered the dish for eight years now during Holy Week season.

The fish that accompanies the dish (also served separately) is “merito”, a white fish similar to sea bass with a strong flavor (if you like fish, you’ll love this version).

You can’t have fanesca without dessert 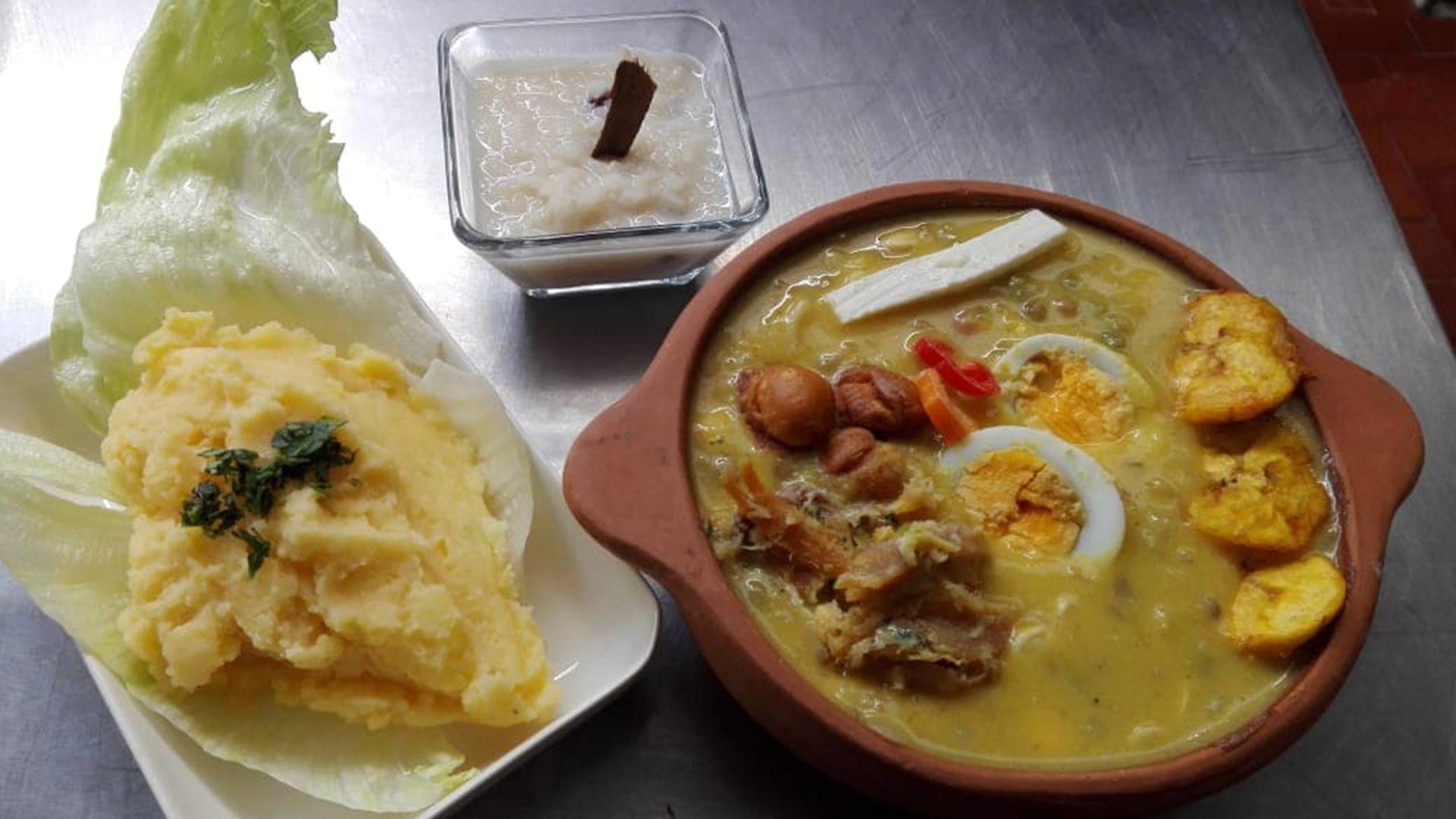 It is full of culinary secrets: the chef has a special way of draining the fish so that the flavor isn’t too overpowering; every grain must be cooked separately and the stock is stored to be used later in the preparation.

Chef Paúl Araque learned these tricks (in theory and in practice) and has incorporated them into the traditional recipe, offering a fanesca full of culinary savoir-faire and homegrown flavor in equal measure. A difficult combination to achieve… and to forget.

It is served with all the garnishes: molo, arroz con leche, sweet plantain, hard-boiled eggs, empanadas, chili peppers (beware, they may seem like red pepper but are hot and spicy), cheese, pickles and dried fish. In addition, the restaurant offers home delivery upon request: heritage, experience and great taste at your doorstep. 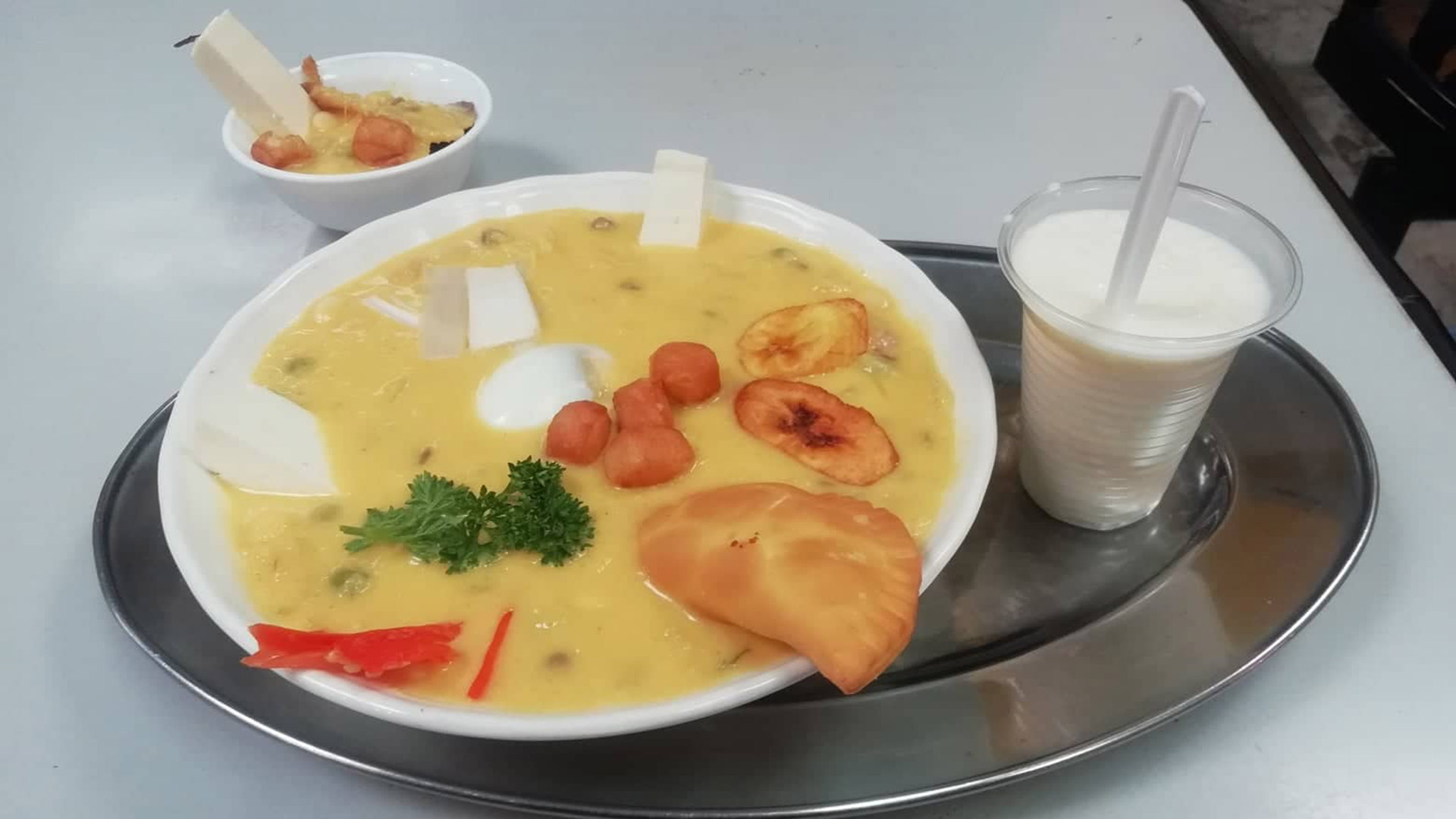 Let’s start by saying that eating at a market already gives you a sense of place difficult to beat: the market vendors calling everyone “my beautiful” (mi bonito), “my queen” (mi reina), the negotiations for an extra “yapa”, the running about from one stall to another in search of whatever the client may be asking for. Few scenarios are more conducive to understanding the social dynamics of this city.

If we add a fanesca to the mix, like the one prepared by Nancy Guaraca Padilla at “Corvinas Narcisa”, the thin line between reality and fiction seems to blur completely.

It is the perfect atmosphere for a dish that knows how to keep its secrets: the fanesca itself has an unmistakable flavor, which perhaps comes from a native herb or the lard she uses). But secrets shall never be divulged, we know that well.

With a glass of rice and milk, the popular saying here is fulfilled: barriga llena, corazón contento (“a full belly, a happy heart”). 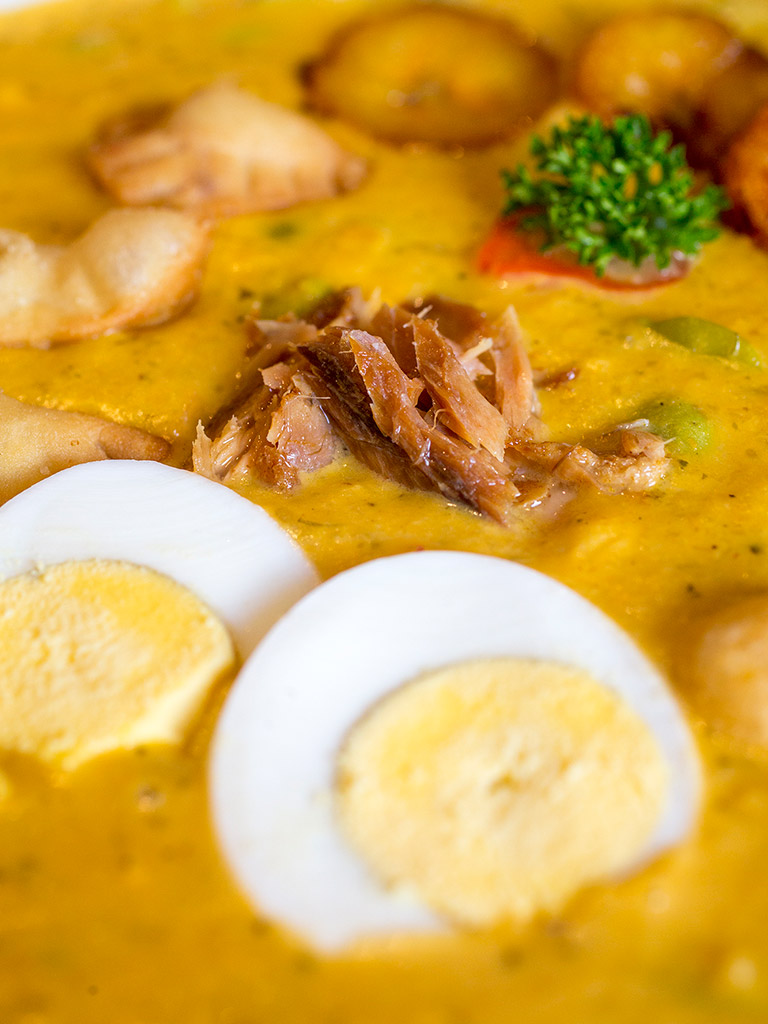 This fanesca is served in wide-but-not-too-deep dishes and its presentation is perfect. Excellent consistency, thickened with zambo squash and not pumpkin and all the grains are previously peeled, one by one.

That is why the recipe is so much lighter than others: the husks and peels of certain grains make the soup heavy.

Barlovento has been preparing fanesca for 30 years now. They serve it with empanadas, egg and cheese but without the chili strips.