We visited Bambú Bar to share with their chefs and culinary consultants our quesitons about Fanesca, the signature dish of Holy Week in Quito.

There is nothing like it in the world. The fanesca soup is one of those dishes that you just can’t invent twice, and one of the reasons why Easter week has become rooted in the identity of the Quiteño. We could say that eating fanesca during Easter is a custom that every true Quiteño treasures as the most emblematic tradition they honor during the year. And of course, mom always makes the best.

The fanesca begins on farms and fields across the country, as the ingredients of the soup, unparalleled in variety and quantity, are gathered. Marketplace sellers organize their stands so as to make the purchase easier. And buyers then return home with baskets full enough to feed an army for weeks. If lent was conceived as a period of intense fasting, with the intention of reducing the penitent to nothing but skin and bone, in Ecuador this dish is conceived to preclude such a fast, and flagrantly at that.

The ingredients put together are, without a doubt, too much to handle for the organs of a body in the process of a spiritual cleansing.

The mystery surrounding fanesca, especially due to the fact that no other country shares the dish, or the custom, has resulted in a series of historical (and not so historical) version. One of the most common story affirms that it was invented in colonial times by someone named Juana, in a long-lost hacienda of the high Andes, initially christened ‘Juanesca’. But Mauricio Acuña, reputed chef and culinary consultant at Theatrum, says there is a dish in Portugal that is very similar, made with beans and cod (bacalao).

The other obvious origin is pre-Hispanic, which traces back to the celebration of Mushuc Nina or The Day of Fire, a ritual that marks the beginning of the Andean year in the month of March, when grains are harvested. The dish associated with this origin is called uchukuta in Kichwa, meaning tender beans cooked with chilli and herbs. Like fanesca today, it purportedly included squash and pumpkin, peas, broad beans, mellocos, corn and beans, in the recipe, all harvested at the beginning of February when the Pawkar Raymi festivities take place (a kind of Spring Fest). It is believed that uchukuta was served with the meat of wild guinea pig.

During colonial times, the Spanish took advantage of the local cultural manifestations and added their Catholic symbols. Fanesca perhaps became the main dish at Easter due to a coincidence of time of year. There were so many ingredients (just in terms of grain variety) that one could easily pick twelve ingredients to represent the twelve apostles and twelve tribes of Israel.

The fish then symbolized Chris (although there are families that prepare this dish without fish, for vegetarians and children, who tend not to like the strong taste of the dried cod).

The idea, in the end, seems to be that everything but meat counts. And that accounts for the variations from family to family.

Irene Ribadeneira, owner of Bambú, is and expert chef. But beofre her it was her mom, who founded the place and amazed the Quiteños and travelers with the most delicious traditional food out there!

Its origin and significance are of little importance, however, when it comes to putting the dish together. Every family has their own secrets for preparing fanesca (peeling every type of grain, even lentils, for example!) and grandmothers, present or in spirit, have the magic to gather entire families together to prepare and share the tradition. Some peel the grains, others slice onions, others kneed balls of flour, others cut cheese…. Those who wish can have seconds. But you have to leave space for the molo (mashed potatoes served with lettuce, slices of cheese, chopped scallions and chili) and dessert (figs or rice pudding). It would be an understatement to say that everyone is full by the end of the meal! 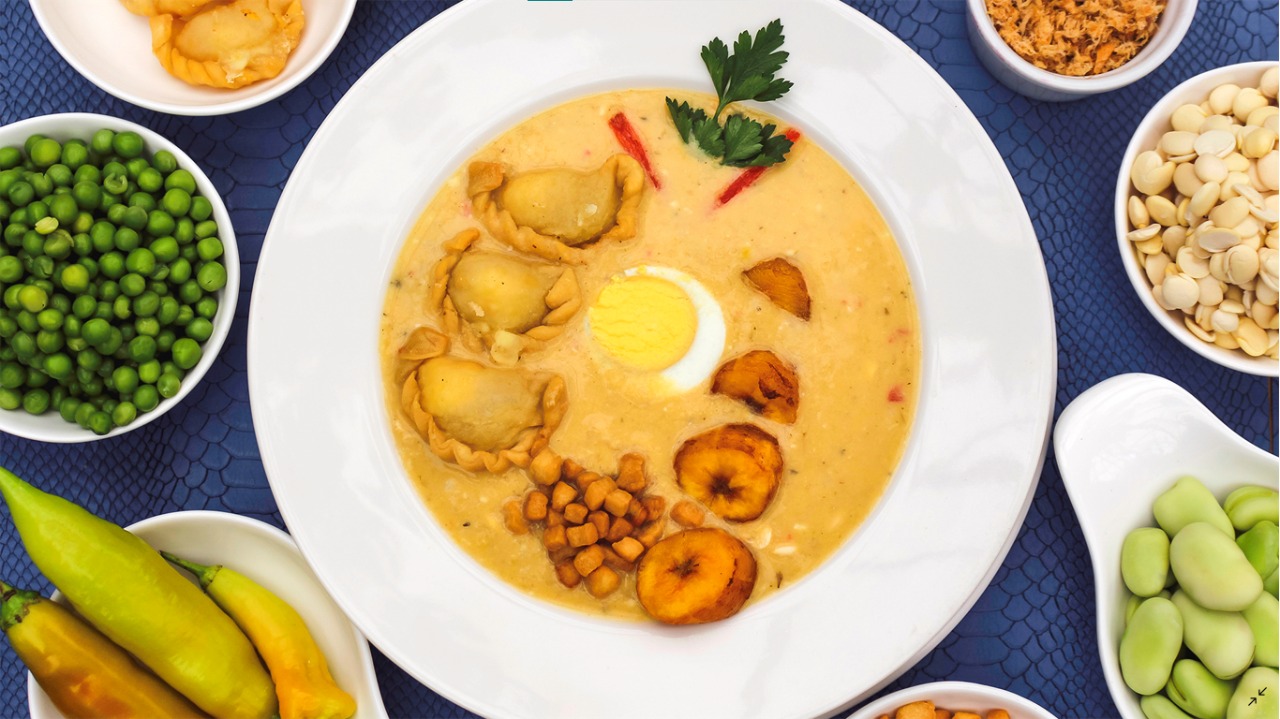 As you can see from this recipe, fanesca spares no ingredients. It is a shameful attempt to include everything.

In a large enameled iron pan heat the oil and butter. Add the achiote, onion, garlic and cumin. Add the peanut sauce and simmer. Add the squash and pumpkin. Leave to boil. Bit by bit, add all the grains. If the mixture becomes to thick, add milk until it reaches the desired consistency. Add the fish (some versions add the fish before the peanut sauce). Garnish.