Esmeraldas Chef’s Table: The flavor’s on!

Esmeraldas grabs you by the senses: it is music to the ears, fascination to the eyes, and of course, delicious to the palate; a cuisine that brings together three continents and an example of one of the least known “mixed heritages” in the Americas, joining the culinary sensibilities of indigenous Americans with the African for over four centuries… Esmeraldas, in its food, is its own world!

“No matter the state of the financial crisis in town, the tables are always full,” says Johan Garzón, a true-blood Esmeraldeño. “We eat well, we eat out, we share the moment with joy no matter how difficult the times,” he tells us.

Dining out is deeply ingrained. In the city, on the beach, in river towns long lost amid the mangroves… one notices it immediately. Especially at night.

Many of the favorite places Esmeraldeños seek out, open only once the sun goes down, and some remain open until it comes back out again, like the well-known “dawn cevicherías” with which at some point or another all Esmeraldeños have ended a good night out with friends.

There are landmarks like El Capitán, or Oh mar! in the city of Esmeraldas at Las Palmas beach or El Sazón de Tía Sixta, where dishes are flooded with coconut milk and seafood is piled up on plates, soups and casseroles; restaurants like Cevicangre in Vuelta Larga de Ríoverde, or the small stalls at Bunche beach on weekends, where you choose the crab or squid you’d like to eat from the bucket… or at the “artisanal” port, which offers, although not the most picturesque of tables, that deep-rooted Esmeraldas flavor that differentiates this cuisine from the rest of the country, and anywhere else on earth. Discovering Esmeraldas begins at the local eateries.

The secret (and not so secret) ingredients 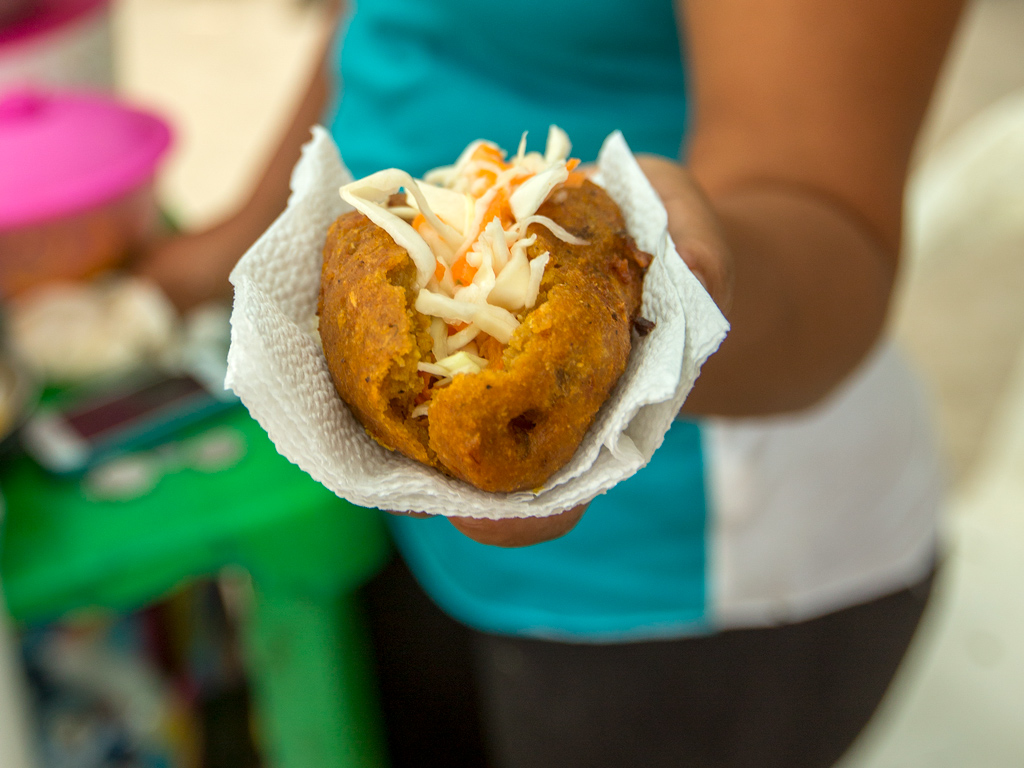 For most Esmeraldas natives, a dish must have “verde”: this is a corviche. Photo: Jorge Vinueza.

“It can’t taste like jungle, and a bad tapaodoes,” says Moisés Perlaza, our waiter, taking a chair from another table and sitting down to join us. “The herbs must strengthen the taste of the fish,” he says… Food is certainly his business, and he explains the subtleties of the tapao, one of Esmeraldas’ signature dishes. Moisés works at Lider Cevichería, one of the best ceviche dives in town, and his passion for food has him revealing culinary secrets to perfect strangers like us.

Being meticulous in the kitchen makes a difference, especially in a city that every Saturday morning receives mountains of herbs at the riverfront. There are few culinary cultures in Ecuador that make use of so many in a single recipe. Because in Esmeraldas, it is not merely cilantro that flavors a dish, like in most other Ecuadorian coastal kitchens (cilantro is actually generically called “hierbita”, little herb). Here, several herbs are combined, including oregano, mint and basil, as well as two unique forest specimens that few other cuisines in the world use: the chillangua (a “black basil”) and the chirarán (a relative of coriander)… you can find them at the market or shops on Pedro Vicente Maldonado and Piedrahita).

But we cannot really speak of food in Esmeraldas without mentioning coconuts. Throughout the province, this tropical fruit seems to grow like grapes. Trucks arrive from Quito and Guayaquil to places like Borbón to fill nine cubic feet to the hilt and take back as many coconuts as possible. And yet there is coconut for everyone. Not only to season recipes, but to quench the thirst of anyone who needs it with the famous “pipas“, tender coconut with a hole on top to sink in a straw and taste its sweet water.

It’s the official drink, offered in everything from frappé glasses along the beach to plastic bags at traffic lights in rural towns. It is sometimes a freebie on the lunch menu and during sunny afternoons, arrives in food carts that make their rounds in parks and squares.

Coconut shavings, in fact, appear in the least expected places, as is the case of the majaja: a pattie cooked in a tuna fish can mixed with mashed up corn! But the true flagship dish of Esmeraldas cooking, which the rest of Ecuadorians recognize as the province’s most representative dish, is the encocao: a several-hour reduction of the coconut’s “first milk”. The process, although traditional, resembles the highest of culinary arts, and imbues all manner of seafood or fish with its incomparable sweet flavor.

Coconut in the morning, afternoon and night, and of course, as a tasty snack or desert, in the form of delicious cocadas: grated coconut with brown sugar!

“From the sea to the table”

Elegant street salesmen walk from store to store and restaurant to restaurant flaunting bags of freshly harvested vegetables. Sometimes someone will appear with the small conch (less than 4.5 cm in diameter), a feeble out-of-season lobster, or some endangered species whose consumption is prohibited… The plight of stopping them in their tracks is a challenge (and thanks to the efforts of the authorities, most joints are well informed of the misdemeanor).

But Esmeraldeños have made it a habit to buy from the street. A man walks past with a bundle of fish or a bag of sea prawns. And another comes to him to negotiate, ready to sauté his fancy. “When I see someone with a good size shrimp, I make my ceviche right then and there; I call him from my window and I don’t even wait for the water to boil… I simmer the shrimp lightly with a little oil, salt and some lemon and that already releases the ceviche juice. I squeeze more chilled lemon, and add cilantro, onion, tomato… and voilà,” Moisés is full of house secrets to reveal to the world.

It is the word of the street… or shall I say, the word of the beach… throughout the province everyone says the same thing: “what you eat comes from the sea to your table”.

From the shrimp plantain bolón in Tonchigüe, to the octopus soup or prawns drowned in a garlic and coconut sauce from Estero del Plátano, or the “tres sin sacar” seafood plater at Bocona de Ostiones to the grilled prawns at the beach in Mompiche, or ​Oh Mar’s seafood platter, the classic ensumacao, at the capital Esmeraldas’ Las Palmas… every beach seems to have its dish! 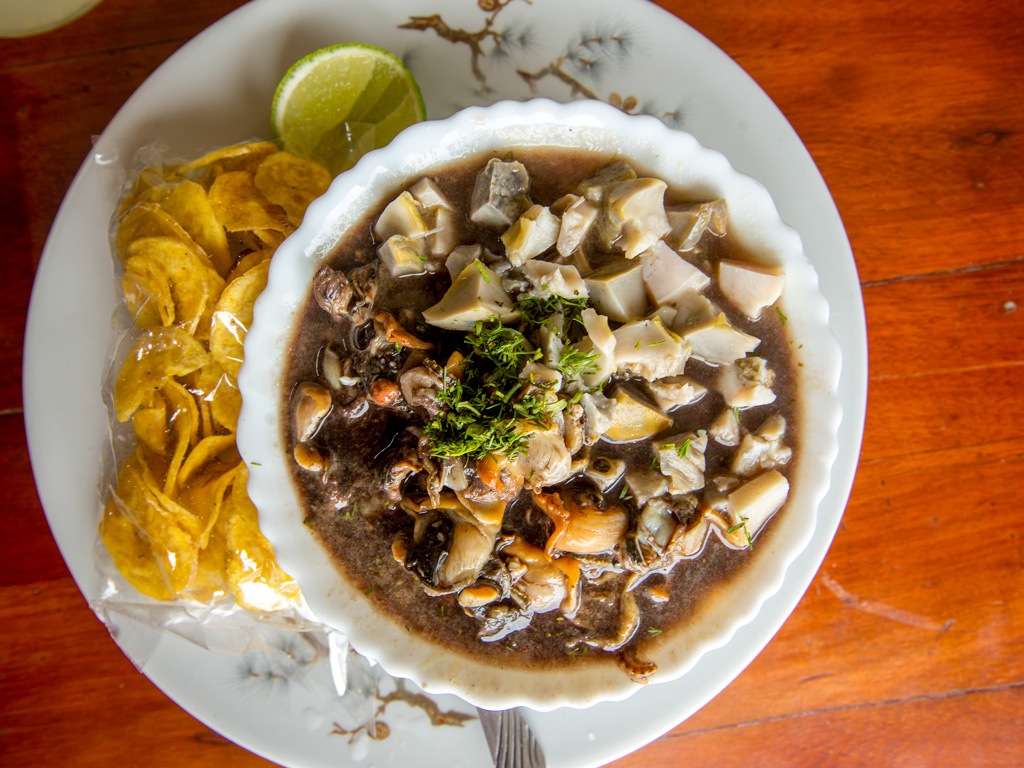 And it is not only the sea that comes to the table, but the river as well, because everything in Esmeraldas possesses this hybrid flavor. Mangrove black conch, river shrimp (also called minchilla), clams, and the endemic blue crab, with its striking sky blue shell that, although less meaty than the more common red crab, is one more ingredient that makes Esmeraldas cuisine unique in the world.

And as if fish and crabs were not enough, there is a love of meat here… which no chef in their right mind would hesitate to include in the recipe. Unexpected dishes are born of the mixture, such as the tapao arrecho or the tablitas, which you can taste at Nuevo Amanecer, a small restaurant in Las Palmas beach: a seafood platter “garnished” with porkchops! Inventiveness is everywhere. It is perhaps what most gives life to a culinary culture that breeds and broods outside the kitchen…

The black conch is a culinary emblem of Esmeraldas; for millennia, it has been harvested from once extensive mangrove beds throughout the province. The conch ceviche is a classic. Don’t be put off by its color, though: it’s delicious in spite of it! The secret is to open the shells (well washed and still alive) carefully to preserve the ink. The rest comes from the lemon, chopped onions, coriander and tomatoes… Try it at: Cevichería Líder (Calle Colón between Piedrahita and Cañizares) where there are other fabulous ceviches to revel in: pateburro, almeja (clam) or oyster crab (jaiba ostión).

The tapao is one of Esmeraldas’s most important dishes. So much so that it is difficult to find and recommend it outside a family home. The flavor of the dish is concentrated in the large white leaf that covers the fresh fish as it cooks, mixed with chirarán, chillangua, basil, oregano, garlic and salt and sliced sweet plaintain. There is also the tapao arrecho that mixes pig, meat and chicken, with the fish. Try it at: Restaurante Jututo (on Calles Simón Plata and Barbizioti, at Las Palmas Beach in Esmeraldas)