Slightly over one million inhabitants in Ecuador define themselves as indigenous, a curious coincidence considering that a similar population was estimated to exist when the Spaniards arrived in these lands. ¿No population growth in five centuries?

The vast majority of people that identify themselves as indigenous, both five hundred years ago and today, have inhabited the inter-Andean valley. Twenty percent (over 200,000 people defined as indigenous) live in the Amazon and only 8%-10% inhabit the Pacific Coast. These are mainly rural populations (over 70% live outside cities). On the other hand, the Afro-Ecuadorian community also has a population of around one million people, the vast majority of them (75%) located on the Coast. 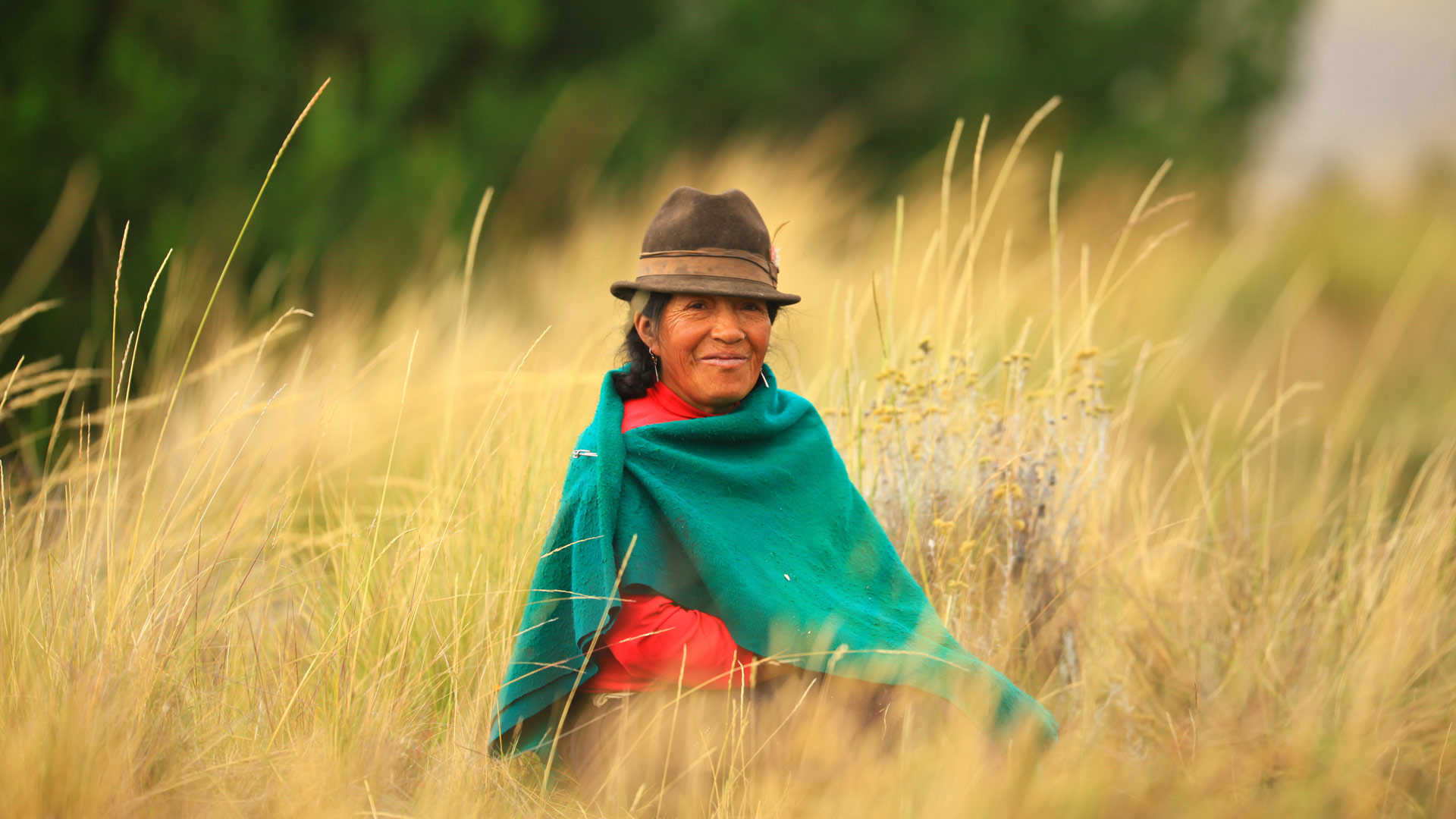 For centuries, the indigenous identity responded only to race, as it was perceived as a homogeneous group by the part of society that excluded it. But a modern process of inclusion – which coincided with early anthropological studies; the first indigenous political parties; even graffiti on city walls that stated “I love the part of me that’s indigenous” (amo lo que tengo de indio) – twisted the prevailing concepts of prejudiced, dominant societies of old, opening way towards a new vision of diversity based on culture.

The Kichwas divide into an array of ethnicities, each with its own territory. They may share a single Pan-Andean language, but every group distinguishes itself through specific cultural features, some of which date back to before the arrival of the Incas.

To base difference on culture offers its share of subjectivity, but it also reflects certain unequivocal realities. One of these is the existence of different languages throughout the country.

In 1998, this cultural identification process led the Ecuadorian government to define itself as a Plurinational State, which formalized the existence of various nationalities within our territory. Political weight was granted to indigenous peoples who identified themselves not by their similarities, but by their differences and, in many cases, by the specific territories they occupied.

Concepts seem blurred. Peoples, ethnicities, nationalities… what is what?

The 2008 Constitution added to this idea of a “plurinational state”, that of an “intercultural state”, which further muddled concepts. Ecuador officially recognizes 14 nationalities, but there has also been a push to dig deeper and identify “cultures” that do not meet the same criteria as that of nationalities. Thus, we begin to direct the issue of cultural diversity towards the ethnic.

In Ecuador today, there are nationalities we can consider to be ethnic groups: Shuar, A’i Cofán, Siekopai, Tsáchila… But there are also ethnic groups that are not nationalities, such as Afro-Ecuadorians or Montubios, who are not “native peoples” but identify themselves as cultural groups in their own right.

In addition, there are ethnicities within nationalities. That is the case of the Kichwa. In the first place, there are Andean Kichwas, who are culturally distinct from Amazonian Kichwas, though they speak the same language. And the Kichwa from the Andes are not considered a single culture, but many: some are well-defined, like in Tungurahua (Kisapinchas, Salasacas, Chibuleos and Tomabelas…), and others are less clear cut, including the Kitukara (from rural Quito) or the Panzaleo (in the province of Cotopaxi). Faced with these new cultural concepts, ethnic organization requires us, at times, to study the past; at times, to engage in an honest process of cultural re-evaluation.

To keep things simple, it may be safe to consider all nomenclatures as “ethnicities”. There could be hundreds. If we dig deep enough, there probably are.

Ancient languages tell fascinating stories. The Awá and the Chachi ethnicities live in the same great jungle of northern Esmeraldas. They do not speak the same language, though they both speak variants of an ancient pre-Columbian root language known as Barbacoan, which shows they are related. Thanks to their languages, we can track the ancestral movement of these groups.

And that is how theories are born. The Awá are believed to have been jungle dwellers long before other groups, while the Chachis made it to the jungles of Esmeraldas later, as the Incas were conquering Quito.

We know that groups like the Tsachilas were semi-nomadic (linked to the Angamarcas and the Niguas, who have disappeared) and controlled the cloud forests of the western Andes, while the Karanki, which are also believed to have had their own Barbacoan language—now extinct (similar to the Tsáfiki of the Tsachila and the Cha’paalache of the Chachi people)— were sedentary.

The Karanki, in any case, died by the thousands during the Battle of Yaguarcocha, and lost much of their culture and population under the iron sword of Inca domination. Those who identify themselves with this ethnicity today speak only Kichwa.

The Awapit — like the Épera’s Sia Pedee — are languages from the same northwestern forests of Esmeraldas and South Western Colombia; yet, Sia Pedee is not Barbacoan, it belongs to the family of “Chocó” languages. They have been preserved for centuries and are still among us. The other Barbacoan dialects were actually spoken in and around Quito and northern Ecuador one thousand years ago, before Inca domination.

We don’t have to dig too deep: our past lives among us. It’s like finding a town in Italy that still uses Latin to communicate.

The Chachis did not follow the Karanki example of standing their ground to fight. Instead, they escaped, hiding their linguistic treasures in the impenetrable rivers — impassible for centuries — where they currently live in northern Esmeraldas. If they had not done this, today we would have no evidence of the language that gave name to many of our geographical landmarks, nor would we understand the cultural dynamics of pre-Inca society within our territory.

Many languages did not have the good fortune of either the Tsafiki or the Cha’paalache. The Amazonian Sapara, for example, is on the verge of extinction. It reached our modern age thanks to the very last Sapara elders who could speak it, but they did not manage to bequeath it to their children and grandchildren. Now, a handful of young Saparas are trying to relearn it. The A’i Cofán, Siekopai, and Siona may follow a similar fate, as their own languages cling to a handful of people to survive. Each member of these ethnicities is truly fortunate to be able to keep the secrets of their history in their own words.

Community projects, rural markets, and important native festivities allow us to witness, with our very eyes, at least a small piece of what was once the great spectrum of color and fashion of native dress in our country. There is still so much to admire.

However, much has changed over these hundreds of years. The arrival of missionaries, with their clamor for modesty, led women in the Tropics to cover their naked torsos. This represented a major modification. Tsachila women, to cover their chest, chose bright sequin blouses, a modern addition to an already colorful outfit. 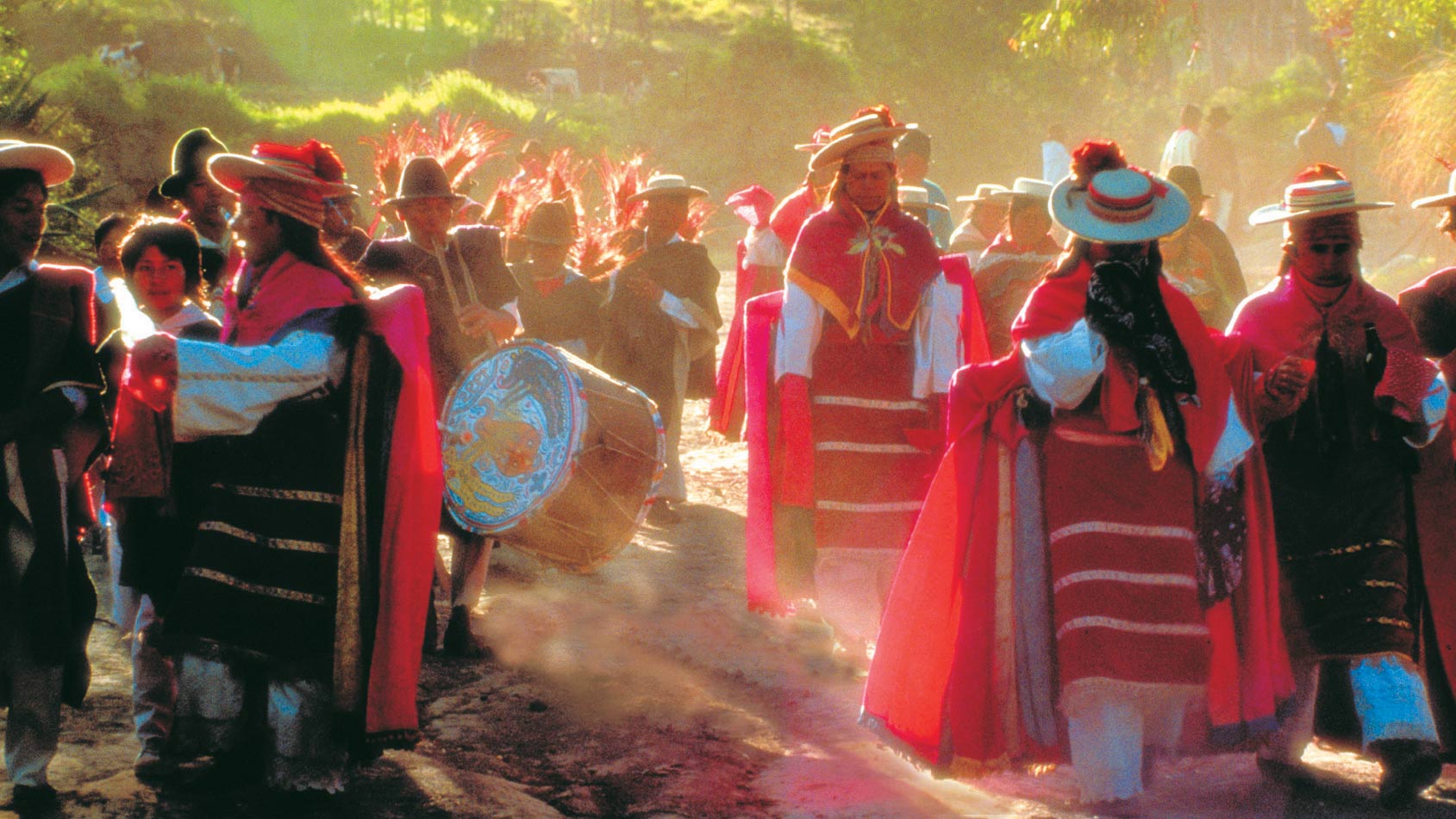 In rural areas dominated by haciendas, women dressed warmly for the cold weather, and in addition to their colorful ponchos, shawls and skirts, the haciendas in Colonial times made it mandatory to use blouses with set designs that identified the women as belonging to specific haciendas.

The practice was imposed by the Spanish nobility, by the likes of Vicerroy Francisco de Toledo (whose policies were particularly aggressive against the native population) and the Marquise of Cinchón (who famously received the first cures for malaria from quinine, extracted from Ecuador’s “cinchona” tree). These blouses have become a central aspect of today’s women’s garb, especially visible in the beautiful embroideries and silkywhite shirts that one sees on so many local women.

The use of feline skins, parrot feathers and toucan beaks in Amazonian ware may also slowly transform, with today’s environmental movements, replaced by nose bones and earlobe stretching, as our ancestral groups continue digging into their past… Change can easily become tradition, and vice versa.