Today we travel to the France of the early 1900s, when René Elie, founding owner of the Cyrano bakery in Quito, was born. We stop over in 1960s Quito where the brand was established and land in 2022 to remind you that Cyrano is still the most beloved bakery/patisserie of the Ecuadorian capital.

Cyrano is deeply inspired in France, conceived by the mind and experience of French patissier/baker René Elie; but it also tells a different story: the journey of a “migrant bread” and the recipes that have become a part of the city to which Elie migrated.

Born in the Dordogne (France), Elie arrived in Ecuador in 1948, looking to escape to a brighter future after World War II in Europe. From a young age he worked with his father, at his family’s mill and, after being imprisoned in the Spanish Civil War (and following a brief stint in Morocco to manage a hotel bar), he found himself unexpectedly becoming a “farmer” in an Ecuadorian hacienda. Of all the adventures, the latter would be the one to alter the course of his life.

In Quito, Elie returned to his roots: making bread. He sold croissants to delighted customers at the “Güitig” mineral water company pool and gardens; and after several attempts to build a bakery business with (and without) partners, in 1958, he finally opened his signature bakery Cyrano.

From delicious renditions of the traditional Ecuadorian “guagua de pan” bread dolls to French classics such as the baguette, croissant, pan-au-chocolat, an array of bread using different flours, and the addictive brioche, with its unforgettably soft and wispy dough, Cyrano dug deep into the heart of bread-loving Quiteños.

The Cyrano “touch” —born from Elie’s life experiences both in France and Ecuador— has grown alongside Quito’s palate, using local ingredients (such as corn or quinoa flour, Andean blueberries, etc.) to achieve a signature flavor, both homegrown and authentic.

But it is, perhaps, the “unleavened bread” that says it all: a hundred-year-old sourdough recipe —prepared for over six decades at Cyrano— that has always been at the forefront of this iconic bakery. Like all things good, it never gets old.

Cyrano created its “traveling box” for customers who cannot live without their beloved Cyrano bread, honoring the almost sacred habit of making Cyrano their very last stop in Quito for visitors before heading out to the airport. This special box fits perfectly in the plane’s overhead compartment. You see, there are no Cyranos outside Quito. Many visitors, especially those who know the reputation of Quito’s “high altitude bread”, are quick to bring home some French-style delicacies mixed in with the freshness and identity of local ingredients. 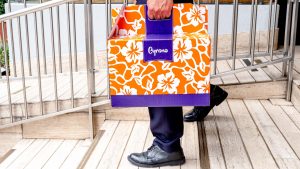