Don’t get caught by the coquettish “Quinceañera” (the Sweet Fifteen), nor fall into the arms of the “Viuda Alegre” (the Joyful Widow), and do watch out for the “Majadera” (the Pig Headed)… The heights of the mythical El Cojitambo rock are full of nicknames, dubbed by climbers who’ve scaled its heights over the last decade.

Who decided on a route’s or a feature’s name? How did the name stick? Did anyone write it down? It’s all part of the rich lore that has grown up around climbing in the Cuenca region. As a foreigner, climbing El Cojitambo will give you a crash course in Ecuadorian slang, at the very least.

This andesite rock formation rises 170 metres in northern Azuay Province. It dominates the countryside to the north of Cuenca and the minds of all the city’s climbers.

Such is its singularity and its popularity, it boasts no less than 130 different climbing routes developed to date. The first ropes and carabiners were hooked into the rock faces of this giant some 60 years ago. And the rock continues to seduce every climber, from expert to novice, from children to grandparents, who all find on it a place to feel free and to conquer their fears. 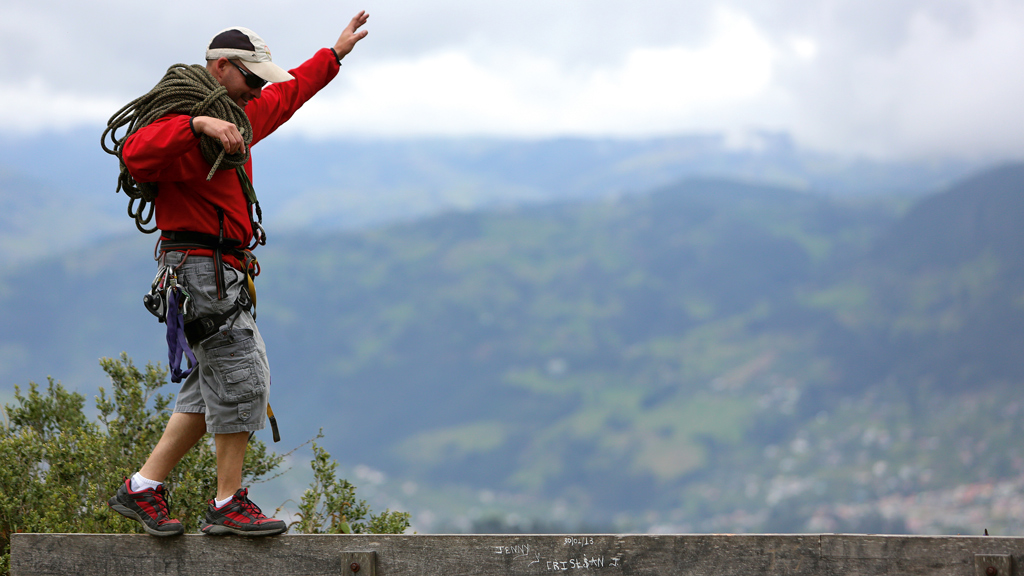 It’s no surprise to find vestiges of Cañari constructions here. Just like present-day visitors and inhabitants, they must have fallen under the spell of the rock’s grandeur and its strategic position lording over 360-degree views of the whole southern region of the country.

Cojitambo is regarded as the place to climb in the Cuenca area. Its vertical walls are a paradise for rock climbers who congregate at its feet at weekends and during the holiday season. Feted and promoted, it’s without doubt one of the best and most exciting places to enjoy rock climbing in all of Ecuador, as well as a place that fascinates photographers keen to capture these magical landscapes and their ever-challenging play of light and shadow.