What are you waiting for to join Quito’s ciclopaseo? Few cities are as commited as Quito to making the city streets biking lanes every Sunday. This excellent initiative has been going on for years!

The Ciclopaseo — a new compound noun in Ecuadorian Spanish roughly meaning “bike stroll” — is becoming one with the city. At the beginning, the project took place just once a month. Many doubted it would be successful (and many complained that the streets were being closed off). But it’s been several years now that this activity takes place every Sunday in Quito (and any change in route will undoubtedly be mentioned on the Saturday evening news). The main north-south arteries are blocked off from vehicular traffic from 8 am to 2 pm so that bikers of all creeds and abilities can make Quito their own, a biking “stroll” that runs the length of the city.

For some, it’s part of their religion. Like Sunday Mass: sacred sport. And the sacred discover-your-hometown under a new premise. It’s the moment to take your kid to learn to ride a bike (one of the four duties of every parent, of course), by allowing the city itself to teach him or her. For older kids, it is the beginning of a healthy addiction. Parents take advantage of the family time outdoors… or it can be an excuse to challenge oneself, perhaps attend to that body of yours that is losing its elasticity… The truth is, “Ciclopaseo” means something different to every participant.

It all begins, of course, from your point of departure. And with it, an unavoidable conundrum: to bike north or to bike south. For those who live at either extreme of the city, the choice has been already made, but for everyone else, it all depends on how difficult you want your ride to be, how far you want to go, the place and stopovers you’d like to reach… (among other criteria, of course). 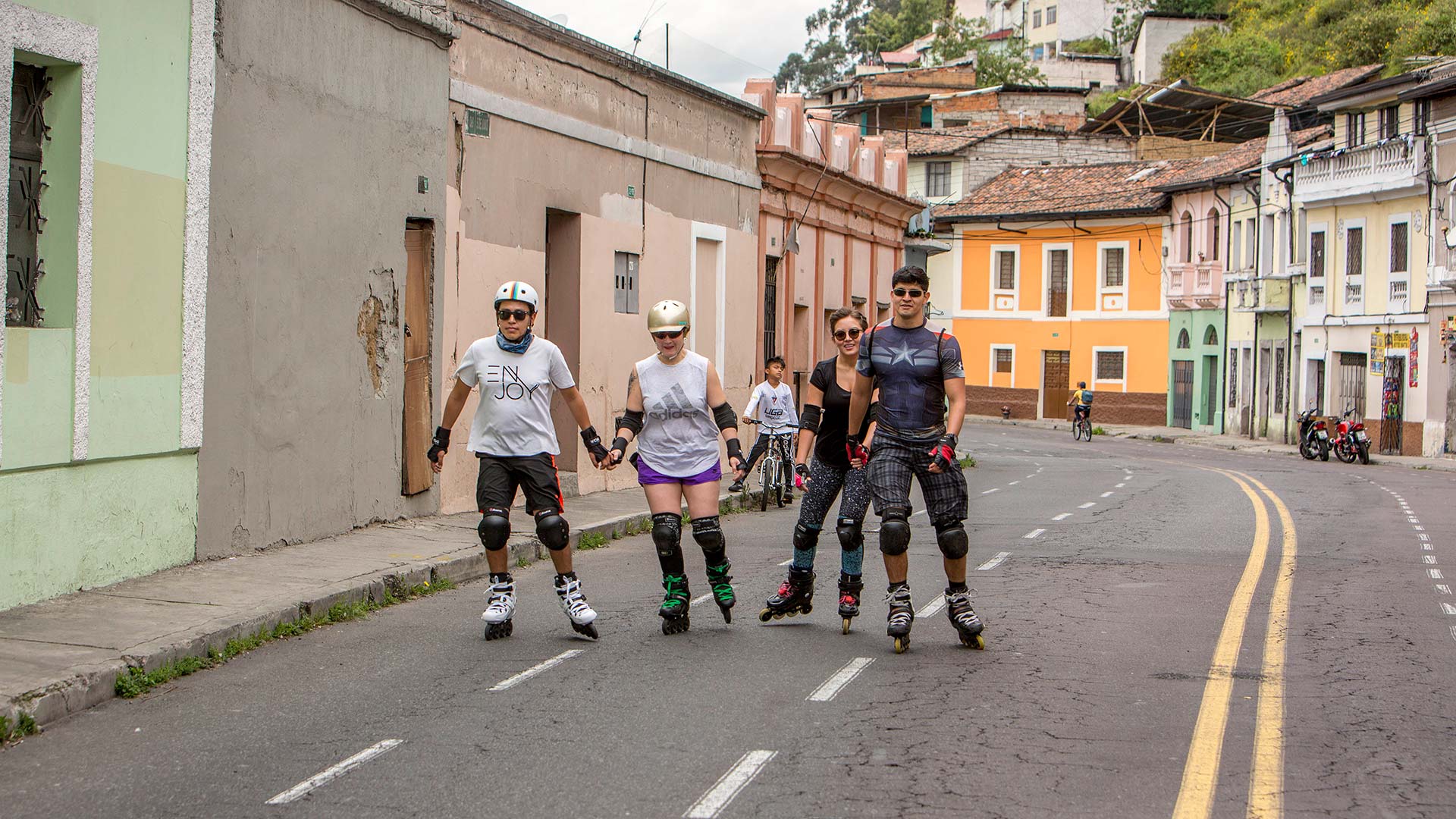 In general, the segment between El Ejido Park and the Bicentenario Park (the northern segment) is practically all flat. That means it is an excellent route for anyone who really doesn’t want to push themselves too much, or who doesn’t own a bike with gears and prefers not to deal with inclines of any kind (there are minor ones). It is, of course, truly ideal for young riders. It is quite common to see parents kneeling by the road-side, removing training wheels with their screwdrivers.

This segment also makes its way between three parks: El Ejido, known for its Sunday street art galleries and craft markets, games for children and street performances; La Carolina, a much larger park hugely popular with Quiteños, with sporting facilities, an artificial lagoon and several points of interest: the “Vivarium” reptile house, the beautiful Quito Botanical Garden and Mundo Juvenil (a kind of children’s museum/events center with a dinosaur theme park), as well as a BMX circuit. Finally, along the northern limits, you’ll find the Bicentennial Park, the former Quito airport that offers the nostalgic, perhaps dramatic, activity of riding against furious winds along the airstrip that suddenly became accessible to the public when the airport departed in 2013. Events are common at these parks — from weekend concerts and fairs to live theater and music — and can sometimes be reason enough to organize your visit.

Further north of the Bicentennial Park, the route takes us to the new “Kennedy” neighborhood, along the Galo Plaza Lasso Avenue, ending at Calle Arupos, where the northernmost information point of the route is located, three blocks north of the “Recuerdos” park/cemetery.

Stay hydrated by bringing water bottles or camel backs and making use of the EMMAPS stations for free water.

Use plenty of sunblock.

In the parks, the routes aren’t particularly obvious at times, so be wary of stray pedestrians.

Stick to the right.

The Ciclopaseo isn’t a race!

It is good to keep in mind that Ciclopaseo ends at 2 pm and it is wise to make time for your return since the experience is much less pleasant with cars.

Heading to the Historic Center

On the south side of El Ejido park, you’ll find an important resource for Sunday bike riders: store after store of bicycle supply stores. You can buy a new bike (a used bike), ask for assistance or buy biking accessories; you can even add gears to your gearless bikes. From this point on begins a slightly more irregular way towards the Historic Center. 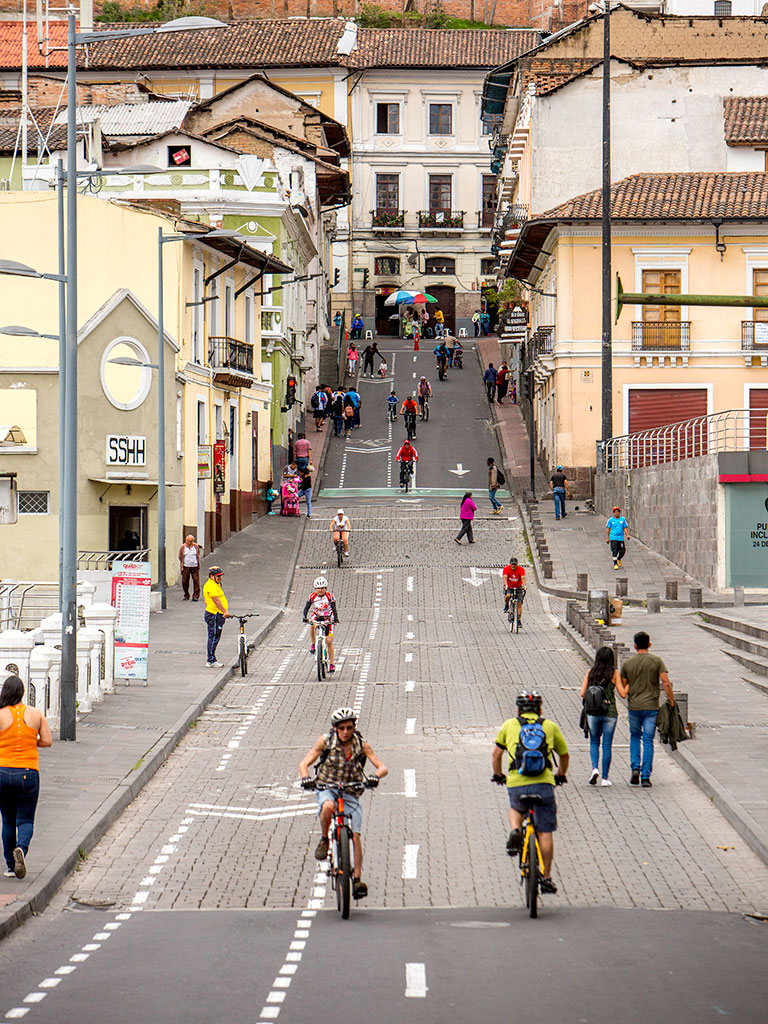 For many, this is one of the most appealing reasons for biking the Ciclopaseo. You climb Calle Felipe Borja to the Churo and Alameda Park; cross the great avenue Diez de Agosto to freewheel down to Plaza del Teatro (Teatro Sucre) on Guayaquil street; on your descent, pedal hard to climb Calle Olmedo, pass in front of the beautiful carved doors of the Monastery of Carmen Bajo and then turn left on Venezuela to reach Plaza Grande. Here, from the cornerstone of Quito’s Old Town, you can get off your bike and explore by foot. You can then visit the very beautiful churches, museums and cultural centers or walk through the neighborhoods.

You can make the Sunday biking experience of reaching the Historic Center a healthy habit of getting to know something new here every week.

The trip to the south from the Historical Center, for those who do not know the South, is, in reality, a journey of discovery. Quito, in the last twenty years, has created an entire new southern city and this is the opportunity to get to know it.

The first section takes us away from the Sunday bustle of the Old Town, on a loop around the eastern base of the Panecillo Hill. The interesting Calle 5 de Junio offers a special perspective, where towards the end you notice the huge mills of the old Pilsener Brewery. We are arriving at La Magdalena, where the Quito Metro (subway) will soon have a station. After several zigzag turns (duly indicated), you reach the large Avenida Hugo Ortiz, a main artery to travel south. The Panecillo Virgin now has her back to you (and you to her) and Pichincha begins to change its appearance as you approach a new volcano: Atacazo.

The complete Ciclopaseo route was created to be as comfortable as possible. There are hills (this is Quito, after all…), but any semi-athletic person with a decent bike can reach the end of the Parque de Las Cuadras in the south without major ado.

Hugo Ortiz takes you to Avenida Cardinal de la Torre, where you will find a row of sporting facilities (some are actually handsome synthetic grass football fields in excellent condition), very much appreciated by the locals, and a very active part of town on weekends. This street also takes us to the Rio Grande Linear Park, a recently recovered green space that extends into the neighborhood of Solanda. Unlike what most would imagine Solanda to be like, the area is quite picturesque, with small streets, passages and neighborhood squares. On the main street, Calle Marquesa de Solanda, we continue until Rumichaca Ñan, where you turn right and head towards football team Aucas’s Stadium, officially known as the “Gonzalo Pozo Ripalda”. Here, Aucas, one of the most popular teams in Quito, plays; the arena has also served as a stage for many a thrash metal band (even Megadeth played here). Maybe you can catch a Sunday game and become a fan of the “Papá” team, the Father of Ecuadorian soccer.

The last section of the Ciclopaseo continues onto Las Cuadras Park, with its tall, centenarian trees — it has an interesting nursery of native species project— a beautiful artificial lake and lots of green space to stroll about. It meets (one block east) with the Quitumbe Bus Terminal (which will be the end-station of the Metro). 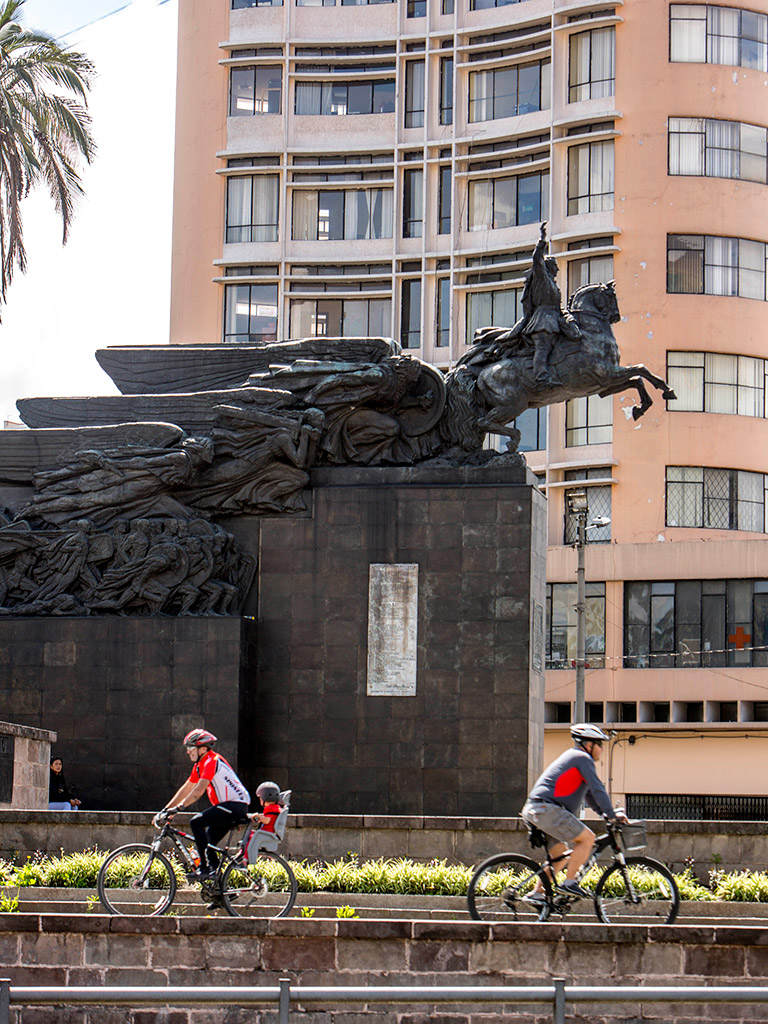 Quito’s Ciclopaseo is almost heart-warming… and truly quaint introduction to the world of Quito’s neighborhoods. Families, athletes, people training, children improving their pedaling techniques, fathers taking their dogs on their backs for a ride (you may even catch the always amazing entire-family-on-a-bike phenomenon with the baby scrunched up) these moments shared with strangers, especially when everyone is forced to wait for the green light to let cars through on certain cross-streets —Avenida Eloy Alfaro, Patria, Rodrigo Chavez, etc— is a moment to savor and share, a moment to bond with other Quiteños, with the city, with people who love to bike. While other cities in Latin America are beginning to organize themselves to create similar activities, Quito has already made this healthy appropriation of public space a reality. Quito’s Ciclopaseo is truly part of the city, and surely here to stay.

There are several information booths (where you can even rent bikes) are located in the following cross streets:

From North to South