Chimborazo: Mission to the summit

Three centuries ago, French travelers, geodesics-turned-mountaineers by necessity, took several years to measure a single stretch of the inter-Andean valley of current-day Ecuador. They sought to discover the true form of the planet. Crossing hills, cliffs, mountains and snow-capped peaks with Orion in view, they could not have been closer to the stars.

They did not know, as we do now, just to what extent that was true. And when we say now, we mean February 2016, the date when the so-called “third geodesic mission” took place, commemorating the feat of the wise Frenchmen of the XVIIIth century: measure the shape of Earth. What they managed to prove – that our globe is flattened at the poles – suggested that Ecuador’s highest volcano, Chimborazo, could be the farthest point from our planet’s core. That this same summit might also be higher than the giant Everest. Or, put another way, that the summit of Chimborazo is the closest point to the stars, the moon and the sun… Nobody had ever taken up the challenge of confirming that suspicion.

“Remembering always those who were here before and opened the path,” proffered Ivan Vallejo, as if invoking an initiatory prayer.

The renowned mountaineer, the first Ecuadorian and third Latin American to summit not only Everest, but the 14 mountains considered to be the highest in the world (without oxygen!), was in charge of leading the group that set out to measure Mount Chimborazo. They departed Thursday night, February 4th, with a clear sky overhead, the Southern Cross in sight. They remembered Humboldt; they remembered La Condamine, Bouguer and the members of the first geodesic mission; they remembered Whymper and the Carrel brothers, the first mortals to reach the mountain’s peak in 1881.

The group was made up of three French scientists – Jean Mathieu Nocquet and Fréderique Rolandone of the IRD (Research for Development Institute), and Mathieu Perrault of the National Polytechnic School’s Geophysics Institute –, four Ecuadorian guides, colleagues from the Instituto Geográfico Militar (the military’s Geographic Institute), and Ñan, the latter in the talented photographic eye of Angel “Chili” Martinez. The expeditioners set off carrying radio antennae, high precision GPS, batteries and solar panels (gear that weighed much less than that of 280 years ago), the necessary mountaineering equipment, and cameras to document the event. 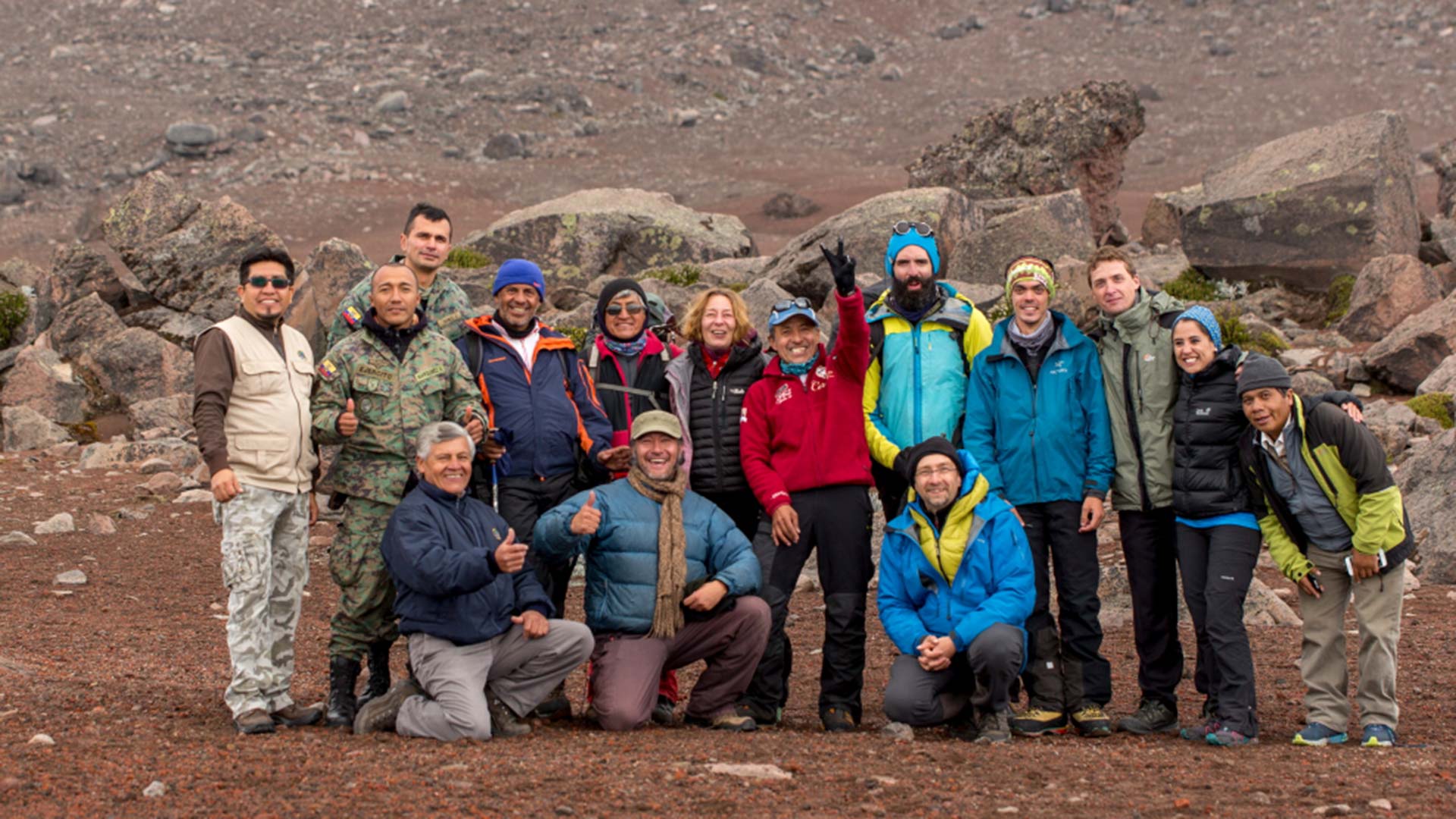 Once at the Ignacio Veintimilla peak, which they reached at six in the morning, they started their ascent to the highest point: Whymper Summit. It was uncertain whether the objective would be achieved, since reaching Whymper involved crossing glaciers full of holes and icy peaks jutting up three meters high. Our country’s most coveted pinnacle, and possibly the highest point on our planet, was finally topped two hours later.

Luckily, a beautiful day awaited the expedition, which allowed the team to stay four hours collecting measurement data. Batteries die fast in low temperatures, and were substituted by solar panels, which were thankfully replenished by the sun (storms also stayed away). Around fifteen US and Russian satellites (GPS and GLONASS) were contacted to obtain the necessary information, and through that the scientists could interpret and compute the measurement at the lab.

A series of celestial triangles of information between Earth and the satellites offers, at least superficially, a valid comparison with the classic trigonometry used by the geodesic mission back in the XVIIIth century. But with high precision GPS, automobiles to carry us, mountaineering equipment, photographic and film gear, computers to calculate the data, and the greater astronomical and geological knowledge that we have today, something that 280 years ago was unthinkable turned out to be completed in a matter of days.

Carrying equipment in the strong wind that bashed the summit and the cold that froze the tips of our colleagues’ fingers was certainly uncomfortable and difficult, but every member of the group was excited to reach the astounding heights of Chimborazo’s peak. The expedition concluded at 4 pm, once everyone had returned to the refuge. 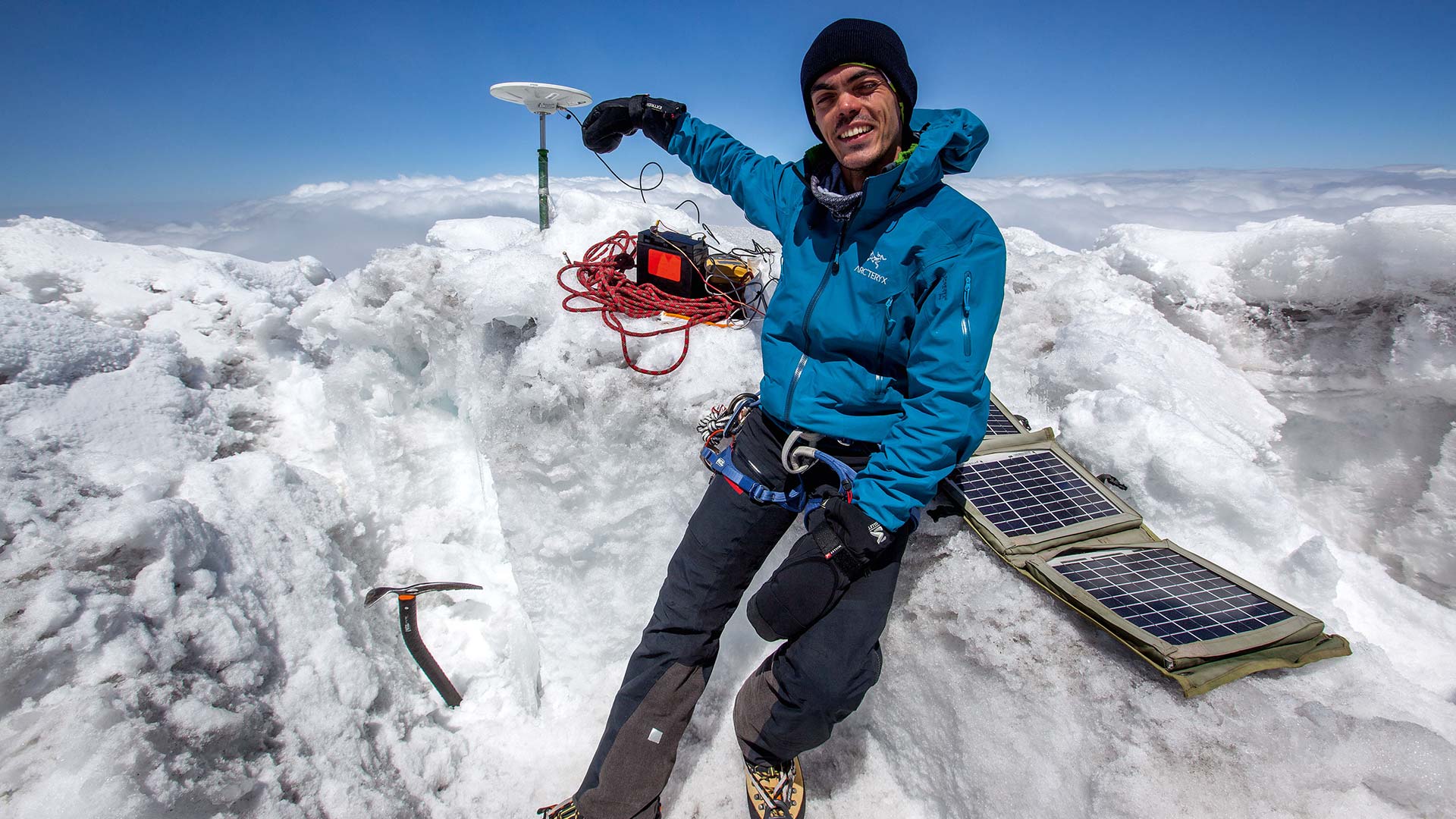 Who would think that scaling mountains would be part of the deal for today’s scientists. One might even imagine scientists as a strange race of humans dressed in aprons, stuck in laboratories full of microscopes, in investigation rooms covered in screens, poring over charts and digital graphics and reading with a magnifying glass the resulting indecipherable print. Of course, that is part of scientific labor. But science has never stopped being, essentially, an ode to human curiosity. Our modern scientists, to teach humanity about the height of Chimborazo, had to prepare themselves climbing mountains like Cayambe, Ilinizas and Tanzania’s own Kilimanjaro. Our scientists have seen the mouths of volcanos and the sources of oceans, the most remote parts of the forest, the furthest corners of the Arctic, and now, the highest point of the Earth, too. Scientists are those who have been there. The results, we are now proud to be able to share with the world, reveal that Chimborazo is indeed the furthest point of our planet, the one closest to the space surrounding us.

Beyond seeming like a daring exercise in statistics, this measurement allows us to know more about the movements of tectonic plates of the equinoctial zone, revealing data on earthquakes and volcanoes that with each violent shake reminds us that it is alive. The first geodesic mission was witness to an eruption of Cotopaxi and to the great Lima earthquake, and helped to establish the idea of the planet as a living entity: today we should always try to better understand its life processes. These, in turn, influence the life of those that inhabit it. On the summit of Chimborazo, with the wind, the cold, the world at its feet and so close to the stars, this expedition led us to think not only that the achievement of scaling a mountain so great is the result of science, but that it is also a window towards the future that this very same science permits us to build.