We love Cuenca, it’s as simple as that. So much so that two of our issues focus on countless aspects of Cuenca’s culture, attractions, artists, museums, idiosyncrasies, crafts, etc… (as well as the excellent travel routes taking you north and south from the city center). We always return ready to discover more. This time, we visited during the November 3rd long weekend to celebrate Cuenca’s Independence from Spain!

We share with you one of our favorite walks: a fascinating “church tour”, adding new sites and activities to check out since our previous visit. We set out from Cuenca’s wonderful Historic Center at Parque Calderón into the heart of the city’s architecture and monumental grace.

We stand at the city’s nucleus, at the central park square, surrounded by monumental trees, including eight Araucarias brought directly from Chile, which surround the central statue in honor of Abdón Calderón, the national hero who died at the hands of Spanish royalists at just sixteen during the Battle of Pichincha.

The square sits in front of the sensational New Cathedral (officially, Catedral de la Inmaculada Concepción), an indisputable point of reference with its glowing sky-blue domes that dominate all other buildings throughout the Historic Center. Actually, none can, by law, exceed it in height. Legend has it that its spectacular Romanesque brick façade (and ornate marble arches) lead Pope John Paul II to wonder if he had been transported back to Rome. 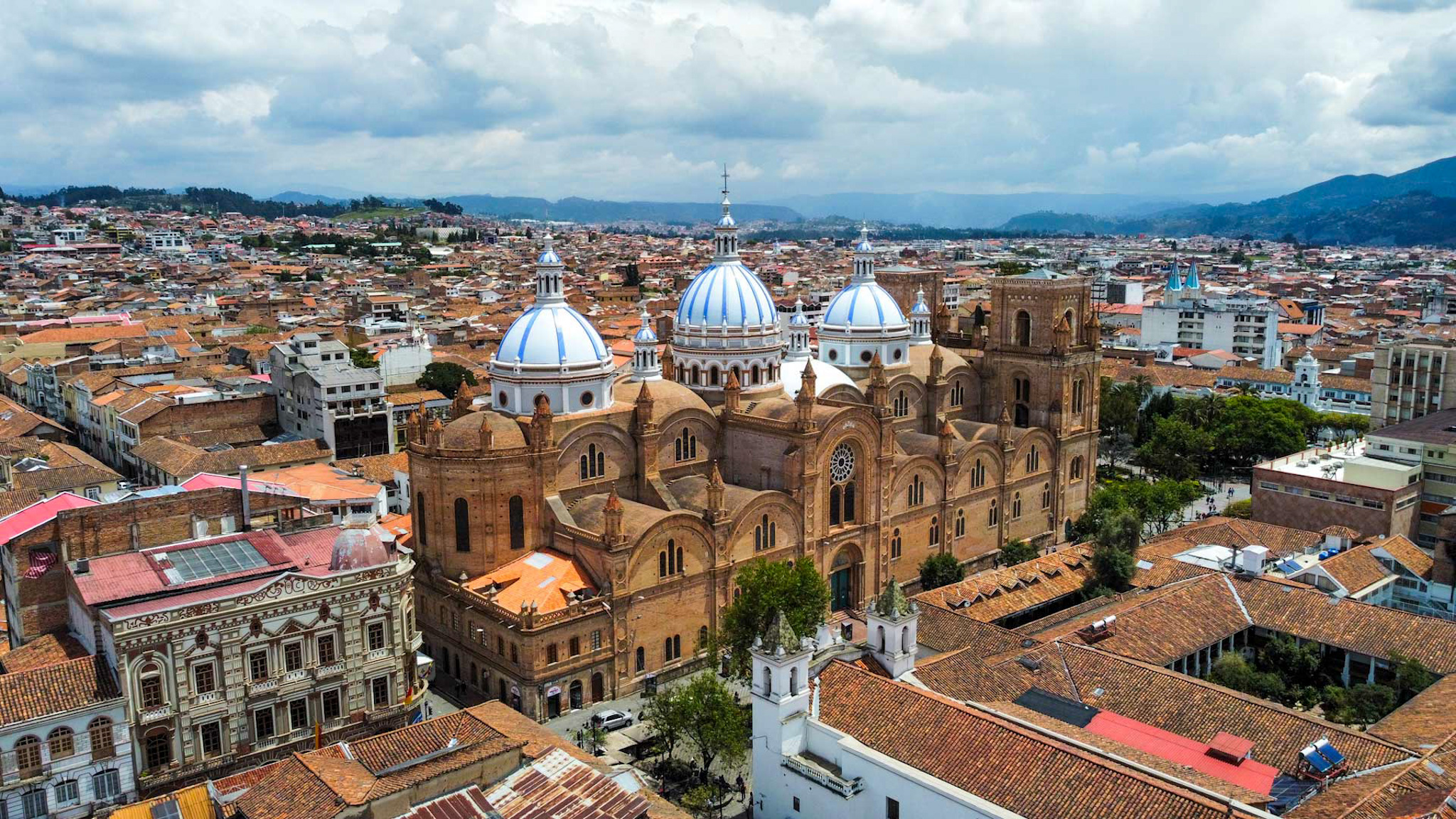 A brand-new tour organized by Fundación Municipal Turismo Para Cuenca (in other words: Cuenca’s official tourism office) lets you visit the famous domes! “I want a temple as big as my faith,” were apparently Bishop Miguel León’s words to German architect Brother Johannes Stiehle, in charge of its construction; which he began in 1881. However, the project was never completed.

It was conceived AS the largest church in South America, a magnificent neo-Gothic structure whose end result would be thwarted by a miscalculation.

If it had been completed as planned, it would have either toppled or cracked in two. The cathedral, however, has the capacity to hold 10,000 people, which reaches capacity during events such as Palm Sunday. Note the intense hues of the beautiful stained glass windows, the white Carrara marble on the floor and the high altar, made almost on purpose so as not to fit in, revealing a Neo-Baroque style.

On route to El Sagrario

Behind the New Cathedral, to the west, find the busy Plaza de las Flores, a picturesque square that seems to grow organically from the Carmen de la Asunción cloisters. The church is sometimes closed, but the icon of Our Lord of Justice usually receives the faithful who come from all corners of the city to visit a chiseled rock on which the image of Jesus is painted.

Here, don’t miss out on the “agua de pítimás”, a tea-like beverage with pinkish color that is good for “heart and spirit”, from the side store, concocted by the Carmelite nuns to bring peace to the local’s day-to-day chores.

Our tour continues east, back to the Park. Right in front of the new cathedral to the east is the Iglesia del Sagrario (or Old Church), on Calles Sucre and Luis Cordero. Here, we were received by a theatrical troup that dramatized the legends of Cuenca, touring the entire museum while experiencing the dark stories that have frightened Cuencanos for decades.

Each room displays objects, costumes, and figurines from different eras, collected by the church to create the permanent exhibit. Undoubtedly, the most striking are the life-size carved figures of Jesus and the Apostles, found in a room adjacent to the chapel. Its beauty and detail make it a true highlight. 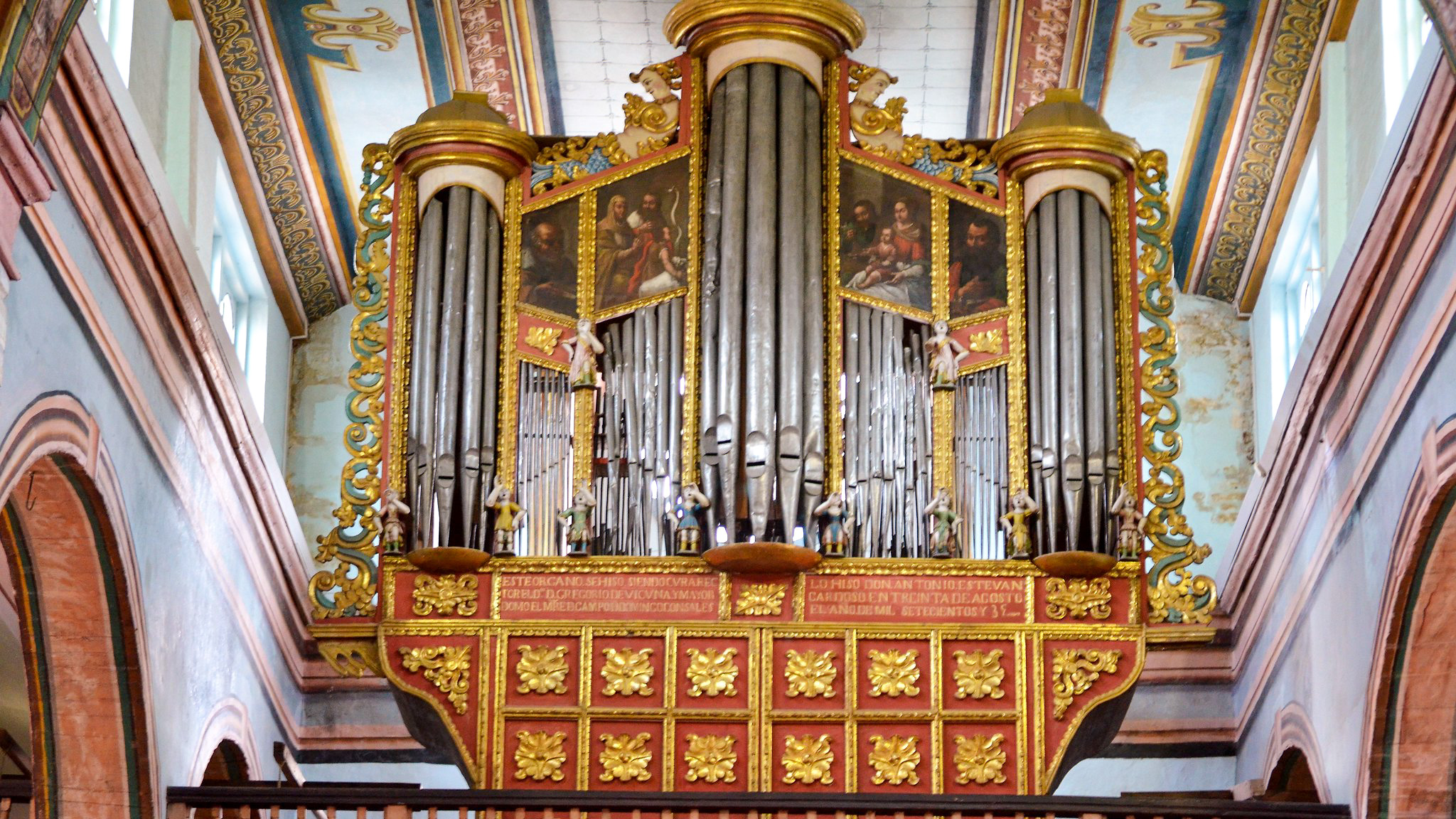 Undoubtedly, another very special space are the catacombs. During our “mysteries and legends tour of Cuenca” we had the opportunity to see a different facet of this wonderful heritage building and get to know a part of Cuenca few have experienced.

Another attraction that you certainly can’t pass by is the Iglesia Todos Santos (“All Saints Church”), located on the busy Calle Larga. A guided tour of the heritage temple was opened during Independence celebrations in early November. Since one is used to walking by and never peeking in, this becomes a most fascinating option.

Now one can tiptoe across its ageless walls, where guides and signage describe relics found on site, including ruins of Cañari and Inca cemeteries on which the church stands.

Handsomely restored and redecorated with tapestry of admirable workmanship, this temple transports us to the days when the church was built. The main altar and smaller side altars where saints stand are dapperly covered in gold leaf… in-depth insight of Cuenca´s past, both aesthetic and historic.

Like at the Cathedral, you can now climb to the church dome for a 360-view of the city along the Tomebamba River. It is worth mentioning that the name of the church is not a tribute to the saints that protect it, but to the neighborhood in which it is located.

For a full experience, we recommend you visit these churches the same day and discover how unique they are. Plan your visit with the following information at hand: