One of the most famous journeys in Science (and History): Charles Darwin on the HMS Beagle. Discover with Ñan the anecdotes that marked the scientist’s travels to the Galapagos Islands.

Darwin knew that he would travel around the world when he embarked the HMS Beagle, skippered by young Robert FitzRoy, since the project of circling Tierra del Fuego and turn back home was extended to cross the Indian Ocean and round the Cape of Good Hope to reach Europe. What Darwin could not have known was the much longer journey this voyage to become one of the most influential minds in History.

Witnessing an active volcano: that is what Charles Darwin hoped for when envisioning a stopover in the Galapagos. By that time, he was itching to get back home and glimpse “the last and glorious view of the shores of England,” as he explained in letters to his sister Caroline; and to John Henslow, his former teacher and friend, who supported his participation during the HMS Beagle’s survey voyage along the southern coast of South America. 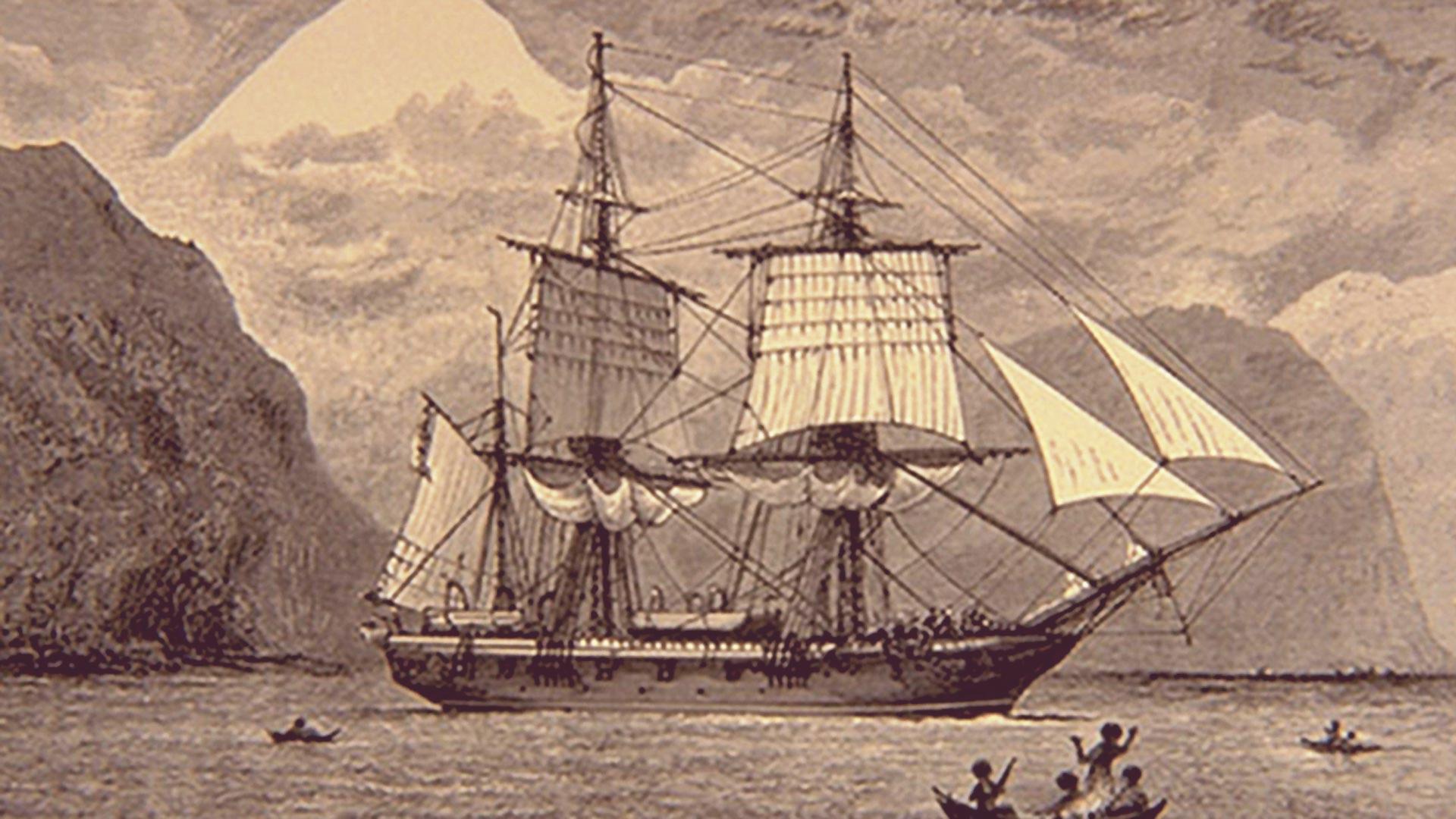 The trip, sponsored by the British government, was a small segment of what we might call the grander market analysis of the young South American nations that, only a handful of years after independence from Spain, were ready to do business with the world. England was hungry to be the first in line.

Many of these  nations already enjoyed a fledgling autonomy. The Republic of Ecuador had only been born months before the Beagle set sail. The medium-sized carrier stopped at different ports seeking to understand their coasts and river deltas. The mission measured shorelines and ocean depths, created nautical charts and analyzed the commercial potential of each site.

The chronicles of the Beagle’s voyage made Darwin a household name… but it was only a preamble for what was to come.

Adventures included nights of drinking and singing with Argentine gauchos, finding fossils of giant prehistoric mammals, leading expeditions into the fantastic worlds of Patagonia and the Andes…

But not everything was well. The crew was forced to defuse protests, rescue shipwrecks, and they even tried to convert “savages” to Anglicanism in places like Tierra del Fuego, intending to create a commune friendly to British interests (a mission that was destroyed by neighboring tribes and completely abandoned weeks after its creation).

These occurrences are referred to in great detail in the fascinating and, at the time, quite popular The Voyage of the Beagle by Charles Darwin. But history never really gave much importance to the mission’s central objectives and the many adventures and misadventures it wrought. It was, of course, Darwin’s scientific findings that were passed down for posterity.

Darwin’s spot on the vessel was ensured when FitzRoy became captain after his predecessor committed suicide on the poop deck (immediately relocating his cabin as far away as possible from the tragic event). In addition, he requested that, as part of the crew, a “gentleman,” preferably a geologist, more or less his age, be admitted, to collect all the technical and scientific information and, perhaps, to ensure the companionship of someone more like him, rather than a sailor, to face the ship’s ghosts. 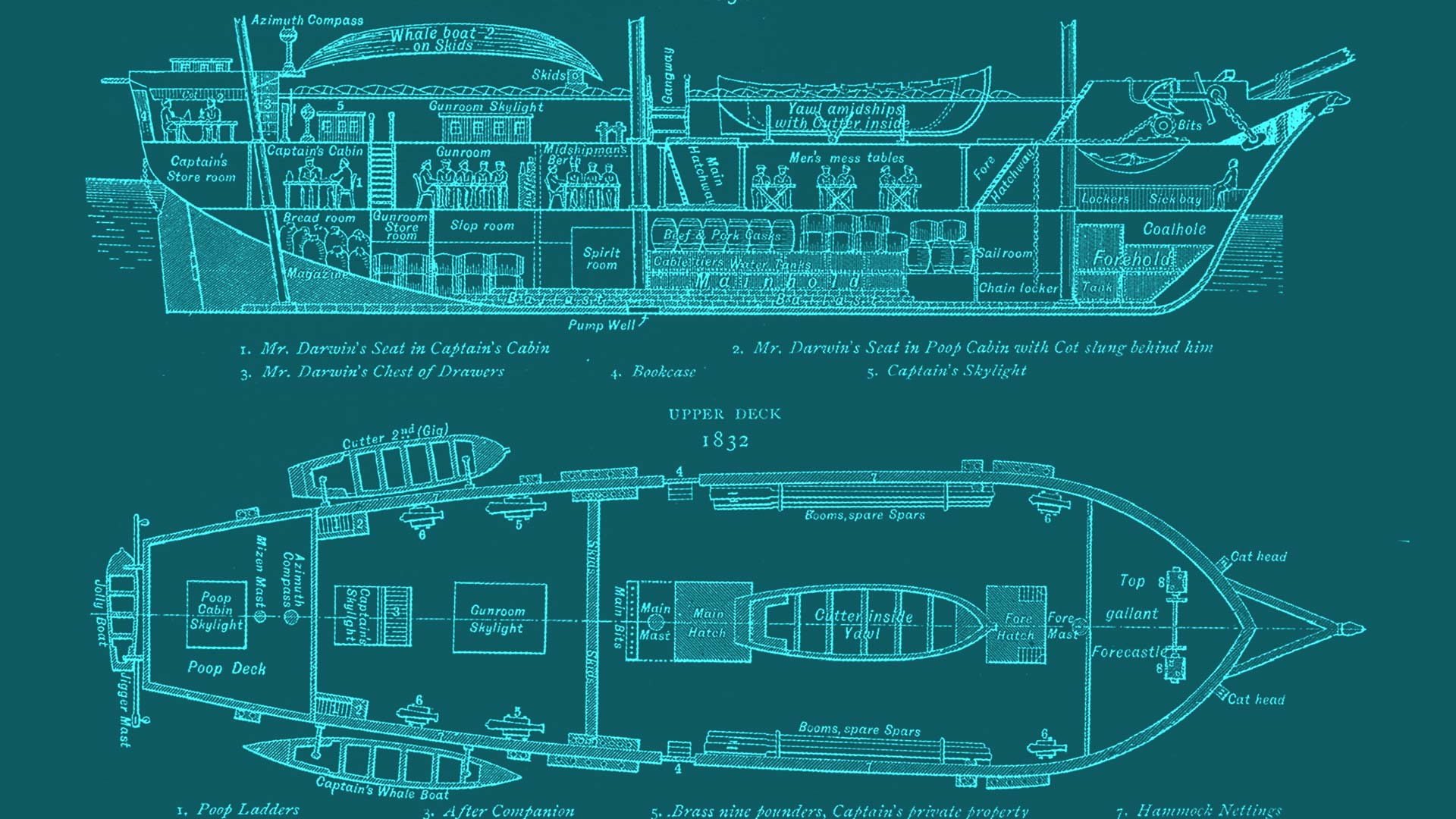 This “gentleman” was Charles Darwin. A young man who completed his tasks with admirable dedication. He even recruited and instructed one of the crew members, Syms Covington, to assist him in collecting and preparing the specimen skins. Even though he was seasick almost the entire time and his working quarters were tiny — a mere 12 square meters including the shelves, kitchen oven, washing block and an enormous 6-meter-square chart table — with great enthusiasm he roughed the trip, always curious to reach new destinations.

His pleasant and energetic nature made him a cherished companion, someone who could get along with all sorts of people. From illustrated men to the more rugged sailors, they all liked Darwin. And FitzRoy came to appreciate him deeply (although, when they met, he apparently did not like the shape of his nose). He graciously recalled the “cargos of apparent garbage” Darwin would bring back onboard.

Darwin wasn’t keen on the fact that FitzRoy defended slavery, but recognized the captain’s talent and intelligence. FitzRoy later invented a reliable method of climate prediction, becoming the first director of a meteorological institute in the world! He also took his own life at the age of 59.

Voyage to the Galapagos

Although the Beagle had predicted that its expedition would last only two years, the journey was nearing its fourth year when it first anchored on Chatham Island in the Galapagos (San Cristobal), with more than half the globe to go.

Two years more would pass before the Beagle finally returned to England. Even though young Darwin was always psyched to explore the next stopover, at this point he seemed tired, hoping to return. Describing inert craters that consisted of “nothing more than a ring of rocks” perhaps offers a glimpse into his initial disappointment with the islands. His burgeoning interest in geology, inspired by his mentor Adam Sedgwick during his years at the University of Cambridge, and very much present during the first half of the voyage, began to sound more like a mere obligation than something that truly got his heart pumping.

It was here in the Galapagos that his other passion, biology, took over.

From the moment Darwin set foot on the archipelago, animals and plants flooded his notebooks. All but one specimen of his Galapagos bird collection was new to Science and his plant collection was the most complete for many years to come.

His observations of fish, turtles and the “stupid” iguanas, which he would subject to a series of extreme experiments (such as tying them to a stone to see just how long they could breath underwater), include the first ecstatic encounter with the giant tortoise: “surrounded by black lava, the leafless shrubs and large cacti, they appeared most old-fashioned antediluvian animals, or rather inhabitants of some other planet.” 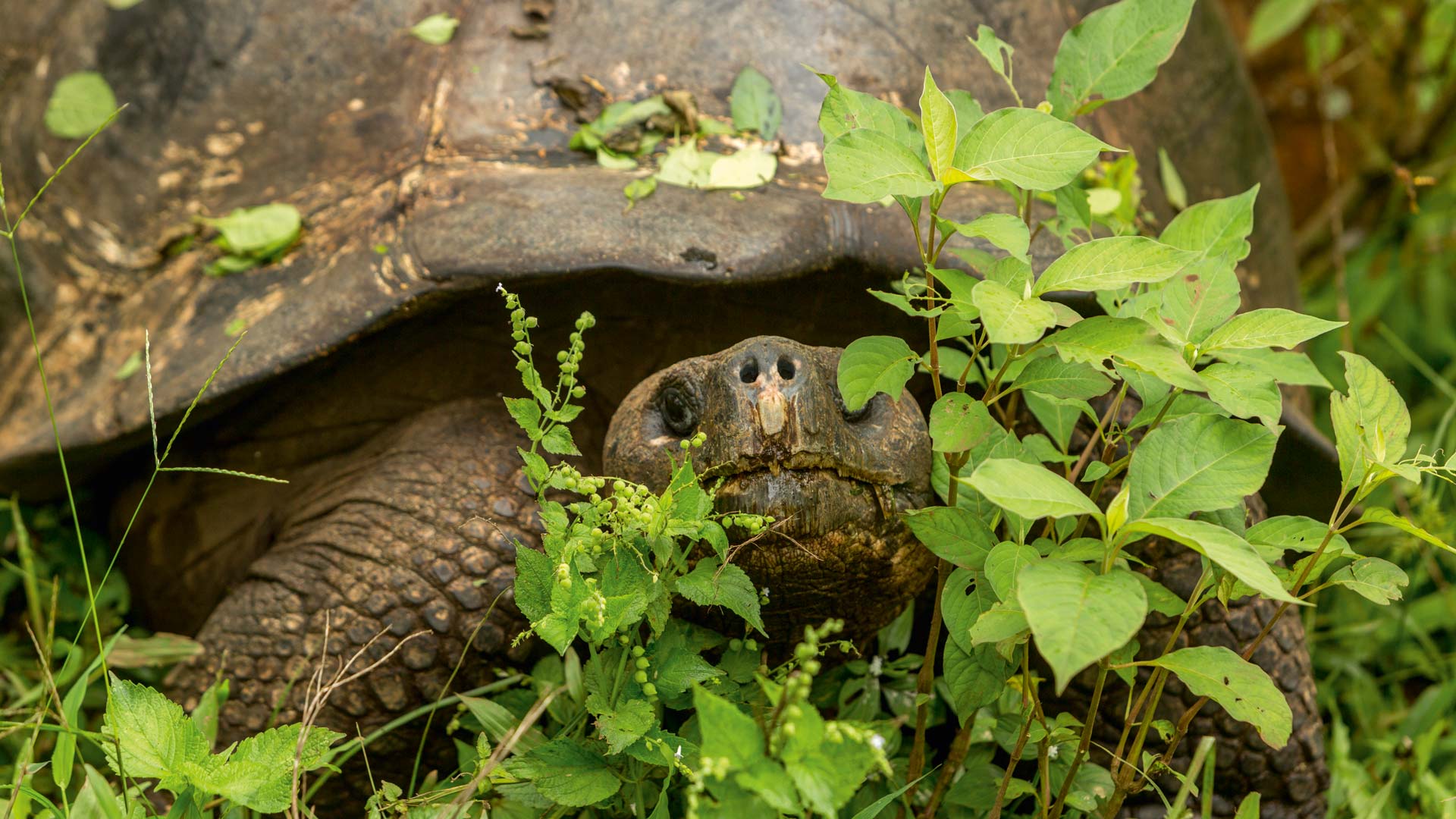 Ironically none of the specimens of these incredible creatures, so central for future generations of evolutionary theorists, made it to London’s museums. Most of the tortoises were eaten en route to England. They say Darwin even kept one as a pet, Harriet, which died in 2006 at about 170 years old.

From Floreana, Darwin skillfully collected “all the animals, plants, insects, and reptiles,” excited to learn which so-called “center of creation” they belonged to. But his vision was subject to the vision of the times; science was not about refuting theological principles, especially not the concept of God as creator of all living things. But as science sought to understand what God put in this world, perhaps only to recognize how His creations could benefits mankind, scientific observation began to blur its original intentions, focusing more and more on the why things were and how they came to be rather than merely how things worked.

When Darwin set sail on the Beagle, scientific discussion was becoming more and more heated, reflecting different visions and contradictory perspectives of God’s intentions, seeking to explain natural processes to elucidate his 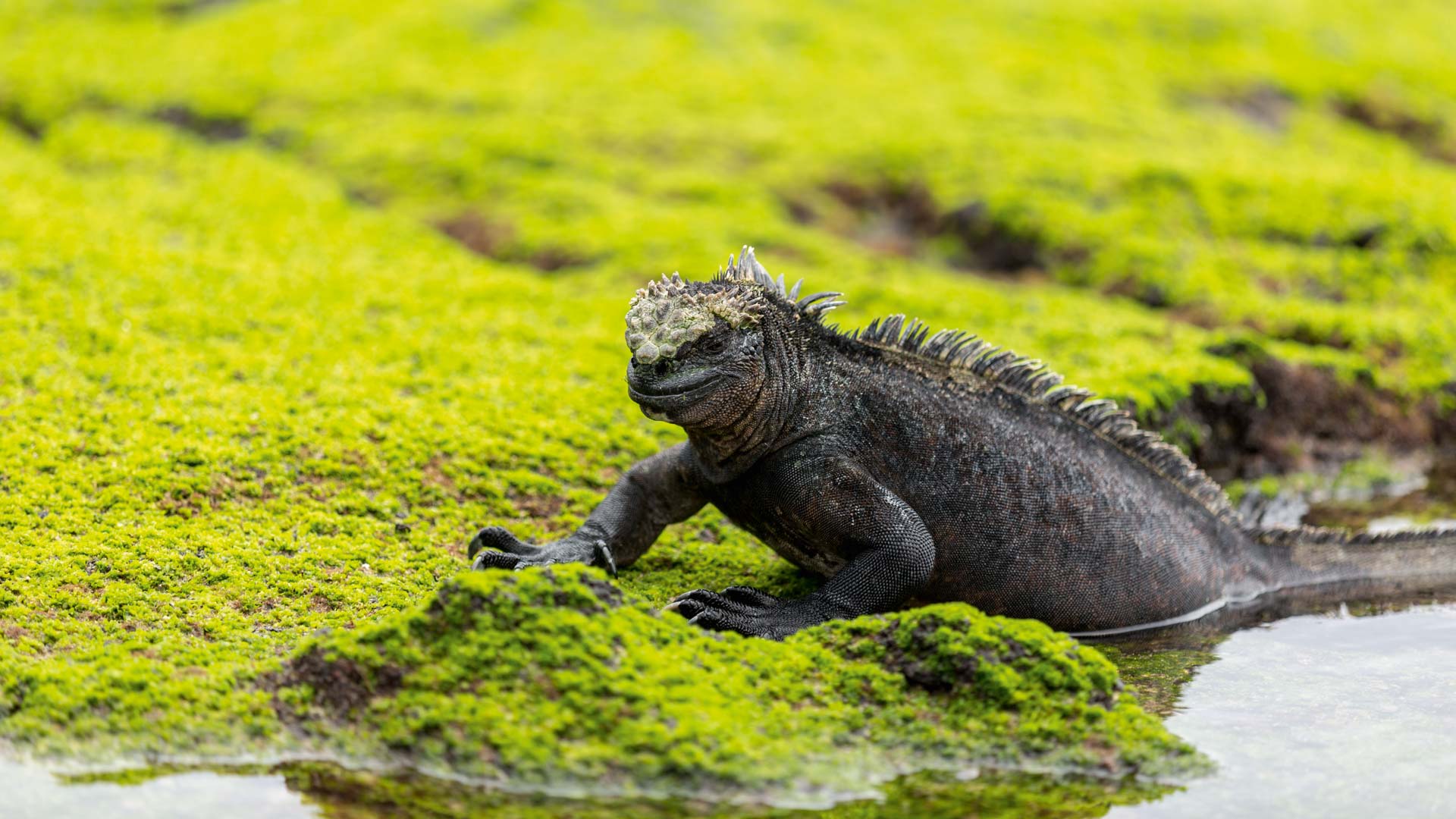 Other thinkers viewed modern science and its ambitions with alarm, a Pandora’s box that no one could have guessed would be opened by Darwin, an inexperienced collector and guest on a secondary mission that had no specific scientific aims, who also, ironically, had been considering joining the clergy upon his return to England.

One can certainly say Darwin was in the right place at the right time. He happened to be in the field in one of the most isolated places in the world. A place where species, their creation and those very processes were food for thought like nowhere else on the planet at the very time science itself began to bout with philosophical theology.

Ideas in terms of Creation, its processes and the appearance of animal species were taking on a new light. Darwin’s own ideas on evolution can actually be traced back to a journal entry dated July 1837 (a year after his return), in which he clearly states that the Galapagos had been the main source of all his views on “transmutation.”

We like to call the hellish island world with its terrible droughts and perpetual eruptions, onto which animals seem to have been dropped like veritable gladiators of survival for the fun of a God wishing to observe which of them made it out alive, “a laboratory of life on earth.” Was the Galapagos God’s ultimate experiment? For early 19th-century scientists, the question was absurd. Why ask why God does what he does?

Nonetheless, for everyone who ever ventured to the islands, from God-fearing bishops or infamous pirates, to Charles Darwin himself, the Galapagos proved to be a strange, haunting place that posed innumerable, unavoidable questions. Its rocks, its volcanoes, its plants, its animals… they simply did not fit in, or in Melville’s terms: Galapagos was not even fit for “the outcasts of the beasts.”

Had it not been for Darwin, natural history arguably could have ignored the evidence presented by the Galapagos and gone on in relative peace. But as soon as Darwin took his — absurdly limited — collection of mockingbirds, muyuyo bushes, cactus trees and marine iguanas to museum collections, where their bizarreness got logged into the vast annals of Western Science, there was no turning back: knowledge multiplied exponentially and human thought was forever altered.