These four fiestas are, according to us, among the most special and traditional of the country. Experience Carnival festivities in the Central Andes, discovering the cultural treasures, traditions and identity of each one of these fiestas. 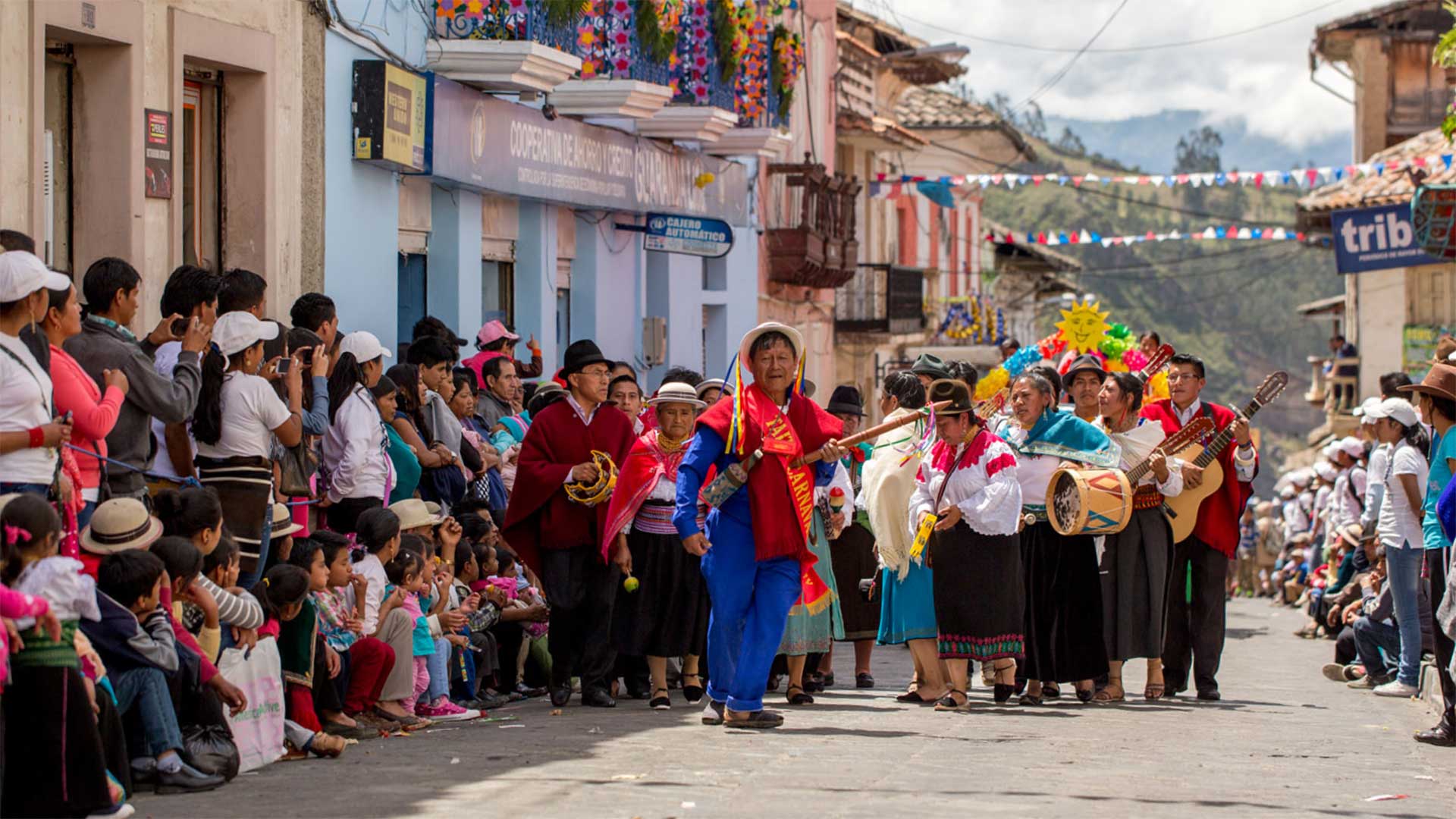 It can last up to six days and there are few cities that, during Carnival, bring together so many people in the streets to watch or participate in its processions. Here in Guaranda, masks abound, with vivid colors, dances and troupes and floats with large efigies, testament to the high level of care, organization, and anticipation with which the events are regarded. The Taita Carnaval, or Father Carnival, is the great host and the huasitúpacs are the trouble-makers who give out drinks of the town’s excellent produce: a high alcoholic grade aguardiente known as pájaro azul (“blue bird”) – don’t be surprised when you see people dressed up as one in the streets! The drink is distilled from boiled sugar cane, herbs and… cooked chicken.

People play hard at carnival, with eggs, corn flour, flour and above all, with a lot of foam.

The Taita Carnaval officially inaugurates the games a week before the party.

The strong, festive, diverse colours of each group of those taking part in the parades fill the streets.

The festivity was named one of Ecuador’s Intangible Cultural Heritages in 2002. 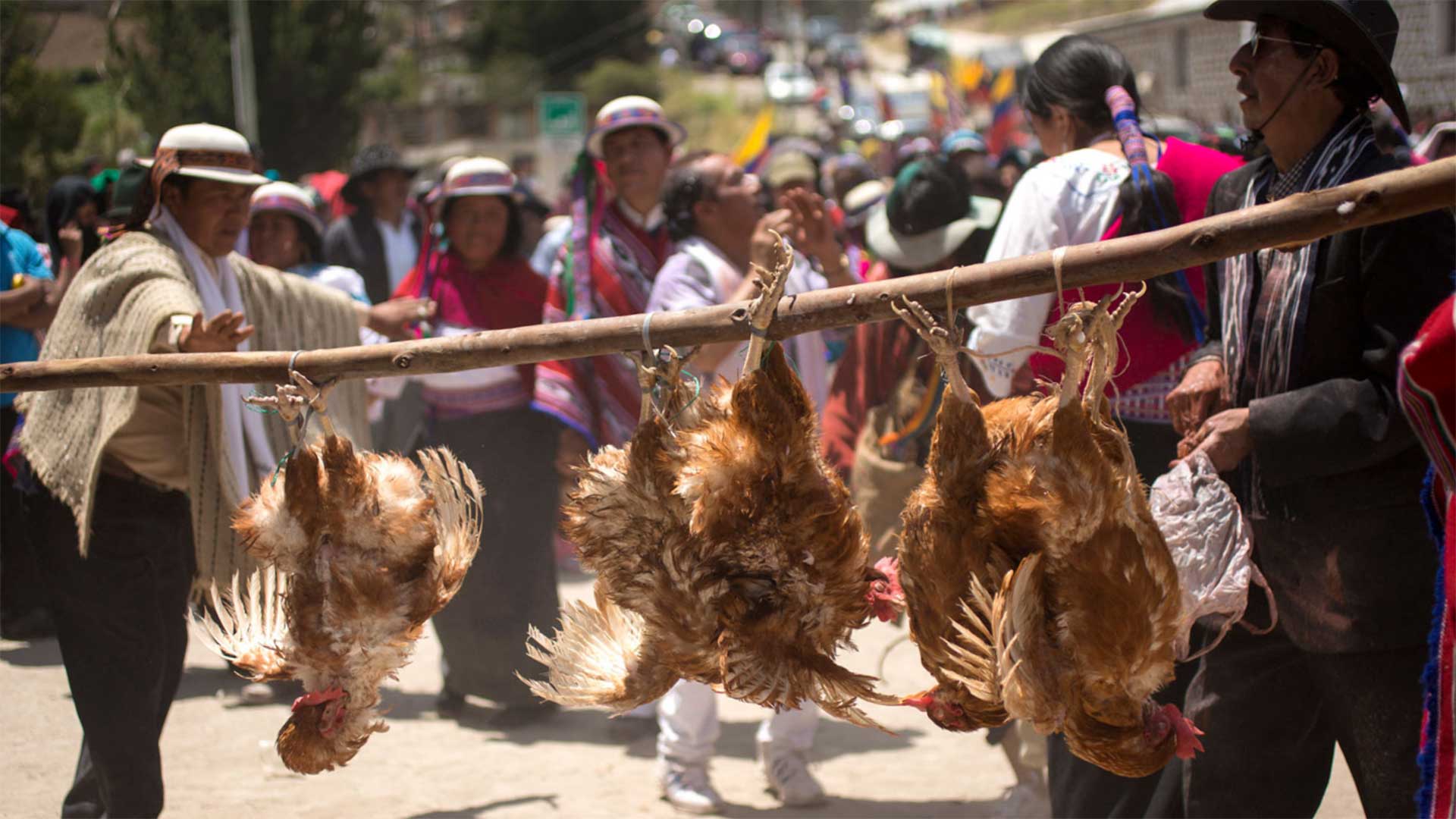 Cacha is one of the places that best expresses the indigenous dimension of the Carnival celebrations in Ecuador, and its link to the so-called Pawkar Raymi (the celebration of flowering) dedicated to the first sown fields of the year. The celebration is known also as Alajahuán, after the sacred hill that the locals visit during these dates after it became the setting of a legendary apparition of Christ. Despite the Catholic theme, folk-songs and ditties in Kichwa dominate; men wear beautiful red, patterned ponchos, or dress up as policemen or women with brightly coloured clothes, livening up the arrival and departure of the adjacent communities to the central square of the town, where they let rip with dancing and mayhem. The party continues over the following days in the surrounding neighborhoods.

The women come to Cacha’s main square with millstones or carry live cockerels tied to a stick, so that they can play at catching them, or the one-and-only “buried rooster” game.

During the days of celebration, groups of men go from house to house, singing and asking for offerings of food from the owners; and the young men ask for their daughters. There is also the “procession in search of single women”.

Three symbolic “beings” are celebrated by the offering of germination: Pachacama (God), Pachamama (Mother Earth) and Ayllu (the spirit of reunited people.) 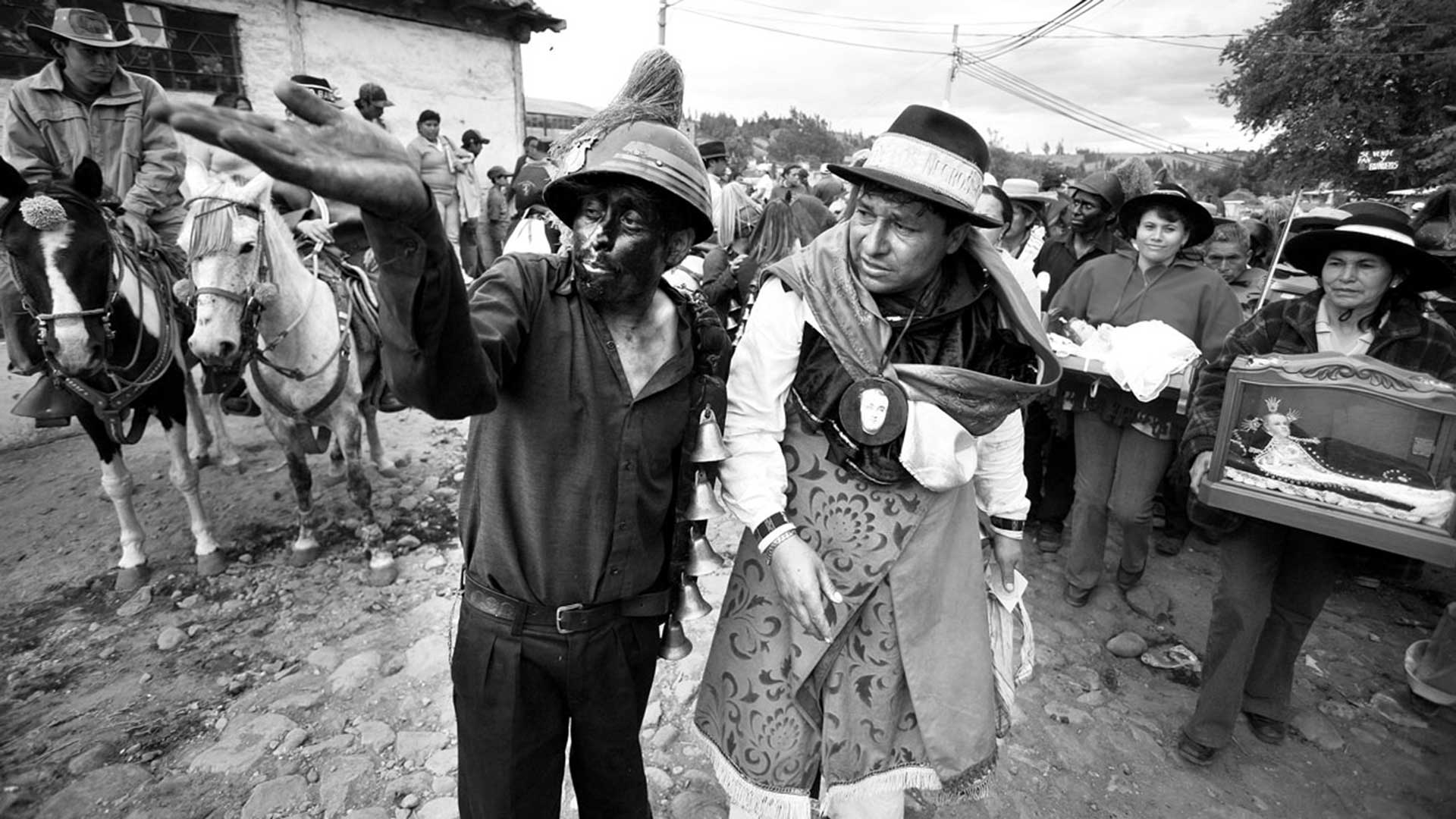 Folklore, dancing, drinking, orchestras and vivid rituals spin like a wheel around the devotion of the Niño Caporal, or Niño Carnavalero. It starts with the tour of the “montados”: men on horseback who pass through the town accompanied by hundreds of parishioners up to the house of one of the chiefs or leaders of the carnival, who prepare themselves a year in advance to receive some two thousand people. Men dressed up as women, the “doñas”, who give out drinks; the “negros”, who joke around jumping, summersaulting and sticking out their tongues, with their faces painted black, accompany dancers who carry the so-called crazy cows and village bands and basically liven things up. This debauchery is all in the name of the Niño Caporal who cures the sick and, despite being naughty, grants wishes to those who faithfully pray to Him.

Totoras is located a few minutes to the west of the centre of Ambato.

The immense bronze pans stand out, in which the celebration banquet (soups, grains and meats) is cooked.

The color black predominates: locals say that wearing black and painting yourself black represents the slavery of the past.

Twelve bells are hung to represent the twelve months of the year.

Dancers go around singing their mischievous folk songs to the music of the guitar. Watch out for the peculiar churo, a type of horn that is used as a siren. 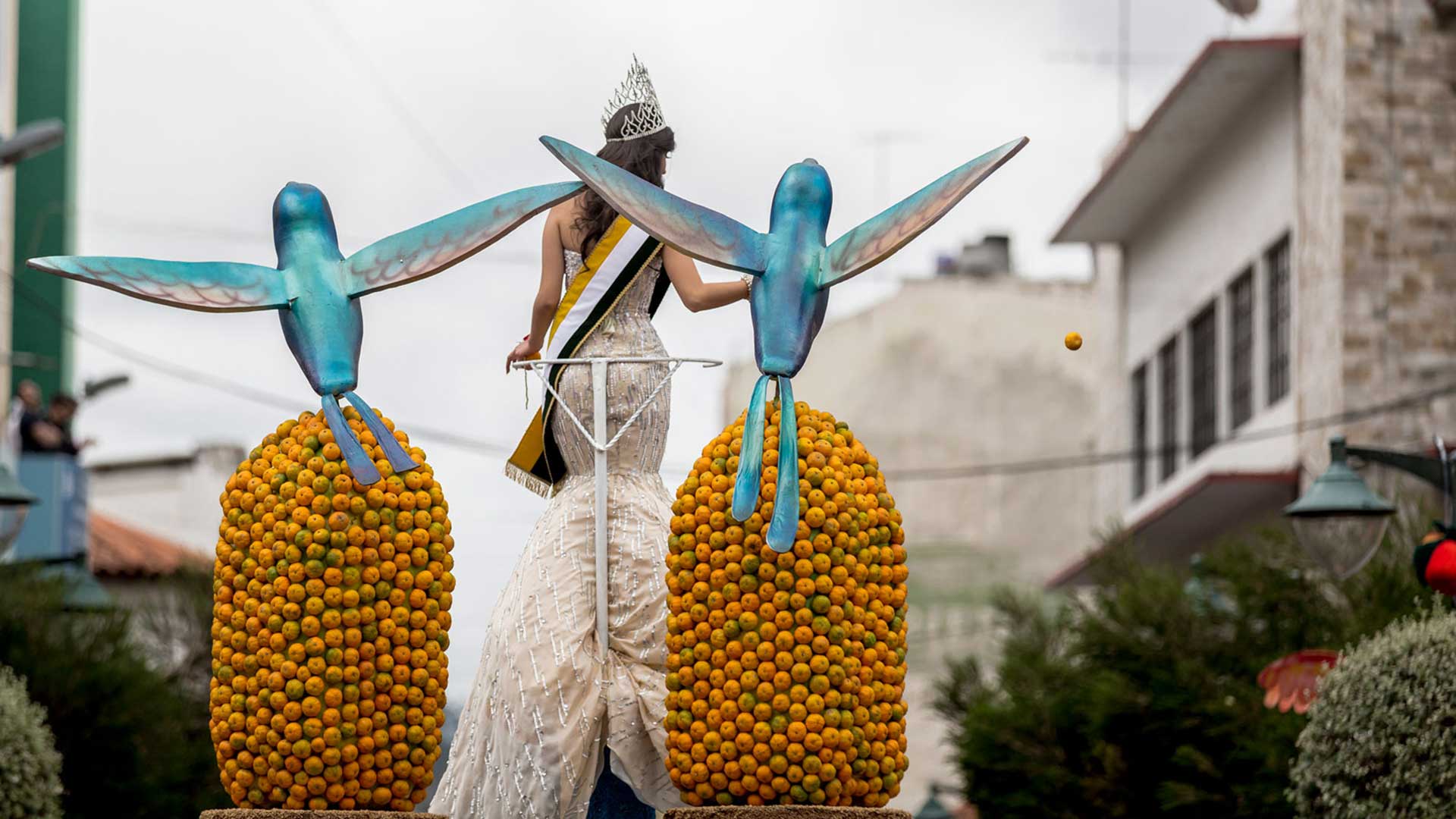 Celebration of fruits and flowers

As well as water (throwing it is strictly prohibited in Ambato, although the people do it anyway) two very particular elements are added to the game: flowers and fruit. There’s a tenuous link to the events of the year 1949, when the city suffered a devastating earthquake that forced its inhabitants to return and rebuild it from rubble. Ambateños celebrate the rebirth of their town according to the period of flowering in the months of February and March, which coincides with Carnival and ancestral festivities of the harvest cycle. The game with water was seen as an affront to the collective ambitions of the city: no-one should waste such a vital agricultural element in the city’s efforts to recover from the most difficult moment in its history.

The election of “Miss Carnival” is an event in itself and people from every walk of life congregate in the Coliseo.

In the four days of festivities, more than 100 cultural events take place, including the Merced (Our Lady of Mercy) bull-fighting fair.

The parade of floats (decked out a year in advance) and troupes travel 16 blocks (both up and down).

The beauty queens of every neighbourhood and the city wave to the crowds and throw fruit, from plums to watermelons. The queen of Pelileo (a major local denim producer in Ecuador), throws pairs of jeans which people (inevitably!) fight over.