Borbón, capital of the marimba

Borbón was once a land of wood and water. Back in the 1980s, when there was no electricity in town, the tide lapped against a rickety boardwalk reminiscent of a marimba, as, early in the morning, the clanging of this very instrument echoed over the river that ran past the village, sprinkling it with sound. Guillermo Ayoví (aka Papá Roncon), Hernán Ayoví (deceased in 2016)… are legends. They’d beat on the wooden keys to receive the morning with the syncopation of a long-forgotten land, and the entire town would open its eyes, with dreams ringing in their ears…

One can see vestiges of those days walking the city today. No longer can we find only dugout canoes rowing past, and the vast majority of the boats churn the water with outboard engines. Washing machines stationed in the middle of the street offer outdoor laundry service, rattling to the rhythm of radio stations that compete for the voters’ attention, while other speakers send beats from one sidewalk to another. Now the boardwalk is cobblestone and a few streets are paved.

But many are still old dirt roads. And we can still see the original two-story riverfront homes made of wood that can barely stand, clasping a neighbor’s cement wall. Across the way lies the majestic jungle. And three rivers that flow from it. The view is spectacular, an epic act of nature. This has certainly not changed in centuries. 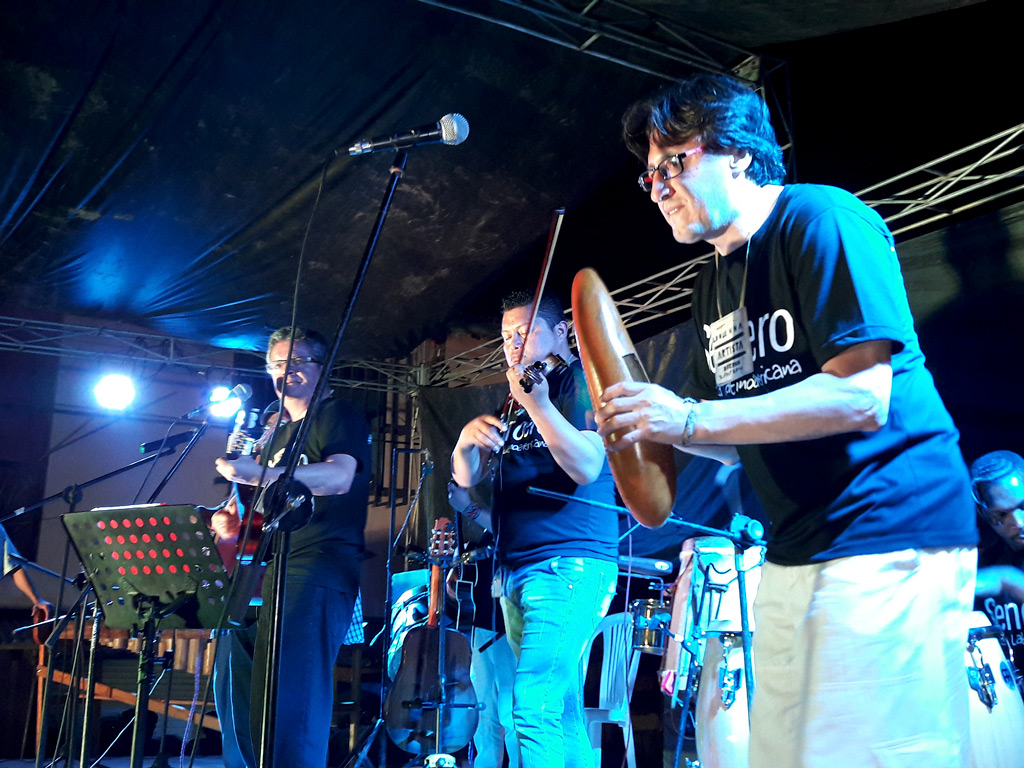 Every November 2nd, Borbón gets fired up with its yearly Marimba Festival. Photo: courtesy of Madera Metálicos.

“As soon as we would wake up, we would run to the marimbas,” says Daniel Ortiz, “we sat there listening… hypnotized.” They were youngsters enraptured by the rhythm of their ancestors. “Today,” says his colleague and friend Juan Pablo Garcés, “many understand marimba music, but we are the very few who really dedicate ourselves to it, to transfer its art to future generations. Many of the kids back then are now lawyers, doctors, salesmen, teachers… and many can still play marimba, but we decided to make this our lives.”

Juan Pablo and Daniel have their workshop on the riverfront. Painted on a wall are the two Ms signaling “Madera Metálicos”, their company that is many things at the same time: a music ensemble, an events organizer, a marimba factory, a music education workshop and cultural association that among other things organizes festivals, publishes books and prepares local school teachers in rural towns to teach the basics of black music to their young students. All this is the result of those early years when Juan Pablo and Daniel would run to the marimba as soon as they were woken up by it, an act innocent and natural in a place like Borbón in the 1980s.

They were around six years old. Papá Roncón would be playing as they got comfortable: an eager audience that soon wanted to learn how to magically make music from thin air… Papá Roncón would let them try. As he continues to today, at eighty, with toddlers and children of all ages. As he likes to put it: “everything I have in this world, I have to leave in this world.”

The kids started to learn. But getting started was really the easiest part. Learning the true secrets of marimba can take decades with a master like Papá Roncón. “He would start to show us something and then suddenly would go off and tell a story of when he was young or a joke and one had to stay there, respectfully listening to him until he was done,” Daniel and Juan Pablo recall.

A true Mr. Myagi-style education! And once the playing was mastered, it was another odyssey to try and get Papá Roncón to divulge the secrets of how to make the marimba and tune it to his unique scale. He would start from the lowest note but quickly diverted the attention until there was no other recourse than to come the next day. And he would start back from square one every time. “We just didn’t seem to be getting anywhere!” laughs Juan Pablo.

The road to marimba proficiency is long. But secrets that are worth learning, involve time, patience… and trust. Today, the apprentices have mastered their chosen trade. They can construct a marimba like that of Papá Roncón. But their desire has been to forge a path of their own. This is why they have created a line of marimbas on a C-scale, as well as the much more complex chromatic version. 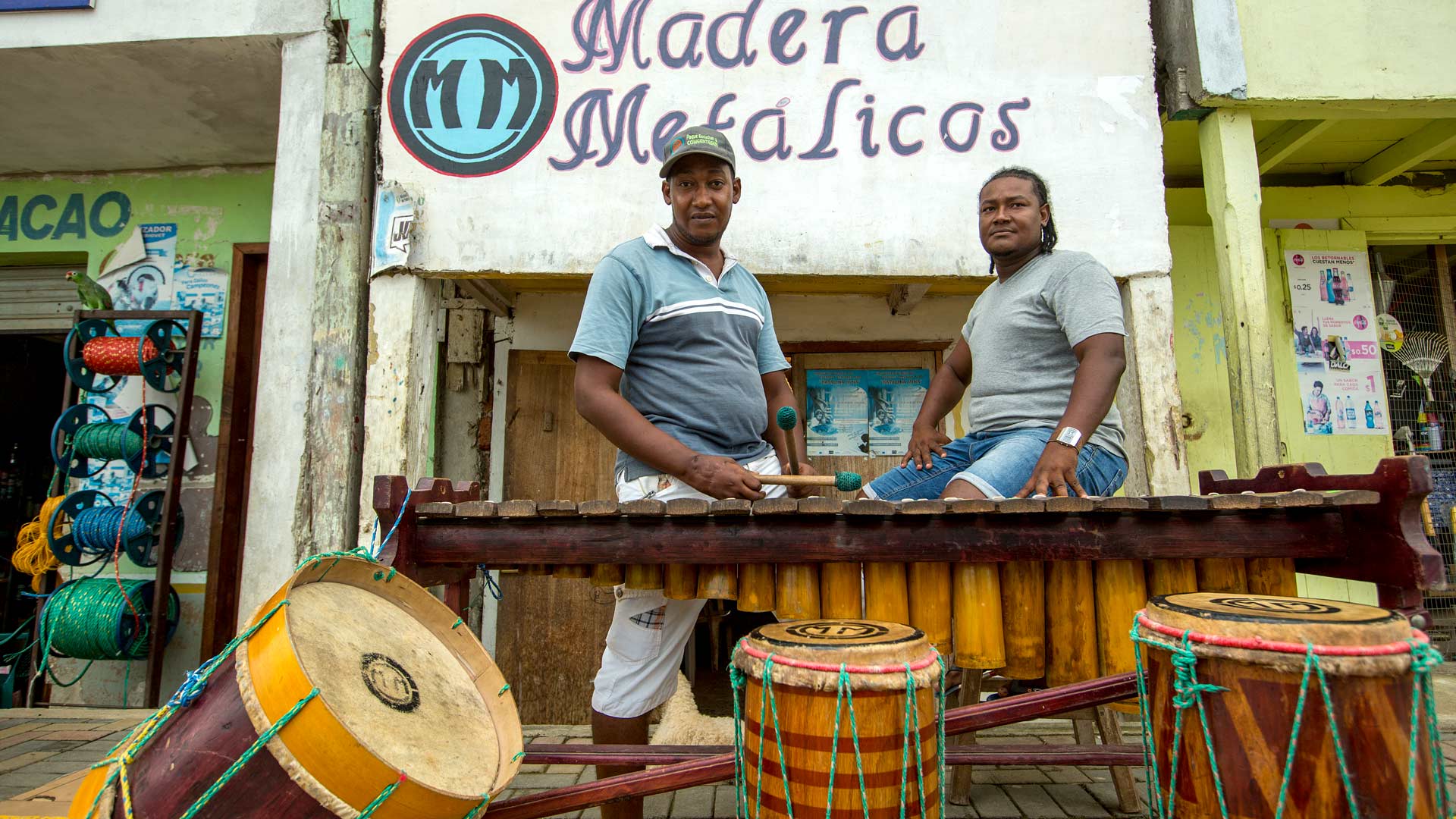 The marimbas are actually as portable as possible, reducing their meter and a half width, hardwood keyboard and frame to a roll convenient enough for one person to carry. And thanks to the fact that Madera Metálicos does not stop making marimbas, one can reach Borbón and simply point out the instrument he wants to take with him. Prices start at $800. You no longer have to place an order for an instrument that may take six or more months to ship. Although you may well prefer owning a signature Papa Roncón marimba, the emblematic hanging marimbas tuned to his unique scale will certainly become an invaluable collectors item.

Papá Roncon is a living legend, immortalized at the village park. He and his marimba stand as Borbón’s only monument. But it makes us even more proud and happy to know that his secrets and legacy will remain alive among us, here in this world, because students like Juan Pablo and Daniel keep them in their soul and will bestow them to those who, with patience and dedication, want to keep the marimba tradition alive.

Marimba terminology assigns “rhythms” to the different songs (with their own dance steps, as is the case of the agua largaand agua corta, the long and short “water”) known for its quintessential verse: “water will run free…”, which is one of the first songs marimba performances begin with, and is also a pattern used to tune the instrument (which would make sense, if, as they say, the entire musical genre was inspired by rivers). Other rhythms include the fabriciano, the andarele, the bambucoand the caramba cruzada, in which dancers “cross” each other as they move. The chaferiñais a devilishly fast-paced tune, and the careois the moment when dancers look into each other’s eyes as they dance; the bordón takes place when two people play the same instrument (a “four-handed” marimba). The chontaduro is the dark hardwood of which marimba keys are made out of; the guasá, a traditional (and very loud) shaker with forest seeds; and the male and female cununos are djembe-like drums. When the music is over, marimbas “are hung”. The musicians would, apparently, keep them in the highest part of the house, hoping the instrument would be infused with inspiration from the outlying forests overnight.