Behind the curtains of La Ronda

Commander Antonio Alomía’s tavern was not for everyone. Only intellectuals were allowed in; people like Eduardo Ledesma Muñoz, Enrique Noboa Arízaga, and Hugo Moncayo, who, in those days, were just young men ahead of their time. The Murcielagario, as Alomía baptized the dive, was the only hang out in La Ronda at the time, although you also had, a little further down, Ana Luisa Muñoz Jimenez’s house, where “tertulias”, social gatherings to talk politics, art and literature, were held. In those glory days, when La Ronda was the most inte-resting place in town, Amparo Carvajal was born: at the Murcielagario (The Bat Cave).

La Ronda is a small street in the Old Town. It was once Quito’s last frontier (it’s thought the name comes from the verb ‘rondar’ or to patrol, as it lay on the city’s southern limits) and like any marginal side of any city, it never attracted wealthy families or monumental architecture. In a Colonial world where churches were abundant, no chapel was ever allotted to La Ronda. And while no one came to cross themselves at the edge of La Ronda’s ravine, many were the men who came to get inspired. Thus, Amparito played at the doorway through which many novelists, poets, journalists and composers passed: today these figures adorn the list of prominent names in Ecuadorian literature, music and art.

“La Ronda was one of the enclaves that were at risk of being lost,” explains historian Fernando Jurado Noboa, author of several books on Quito’s streets, including the title La Ronda: Nest of poets and singers. Only 40 years’ ago, the historian allowed himself to take a slow walk down the street, because like many Quiteños in the 90s, he preferred avoiding the “state of disarray” into which the Old Town had sunk. “La Ronda was saved almost miraculously at a structural level, but had fallen into deep material and moral deterioration,” says Jurado, who speaks of his book as a cry for help to the city’s decision-makers. 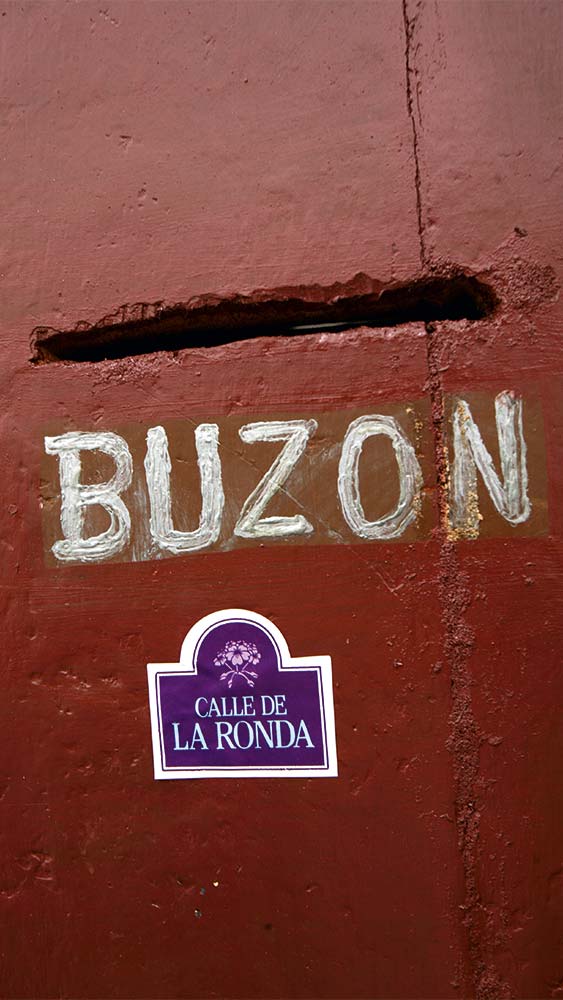 José García Moreno arrived at La Ronda in 1945. He was the youngest of two Guayaquil-born brothers who came to live with their aunt and uncle as a result of their parents passing. They settled in a seventeenth-century Andalu- sian-style house, one of the three that survive in the street’s first block, and before long, they had made friends, and had become addicted to the popular hervido de naranjilla (the “naran- jilla brew”, today known as canelazo). After a few years, when they inherited the house, the brothers decided to make use of the extra rooms and opened the first hostel in La Ronda, offering a modest stay for travelers who would later multiply with the opening of the Cumandá bus terminal, a few blocks downhill.

At the corner house on Calle Morales – La Ronda’s official name – and Guayaquil, the poet Alfonso Moscoso found inspiration for his famous poem “El Viejo de la Esquina” (“The Old Man on the Corner”). It was perhaps these twenty verses, written in the early twentieth century, that revealed La Ronda’s muse, which would become more and more apparent over the next 40 years. By 1931, if you were an artist, there was no better place to spend a cold Quito night than at house number 963. The owner, aforementioned Ana Luisa Muñoz, had inherited the huge house that many have called the most beautiful of La Ronda, as a fourth-generation heir. There, she decided to host a “Bohemian literary café”. In other words, poets would splurge in melancholy and recite their verses, drink, chat, and initiate intellectual controversy. Inspiring local artistes such as Jorge Carrera Andrade, Augusto Arias, Sergio Aguirre Mejía… Mejía made Ecuadorian history with his traditional pasillo-style song “La Negra Mala” (Wicked Black Mama), dedicated to Ms. Muñoz herself. The composition was such a hit, it reached the farthest and most unexpected corners of the entire continent.

Ms. Muñoz witnessed the burial of most members of her generation. At the age of 94, in 1992, she wrote her will, in which she gave up her family’s great house to the Italian congregation Misioneros de la Niñez. Thus, a chapel was finally erected in La Ronda. Modest and almost always empty, the chapel marked, somehow, the end of an era and the beginning of a series of profound changes that have trans- formed the street.

Amparito Carvajal was relieved when the Muni- cipality announced the rehabilitation of La Ronda. The years of El Murcielagario, when she was a child, brought her fond memories, and it was these that persuaded her husband, years later, to buy the corner house where Amparito was born. Her children did not have the neighborhood life that their mother had hoped. The street no longer attracted intellectuals. It had ceased to inspire, and uninspired, the inns and taverns became veritable dens of iniquity.

Upon completing the restoration of the street in 2006, this “horseshoes’ path”, as it had been called back in the day, sported new cobblestones, walls with fresh paint, houses completely renovated and open to the public, special lighting in the tunnels, balconies with colorful flowerpots, and new streetlights, made expressly like the former ones. 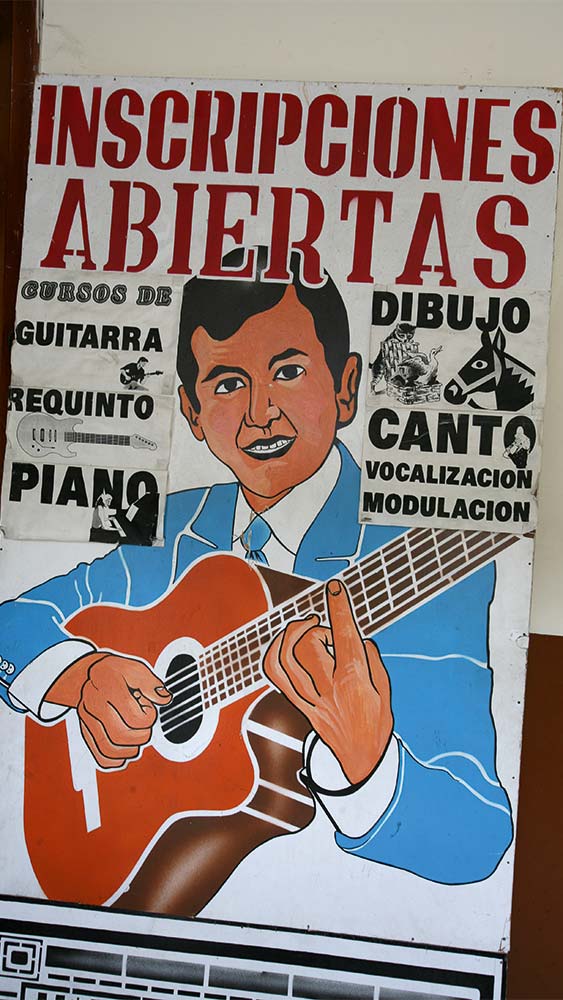 Resurrecting La Ronda, resurrecting what symbolized in its heyday a true poetic margin of society, has been somewhat of an elusive dream. How can we transplant the inspiration of centuries past? How can we guarantee that the decades of mayhem and prostitution are forever gone…? The efforts to bring La Ronda back to life have been extensive, and necessary, as they seek to extract the positive aspects of an urban icon such as this, an urban icon that marks the beginning (and the end) of a city. And yet, there is the feeling that it has also become a parody of itself.

This new “Colonial Quito” proposes a scenic stroll along the cobblestones of old, hemmed by the adobe, white-walled, tiled-roof homes with pretty geranium-clad balconies, all of which are pitted against the anachronisms of our time: souvenir shops, karaoke joints, actors posing as historical figures and marching bands hired to give color to something that is not what it used to be. And amidst it all, you cannot miss the giant empanada, the delicious canelazo, feel what it might have been to be a long-lost romantic in the early 20th century, pay a visit to a neighborhood imperishable such as Humberto Silva, the tinsmith…

By day, the municipality has sought to inject life into the street with its “Manos en La Ronda” project, created to highlight the artisanal talents of Quiteños. Most seem perplexed by the unusual street installation of “traditional games” animated by young costumed ado- lescents who instruct you how to play them. The prettier houses have been converted into spaces for craft shops and contemporary design stores, which include a wooden-top maker, an artsy bakery, a chocolatier, a honey store, a clothing boutique inspired by the art of Ecuadorian painter Oswaldo Guayasamín; there is even a stage set up for indigenous-influenced dance performances. The offer was handpicked by the city’s Tourism Bureau, most of which does not belong historically to the neigh- borhood. They’re there to reel the visitors in. Yet most visitors seem more into the nightlife. 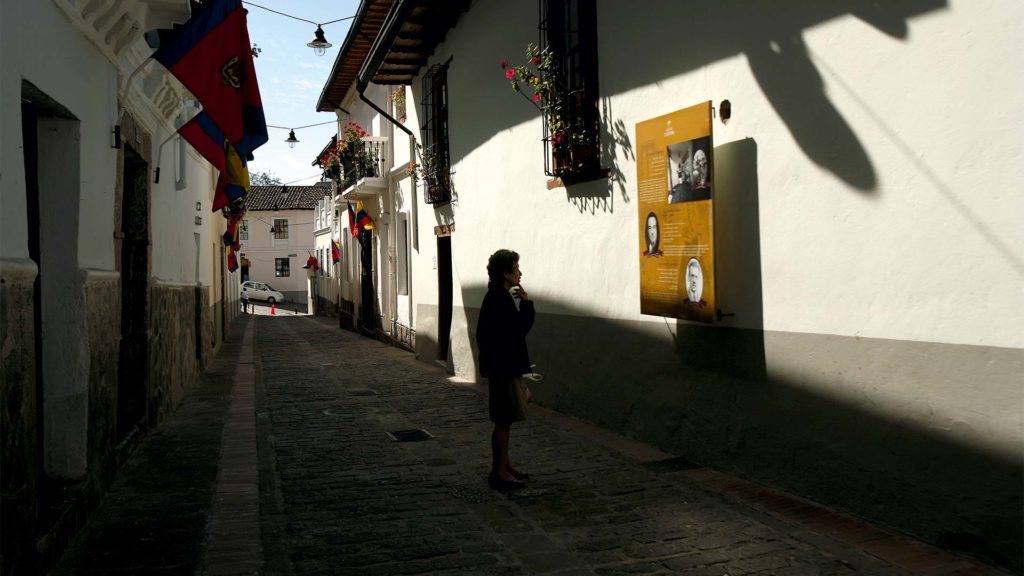 Seizing the opportunity, Victoria Carvajal, daughter of Amparito, opened a café on the second floor of her house. Neighbors soon followed suit. If famed Ecuadorian song-writer Gonzalo Benitez (p. 50) were alive today, and visited the street he made his serenading domain with his voice and guitar, he would have to compete with the cacophony of bars and the beat of unrelenting stereo systems. In just a decade since its restoration, the street has slowly unleashed itself from the Colonial corset it was first trussed up in, and is now taking its own capricious turns. We may soon learn that the story of La Ronda does not, in fact, live on the street at all: it fleetingly flows in the words of Benitez himself, “behind a curtain of years”.