And they shall cook, long and slow

It’s 11:30 am on Friday, June 25th, and at the Chachalo family house conversation flows. Yolanda, María, Marina, Edison Chávez – a cousin – and a friend, a kid from Quito with the typical city rocker look, are stretching their arms over the fire that slowly roasts a gaggle of guinea pigs previously given the go-ahead for their “respectable” size. On the residence’s washing stone, Juan, José and Federico, whom Marina and Amable later join, cut 150 legs of cattle with a knife the size of their forearms.

They will cook the Ecuadorian cure for a hangover long and slow here: caldo de pata (cow hoof broth).

Rosario Chachalo, 65, the matriarch of this family of eight, shuffles with effort to supervise each set piece where this important occasion is being assembled: this year, her son Amable, 38, will be a Prioste de la Rama de Gallos (The Head of the Roosters’ Branch) for the first time during the San Juan de Zuleta festivities. This marks a historical event for the family. Because of this, and because Amable was elected Community Director of Zuleta by popular vote last March, the Chachalos want to look good before and after the party: they receive the 500 visitors generously up until it is time to triumphantly walk through Hacienda Zuleta’s doors, to mark the fiesta’s grand finale. 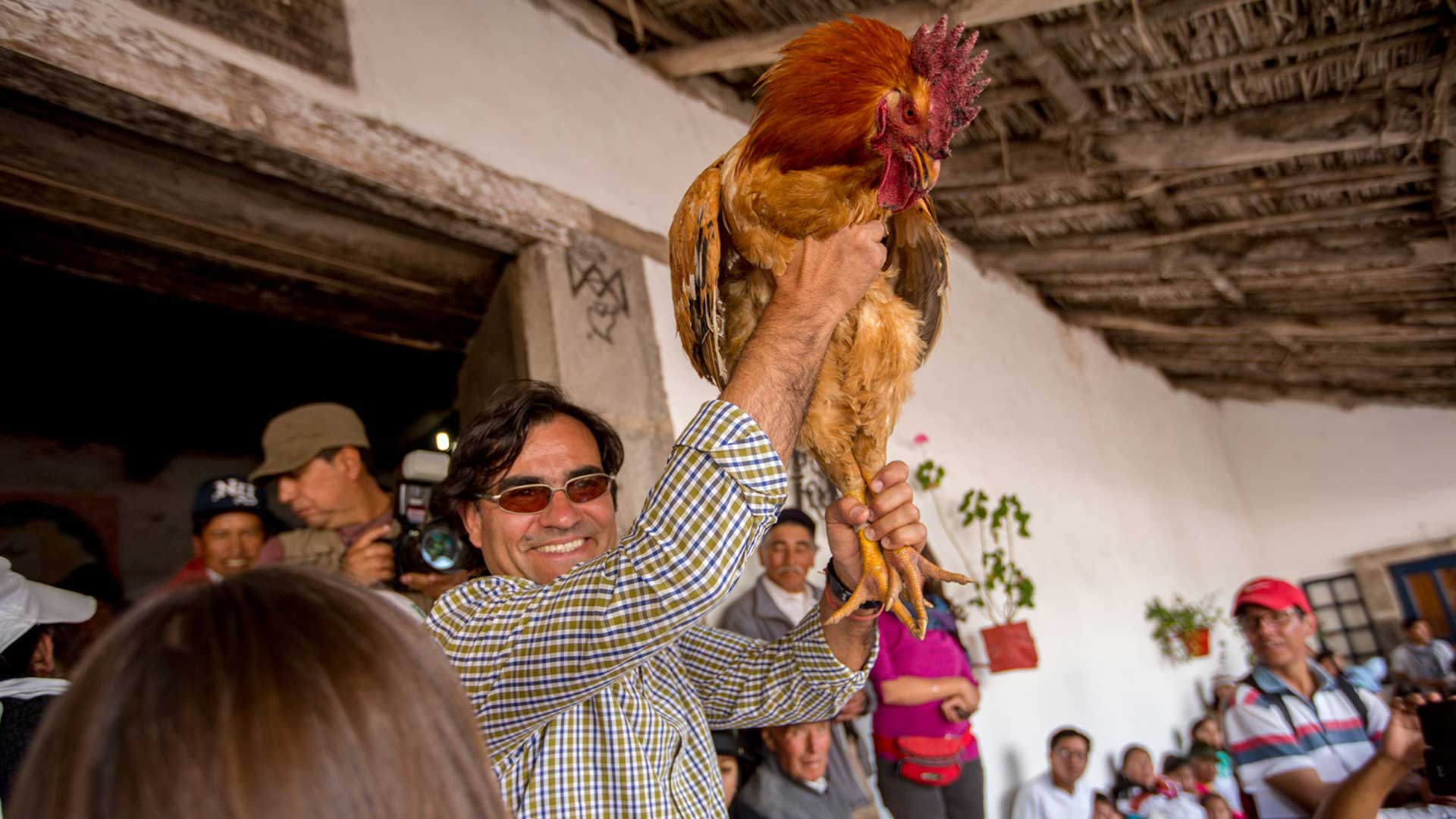 In large tubs and plastic buckets, 70 hens and 570 pork chops await their fate. Hands abound to give flavor to the feast. Culinary prowess is undoubtedly one of the Chachalos’ and the valley’s great talents, something that has helped the communities of Zuleta prosper. The valley is named after the hacienda founded by the Jesuits in 1690, which became the property of former Ecuadorian President Galo Plaza Lasso’s family in 1898. Until midnight, brothers, uncles, cousins, compadres and friends from Quito and Ibarra continue to arrive. He or she who walks in, puts on an apron and gets down to work!

And they shall dance on

There’s an unspoken rule that no-one can arrive empty handed. Don Segundo’s comadre, for example, a humble woman with the páramo sun streaking across her face, offered a fat, white hen. She received two containers of “champú” (shampoo… a thick, unfermented corn drink) in return. She poured them into a large metal container to carry home, along with two baskets of fruit and bread made with Zuleta wheat, as is the tradition. She, like the others, also accepted a bowl of homemade chicken broth from the host family. Soon, fireworks will fill the sky with a loud clatter, as a wake of cotton-like clouds fleet over the mountains. Like the other priostes (party organizers of the Nine Rooster Branches), Amable lights his own, announcing it is now time “to work”.

San Juan is the fiesta of giving and receiving. As in the land, it is sown, the seed is placed, then harvested, in San Juan one shares and works to later sing, dance and play. 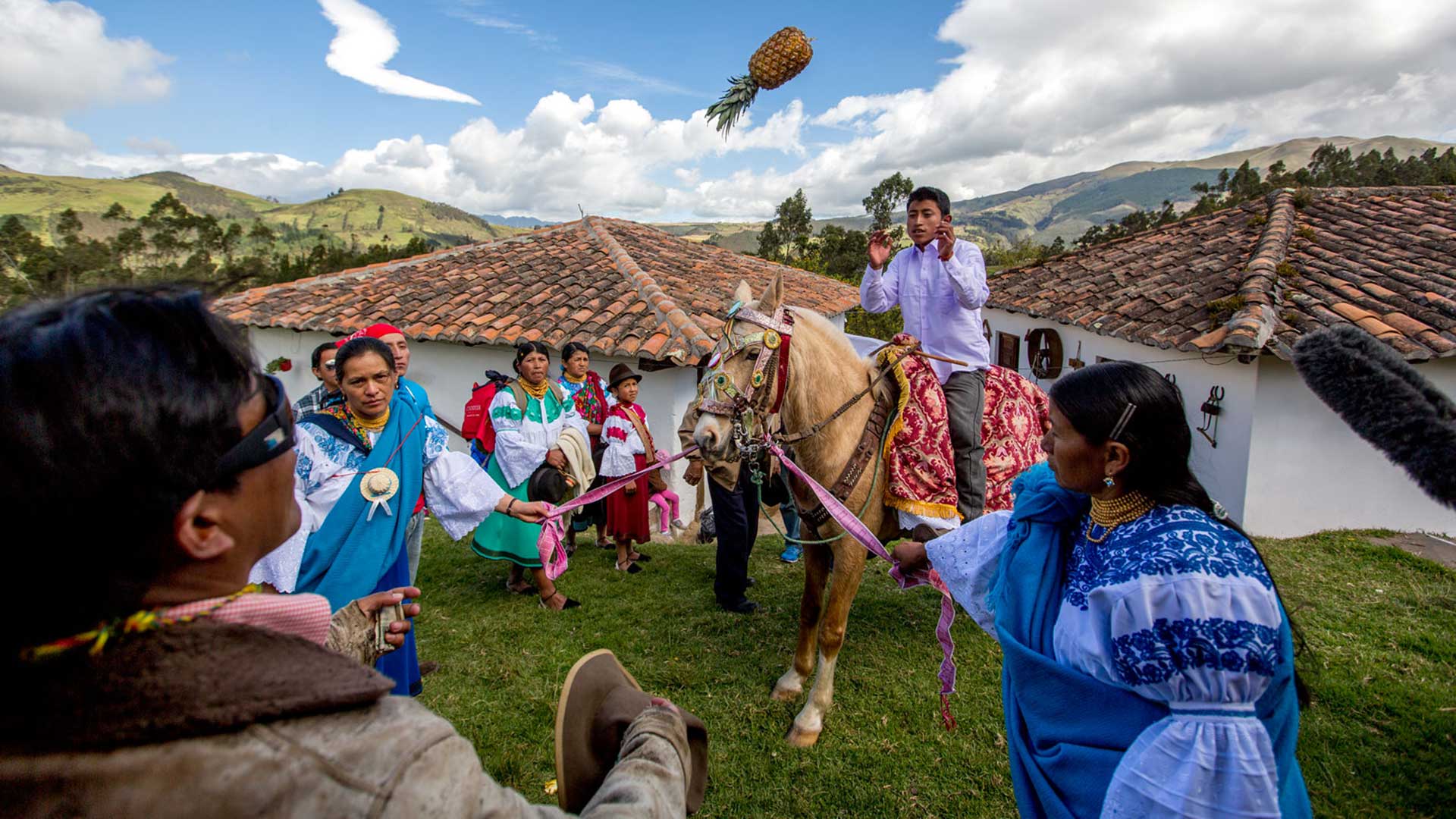 The night turns blue and dancers and singers in their best outfits begin to appear on the horizon, kicking up dirt with their feet as they stomp to the music, their silhouettes like a mirage.

Move along, move along my darling”…

Thus begins the ‘work’, which in the picaresque fiesta lingo means to dance and sing from house to house in exchange for liquor, chicha and a chance to play the game of the castillo (castle), a unique structure placed on the ceiling from which fruit, bottles of liquor and money is hung. The participant who is able to lower a prize for himself must return it threefold during next year’s San Juan. 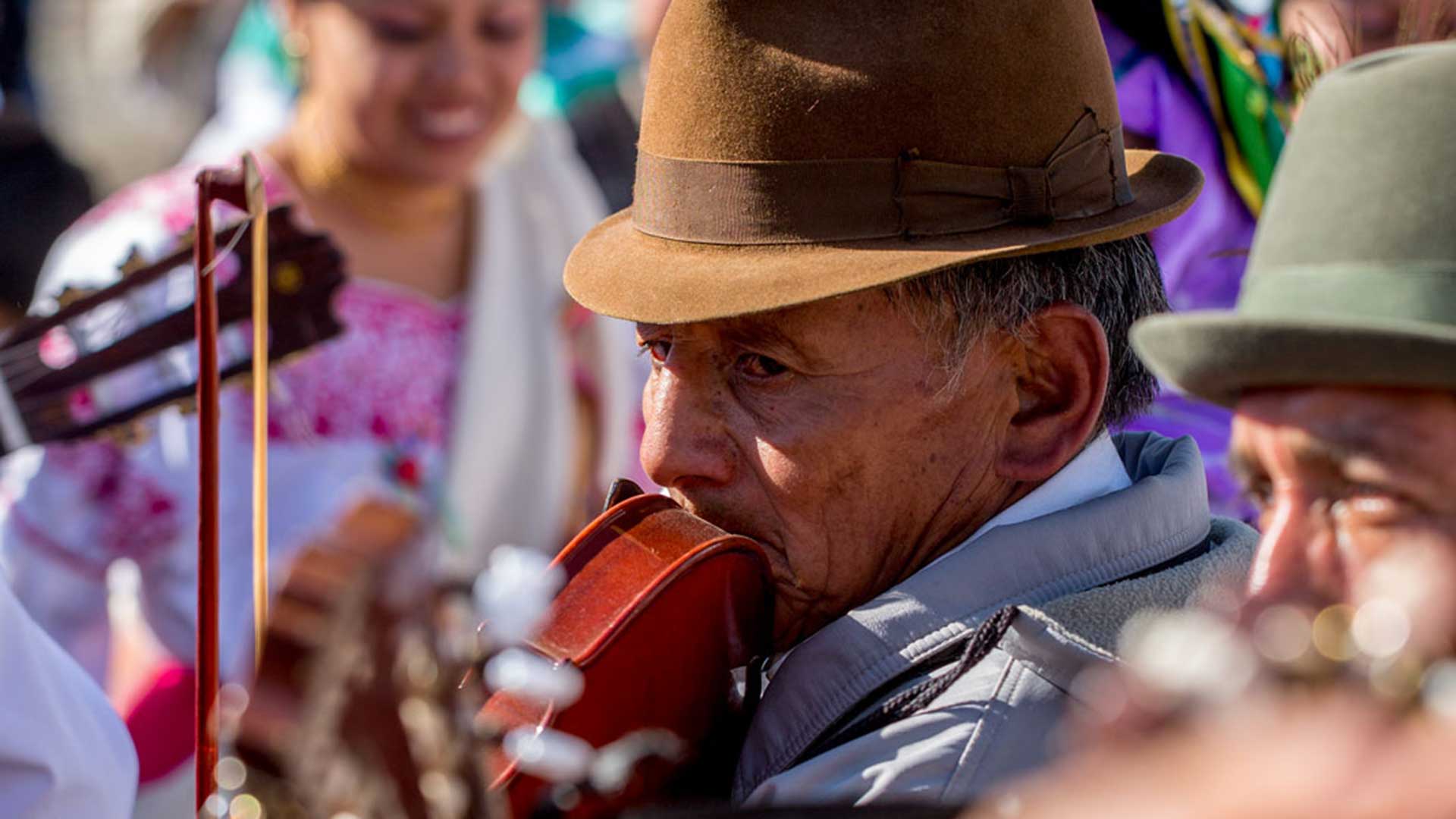 Men strum their guitars while they walk, playing other stringed instruments such as mandolins or violins, the rondín (a kind of harmonica), flutes and sometimes a horn, while women of all ages sing along with their half-shrieking voices, singing songs that have something of tradition and a lot of ad lib as they add phrases which, according to some, become “more sensual” as the night ensues…

“Zuleta of my life, land where I was born

Zuleta of my life, land where I was born

Where I dance the sanjuanito drinking

Where I dance the sanjuanito drinking

A combination of the moonlight and songs repeated over and over again mantra-like, create a trance-like bubble throughout the region for everyone from locals to visitors from nearby communities, nearby cities, the capital, or the world to feel enveloped in – a single circular dance that kicks up the dust in fields, on roads, in front of homes… The party is an arduous task, sustained with intensity: legs and feet move to keep the spirit from faltering.

The festivities to celebrate Saint John the Baptist (San Juan Bautista) take place on the Saturday closest to June 24, after Inti Raymi (the Sun festivities) and before the fiestas of San Pedro and San Pablo (St. Peter and St. Paul), the last important indigenous summer celebration in northern Ecuador. Every year, it’s the occasion to come together, both for residents and the many descendants who have migrated to the city.

They shall enter the hacienda

Apparently no one heard the roosters, because fireworks began at nine and not at six as Amable had announced the day before.

In the midst of the hangover, like the Magi, the three Rooster Priostes arrive at the Chachalo’s house, bringing six live roosters with their feet tied to a stick. They leave them in their neighbor’s corral.

At 12 noon, there are already 18 roosters (12 of which are to be delivered to the Hacienda) and everyone gathers under the cover of a huge white tent with chairs hired for the occasion, where they receive their ‘medio’ – a large dish with two or three guinea pigs, potatoes with peanut sauce, and chicken, offered exclusively to the priostes who have been great contributors during the festivities. The Fireworks Prioste is in charge of announcing the deliverance of the Horse Prioste, who trots on an elegant horse decorated with rugs, mirrors and ribbons to transport the roosters to the hacienda. Among them, a 13-year-old boy chosen to give “la Loa” (the prayer), a biblical passage recited before the hacienda owners when offering the roosters and receiving in return several liters of chicha liquor, and a symbolic payment for each rooster, as well as trout, cheese and wheat. 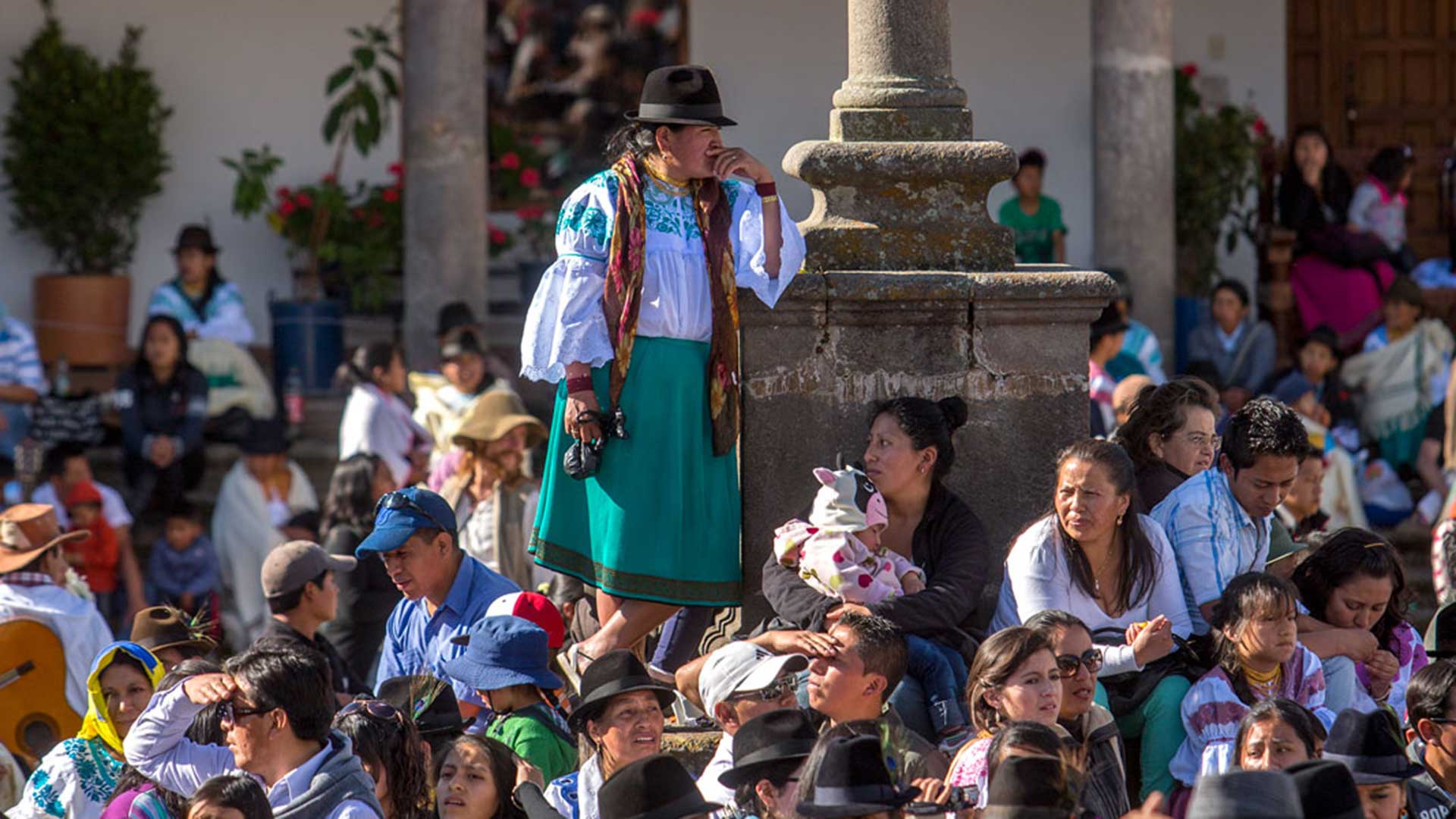 Amable, who hid his hangover behind sunglasses (and a leather jacket), led his Branch into Hacienda Zuleta, wheeling round the majestic cobblestone plaza twice, singing, dancing, throwing sweets and oranges. The group comes to a stop under the balcony where Margarita, Galo Plaza Lasso’s youngest daughter, is waiting. “When I die, come into the hacienda, I’ll leave everything there,” they say Don Galo told them before he died.