It’s only 60 km from Quito: one hour, maybe an hour and a quarter. But in what feels like no time at all, you can come face to face with Antisana, arguably one of the most special places on the planet. First of all, there’s the Andean Condor. A lava flow turned to stone, known as Antisanilla at the foot of the volcano, is home to one of the most important communities of this emblematic and threatened bird.

Then, there’s the creature than Olivier Dangles named “the polar bear” of the Andes: a humble fly. In this biodiversity hotspot of species, that thrive within the murky waters that splurge from the glacier, a highly endemic fly, found only in those same Andean streams, buzzes.

These waters join up with some less muddy, less biodiverse streams, and alter its composition. It continues on its surge down the Andean hillside, revealing the ecologic dynamics affected by the melting of the glaciers, an undisputable mirror of climate change.

Antisana, you could therefore say, is a thermometer of Andean biodiversity. Scientists also established a glacial laboratory in Antisana, an observatory that has provided updates on its glacier for more than 25 years of study, a privilege for glaciologists and a significant scientific heritage for the rest of the world. 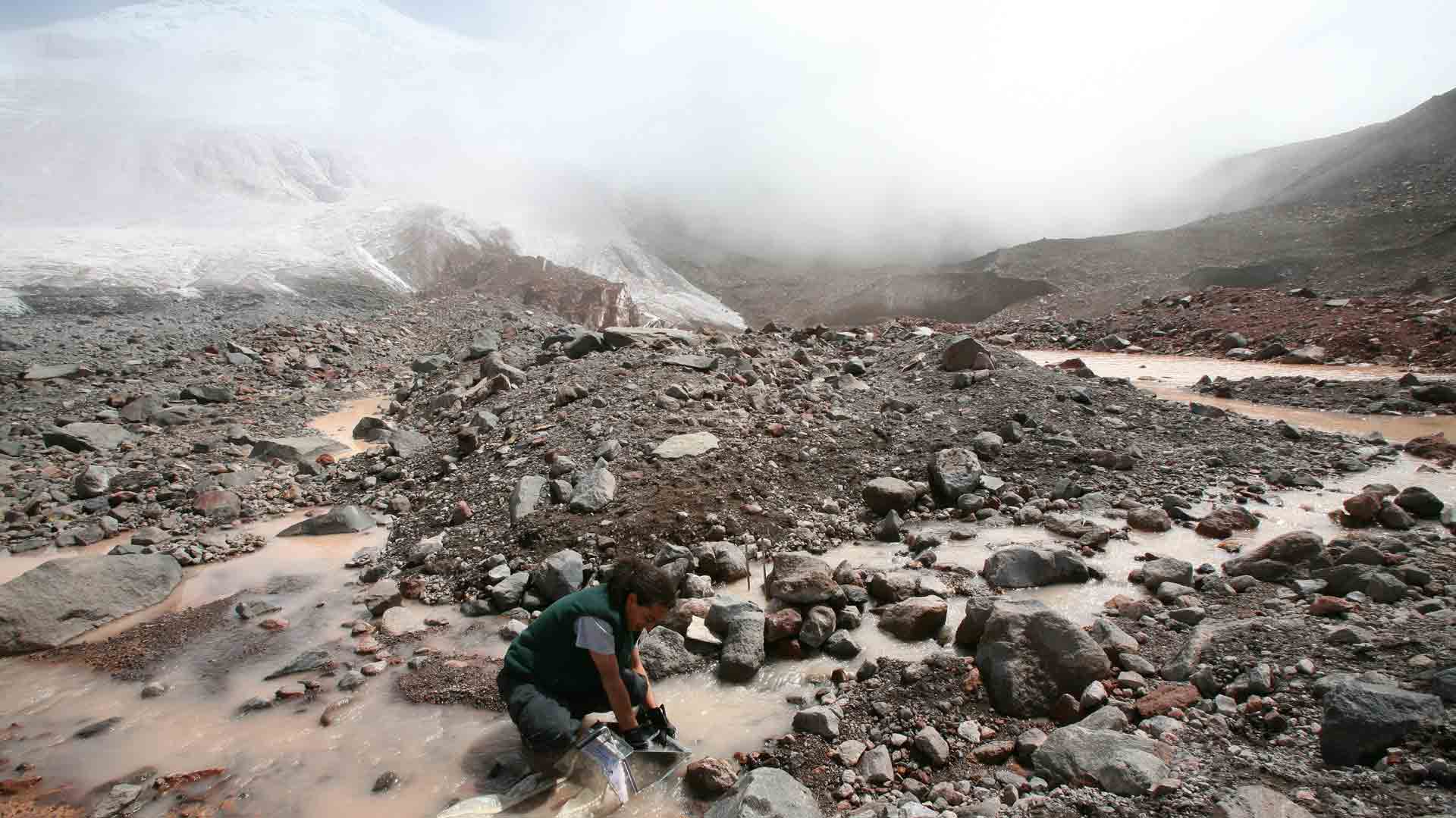 Whenever we gaze at the snow-capped peaks that guard our horizons, we search for signs that might refute the irrefutable: that each time we look, there is even less ice. The stories of the old mountaineers haunt us relentlessly: how in the 1950s they would climb Carihuairazo with crampons, or try their luck with skis. Today, Carihuairazo has no snow, much less glaciers.

Over the last few decades, students of the melting ice have kept pace with their subject. Today, there is a set of techniques that allow scientists to glean information from the glaciers about their relationship with the climate of the past, present and future. Thanks to a combination of aerial photography, bore- holes, measurements and isotopic analysis, we can reconstruct the history of Andean glaciers and create projections for the future.

We know that our glaciers represent a negligible segment of what glaciologists call the cryosphere – the coverage of ice over the planet. But studying them has revealed their high sensitivity to changes in climate, which makes them excellent gauges.

This has been the most obvious sign of global warming for those who live in the equinoctial regions. My children don’t even know what a frost is; I remember them as an occasional novelty; yet for my parents they were part of everyday life on the school run. 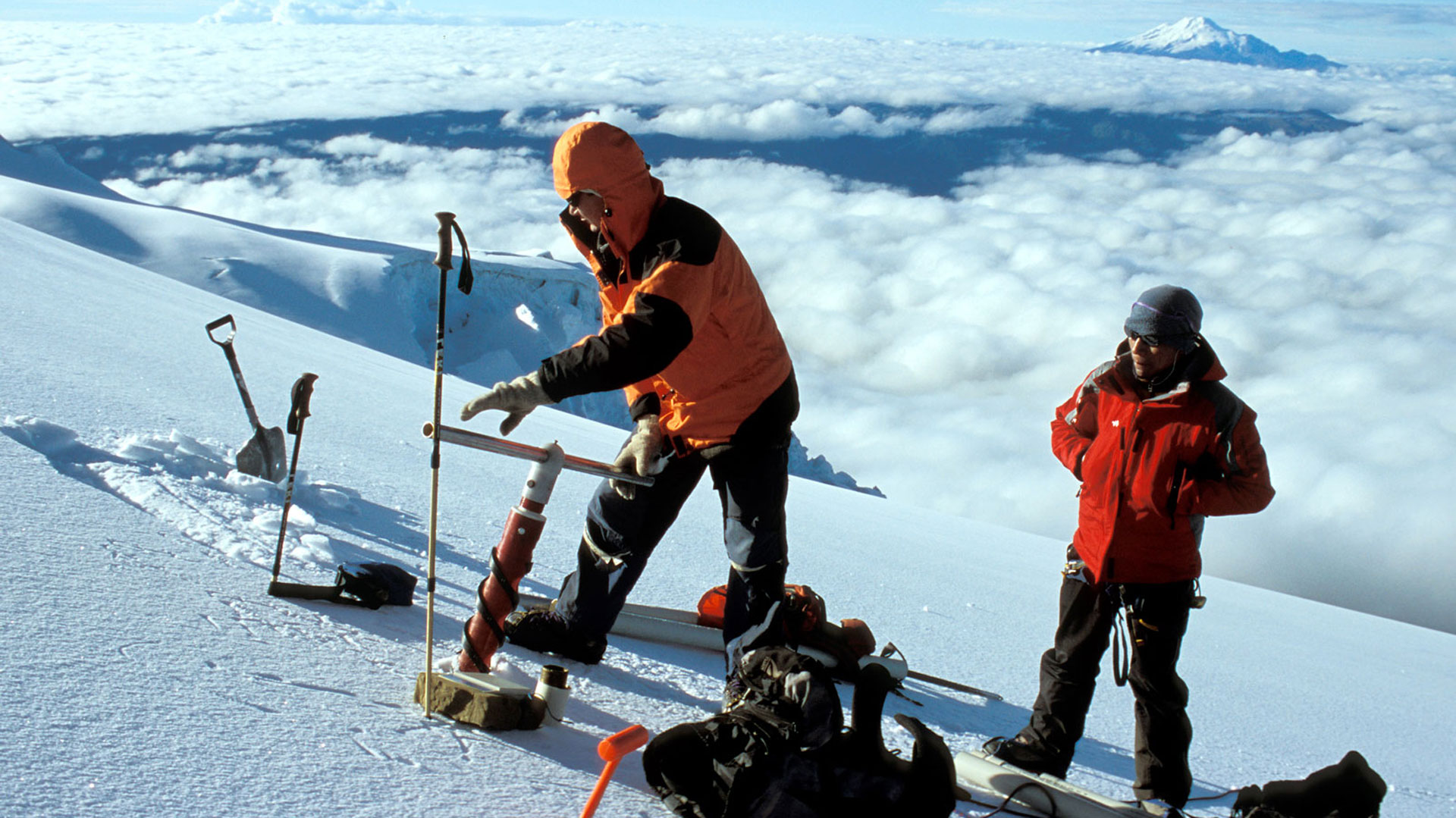 The IRD began the Great Ice Project more than 20 years ago, monitoring the glaciers of the tropical Andes, in collaboration with local partners like the INHAMI and EPN. The project in Ecuador carries out periodic investigations on various snow-capped peaks, and has made a veritable laboratory of Antisana.

There, teams measuring the vital signs of two of its glaciers have set up shop, keeping tabs on climatic data and the streams that pool at its feet. Twice a month the scientists take samples, sketches, and measurements of the terrain.

Thanks to studies like this, today we know that Andean glaciers remained stable until the beginning of the XXth century and that, beginning in the 1950s, they began a noticeable recession. At the end of the 1970s, this process dramatically accelerated.

Nostalgia aside, we will have lost a fundamental aspect of our touristic appeal, and above all, our water provisions.

Until now, these losses have added up to between 30 and 50% according to the volcano; and the permanent snow line has risen an average of 300 meters. If this trend continues, by the middle if this century the majority of Ecuadorian glaciers will be reduced to a memory.

It is estimated that 4% of water guzzled by Quito each day is directly reliant on the glaciers of Cayambe, Antisana and Cotopaxi volcanos. Some 300 liters a second is rather more than just an uneasiness of the sentimental kind…

Rubén Basantes came to Ecuador from France after completing his PhD in glaciology. He was ready to put into practice everything he had learned in the mysterious field of geodesy. Most of us don’t even know what the word means, but for him it means he can measure the fluctuations of ice on a mountain and interpret the information to discover how climate influences the behavior of glaciers.

“The fact that a glacier recedes is not enough to conclude that climate change is affecting it,” Basantes explains. “You have to use further variables such as mass balance, to know how ice lost in the lower part of the glacier compares to the ice present at the top, due to precipitation… the comparison of the two gives you that balance… And for that, we must consider the geodetic data”. 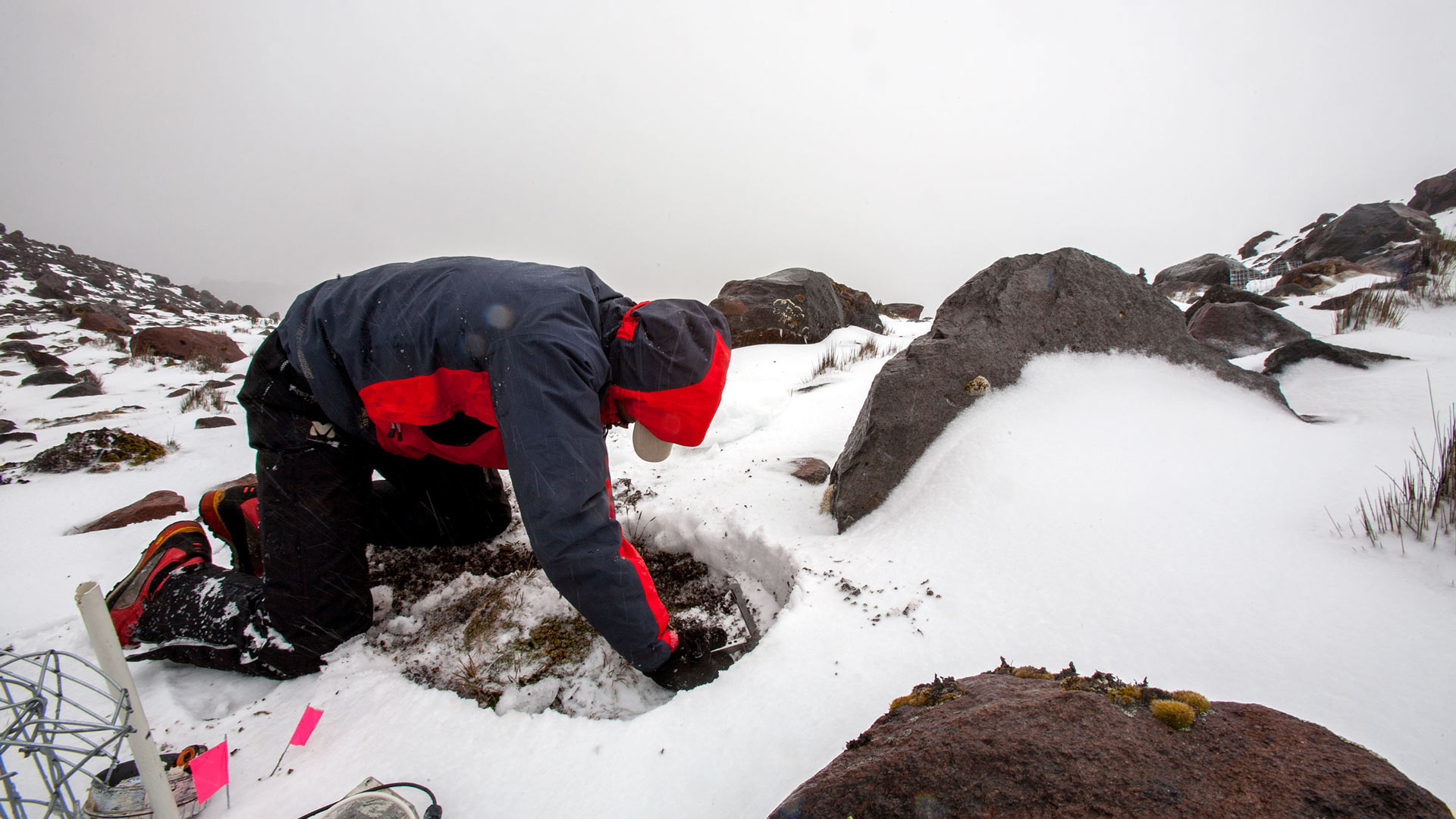 He used satellite imagery and GPS data, as well as rainfall and climatic variables from 1950 to 2012 to reach his conclusions, adapting historic data to current technology. A year and a half later, he obtained his first results.

In years before, glacier study in the Andes had overestimated mass loss. It was believed that it was receding at the rate of almost a meter per year. Basantes found that, while mass loss existed, it was only 25 cm per year, which is almost three times less than what was previously believed. That certainly does not mean we are A-OK. Glaciers are not hunky-dory, and climate change is most certainly real.

In his doctoral thesis, Basantes studied nine of Antisana’s seventeen glaciers, seeking to identify climatic influence, and where this influence occurs.

“Over the last 20 years there has been a process of increasing rainfall in the mountain range that has meant that glacier loss in the lower parts of the glacier was then compensated for at the top, due to this precipitation. The impasse we have now is that meteorologically, we are still behind in terms of information in order to confirm the hypothesis,” he explains.

Nature is remarkably adaptable, and natural balance can be stranger than fiction. Ice compen- sation, for one, is something to behold. That said, 25 centimeters can still make the world of difference.

Just think of an ice-cube in water. When you first start drinking, it remains strong, keeping your drink cold, but as it reduces in size, it does so exponentially. At the end, you can virtually see it fade into nothing. This can only be good news if we take it as an optimistic alarm bell. 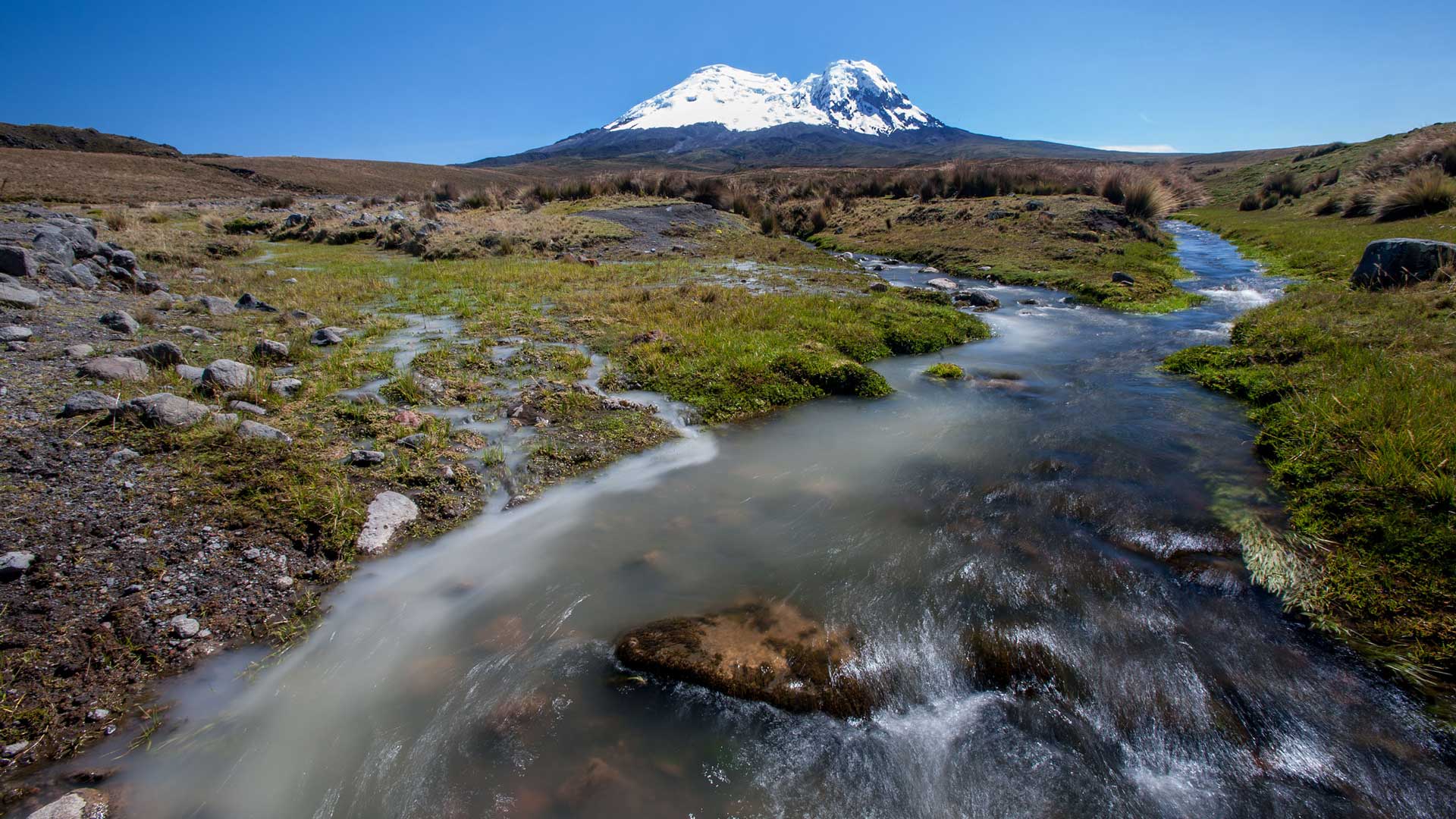 It may give us a little more time, perhaps, to really make a difference: save our glaciers and save our liveli- hoods as we know and cherish them.