An airport after Humboldt’s heart

If the indefatigable Prussian Baron were to return magically 200-and-some years after his initial visit, taking direct time-travel transportation from his far-and-away nineteenth century to Quito’s International Airport in 2019… what would his reaction be?

He’d obviously first be astounded by the coming of the jet age, by the rows of gigantic flying contraptions, the smooth asphalt of the runway, the 40-meter-high control tower, the swish glass and stone structure. Second of all, it’s likely he would remember the plateau of Tababela where the airport is located from his travels and from the descriptions of the French Geodesic Mission that surveyed the area over 60 years earlier (who had named it “table belle” (beautiful table), so happy were they to find a piece of flat land amid the crumpled geography of the Andes!).

Following his initial wonder, the inquisitive Baron would no doubt have started asking questions. How many planes arrive every day on average? The answer: 143. How many people use the airport in a year? 5.2 million. Can they eat inside the airport? Yes, it boasts 14 food outlets in the terminal building. How does the security scanning machine work? With X-rays and electricity! How many people work there? Around 8,200 are directly employed. And, being the father of ecology, he would undoubtedly ask “What measures has the company who runs the airport taken to conserve the environment in which they operate?” 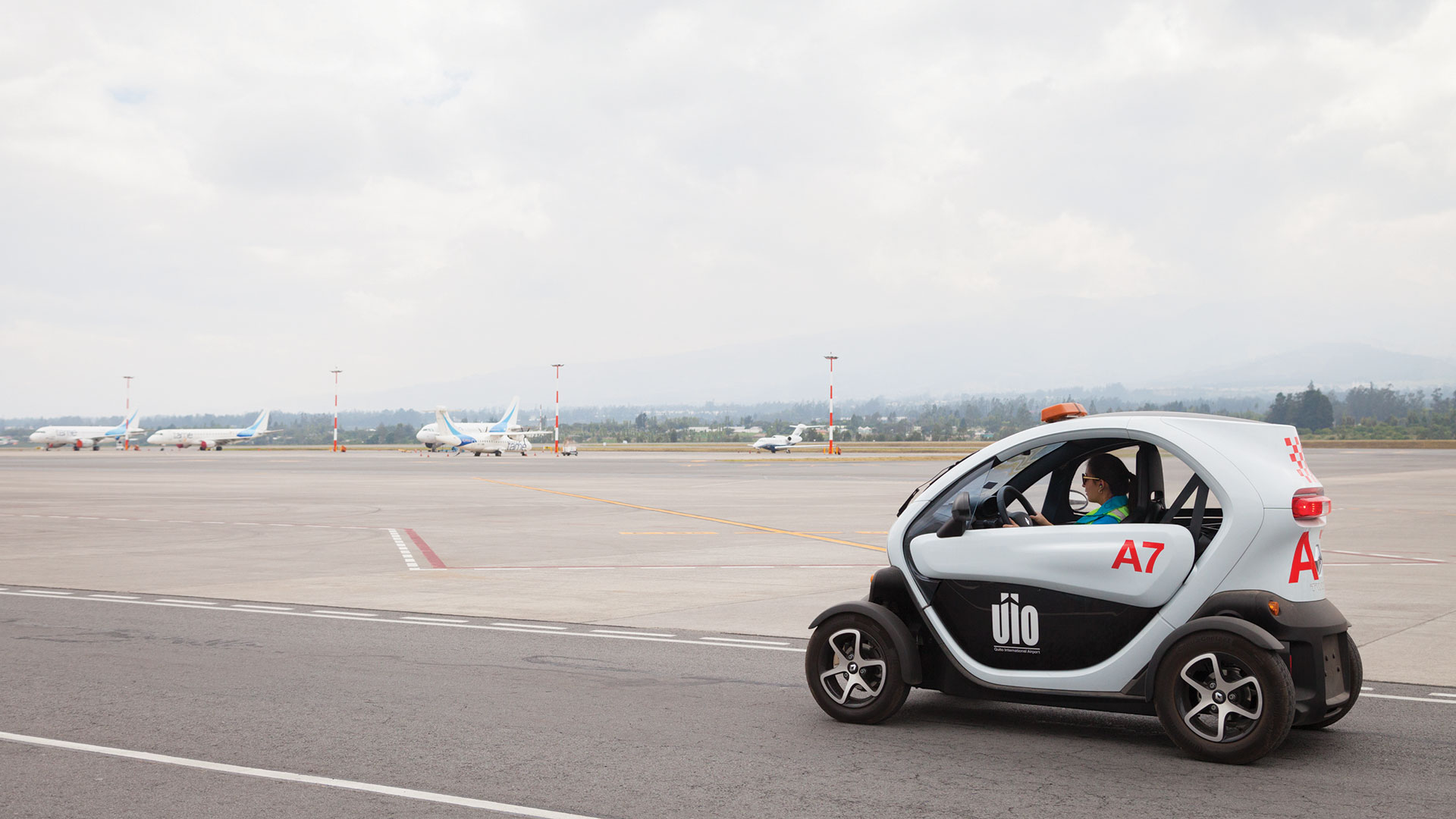 We take care of the environment

Perhaps not all of the world’s airports could answer this last question so easily. But Quito’s Mariscal Sucre International Airport happens to be one of the few airports in the world to have been recognized by the Airports Council International (ACI) for its Carbon Footprint Reduction Program. The aerodrome in Tababela is certified as Level III, joining the airport in Baltra, Galápagos, as the only Ecuadorians on the worldwide list. Carbon emissions were reduced by 14% during the certification program: in 2017 alone, 819 less tonnes were emitted into the environment. The goal now is to achieve carbon neutrality with Level IV certification.

Quiport, the airport’s concessionaire, ensures the airport’s impact on the surrounding environment is kept to a minimum, guaranteeing long-term sustainability.

Quiport has also played a role in bringing various businesses and actors related to its operations together under the aegis of a pro-environment cluster. Over a dozen companies have committed in varying ways to reduce their environmental footprint. The airlines TAME and LATAM will both work on improving their operational procedures and route monitoring systems, for example, while Avianca is committed to the gradual replacement of its lighting systems with LED technology. The Goddard Catering Group, which prepares airplane food, will build and operate a wastewater treatment plant, while the KFC Group will reduce its plastics waste and improve waste disposal. Meanwhile, the nearby Wyndham hotel undertook to install solar water heaters for its hot water supply, and Novacargo will employ movement light sensors in its service areas to reduce electric consumption. Other companies include Servipallet, Petroamazonas, Swissport-EMSA, Meramexair, DK Terra and Pertraly.

Although he’d understandably be blown away by the modernity of the airport and by the speeds of the craft he found there, Humboldt’s sensibility for the planet would no doubt be pleased that Quito’s airport was taking its commitment to the environment seriously and comprehensively.